Why Do They Call It "Mirror Lake"? A Day in Yosemite Valley 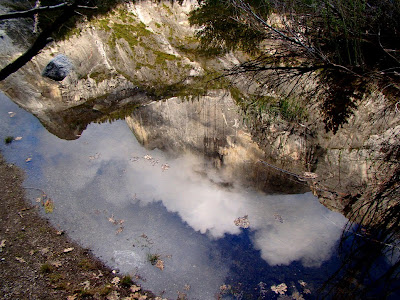 I really can't call today's post part of the "Other California" series because Mirror Lake is probably one of the most photographed spots in Yosemite Valley except for a couple of waterfalls and vertical cliffs. It is a rarer experience than the other iconic places in the valley because Tenaya Creek tends to dry up to a trickle and is not able to flood the area as effectively as it does in late spring, so many summer tourists never get to see it (I've seen many confused people searching for the lake in August). 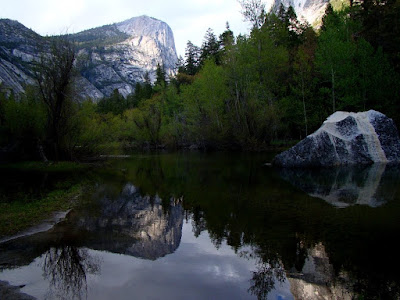 The most famous view of Mirror Lake is the angle that includes Mt. Watkins (made famous by Ansel Adams), but Half Dome looms directly above the lake, and makes for some memorable reflections as well. Mirror Lake is one of the most serene and quiet of the iconic places in Yosemite Valley because automobiles are restricted (only a few handicapped spots), so nearly all who visit get there on bicycles or on foot. 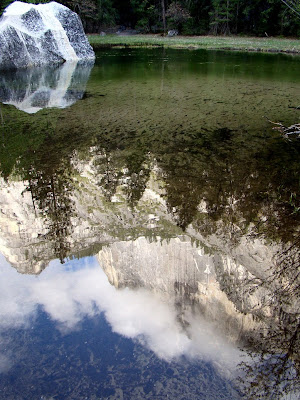 One might be shocked to know that many of the famous corners of Yosemite Valley were once heavily used for other purposes. Some of the meadows were replanted with grasses better suited for cattle grazing so steaks could be served in the earliest hotels. Another meadow near the Ahwahnee Hotel was a golf course until 1981. Swampy areas of the valley floor were drained. And Mirror Lake was once utilized as a source of blocks of ice in the days before electric refrigeration. Because the lake was constantly filling with sand, the Park Service would quarry the sand and use it to spread on icy roads in the valley. The practice ended in 1971. 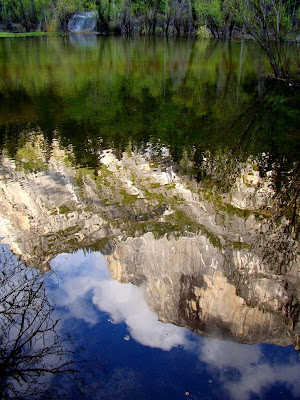 One would expect that sands would fill the lake and it would eventually become another meadow, but the high spring runoff has a scouring effect that maintains a number of permanent pools (at least when the river is flowing). There is also a bouldery dam at the edge of the meadow (below). 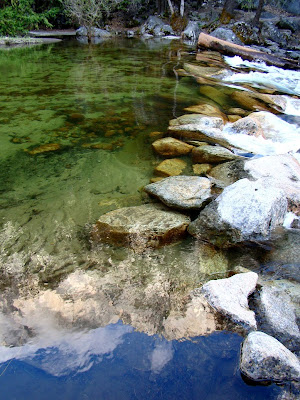 Some notes on the lake:
"The Indian name is commonly given as “Wai-ack”, meaning “water rock,” and was sometimes applied to Mt, Watkins too. Bancroft in his early guide book, and Hutchings, give the name “Ke-ko-too-yem” which they translate as meaning “sleeping waters”. From Yosemite Valley Place Names.

From my geological road guide to Yosemite Valley:

Mirror Lake lies about 1 mile northeast of the road junction next to the moraine. Although it is called a lake, it earns that designation only during periods of highest river flow. The lake formed behind a rockslide estimated at 11.4 million cubic meters, the largest slide so far identified in Yosemite National Park (Wieczorek et al., 1992). The "lake" has been rapidly filling with sand and gravel, and for years the National Park Service attempted to maintain the lake by dredging and by constructing small sediment catch-dams upstream (Ditton and McHenry, 1989). More recently, sediment has been allowed to flow into the lake, and although it is smaller than it once was, some ponding will always be present due to the scouring effect of spring runoff.

Mirror Lake is a beauty. I'm so glad you've gotten to Yosemite to share these sites that I don't expect to see any time soon. Are you going to volunteer there this summer?

Beautiful. Your blog posts on this area are adding up to a desire to go see for myself. Thanks.