The Other California: The Other Side of the Sierra, Down The West Walker River 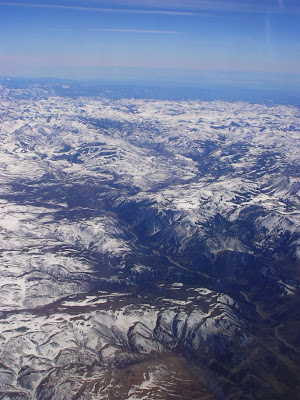 Ask most people their image of the Sierra, and you will hear about Yosemite Valley, Sequoia, granite, and the Mother Lode. Ask them about crossing the Sierra, and they may mention Tioga Pass or Donner Summit. There is a lot more to the Sierra, and this week I am going to highlight some of those places. The "Other California" series is about these kinds of places, the lesser-known spots of geological interest.

There are a total of four paved crossing of the Sierra Nevada between Yosemite's Tioga Pass and Donner Summit. Sonora Pass is crossed by Highway 108 out of Sonora and Pinecrest, and reaches an elevation of 9,624 feet, making it the second highest crossing of the range, just short of Tioga's 9,950 feet. The road drops into the drainage of one of California's little treasures, the West Walker River.

The West Walker is one of the longest rivers in the eastern Sierra Nevada. Most east-side rivers drop steeply and within a few miles disappear into the desert of the Owens Valley or Mono Basin. Because of a structural glitch in the range, the Walker runs mostly north through a relatively unbroken stretch of mountainous terrain before flowing into the Antelope and Smith Valleys in Nevada, and finally ending at Walker Lake, a bit more than 100 miles downstream. 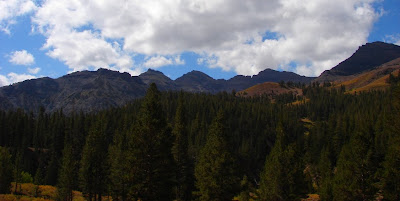 The upper reaches of the West Walker are a bit different than other parts of the Sierra Nevada. The mountains are not composed of granite, but instead are somber red and gray volcanic rocks extruded in Miocene time, around 14-6 million years ago. They are assigned to the Relief Peak formation and the Stanislaus Group. They were originally mapped in the 1950's (by my thesis advisor for one), and are the object of ongoing research today (see below for an example).

Near the summit of Sonora Pass there is an interesting outcrop where the volcanic rocks lie in direct contact with the Sierra granites. There were canyons here that were filled when the volcanoes began erupting. Considering that granite forms several miles deep in the crust, that surface between volcanic and granitic rock represents the disappearance by way of erosion of perhaps four miles of rock between the late Mesozoic around 80 million years ago and the Miocene, about 14 million years. 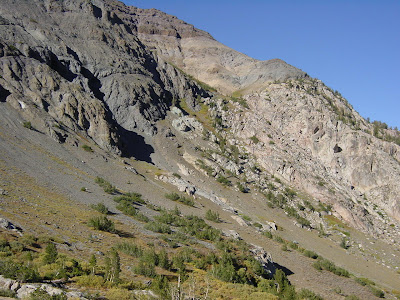 Evidence of glaciation abounds in the high country in and around Sonora Pass. The West Walker River had the longest glaciers of any east-side canyon, with the longest reaching around 20 miles downstream. The Leavitt Valley, below, is a beautiful glacial trough. The main West Walker has its headwaters several miles above the point where the Highway 108 winds down a steep canyon wall. 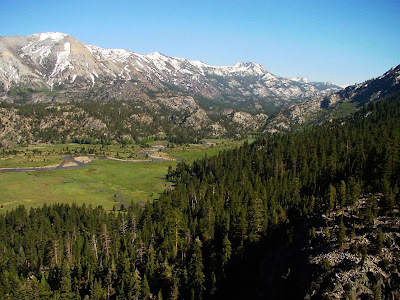 The smaller glacier coming from Sonora Pass could not carve as deep a valley as the main glacier, so it forms a hanging valley, with a pretty cascade called Leavitt Falls visible from a pullout. It's a good spot to stop and let your brakes cool off. As long as I mention brakes, the Sonora Pass highway is not for the faint of heart in its highest reaches. Most cars do just fine, but a big RV would be a nightmare, not just for the driver, but for everyone else who has to make their way around it. In other words, this is one of my favorite paved roads in the state! 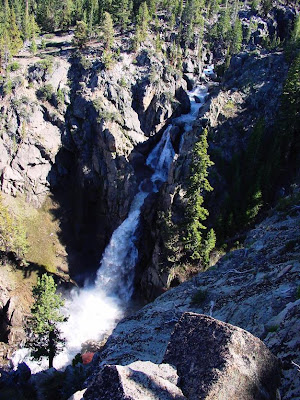 Highway 108 passes the Marine Base at Pickle Meadows and ends at Highway 395. At this point the river has a distinct change of personality, and that will be the subject of my next post.
Busby, C.J., et al., 2008, The ancestral Cascades arc: Cenozoic evolution of the central Sierra Nevada (California) and the birth of the new plate boundary, in Wright, J.E., and Shervais, J.W., eds., Ophiolites, Arcs, and Batholiths: A Tribute to Cliff Hopson: Geological Society of America Special Paper 438, p. 331-378. (Forrest, I assume this is your father?)
Posted by Garry Hayes at 2:09 PM

Gorgeous. That's a rather large unconformity. Sure glad I didn't send yesterday's visitors over 108. Don't think they could have handled it. Great captures and geo story as always Garry.

Wow. You've been inspiring me to take a drive out to the "other California areas". Heh, might have to start with 108 to long valley instead of medicine lake!

my husband used to go to the walker river to fish sometimes - so it was nice to see some of the area/s where he would have been.