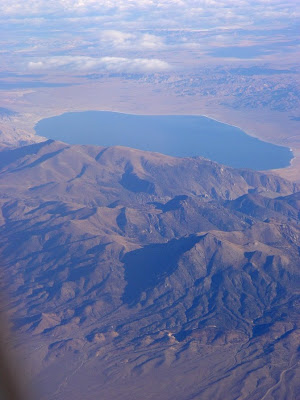 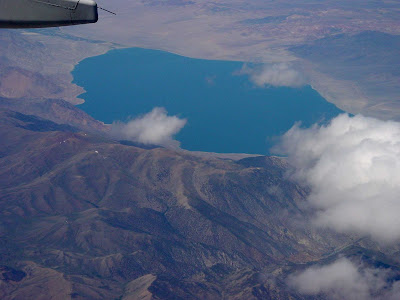 When does a lake die? I know that lakes aren't alive, but at what point does a lake no longer exist as an ecosystem that supports life? The answer to a question like this has multiple layers and complexities. There are many different answers. The Dead Sea in Israel/Jordan is the saltiest inland sea on the planet and nothing more complex than bacteria can survive in its waters. It is about as dead as a lake can get short of drying completely. Oil spills notwithstanding, the disappearance of the Aral Sea in four short decades (due to water diversions primarily for growing cotton) is considered one of the great environmental disasters of our times. What these lakes have in common is that they are terminus lakes. "Terminus" refers not to the fact that they are 'dead', but that these lakes have no outlets, and the only way for water to leave the system is by evaporation. Such lakes have unique environmental problems whether humans are involved or not. 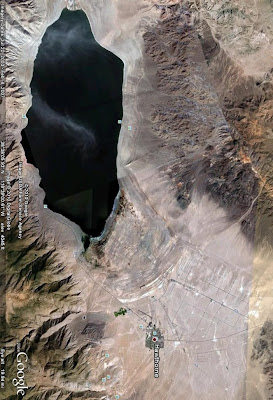 There are several terminus lakes in the Basin and Range Province of the American West. Some of the lakes are famous, for instance, Great Salt Lake and Mono Lake. A few are less familiar, and are the subject of today's post. During the Ice Ages, vast amounts of glacial meltwater flowed into the Basin and Range Province, and except for a very few brief connections to ocean-bound rivers, never flowed out. The fault valleys filled with water, forming pluvial lakes. The biggest, Bonneville Lake, covered much of western Utah, some 10 times the area of present-day Great Salt Lake. Lake Manly filled Death Valley to a depth of 600 feet or more, and was 125 miles long. Possibly the least known lake was Lahontan, which covered a vast area of northwestern Nevada (see the map below). When Lahontan began drying up at the end of the last ice age about 13,000 years ago, just two river systems were big enough to support permanent lakes, the Truckee out of Lake Tahoe, and the Walker River out of the Sonora Pass region. The Truckee supplies Pyramid Lake, while the Walker supports Walker Lake, near Hawthorne, Nevada. 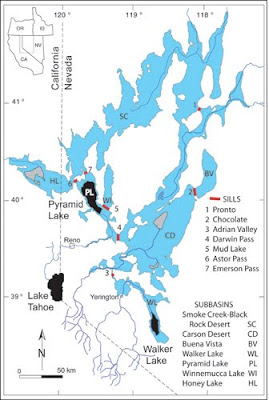 Map from Circular 1267 of the U.S. Geological Survey
Water is, and will always be a contentious issue in the arid western states. If water flows, somebody will have a use for it, and usually there are many somebodies, and the total use of the water will almost always exceed the average yearly flow of the river. Upstream users usually get first dibs to the water rights, and anyone sits at the end of the stream or river is lucky to get any leftovers. Such is the case with the Walker River and Walker Lake.
As outlined in several of the preceding posts, the West Walker River (and an equally interesting East Walker River) flows from the alpine mountains, through practically inaccessible gorges, and then across a series of wide and deep fault basins filled with sediment and fertile soils. The first Europeans to explore the region were after gold and silver. Hot on the heels of the miners came the pioneering ranchers and farmers, and lands were tilled in the Antelope, Smith and Mason valleys (see the USGS land-use map in the diagram below; full-scale map available here). Walker Lake, near Hawthorne, Nevada, was the end of the channel for the Walker River. So much water was diverted for agriculture that the lake level began dropping immediately, from an elevation of 4,083 feet in 1872 to 3,930 feet today. This represents a drop in volume from nearly 9 million acre-feet in 1872, to about 1.5 million acre-feet today. Total dissolved solids (TDS) in the lake increased from 2,500 parts per million in 1882 to about 16,775 ppm today, mostly in the form of salt (seawater has about 35,000 ppm). The lake that remains is 12 miles long, 5 miles wide, and only about 78 feet deep. 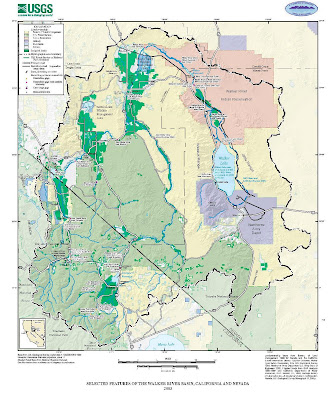 So, why worry about a 'dead' terminus lake in the middle of the desert? It's just that it wasn't, and isn't yet dead. There were four native species of fish living in the lake when settlement began: the Lahontan cutthroat trout (Oncorhynchus clarki henshawi), tui chub (Gila bicolor), speckled dace (Rhinichthys osculus), and Tahoe sucker (Catostomus tahoensis). Other species were introduced later on and thrived at first. Today, only one native species still survives in the lake waters, the tui chub, but it's continued success at reproduction is now in doubt. The original race of Lahontan cutthroat trout disappeared, but a different population was reintroduced, and is hanging on for now. 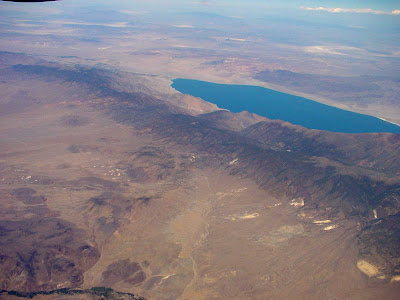 These fish, and the various forms of algae, diatoms, and insects in the lake are the basis of a complex food chain that includes thousands upon thousands of local and migratory birds. Mono Lake, with a much higher concentration of salt, hosts a food chain as well, but it involves only brine shrimp and brine flies to feed the birds, because nothing else can survive the waters. Walker Lake is a far more diverse system, but that diversity is ever more threatened.
Terminus lakes like Walker are highly sensitive to climate change. During the ice ages, the lake was a part of a huge freshwater lake that stretched across northwest Nevada. At other times the lake dried or nearly dried up with TDS much higher than seawater. The ecosystem of the lake responded to those changes, and when fresh water dominated, fish and other creatures would re-colonize the lake from their refugia in the Walker River or in freshwater springs within the lake. What has changed during the human history of the lake is the introduction of contaminants from mining or agricultural runoff, and the rapidity of the dessication of the lake.
Efforts are beginning to try and stabilize the situation at Walker Lake, mostly in the form of purchasing water rights from upstream users to increase the flow of fresh water in the downstream parts of the river. You can find out more here. A detailed analysis of the ecosystems of the entire Walker River system can be seen here. If I were a TV reporter, I would be closing this post with the words "Time will tell". But it doesn't seem that there is a whole lot of time.

One last, and totally unrelated note. If you look closely at the Google Earth image above at the terrain around the town of Hawthorne, you can see a network of roads and widely spaced buildings. It's an eerie place to visit, especially if you are a child of the Cold War era. The buildings are ammunition bunkers, widely spaced so that an atomic bomb couldn't destroy them all at once. The first time I visited, I felt like I was at the center of a giant bullseye target.
Posted by Garry Hayes at 3:47 PM