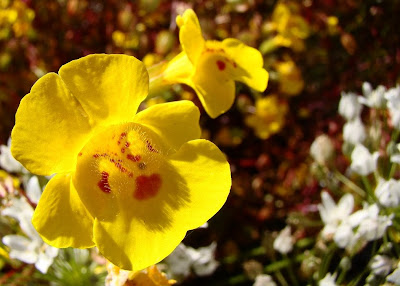 In late March, I paid an early spring visit to a unique geologic locale in the Mother Lode of the Sierra Nevada, the Red Hills Area of Critical Environmental Concern, which is such a better moniker than such things as "park" or "wilderness". So much easier to say or write! It was an ideal example of the "Other California", those places that never seem to show up on the postcards. At the time, we were enjoying the early blooms of the many endemic and unusual flower species growing on a serpentine soil that prevents the usual grasses and oak trees from flourishing. 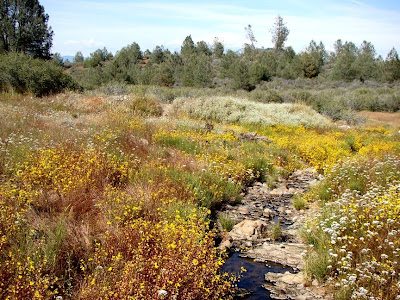 There was still a lot of daylight left, so we figured why not head up towards the high country and figure out was blooming up there? So we jumped onto Highway 120 towards Yosemite National Park. As tempting as it was, by the time we reached the Rim of the World Overlook, it was nearing 6:00 PM, and Yosemite itself was out of the question (that trip will have to wait a few days). 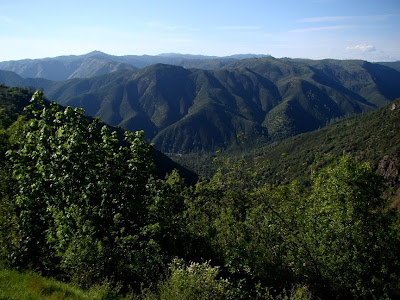 The Rim of the World Overlook provides a rather spectacular view into the vast gorge of the Tuolumne River, which cuts into the westward tilting block of the Sierra Nevada province. The Tuolumne had the longest glaciers during the ice ages, but they never reached this far. This is a river-carved canyon. 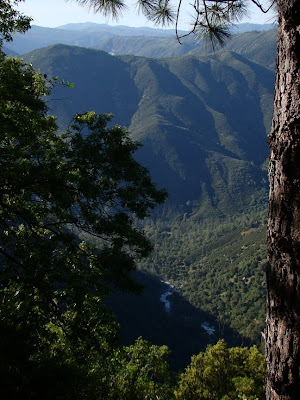 The two forks of the Tuolumne meet below the view point some 1,500 feet below, but the rivers could be clearly heard. The viewpoint lies very close to the boundary between the granites of the Sierra Nevada batholith and the early Paleozoic metamorphic rocks of the Shoofly Complex, one of the oldest rocks found anywhere in the Sierra Nevada.
By the way, yes, there were a great many flowers to be seen at the 3,000 foot level of the Sierra. The highway was bedecked in many places with purple and white lupine, with the occasional splashes of red Indian Paintbrush. The scene below was just off the upper end of Ferreti Road, which winds through a resort complex at Pine Lake near Groveland. 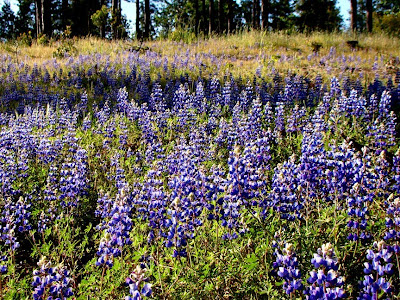 We capped off the evening with a nice selection of Mexican cuisine at Alfredo's in Sonora, a small restaurant that I recommend!
Posted by Garry Hayes at 10:27 PM

Wow Garry, the spring bloom is prolific. Do you have Darlingtonia growing on the serpentine? Love that view. Yosemite soon, right?