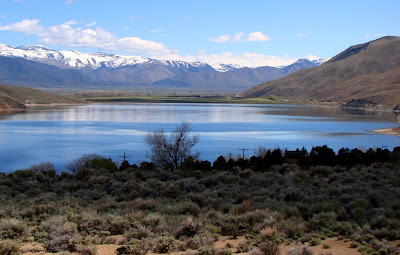 I thank my father for the title, which derives from a college term paper he wrote many years ago, although today's post is about a different place, Topaz Lake, on the border of California and Nevada just east of the Sierra Nevada province. It lies at the north end of Antelope Valley, which I explored in the previous post in my series on the "Other California". I also thought of calling this post "A River Runs Through It (but not exactly)".

Antelope Valley is a half graben, a valley formed as movements dropped the valley along a curving fault surface, forcing the West Walker River to flow along the mountain front. The fault system becomes complicated at the north end of the valley and some low peaks, the Gray Hills, interrupt the otherwise flat topography of the valley floor. 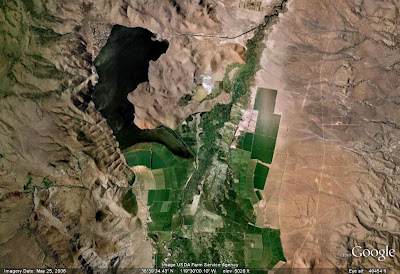 Prior to 1921, the basin between the Gray Hills and the Sierra was occupied by a dry lake bed called Alkali Lake (or Rickey Lake). The West Walker River was blocked from flowing into the lake by the alluvial fan that had built out from Slinkard Creek (at the bottom of the GoogleEarth photo). Early ranchers in the region, especially the owners of the vast Rickey Ranch, wanted better control of the water for irrigation purposes, and devised a scheme to divert the West Walker into Alkali Lake for storage. Their plans precipitated a water war with other ranchers, especially California cattle baron Henry Miller downstream and the litigation eventually reached the Supreme Court. The Rickey Ranch lost, but ironically the other ranches decided he had a great idea, and a levee was built to divert the river into the dry lake bed. A tunnel was built at a low point in the Gray Hills to control the water level. So, Topaz Lake is a reservoir without a dam! The reservoir has about 65,000 acre feet of "dead water" and about 59,000 acre feet of usable storage space. The outlet tunnel is at the low point in the hills on the far side of the lake in the picture below. 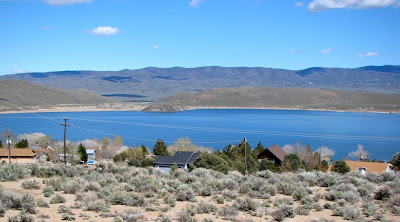 The flood of 1997 keeps coming up in my recent posts. It was an extraordinary event in which the river peaked at almost double the size of all previous floods, at 12,000 cubic feet per second. This flood, and an earlier smaller event in 1986 revealed a serious weakness of the reservoir system. Because of channel blockages below the diversion, there was no way to stop floodwaters, and especially debris from flowing into the lake, causing the lake to rise far above normal levees, and flooding some residential areas. Modifications to the levee system are currently being made (the inlet canal is marked by the line of Cottonwood trees in the picture below). 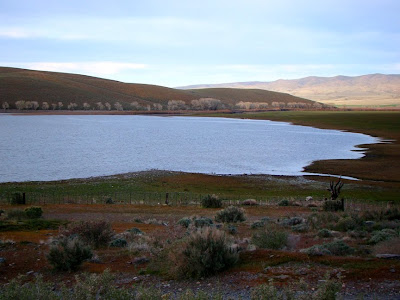 Topaz Lake today is fishing destination, and if you are one of those really desperate gambling junkies, it has one of those casinos that sits almost on the state boundary with Nevada. It also has some nice views of the mountains, and now that you know what you are looking for, it is a wonderful place to see the results of some heavy duty fault action.

One more post to go on the West Walker River series. The next post will involve the end of the river in Nevada, but the repercussions extend into our fair state of California.
Posted by Garry Hayes at 1:39 PM