It's a bird! It's a flying dinosaur! It's...neither. Oh, and Abraham Lincoln was President of China 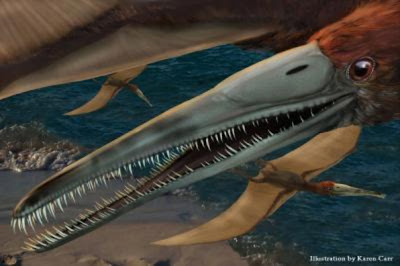 Pterosaurs from Ptexas! This article describing the new discovery is headlined "dinosaur", and is categorized under the "dinosaur" section of the paper's science division, but never mentions dinosaurs in the the text. And it shouldn't have. It turns out to be a well-written article about the discovery of a new pterosaur species with a 9-foot wingspan that used to soar over the Dallas, Texas region. The pterosaurs were a separate line of flying reptiles: they weren't dinosaurs at all. I did notice that a Google search of the new pterosaur Aetodactylus halli produces many stories of the discovery, and only a few make the dinosaur mistake (I'm afraid Fox News made the bad list, too). Unfortunately the Telegraph comes into criticism because it was the first story I saw, and I had to go looking for the others.
So, what's the problem? These pterosaurs lived when the dinosaurs did, and you invariably find one in the plastic dinosaur toy kits (along with sabertooths, mammoths, and cavemen). But morphologically they are descended from an entirely different group of Paleozoic reptiles. From a paleobiologist's point of view, you might as well call kangaroos placental mammals instead of marsupials. If this were an article about human history, it would be like saying that Abraham Lincoln was the president of China, or that Napoleon fought the battle of Waterloo in Florida. A newspaper editor would never let those headlines get printed, but the dinosaur mistakes happen all the time.
The only dinosaurs with nine-foot wingspans are the ones flying around southern California and the Andes right now. This is because birds are the creatures most closely related to dinosaurs still in existence.
Posted by Garry Hayes at 7:27 AM

You think that is bad. I have just had to chastise the UK's Science Learning Centre for releasing an article (now withdrawn) for science school teachers implying that Iceland's volcanoes are subduction related.

I just read about the pterosaurs being bigger than our condors. They may lived at the same time in TX.