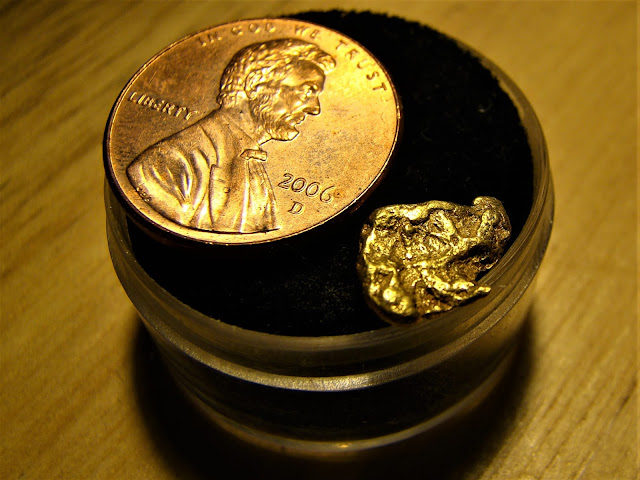 All that glitters is not gold...and even if it is gold, there's no way I would pass a large nugget of it around the lab, no matter the teaching value of something that could illustrate density so well. That's hardly an issue of course, since the largest sample of gold that I have is only a gram (about 1/28 of an ounce). You can feel the heaviness a little, but not really. There's also a sample of crystalline gold, but it is so small that you can't really feel the weight of it at all. 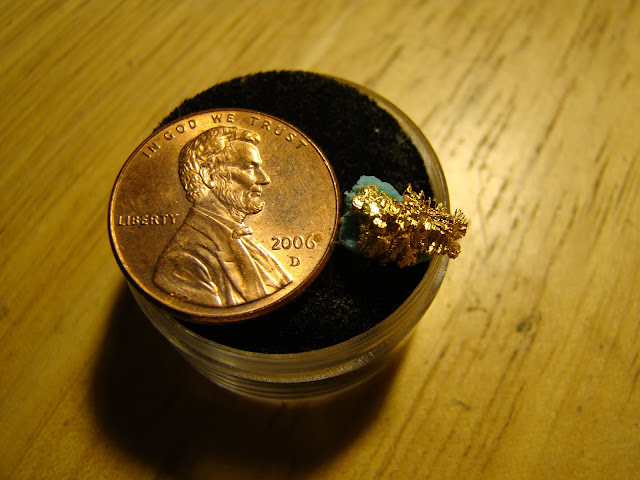 Still, it would be nice to have a sample like gold around in the classroom to provide a tactile example of extreme density. But even a single ounce of gold is just not feasible.

The density of a mineral is the ratio of mass to volume, often measured as grams per cubic centimeter. The higher the density, the heavier an object will feel. In a physical geology laboratory on minerals, we refer to the density as the "heft" of the mineral. In other words, does the mineral feel heavier or lighter than expected? We tend to expect metals to be heavier, and translucent or transparent minerals to feel lighter. Water has a density of 1 gram per centimeter, and most non-metallic minerals have a density of between 2.5 and 3.5. That is therefore close to the density of many rocks, since rocks are composed of a solid mixture of minerals most of the time.
Galena, a sulfide of lead, is one of the densest of the reasonably common minerals, at 7.6 grams per cubic centimeter. Pyrite (otherwise known as fool's gold) is also relatively dense at 5.02. But none of those minerals come anywhere close to the density of the heaviest metals. 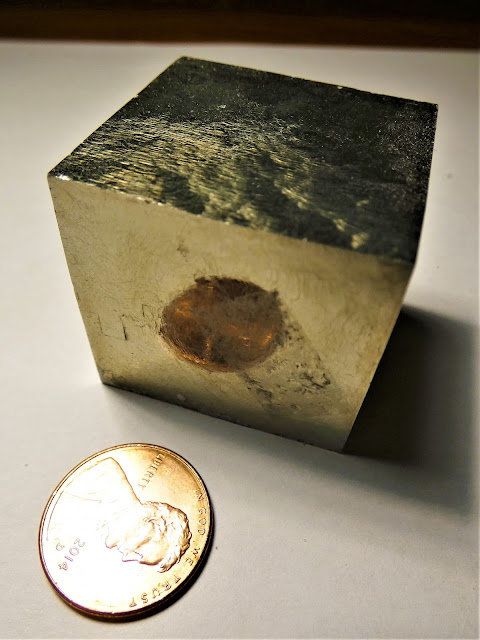 So why not some chunks of common metals? I have a 1-inch sphere of copper in the classroom and several samples of native copper. They're fairly hefty at 8.92, but that's barely ahead of the mineral galena. Iron is even less at 7.87. Silver and pure lead are getting up there at 10.49 and 11.34 respectively, but the toxic nature of lead is well-known. What I would hope for is something really heavy, among the most dense of all the metals.
What are those densest metals? And are any of them useful or appropriate for a classroom? Here are the ten densest metals:
It's an interesting list. I've wondered if any of them could ever be considered as a classroom demonstration model.
Mercury is the kind of stuff that kids aren't allowed to play around with for clear toxicological reasons, but in the days of my youth, it was far more accessible, but no less toxic. I had a toy once, a maze that had a bead of mercury in it that you would tilt back and forth. In high school, the chemistry lab storage area had a plastic flask containing several pounds of the stuff. The kids had full access to it if the teacher wasn't paying attention. It's amazing that any of us made it to adulthood, and mercury poisoning perhaps explains some of the strange quirks of my generation.
Americium is unique, as it only exists in human-made form. It's not found in nature, but it is probably present in your fire detector. Even if it were in a mass large enough to feel, it is clearly not appropriate for a classroom demonstration of heft!
Platinum, iridium and osmium are the densest of all, but all of them are rarer and more expensive than gold. They're out of the running in my lab...
Plutonium and neptunium are both highly radioactive and not natural to the Earth except in extremely small amounts. It is of note that I got to use some plutonium once in a chemistry lab. We irradiated something (copper, I think) with plutonium, and then recorded the decline of the radiation on a graph to better understand the concept of radioactive half-lives. The plutonium was highly shielded, however. We couldn't even actually see it.
There isn't much left, is there? Uranium seems a possibility in some respects since it is used in depleted form in weapons and armor. "Depleted" refers to the fact that it has been processed to remove the most radioactive isotope (Ur235, used in weapons. Isn't that comforting?). The Ur238 is less radioactive, but it is still radioactive. I got to hold a 1-lb slug of uranium once, and wished I could have one for the classroom, but it just isn't going to happen.
So it comes down to one last metal in the top ten, and example of how one can learn things even at such an advanced age of my own. I've known about tungsten for a very long time. As a teen I hiked through the grounds of Pine Creek tungsten mine in the Sierra Nevada that once provided more than 90% of U.S. production. Over the years I've enjoyed searching for the principle ore of tungsten, a unique fluorescent mineral called scheelite. I've known for years that it was used as the filament in incandescent light bulbs, and that it was alloyed with iron to make a stronger armor. But something I did not know until last month was that pure tungsten is denser than gold!
It's not only denser than gold, but it is not particularly toxic except in rare instances. And it's not overly expensive. I got a sample cube a half inch on the side for a few tens of dollars online, and ever since it arrived last week it has been my newest 'worry' stone. I can't help but heft it and realize that at long last I have a sample to demonstrate extreme density in the laboratory.
That is, if I ever get to have a laboratory class again. I'm getting really tired of the pandemic.
Posted by Garry Hayes at 8:19 PM 6 comments: