A Reminder of What Once Was: An Evening at the San Joaquin River National Wildlife Refuge

What is it like to see ten thousand birds take to the sky all at once? Do you have to live on the African Savanna to find out? Sometimes one has to merely look in one's backyard (so to speak) to rediscover the extraordinary nature of where one lives. For instance, my home is in California's Great Valley (called by some the Central Valley). The valley is sometimes derided as a boring place to live, an endlessly flat expanse of agribusiness farms and poorly planned urban centers, and there is certainly a truth to that idea. A full 95% of the valley has been altered by humans from the original prairies and wetlands.

But the other 5%? Astounding at times. 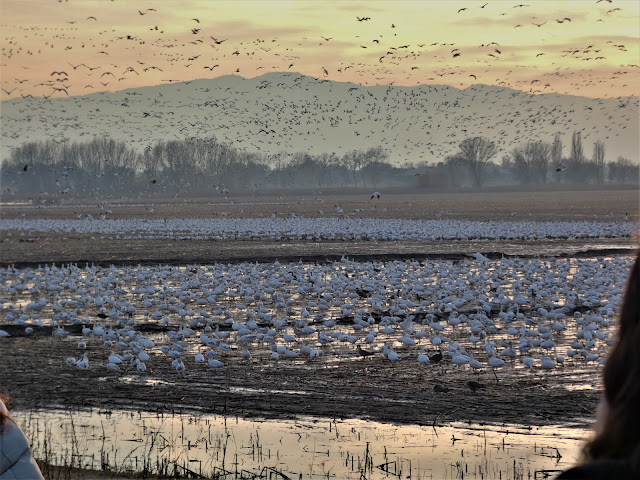 The valley was once an expanse of open prairies, riparian corridors, and vast shallow lakes. A diverse fauna grazed the flatlands, Tule Elk, deer, antelope, horses, camels, bison, mammoths, mastodons, and giant ground sloths. They were preyed upon by a fearful assemblage of carnivores: Saber-toothed Cats, Jaguars, American Lions, Dire Wolves, Coyotes, Black Bears, Grizzly Bears, and huge Short-faced Bears (nothing else was short about them; they stood 12 feet tall). Much of the megafauna disappeared around 10,000 years ago for reasons that are still debated, but the valley still supported a healthy ecosystem when the European colonizers arrived and started changing things. 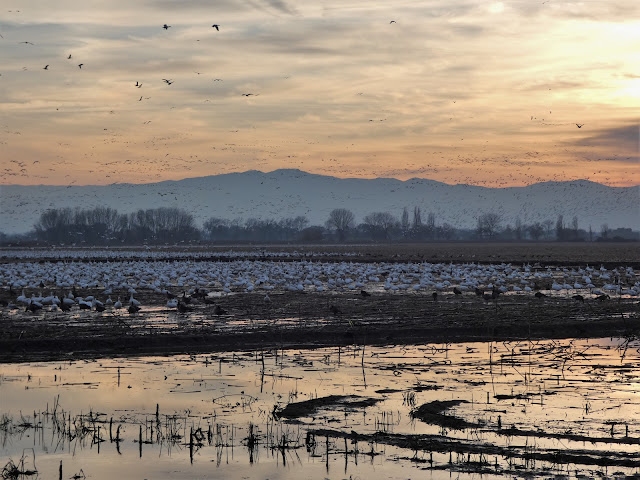 The valley supported millions upon millions of migratory birds. The valley for a variety of reasons has some of the mildest winter weather in North America, and arctic species for millennia utilized the wetlands for a winter home. Agricultural development deeply altered the available habitat and the birds suffered for it, but a string of wildlife refuges were established decades ago to help them survive. I'd love to say it was for preserving the natural habitat, but it was often to provide the birds a place where they wouldn't destroy crops, and to provide hunters a dependable target. But still, the refuges are islands of relative safety for the birds, and many species have thrived.
The Aleutian Cackling Goose was once thought to be a subspecies of the similar Canada Goose, but they are now considered a distinct species. They were decimated by changes in their winter refuge, but also in their breeding grounds in the Aleutian Islands, were introduced foxes had exterminated most of them. By 1936 they were thought to be extinct. In 1962 a few hundred were found on an isolated island, and they received protection under the Endangered Species Act in 1973. Since then their numbers have rebounded, with a population today of nearly 200,000. And a very large percentage of them spend their winters only eight miles west of the biggest shopping center in my town. 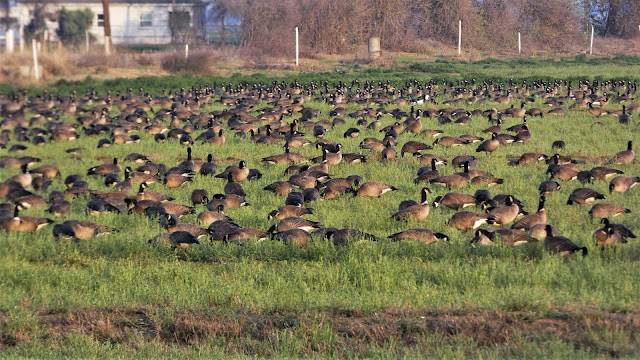 We had a package to pick up at that shopping center today, so Mrs. Geotripper and I decided to run out to the viewing platform on Beckwith Road west of town. The platform overlooks the fields of the San Joaquin River National Wildlife Refuge. I have visited the spot dozens of times in the last six years, but I had never seen so many birds as were there this afternoon. I made a rough estimate of 4,000 Aleutian Cackling Geese, as well as around 12,000 of the white Snow and Ross's Geese. And as we watched, a large percentage of the geese took flight, which I caught in the video at the top of the post. It was an astounding sight.
It's not just geese that call the Great Valley their home. There are a large number of other strange and exotic birds that can be found here. This evening we saw some other interesting species. There was a flock of 200 or 300 Long-billed Curlews in a field north of the road. They have impossibly long beaks for exploring the mud for worms and bugs. 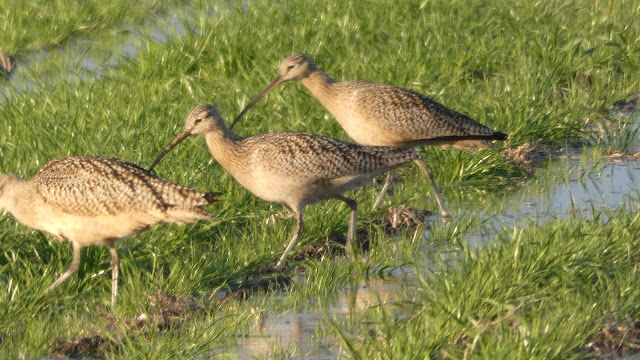 There was also a flock of around a hundred White-faced Ibises. They look very dark from a distance, but closer observations reveals a colorful iridescence. The white face only shows up in breeding season. They are unique to the Americas, and apparently evolved from the far more widely distributed Glossy Ibises.
I've lived in the Great Valley now for more than thirty years, and I've long extolled the fascinating geological story of the valley, including the extensive fossil record, but I was appallingly ignorant of the fascinating species that still call the valley home today. I had never seen the tens of thousands of geese take flight all at once until around six years ago. I now look forward to the privilege with the approach of every winter season.

The Conjunction Station in the Red HIlls: A Report, and a Santa Claus Sighting

The weather gods decided to make things difficult for us in regards to the rare celestial event that took place tonight. We finally got rain last week, and when the rain comes to the Great Valley of California, the Tule Fog follows. Earlier this week the fog cleared in the late afternoon allowing me to get a few experimental shots of the approaching conjunction, but the fog has not relented for two straight days. If we were going to see the Jupiter-Saturn conjunction (the closest approach visible in 800 years), we had to do something a little drastic. We headed up into the Sierra Nevada foothills to get above the inversion layer that traps the fog at low elevations.

I knew of a likely spot in the Red Hills Area of Critical Environmental Concern near Chinese Camp that would have a good view. We got there a bit before sunset and set up our gear.
I don't have fancy astronomical gear. I borrowed the old Questar telescope that we keep in the department at the college, and brought my own Panasonic Lumix point-and-shoot (but with the 60x zoom; good for my birdwatching). Lacking any attachments, I used my phone to snap shots from the telescope lens. 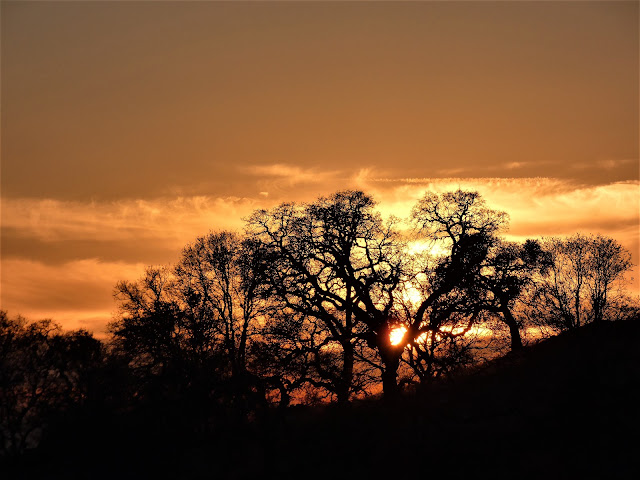 You've maybe noticed that it is easier to identify an oncoming car in daylight, since the headlights overwhelm the details in darker conditions. It's like that when viewing planets. The first picture above was taken as soon as I could see the planets in the darkening skies. The rings of Saturn are clearly visible (and in fact this was the first time I've ever captured a distinct view of the rings with my camera). Later in the darkness I took the picture below and the planets are too bright to see the rings well. On the other hand, three of Jupiter's moons are visible. There's always a tradeoff! 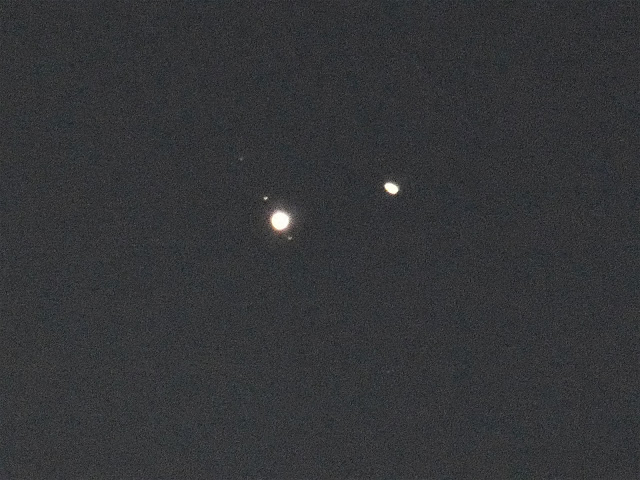 I guess we shouldn't have been surprised that a bunch of other people had the same idea of coming to this particular spot, but they were doing the right thing and masking up and keeping to their own groups. I had to wonder though if we weren't in the presence of a rather famous person... 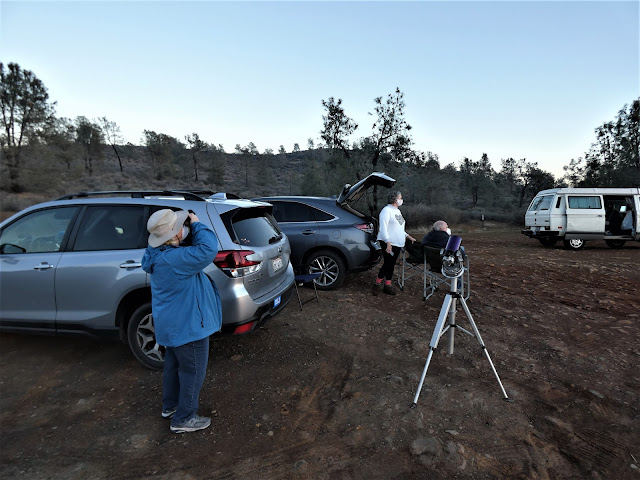 You'll have to be the judge, but the man's telescope is red, and presumably could pass for a giant candy cane. And he doesn't really have to work for another couple of days... 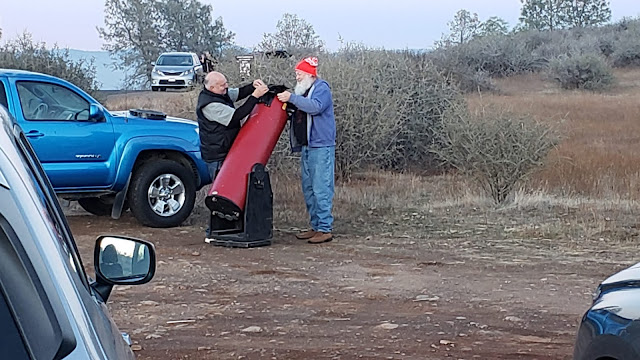