How It Was Today: Fall in Yosemite Valley 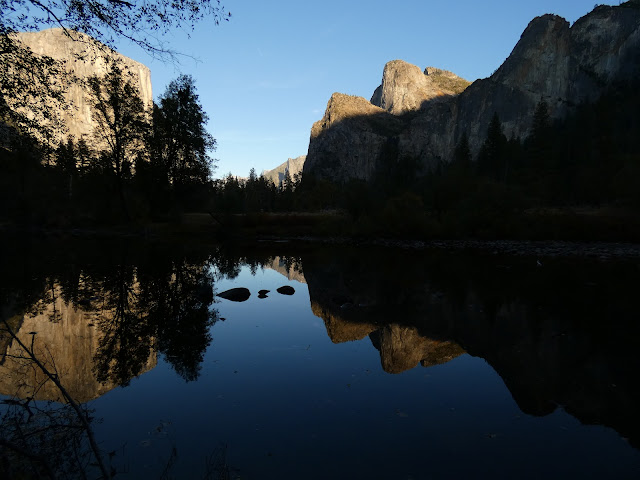 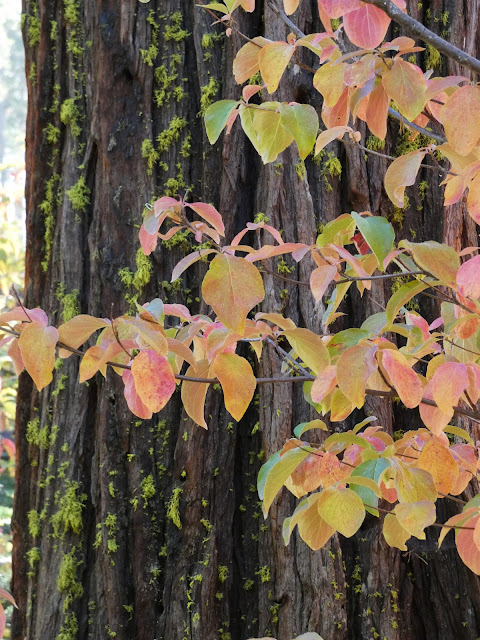 I woke up late this morning. Mrs. Geotripper was finishing breakfast and asked if I'd like "to go up the river a little ways and find some fall colors". I had lots of grading to get through, so obviously I said yes, and around 11 or so we jumped in the car and headed up the Tuolumne River to see what we would find. There wasn't much, at least not in terms of fall color. So we went a little farther... 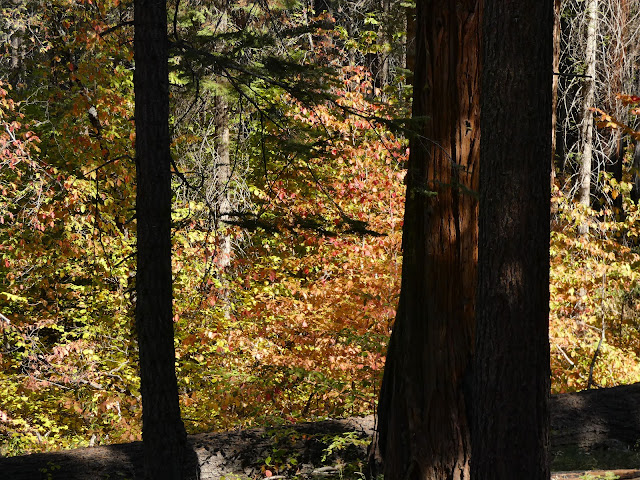 We followed Highway 132 up past Coulterville and on to Greeley Hill at a bit above 3,000 feet. Still not much in the way of fall color. So we went a bit farther up the hill and found ourselves at the Yosemite National Park entrance station at Big Oak Flat at 4,000 feet. We finally found a bit of color, although not at the intensity that a few more days of cold weather might bring. 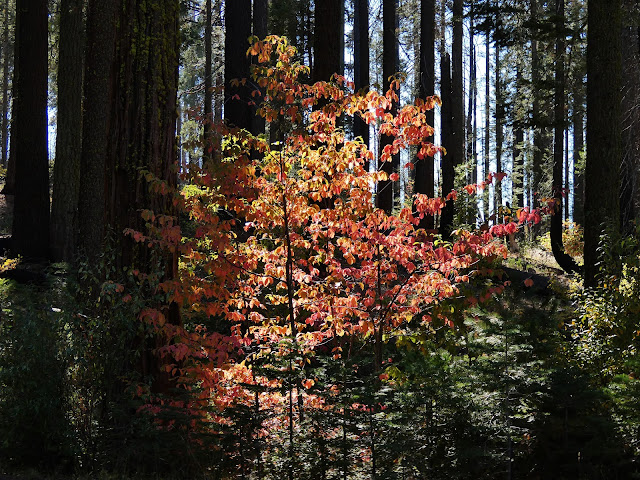 And we had made it this far, and Yosemite Valley was only 15 miles away. How could we pass it up? 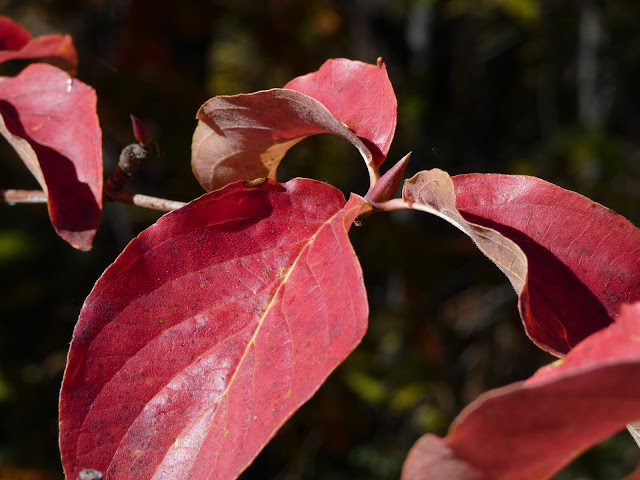 So on we went into the awesome gorge of the Merced River and into the valley itself. There was the first look at the distant cliffs of El Capitan (left), Half Dome (center), and Sentinel Rock and Dome (right). 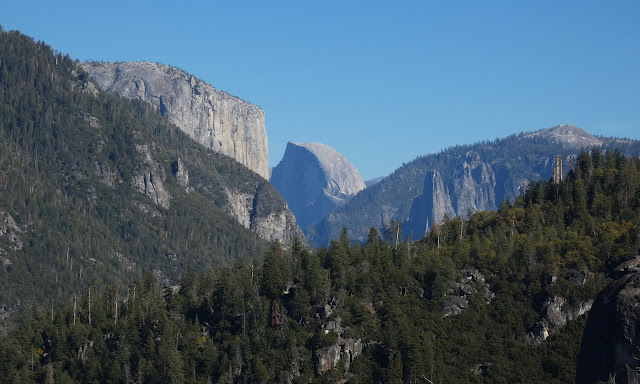 Closer at hand were a lot of ripening acorns. The bears and woodpeckers will be happy. 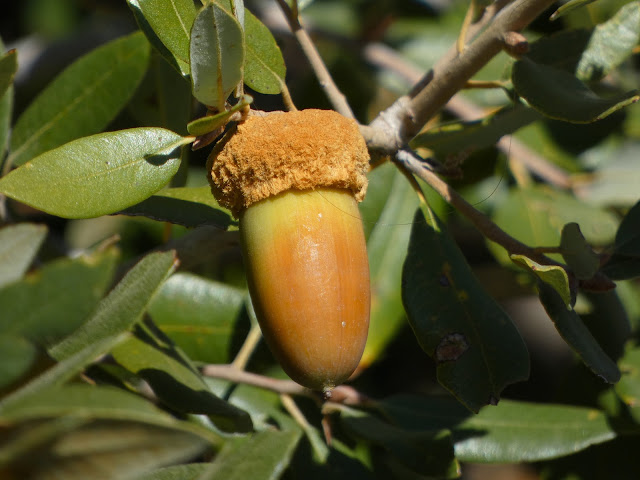 We reached the valley floor and started our tour of Yosemite's greatest hits. We were surprised to find some wispy curtains of water flowing over Bridalveil Falls. The 620 foot-high waterfall is a classic example of a glacial hanging valley. The main trunk glacier flowing through Yosemite Valley was able to erode a much deeper trough than the small glacier in Bridalveil Creek, so the floor of the creek was left hanging high above the main valley floor. 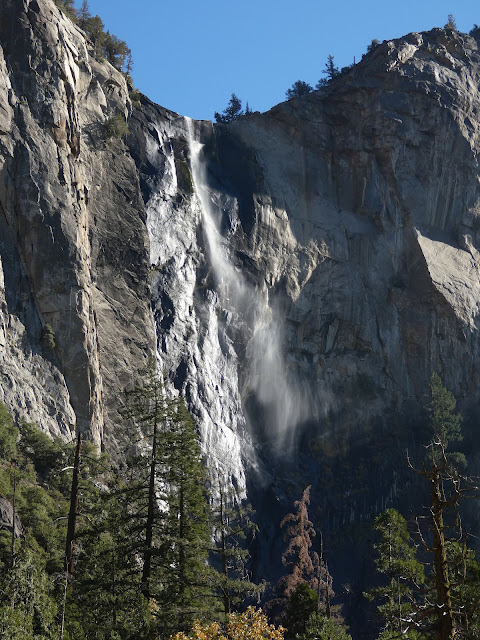 It was not a cold day, mostly in the sixties, but the sun was intense. It brought out what colors there were in the oaks and dogwood trees. 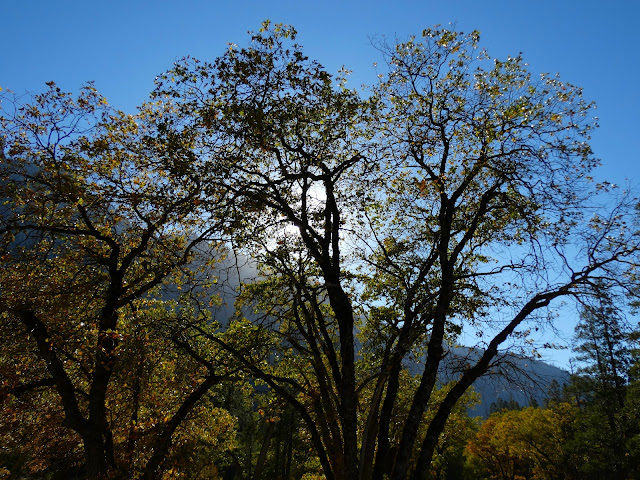 We didn't see a great many varieties of birds, but there were some Acorn Woodpeckers busy collecting acorns and hiding them in tree "granaries". Such trees can have tens of thousands of drilled holes that can hold a single acorn each. The birds live in loose family groups who search for and guard their food supplies. 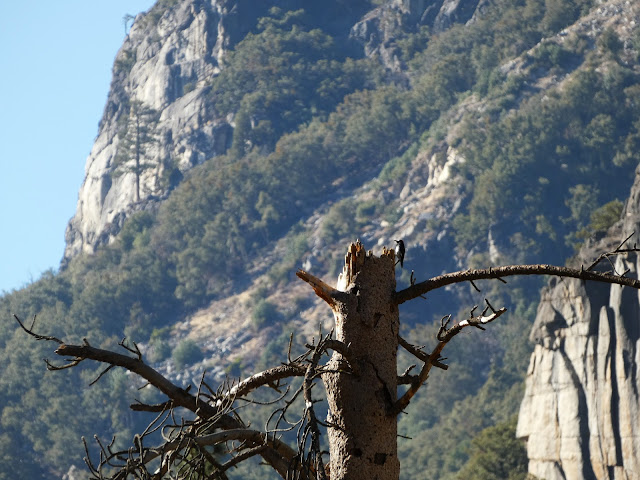 Yosemite Valley is not a 'typical' glacially-carved valley. Most such valleys have a U-shaped profile, and are relatively straight. Yosemite Valley is characterized instead by bold cliffs that extend out into the valley with dark recesses in-between. This is the result of having eight distinct intrusions of granitic rock, ranging in composition from 'true' granite to granodiorite, tonalite, and diorite. They differ from each other in the proportions of the minerals quartz, potassium feldspar, and plagioclase. They also vary in the amount of dark minerals they contain including biotite mica, hornblende, and a little augite. They also vary in their pattern of fracturing (jointing), and this is expressed in differing vulnerability to erosion by ice, water, and mass wasting (landsliding and rock falls). 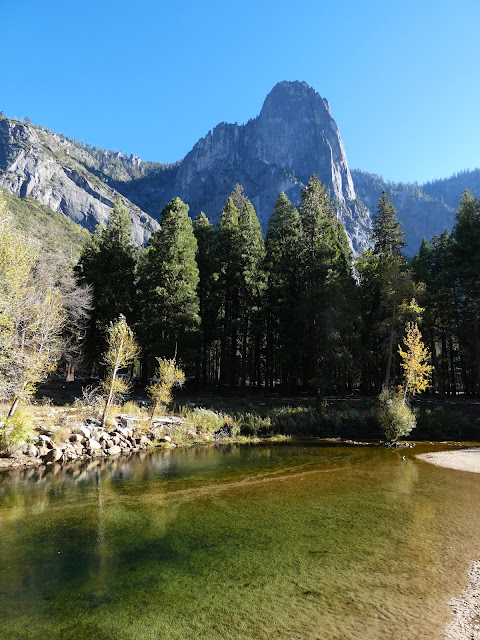 Sentinel Dome (above) is a good example. It is composed of fairly resistant Sentinel granodiorite, but it is jointed and thus forms a somewhat narrow high cliff that looms over the valley. 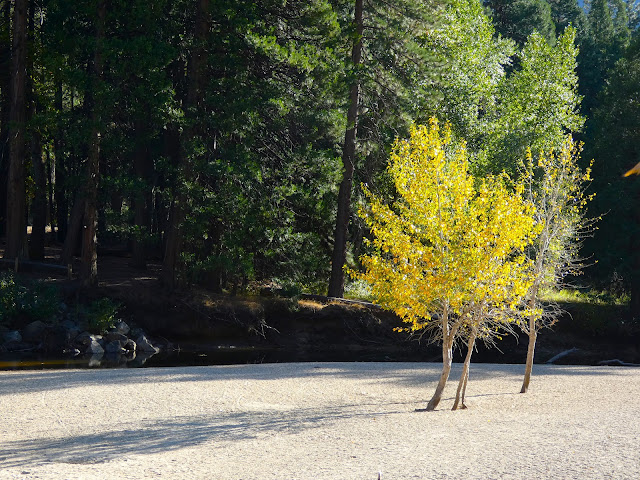 Yosemite Point on the other hand is composed mostly of unjointed El Capitan granite and forms a wide bold cliff. Sometimes people sort of 'miss' this incredible cliff because much of the time there is a stunning waterfall pouring off the west flank of the precipice (the dark mark on the left side in the picture below). That waterfall is only fifth or seventh highest waterfall in the world, and is known by the moniker of Yosemite Falls, measuring in at 2,425 feet. It wasn't actually dry today, but one needed binoculars to see the small trickle at the top of the cliff. 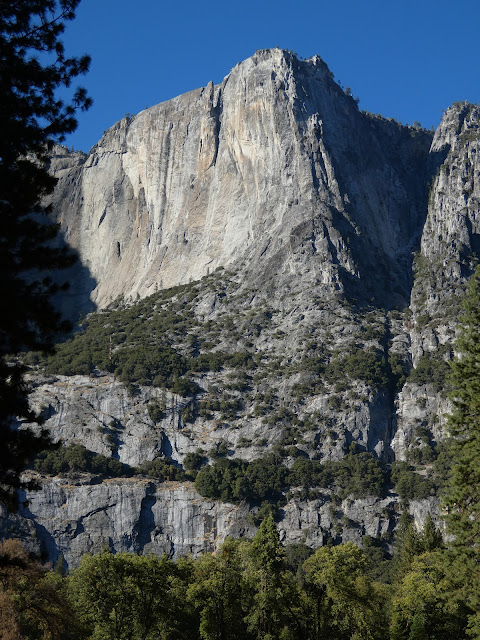 The autumn season is one of the best times to view Half Dome from the middle of Sentinel Bridge. The Merced River is flowing at a low ebb and the still waters make for memorable reflections. Half Dome is another example of an unjointed monolith of granitic rock called the Half Dome granodiorite. It is the youngest of the igneous intrusions exposed in the valley, with an age of about 84 million years. The Sentinel granodiorite is about 88 million years, and the El Capitan granite around 103 million years. These dates fall within the Cretaceous period, which means that when these molten masses were intruding the crust, there were dinosaurs wandering the surface four or five miles above. The dinosaurs would have experienced occasional volcanic eruptions when some of the intruding magma escaped to the surface.
In the years since, erosion has removed the miles of overlying rock and dumped it into the Central Valley or the waters off the coast of ancient California. The region seems to have been eroded to a low elevation landscape that was later uplifted to form the modern Sierra Nevada. 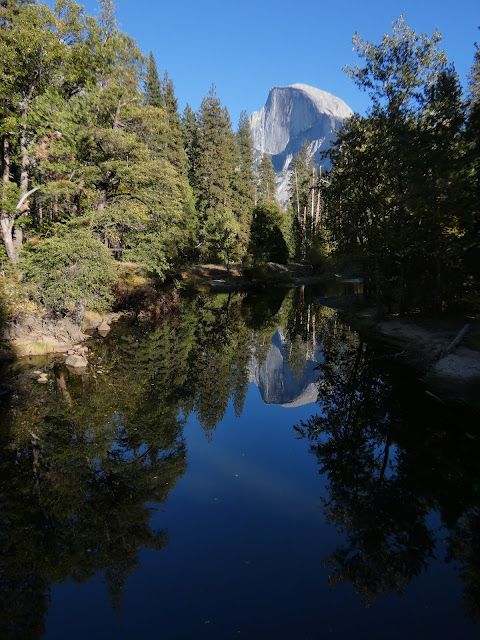 We wandered around Cook's Meadow and stopped into the store at Curry Village to replenish my t-shirt collection. The sun was starting to get low, so we made our way west to our favorite evening viewpoint, Valley View. 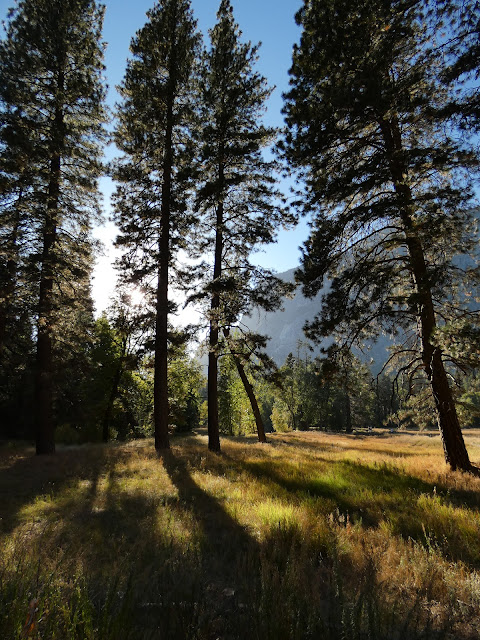 Valley View is almost a secret to Yosemite visitors because it has a small parking lot (maybe room for ten cars) at a blind curve so that if you are in the right-hand lane you might miss it. Since the road is one-way at that point, you would have to repeat a five mile loop to get back. The small parking lot is a blessing because it limits the size of the crowd. It's a quiet spot to enjoy the fading light on the cliffs of El Capitan and the Cathedral Rocks. The river usually flows slowly here making for memorable reflections of the cliffs above. We enjoyed the few moments of peace, and then headed home. 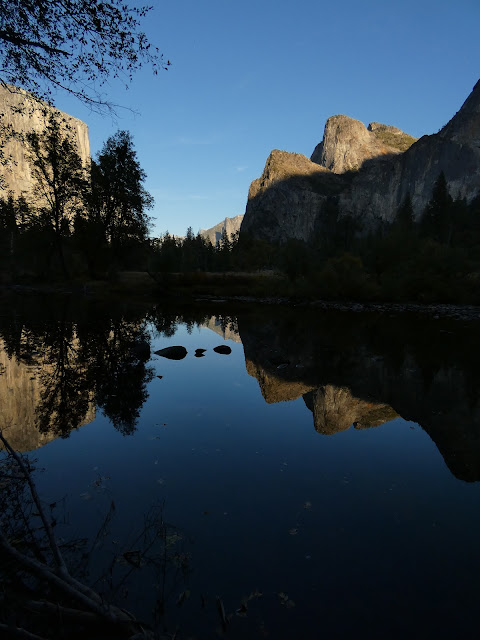