A History of the Drought in Three Pictures.

It's nice to be able to report some good news once in a great while. Global warming models for California paint a truly depressing picture going forward of crippling droughts, failing snowpacks, and many tough choices to make regarding water use. We've been living those models for the past few decades with a five-year drought ending in 2017, and one of the worst drought years in history just last year. We are coming to depend more and more on the occasional intense atmospheric river events to fill reservoirs in preparation for the dry years. They've been in short supply in recent years.

My family-related travels have encapsulated the story of California's precarious water situation. The pandemic had prevented many forays north to Oregon and Washington, but we managed a trip last April, and we just completed a rather harrowing trip today. These trips were a lesson in contrasts.

We always try to take a break at Castle Crags State Park near Dunsmuir and Mt. Shasta. The granite peaks are geologically the equivalent of the Sierra Nevada, but geographically they are part of the Klamath Mountains (which were displaced west from the Sierra millions of years ago). The Crags are shorter than the adjacent Sierra Nevada, but the loftiest peaks reach 6,500 feet, which allowed for glacial erosion during the Pleistocene Ice Ages.

When we visited last April, the forest surrounding the crags was frighteningly dry (below). What should have been a damp forest floor with streams swollen by meltwater was like a tinder box waiting for the spark that would ignite an inferno. Like the rest of the mountains surrounding the Central Valley, the snowpack was gone, literally 5% of a normal year.

When we left on our trip on December 18, things were looking up a little. There had been a surprising strong storm in late October that had dropped some snow on the mountains, but warmer weather had melted much of it. A dry November left the snowpack at 19% of normal.

Then a bunch of storms coincided with our trip plans. When we stopped in at Castle Crags on December 18th, there was a delightful cover of snow on the peaks (the picture above). It seemed a promising beginning of a decent snowpack.

We were in Seattle area at the beginning of one of the biggest snow events in the city's history. We left the city on freeways so covered in ice that the lane dividers couldn't be seen, and everyone guessed (only somewhat correctly) where those lanes were. Spinouts and accidents were everywhere, and it took us nearly four hours to go the first hundred miles towards the south. We eventually outran the storm but stopped for the night in Oregon were the storm caught back up to us.

Our next day was 380 miles of icy anxiety, but luckily the roads were clear when we reached the top of the Siskiyou Mountains and Mt. Shasta. But what huge amount of snow had fallen! Looking at the top photo in the post, you can see the high peaks were literally coated in snow.

In a more official vein, the Sierra Nevada had jumped from 19% to 159% of normal snowpack in the space of three weeks (below). We've received the 52% of the total amount of snow year, with three normally wet months to go. And at least two more storms are forecast in the next ten days. It's really good news, a possible respite from the long-term drought that has been gripping the region. But it's a real mess if you have to be traveling in it.But the snowpack is not the whole story. Reservoirs across the state reached critically low levels in two years of drought (below), and it will take more than a couple of good storms to build them up again. A heavy snowpack is great, but warm periods can prematurely melt and evaporate the ice. I'm going to stay optimistic, but my mind is telling me that this is a respite, not a solution to our problems. If we get a good water year, we will still face imminent droughts and depleted groundwater reservoirs. We need to face the problems, and not put them off. But it sure was nice to see all that snow!

Hoping All a Peaceful Christmas and a Better New Year 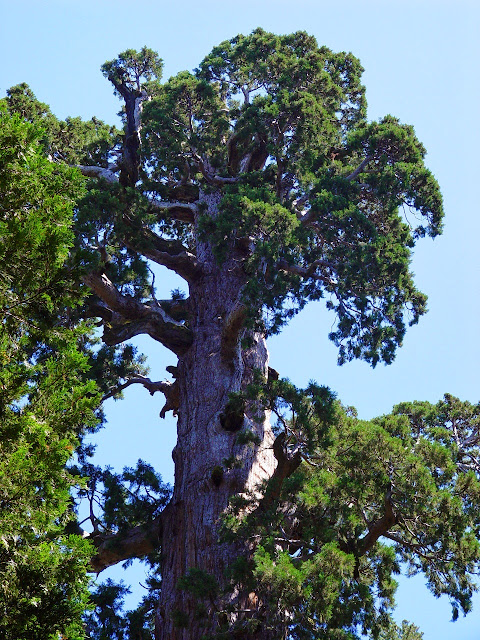 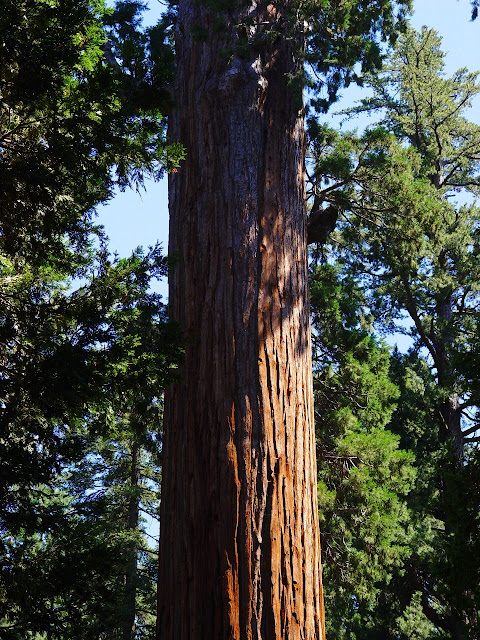 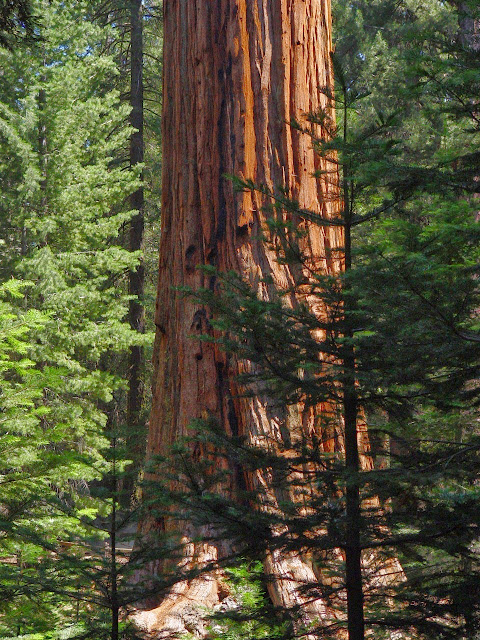 Merry Christmas and Happy Holidays to all! As is my (sometimes neglected) tradition, I offer up a very big Christmas tree, the General Grant Tree in Kings Canyon National Park. The tree is so large (268 feet high, 40 feet across at the base) that it took three pictures for me to capture it.
I don't have a shot of the General Grant all dressed in snow, so here is another Sequoia after a surprise storm during an April trip some years ago. 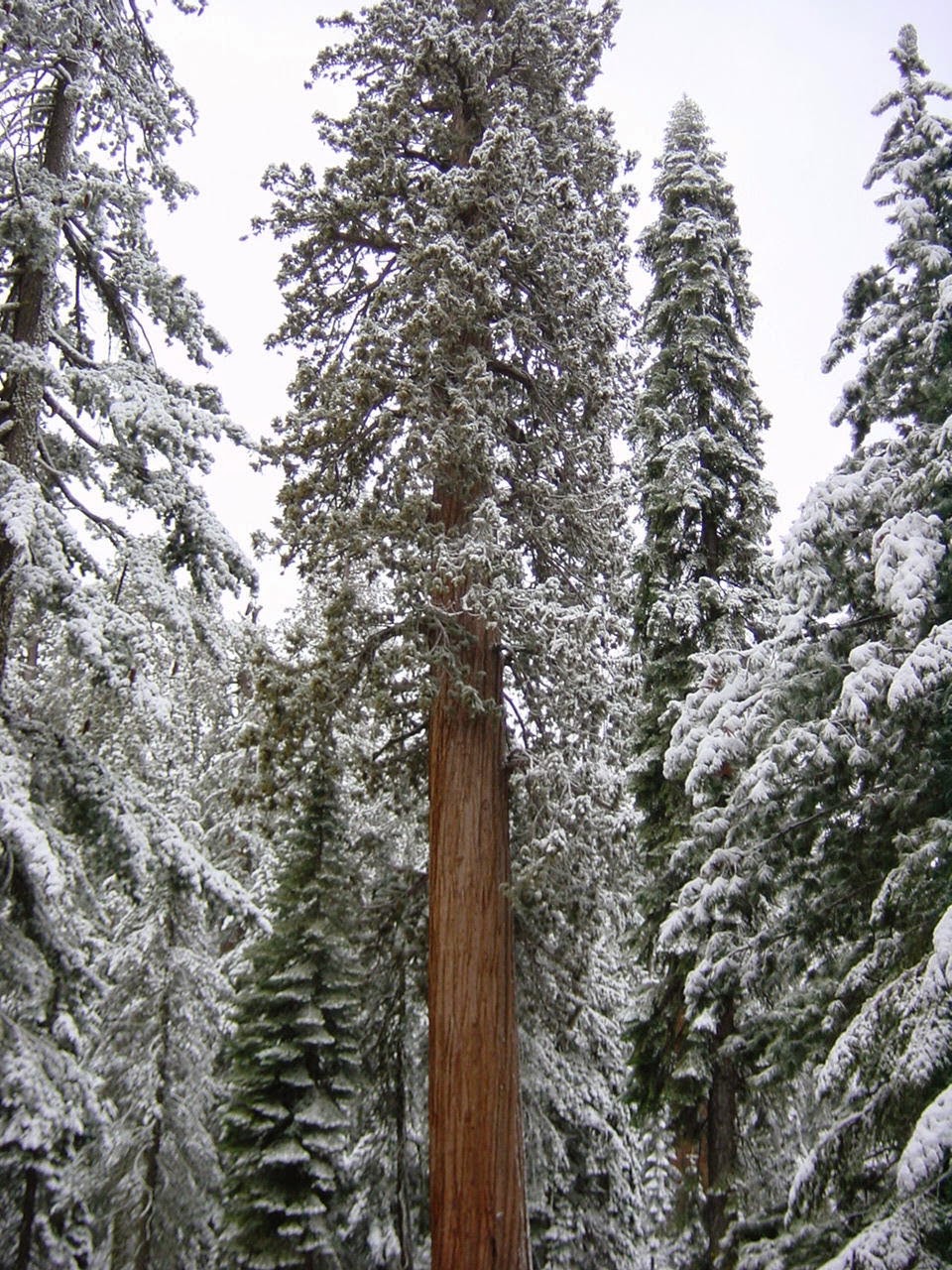 The tree was declared by Calvin Coolidge in 1926 to be the nation's Christmas Tree. At an early ceremony, park superintendent Colonel John White said ""We are gathered here around a tree that is worthy of representing the spirit of America on Christmas Day. That spirit is best expressed in the plain things of life, the love of the family circle, the simple life of the out-of-doors. The tree is a pillar that is a testimony that things of the spirit transcend those of the flesh." 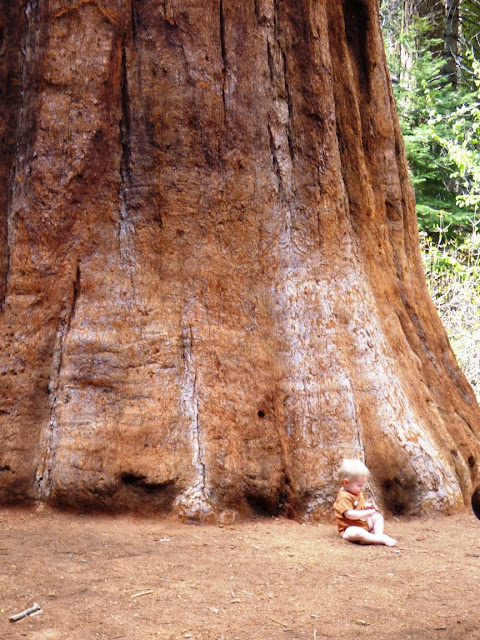 Individual trees can live for several thousand years, but the genus has existed since the time of the dinosaurs. They once grew across the northern hemisphere until they were done in by the Ice Ages. They survive today in several dozen groves scattered across the western slope of the Sierra Nevada. 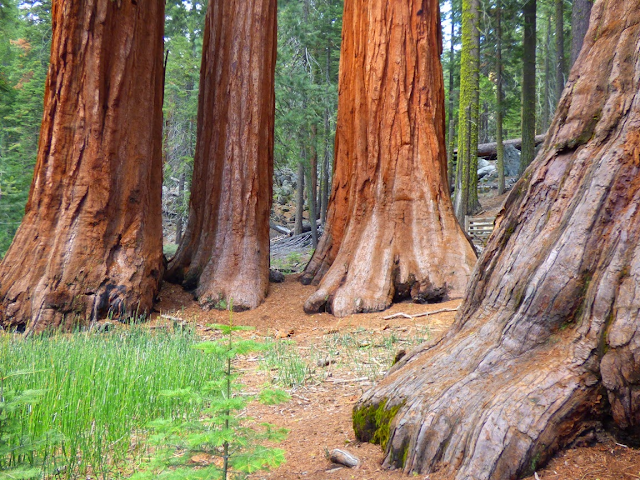 It has really been a tough couple of years with droughts and other natural disasters. I am especially mourning the loss of so many Sequoia trees to wildfires. In the last two years, some 20 percent of all the Sequoia trees on this planet were destroyed. As we celebrate the beauty of these wonderful trees, we must acknowledge our role in their destruction, through climate change and misguided management of the groves. A horrible loss but the trees persist through it all.
It's odd to write of loss and tragedy in a post about a "happy" holiday season, but this holiday season has that sense of gloom and loss as well. I'm seeing people I've not seen in a long time, but we've had to be very careful, and the potential for tragedy continues in the form of a tiny but virulent virus that is surging for a fourth time. There is loss, but there is resilience as well, and that is my hope for all of you that you'll discover joy despite the losses we have all experienced.
I wish a wondrous season to you all!
Posted by Garry Hayes at 4:18 PM 3 comments: