If you haven't seen it, check out this video of the BP oil leak, via Deep Sea News (if it isn't showing right, try this link). A mile underwater, fifty miles from our shores. And turning into an environmental and economic catastrophe.

How did we end up here? The comparison to drug addiction is so apt. At first, the oil was easy, literally leaking out of the ground in places (the picture below is Signal Hill in Long Beach, California in the 1920's). Our country grew dependent on it for transportation, for agriculture, for plastic for God's sake, until it pervaded our society. We started to run short in the 1970's, and realized we were dependent on it, and that it was becoming expensive to maintain our habit. We made tentative efforts to conserve it, to use a bit less, and our overseas suppliers flooded the market until we gave up such silly pursuits as electric cars. 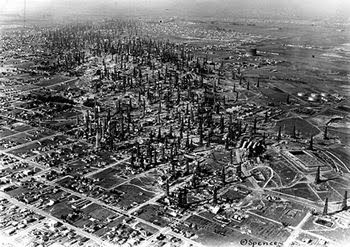 And where are we now? Certain politicians tell us we have to drill our way out of this fix, going into ever more hazardous environments to find crude. They speak as if there is enough oil underground on our continental shelves to relieve our dependence on foreign sources. What can we geologists say?

We could drill every drop in our country's territory, and have no more than a decade's worth. There are alternatives, but we need politicians and commentators who have the courage to do an intervention, to tell us the hard truths. Unfortunately, they are cowards, or worse, in the pockets of the pushers.

Update: My first impression of the Climate Bill is that it is just the kind of soft squishy something-for-every polluter/energy producer that is neither bold action, nor particularly helpful.
Posted by Garry Hayes at 12:15 AM