The Other California: The Other Yosemite at Hetch Hetchy 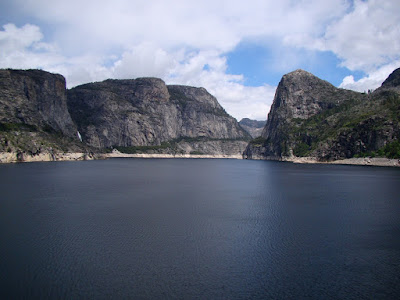 My Wednesday post asked where I took some pictures of some spectacular cliffs and waterfalls, noting that the place was a favorite of John Muir. There are many wonderful gorges in the Sierra Nevada, including Kings Canyon (it was one of the guesses, and there is an important connection, but more on that in a moment). Many commenters recognized the cliffs of Hetch Hetchy Valley. What was missing from the pictures was Hetch Hetchy Reservoir. The valley and dam are part of Yosemite National Park. The bathtub ring of the lake is stark. 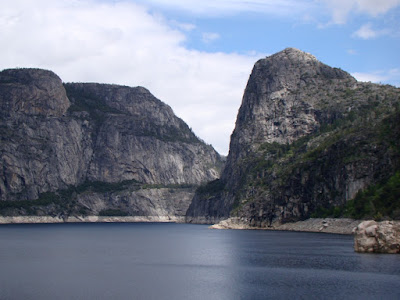 A dam in a National Park? Some may not be familiar with the history of Hetch Hetchy and the fight over the dam, so here is a brief synopsis. Yosemite was one of the earliest national parks (1890) in the United States, but it was a quarter of century before there was a National Park Service, and a quarter of a century before there was a mission of the park service to "...conserve the scenery and the natural and historic objects and the wild life therein and to provide for the enjoyment of the same in such manner and by such means as will leave them unimpaired for the enjoyment of future generations". The idea of building a reservoir in a national park was not considered unusual, but the choice of San Francisco to build the dam at Hetch Hetchy was very controversial. The valley was like a second Yosemite, only more open, with wide meadows and a larger river (the Tuolumne) flowing through. 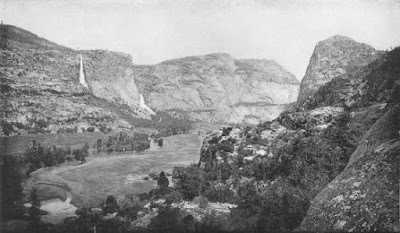 Picture from the Sierra Club
John Muir and the Sierra Club fought an epic battle for 10 years after the dam was proposed in 1903, but eventually the battle was lost, and construction began. O'Shaughnessy Dam stands 312 feet high and 910 feet across, holding back more than a third of a million acre-feet. It serves the water needs of at least 2.4 million people in San Francisco and the Bay Area. 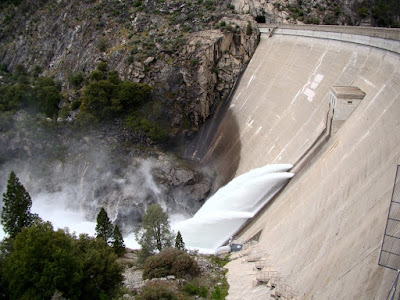 I guess I won't go into great detail about my feelings about this dam, but can say that the arguments of a century ago ring true ever more strongly today as the wild places continue to disappear. There continue to be proposals to remove the dam, but the bathtub ring of barren rock would persist for centuries, perhaps as a symbol to our lack of foresight. It would be many decades before any forests could grow, but there is an argument to leave something for future generations. 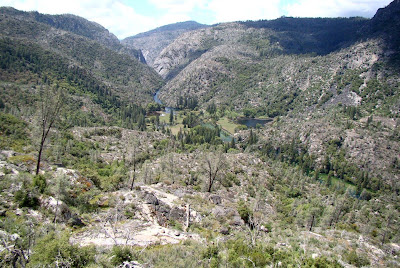 Hetch Hetchy remains a fascinating place to visit. The 14 mile access road begins near the Big Oak Flat entrance on Highway 120, and winds through beautiful forests and meadowlands. About seven miles in, the road rounds a bend and suddenly the full extent and depth of the Tuolumne River Gorge becomes visible. That flat meadowy area in the above picture is Poopenaut Valley, which recalls in a small way the original floor of Hetch Hetchy. It is reached by a tough mile-long trail that drops 1,250 feet. The remainder of the road follows the old construction railway along the cliff tops, and ends in a loop that includes a small backpacker's campground, picnic area, and a parking lot for day-use visitors (this section of the park closes at 8:00 PM). 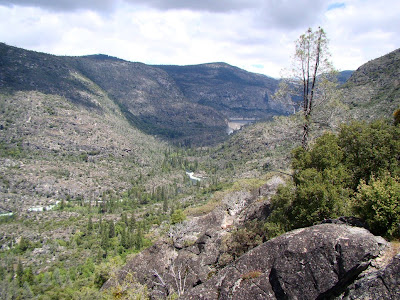 A number of trails, both short and long, start at or near road's end. A nice day hike winds under Tueeulala Falls (somewhere between 800-1200 feet high), and then literally under Wapama Falls (somewhere between 1,300-1,700 feet high). The hike is best in the spring, as the falls dry up quickly later in the year. The region is a great place for wildflowers, a few pictures of which will come in another post.

The "Other California" is my continuing web series highlighting the geologically interesting places in the state that don't always show up on the postcards.
Posted by Garry Hayes at 4:59 PM

It really is a shame the battle was lost over Hetch Hetchy. Thank goodness so much was saved. Maybe someday the dam will go. It's OK if many of future generations got to watch the land recover, and learn from past mistakes.

Although Hetch Hetchy destroyed the valley it was used as a rally cry to prevent devolpment in other parks. There was a plan to dam a section of the Colorado River in the Grand Canyon.
Doug N

Indeed, there were fights at Grand Canyon, Glen Canyon, Echo Park in Dinosaur; we lost Glen Canyon, still fighting the Auburn Dam, though it isn't in a park, and who knows where else they want to put dams. And I can see the arguments coming where they'll say it's the fault of global warming (less snow, more rain, need dams to store runoff since less snow).