A Smattering of Scarps for a Saturday 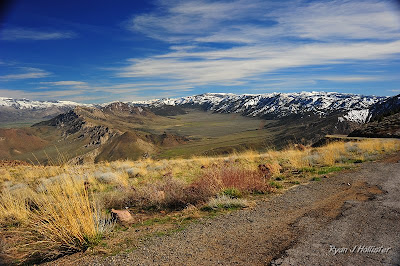 I was going over some of the contributed photos from our recent NAGT-NESTA field conference in Bishop, California, and I saw this wonderful shot of Slinkard Valley by Ryan Hollister. The valley is a half-graben, with the main fault on the right side, which formed as the Sierra Nevada block (mini-plate) pulled northwest from the Basin and Range Province. The extensional forces caused the crust to break up and form normal faults (the overhanging fault block, the headwall, slips down relative to the sloping fault block, the footwall - see the photo below). Such faults that slip along curved planes are known as listric faults. The exposed surface of the fault plane is called a scarp, and scarps are the features I want to highlight today. 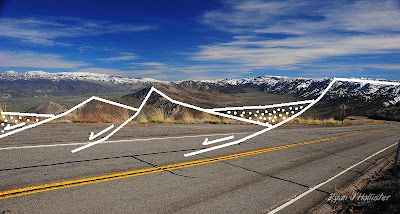 Scarps are the faces of fault terraces, and can result from a single earthquake, or they can be an entire mountain range front, resulting from hundreds of large quakes over several million years, as in the shot below of the Sangre de Cristo Range in Colorado (below). The Sangre de Cristos form the eastern margin of the Rio Grande Rift that extends from Colorado down into Texas. 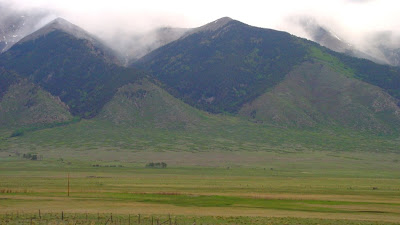 As the mountains rise and the valleys sink, erosion attacks the flanks of the new range. The rapid downcutting forms deep 'V'-shaped valleys, and the debris washed off the mountain accumulates in large alluvial fans. The erosion of adjacent valleys forms triangular spurs called triangular facets, which are nicely exposed in the picture above because the trees are missing (presumably a wildfire). The combination of a wide upper valley, a narrow valley opening, and an alluvial fan reminded geologists of a wine goblet, so these are called wineglass canyons (noted on the photo below). Some would argue that anything reminds geologists of wine or beer... 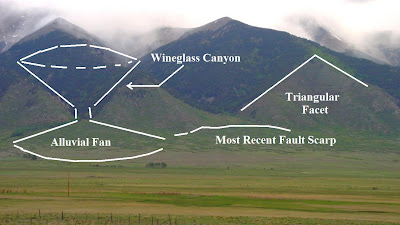 Extensional stresses don't always result in a single zone of faulting. If you enlarge the picture below, you will notice how the landscape drops from left to right in a series of stairsteps. Each 'step' is a normal fault. Tule Lake, on the far right, occupies the lowest downdropped block, a graben. This picture is from Lava Beds National Monument, at the boundary between the Cascades Province and the Basin and Range Province in northern California.

So, what about scarps caused by single earthquakes? Here's your first quiz: where is the scarp in the photo below? This alluvial fan (or cone) formed along the Sierra Nevada's Wheeler Crest at the north end of the Owens Valley near Bishop, California. The scarp resulted from an earthquake within the last 10,000 years or so (it crosses the 13,000 year old moraines of Pine Creek just a few miles away). 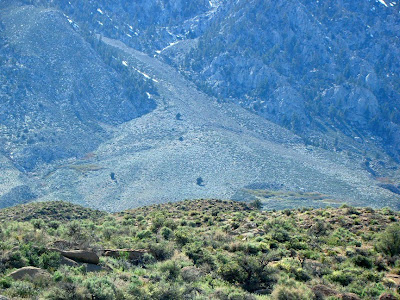 Another great place to see recent fault scarps is Death Valley National Park. The graben of Death Valley has dropped so much it now lies 282 feet below sea level (the picture was taken at Badwater, the lowest point reachable by car in the western hemisphere). The one or two earthquakes that caused these scarps happened several thousand years ago, but are almost untouched by erosion because of the exceedingly dry conditions here (current rainfall average is less than 2 inches a year). 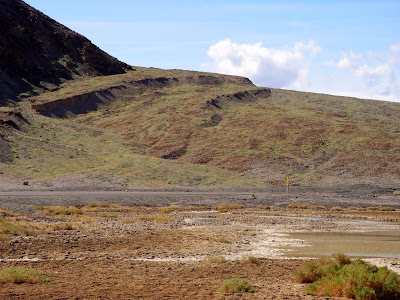 Looking for something more recent? The scarp in the photo below is located at the town of Lone Pine in the Owens Valley east of the Sierra Nevada. It originated in the magnitude 7.8 magnitude Lone Pine earthquake of 1872. The quake killed 28 people (out of a local population of about 300), and formed scarps over a distance of around 100 miles. It remains one of the three largest earthquakes in California's recorded history. 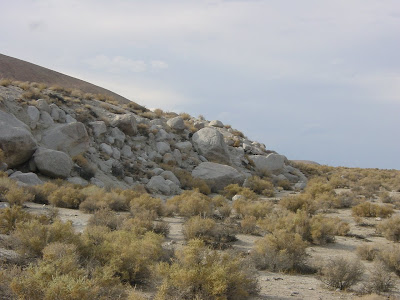 Are you looking for something even more recent? How about the one below? It formed in the 1992 Landers Earthquake, magnitude 7.3, in the Mojave Desert of southern California. The scarp could be followed for a distance of more than 50 miles. It was in a remote area, but killed three people nonetheless. If such a quake hit a more populated part of California, the results would be unthinkable. 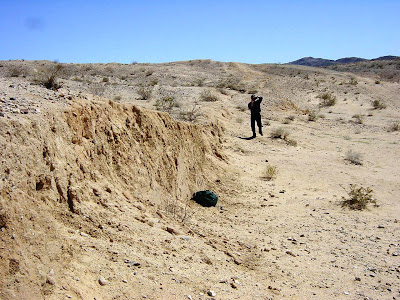 And not that anyone in southern California would forget, but the Easter Sunday El Mayor-Cucapah Earthquake this year (magnitude 7.2) formed scarps that could be followed for 50 miles from Baja California into Alta California near Calexico. 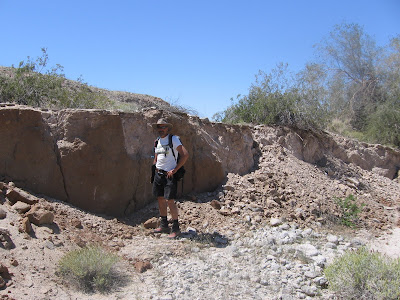 Photo of the Cucapah-El Mayor Earthquake from the Southern California Seismic Network
Have you got a favorite scarp posted somewhere? Send it and share it!
Update: Ah, Lockwood was a day ahead of me and wrote about the Lone Pine scarps yesterday!

Update #2: Forrest Hopson checks in with his favorite scarp, the Pinto Mountain fault in Twentynine Palms near Joshua Tree National Park. Water is forced to the surface along the fault zone, allowing the palms to thrive. 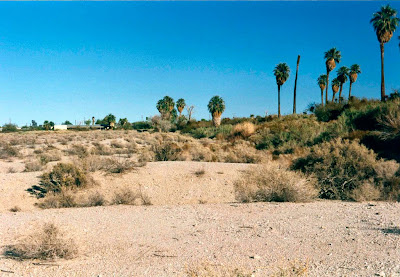 I posted a piece yesterday on the Lone Pine scarp. There was a research article sometime in the mid 80's that looked at the ages of desert varnish on boulders at that exposure, and concluded that though it's a single scarp, it's the result of several quakes. It was either the GSA Bull or Geology... I was getting those from my GSA membership at the time, but I don't remember what year it was.

How about the scarp just a few yards from Mission San Juan Bautista? The Mission sits on top of the elevated ridge.

They even have a seismograph on property!

What irony that they built the mission right on top of the fault! San Juan Bautista was the southern end of the 200 mile long fracture from the 1906 earthquake. It's a neat spot for geology!