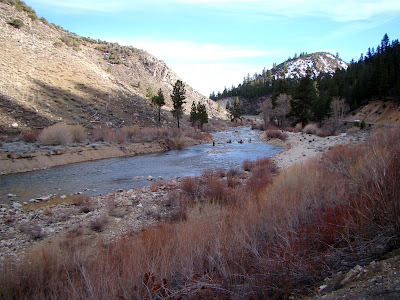 I posted some pictures of a "fluvial forest" this morning (fluvial=river) asking for an explanation about how these trees came to exposed in the river channel, and in short order got three excellent answers. I've provided a larger format picture above to give some perspective on the setting (click on the image to see the bigger picture). This is the West Walker River, a few miles downstream from the junction of Highway 395 and Highway 108 from Sonora Pass in California's Sierra Nevada.

It's rather striking and strange to see so many trunks of mature trees sitting in the active channel, as Jeffrey pine really can't tolerate soaking for more than a few weeks a year. They otherwise do quite well on the shady slopes to the right in the picture above (and not so well on the dry slopes to the left). I have to admit that this was my thesis area, but I didn't really give the trees much thought 25 years ago, yet they reveal an interesting story.

Anne had a great idea, saying that mining wastes could have caused the filling of the channel, smothering the trees. This would be a great explanation, and such a thing indeed happened in the Sierra Nevada during the hydraulic mining era of the Gold Rush (I posted a picture of a tree trunk formed this way some time back). The problem is that no mines of any consequence were present in the area.

Rob provides a glacial explanation, in which glacial outwash buries a forest, and then a surging glacier planes off the trunks. This is an appealing explanation because this part of the canyon was very close to the terminus of the Tioga and Tahoe glaciers. Glaciers would explain it, except the age of the trees are wrong. One set of the trees in this fluvial forest grew between AD 900 and 1100, while another set grew between AD 1210 and 1350. Smaller glacial episodes in the last two thousand years never approached the area. 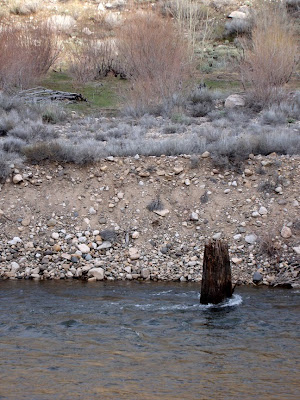 Lockwood comes the closest to explaining what happened here, suggesting that a debris flow filled part of the canyon, killing and burying the trees, and then the river exhumed the forest. But there is an interesting twist: the valley is really narrow here (look at the top photo; there is barely enough room for the river and the highway, and when the river floods, there is no room for the highway at all. It disappears and has to be rebuilt, most recently in 1997). The trees, and there are dozens of them, were pretty much filling the entire canyon bottom. There was almost no room for a river channel when these trees were growing. This suggests that the river was much smaller in the two time periods the trees represent. In other words there were two crippling droughts that lasted 200 and 140 years respectively. Once the droughts ended, the river filled the channel with sediment again, and debris flows, as Lockwood suggests, undoubtedly had a role. Outwash from the Matthes glaciation may have been a factor as well.
There is confirming evidence for such mega-droughts in other areas of the Sierra Nevada. Tenaya Lake, Lake Tahoe, and Fallen Leaf Lake all have submerged forests that grew to maturity during these periods when the lakes didn't have enough water to breach their outlets. Oral histories of California's Native Americans also hint at terrible droughts.
In human time frames, droughts are a fact of life here in California. We had extended droughts from 1928-1934, 1960-61, 1976-77, and 1988-92. We may or may not be ending a three year drought this year as well. Our population has grown so large that each drought becomes more problematic, and we muddle through on the strength of a few extraordinary precipitation years that fill reservoirs for a time. What would we do if another century-long drought were to come? And what role will anthropogenic global warming play? I, for one, wouldn't particularly care, because I will be dead, but my grandchildren might have a real struggle.
Stine, S., 1994. Extreme and persistent drought in California and Patagonia during mediaeval time. Nature 369:546-549. I can't find a copy of Stine's paper on the web, but Stine's findings are discussed briefly here (page 15-16), and here (page 296)
Posted by Garry Hayes at 3:35 PM

Excellent. I like to see that everyone worked towards one problem here.

I didn't think it would be a glacial explanation, as you said, the times just didn't match up, and also the glacier we were working at (Bering Glacier) is a piedmont lobe. One in such a small valley such as the one in the photographs would have to be alpine. Not to say it would be impossible for a valley glacier to do so, but I don't know of many that have.