Flowers For a Friday at Hetch Hetchy 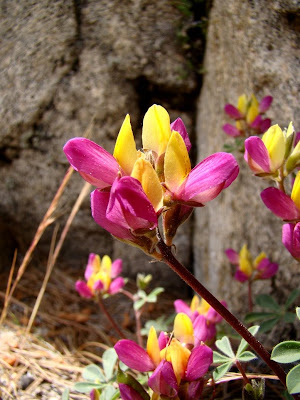 One thing I did not see a lot of in Yosemite Valley this last week was flowers, aside from the very pretty Dogwood blossoms. The valley floor is covered for the most part by thick forest and at this point flowers were either not blossoming yet, or they were shaded out by the forest canopy. Yosemite was once renowned for having more than 700 acres of meadows, but now there are fewer than 70 as fire prevention has allowed young trees to encroach. 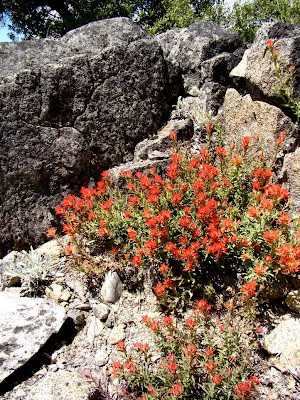 The situation was quite different at Hetch Hetchy. The forest is sparse, and the area receives a lot more sunshine, so the flowers were quite showy. Indian Paintbrush and Lupine were quite common, including the Harlequin's Lupine (first photo), that I had not noticed before in my travels. 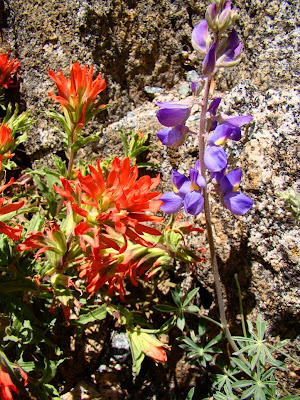 I know this is primarily a geology blog, but I couldn't resist posting a few flower pics, but the observant reader will notice that rocks play a prominent part in the framing of the plants! 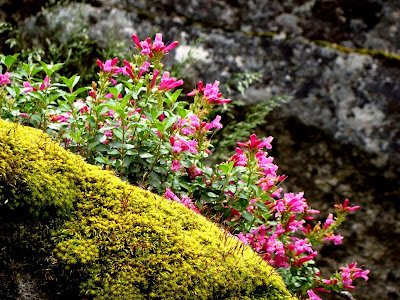 We also ran across something else on our trip: a Yellowstone-style traffic jam at Crane Flats. Yellowstone tourists are renowned for causing traffic jams wherever an elk or bison is encountered. We had a similar jam at Crane Flats. I knew that twenty cars and a ranger would never stop for a deer or squirrel, so we stopped too (contributing to the jam, I know), and saw a very nice little bear doing bear things in the meadow by the highway. It was good to see the bear totally ignoring the crowd, and concentrating on eating a natural food source instead of somebody's potato chips (ripped out of a car)! 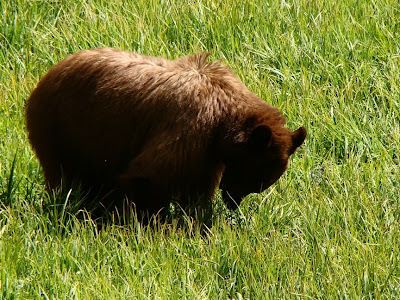 Very cool to see a bear. I've never seen the Harlequin's Lupine, quite colorful. And yes, I noted the rocks.

Aw, give yourself a break-- the little rootlets of those flowers and lichen contribute to the breakdown of the granite into clasts. (it's not all wind and water)
--
I'm gonna steal your picture for my album from last spring. we were hiking up a trail (can't remember name-- the former circle trail around the lake on the east end of the park) The people in front of us stopped suddenly and pointed with their cameras. About 10 ft away was a young bear, chowing down on nature's bounty. I got my video cam out, but then remembered that there were nuts and fruits in my pack. I couldn't toss the pack because my id was inside. So, we backed up slowly and took off. Never saw the fresh landslide on that trail ;-(