Half Dome is down to a Quarter! Will Anyone Want to Visit Yosemite?

OK, not really, I'm just continuing a brief series on Yosemite Valley encouraging folks to look behind and to the side of the iconic features like Half Dome, El Capitan, Yosemite Falls and Bridalveil Fall. Our "high-water journey" to Yosemite Valley last week included an excursion to Glacier Point, which had opened to visitors only a few days prior.

The views from Glacier Point, and the usually quieter Washburn Point, were spectacular, as they almost always are. Half Dome dominates the views, so I was trying to take a few shots that didn't have the granite monolith in the center. They appear below. 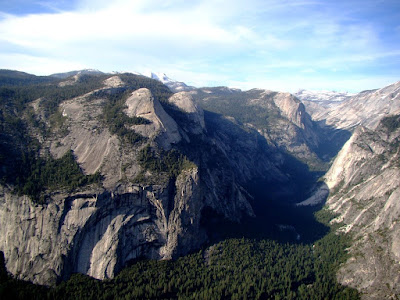 I am always struck by the grandeur of Tenaya Canyon, the main tributary valley to the Merced River that meets the Merced at the head of Yosemite Valley. I call it a tributary "valley" because Tenaya Creek is a relatively underfit stream, quite incapable of carving such a deep valley, one that rivals the Grand Canyon in depth.

Even the glaciers shouldn't have been big enough to carve such an impressive gorge, and they wouldn't have except that the vast ice sheet that covered the Tuolumne Meadows area to the north spilled over and contributed a vast amount of ice to the otherwise small Tenaya glacier system. 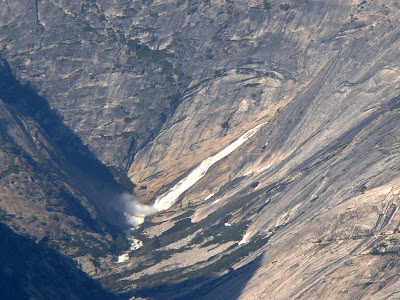 It was a week of the highest snow runoff, with the Merced River running at 7,000 cubic feet per second, about three times normal. So with a zoom shot, I was able to spy the rarely viewed Pywiack Cascades, in a trailless and inaccessible part of Tenaya Creek Canyon (an interesting description of the high adventure journey through this gorge can be found here). I would love to make that journey, but I'm getting just a bit old for such ventures! 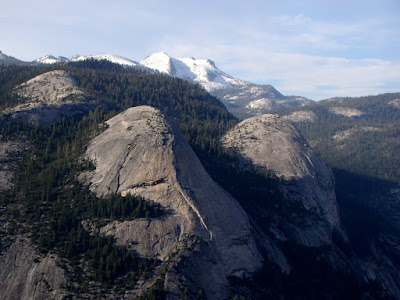 If Half Dome didn't exist, North Dome and Basket Dome would certainly command more attention. Unlike Half Dome, these lower domes were probably covered by ice during the most intense glaciations, but in the last 800,000 years most of the shaping has been accomplished by exfoliation. Exfoliation is a form of unloading, in which the granite expands as it is exposed by erosion, cracking into slabs running parallel to the surface of the rock. The slabbing tends to break off corners and edges, leading to the characteristic dome shape. 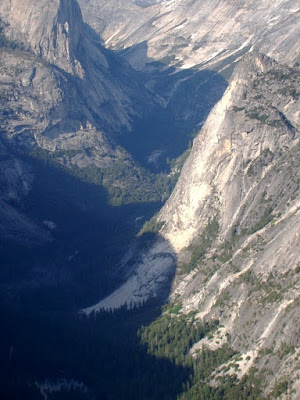 The view from Glacier Point changed forever in March of 2009 when a huge rockfall, the biggest in two decades, thundered off of Ahwiyah Point below the cliffs of Half Dome. The light colored strip running across the photo above shows the path of the slab, and the pile of talus in the shadow shows the impact point. Hundreds of trees were blown down, and a popular hiking trail was covered, but luckily no one was hurt.
I know it is hard to see the view from Glacier and Washburn without actually noticing Half Dome, and so I did take quite a few pictures of it. One of them is below, if you are feeling only half-satisfied by the rest of the post! 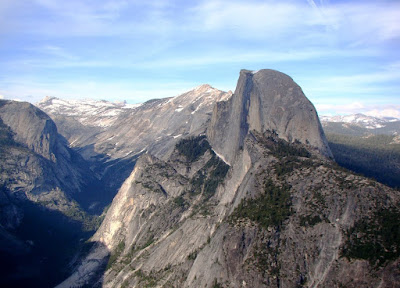 The Tenaya Canyon sure looks a beautiful place to hike. Deeper than Grand Canyon? Wow!

"Rivals" the Grand Canyon...it's about 4,500 feet deep at one point, so not quite as deep. There are several canyons that are deeper, by far though. Kings Canyon is almost 8,000 feet deep.

truly enjoyed your photos - if i had to pick a favorite waterfall it would be illouette, and i absolutely love clouds rest - the panaramic view of the valley with half dome included. when i went to yosmite my heart said it had found its home.

I read the comments on the depths of the various gorges. I have been told "when" the gorge carved by the Ruth Glacier (Alaska - coming off of Mt. McKinley) melts out, it will be the deepest gorge in the world? I think the ice is 4000' thick.

Any thoughts on the accuracy?

I don't really know about the glacial canyon in Alaska; an interesting idea, but I hope things don't go so badly that we actually find out...