Where I wish I was...Unique View of Lava Flows 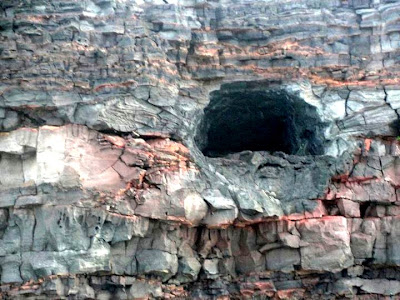 Today's photographic tour comes courtesy of my nephew Jacob, who worked hard the last few years to save enough for a tour of the Hawaiian Islands. One of his adventures was a boat tour off the coast of the Big Island where the Pu'u O'o flow has been pouring into the Pacific for much of the last quarter century. A boat tour this close to the fresh lava flows is something I haven't had the opportunity to do yet.

The lava is erupting from the East Rift Zone of Kilauea, and flows for six or seven miles through a system of lava tubes until it reaches the coast. One of the lava tubes (in the picture above) has been breached by wave erosion. 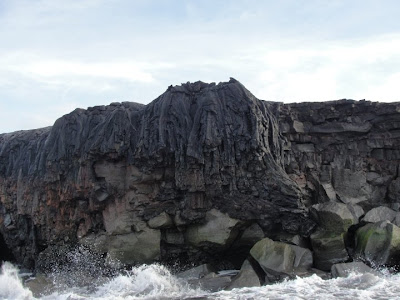 The lava flows are still extremely hot, even after traveling for miles (the lava tubes are an excellent insulating environment). As they emerge from the tubes, they flow like thick syrup, forming so-called pahoehoe lavas. 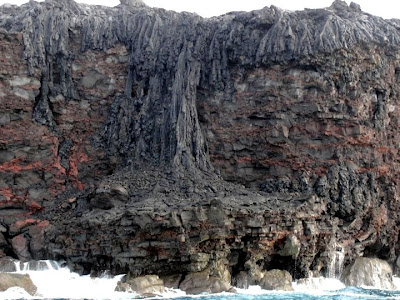 Here, another lava flow spilled over the edge of a seacliff. It didn't take the waves long to cut into the base of the flow. Looking at the cliff exposure, it is easy to see why very few streams can be found on this part of the Big Island. Any rain immediately seeps into the subsurface through the system of cooling fractures. 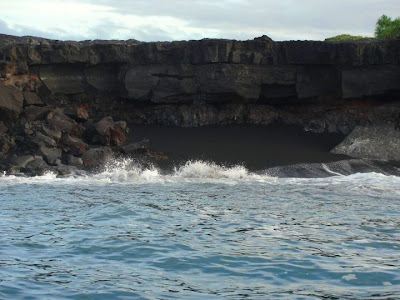 At times, the lava flows directly into the water and shatters on contact, forming black sand beaches (above). Hawaii is unique in the variety of sandy beaches; some are composed of coral fragments and are white, some are reddish, from weathered iron-rich basalt, some are black, and a precious few beaches are composed of bits of olivine, and are green. 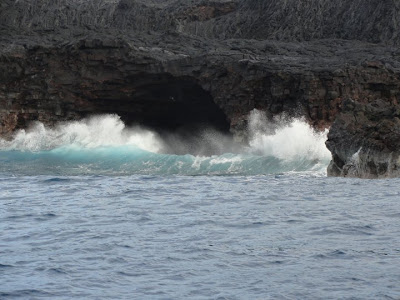 Wave action can quickly enlarge openings, forming sea caves. Arches are also produced by the waves, but they don't tend to last for very long.
Jake, you have the makings of a real geologist! Thanks for sharing these great photographs!
Posted by Garry Hayes at 12:12 PM

Wow those are some bizarre formations. The lava flowing over the cliffs looks a bit like cooling wax.

What an awesome view of the lava flows. I've caved in a few lava tubs and the formations are amazing. Jake should be proud of these captures, geologist or not.

Hello,
This is spectacular! I'm living on Big Island right now (I am the one that did the rappel that you commented on)
These are fascinating.
I love exploring lavatubes on Big Island. If I'm not out sailing (I do snorkle tours out of the Mariott hotel with OceanSports) I like to find and explore the lavatubes here. These photos get me excited about where I am living right now. :) Thanks for sharing!

Hello,
I'm interested in Hawaiian volcanism, your photos are fantastic, do you have their coordinate, if it is the case please send them to me (mkonesh-at-yahoo.com)

I don't know the exact coordinates, but they are on the coast of the Big Island between Puna and Chain of Craters Road.