More Dangerous Than Cocaine, #4: We have met the enemy... 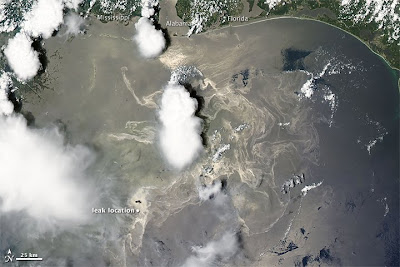 This picture is making the rounds today. It's appalling. It's easy to blame oil companies for the nefarious happenings in the Gulf of Mexico, or lax government regulation, or complacent attitudes over safety, but ultimately, the blame lies with ourselves. A number of commentators in recent days have pointed out that every president since Richard Nixon have described the need for "energy independence", but as for taking real action, well, the only guy who tried to actually say we had to make hard choices got canned in favor of the happy-go-lucky grandfathery "morning in America" fellow in 1980. Meanwhile, ever since the 1970's, we've continued wasting petroleum and almost totally ignored the problem.

Even now, hardly anyone in the media or in the broader culture seems to be discussing the bigger problem. It's not seeping into the national conciousness the way it is into the gulf. It's not just the mess we made in the Gulf. It's the problem of the oil we burn. We are addicted to petroleum; we are doing nothing to curb that addiction, we are just working harder and paying more to feed our addiction. But the oil is running out, and we have no viable alternatives. We are poisoning ourselves, and overheating our atmosphere, but we will tolerate no talk of ...dare I say it?...sacrificing. Instead, we will just drift along until we hit a very tragic wall. Then the sacrifice will be on us whether we like it or not. Gas at $20/gallon? Not so far away. No gas at all, like the 1970's? Probably.

Contrary to the myth, you can't see the Great Wall of China from space. Check out the larger version of the picture above...maybe you are sharper-eyed than I am, but how sad that the one bit of evidence that we live on this planet that is visible from space is an oil slick. The oil spilled in the gulf may amount to 2 million barrels so far (over the two months)...that's about one-tenth of what we consume as a country per day. 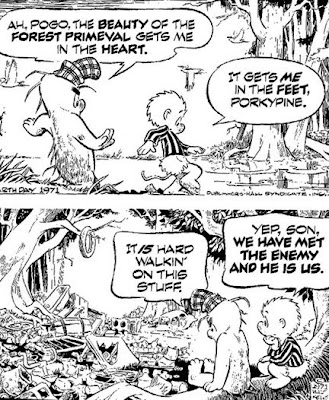 Learn about Pogo and the 1971 Earth Day Poster with the famous line "he is us" here.
Posted by Garry Hayes at 8:06 PM

This makes me so sad. And mad. But I feel pretty powerless too. I drive a hybrid. Does that help?

That would help a lot if we all did...so many other things we should be doing: more mass transit, more trains, more efficient vehicles. My next car will be a hybrid...nothing like being a hypocrite...

Guess it's just easier for most people to be complacent. I can't afford a hybrid and don't think one would pull my RV home as well as the diesel.

Yeah, them hybrids with their wonderful batteries that will all be in landfills 20 years from now are so much better for the environment.

Well, to be honest, the tradeoff is probably positive, but still, I think there needs to be a better solution than hybrids.

I like the American Idol crack at the end!

With every "solution" (e.g., hybrids) there come new problems, foreseen and unforeseen. Hybrid batteries are a great example. There's no free lunch. Wind turbines provide clean energy... but they also kill migrating birds. Even solar, which seems to be the most obvious long-term choice to me, has its detractors.

It's an interesting time to be alive, watching how society sorts through its growing awareness that its destroying its own life support system.

"The frog does not drink up the pond in which he lives." - Native American proverb

Let me preface that I am anything but a Luddite or anti-technology...I love the internet and the abundance of information it has given us, but I looked at story on CNN online this morning about how many people were lining up and going ga ga over the release of the new Apple IPhone. I found it very sad and indicative of sick culture not just here but worldwide that is so in denial and distracted by "toys" mindless entertainment (like American Idol) and silly religious myths, while physical reality...the very biological foundations of our existence are being gradually compromised.

Will we wake up and mature in time to abate the train wreck we causing? Sacrifice is coming, but it did not have to be this way if mindless self-absorbed individualism(think Rand Paul, Limbaugh, Palin, Beck and all the other loony Ayn Rand worshipping Tea Baggers) was replaced by a cooperative willingness to do what is necessary collectively for the common good of life as a whole.

Expressing our unique individuality is far different than the selfishly motivated cult of individualism.

"We have met the enemy and he is us" - I didn't know the quote went back so far.

Even after seeing that picture in about a dozen blogs and news reports, it still creeps me out. Hard to see how that damage could possible be undone in the near future...