What Those Irresistible Numbers Looked Like in the Real World... 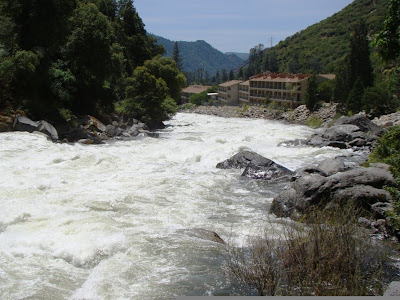 I really wonder what the consulting geologist told them about the history of the Merced River here? That's a pretty big resort complex on the western border of Yosemite National Park. They have lots of river view rooms, but still, that berm doesn't seem like the most secure defense against the major floods that are sure to come. But then, I'm not a consulting geologist...

I took a trip up Highway 140 along the Merced River to take in the highest runoff of the season (the irresistible numbers that caused me to hit the road). The flow spent two days at record levels for early June, at about 7,000 cubic feet per second (normal is about 2,000 cfs). I comment on the placement of the resort because during the flood of 1997 (admittedly a 200-300 year flood), river discharge at this location was more on the order of 24,000-25,000 cfs, and the highway was inundated in places, and literally removed in others. 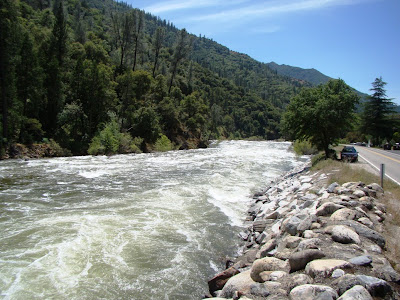 It was a wonderful day for exploring...the grass was turning brown, but many slopes were still covered with blooming wildflowers (lots of pink and blue, the poppies are gone now), and the roar of the river was invigorating. As we approached the boundary of Yosemite National Park (below), the first of the ephemeral spring waterfalls started appearing. 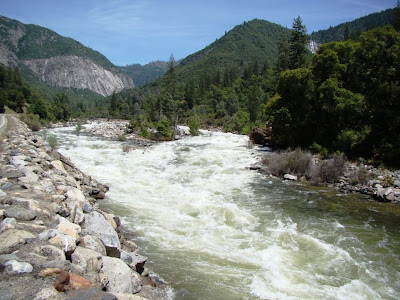 We kept getting distracted by the sights and didn't arrive in Yosemite Valley until the early afternoon, but we kept busy through the sundown and twilight. Many pictures are coming; below is a preview of what we saw of the Merced River in Yosemite Valley...the reflection of the sunset on a flooded meadow at the Swinging Bridge picnic area. The water was all the way up to the base of the bridge, and a ranger on patrol mentioned that about midnight, the flood surge actually covered the top of the bridge. 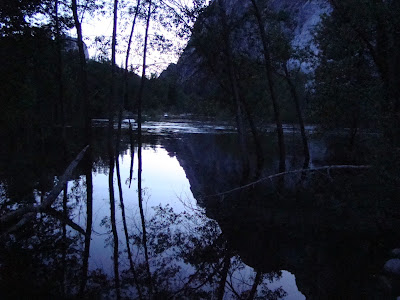 Needless to say, it was closed, but there is always someone ready to jump over the barriers.. 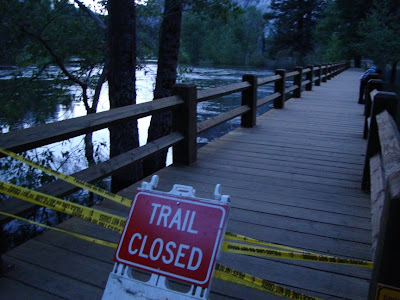 Wow Garry, that's some high flow. Now wonder you wanted to go, consulting geologist or not.

You know, signs are only for some people.

this is my favorite time of year in yosemite and the first spring run off i have missed in decades. thanks for the updates.

We're having record flows here in W. Colorado also, awesome to watch. I post on spotted-dog-ranch.blogspot.com