Yosemite and a Sense of Scale (scroll down for the better pictures!) 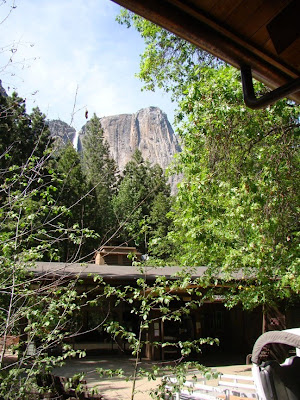 A few weeks ago I had 'dinner' at the Mountain Room at the Yosemite Lodge (on my budget, dinner amounts to the French Onion Soup), and the maitre d', having been properly tipped, gave us the best seats in the restaurant for viewing the beautiful cliffs of Yosemite Valley.

Oh, the picture above isn't the view we had. It was 9:30 PM on a moonless light and we couldn't see a thing. But on our trip this week, I scooted around the corner and found what view we would have had from our table. That's the top of a booming Yosemite Falls a little to the left, and Yosemite Point on the right. The spire called the Lost Arrow is just left of center. I mentioned some of the geological background of Lost Arrow a while back. 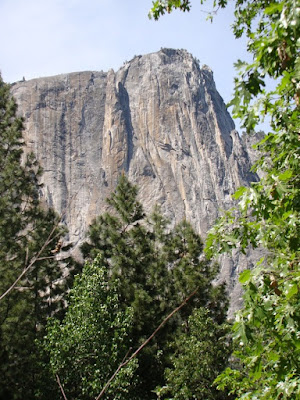 I zoomed in a little bit to get a shot without the distraction of the roofs of buildings and to get a nice framing effect with the greenery. It's a beautiful and unique cliff that is sometimes overshadowed by the presence of nearby Yosemite Falls.
Lost Arrow is a destination for many rock climbers, so I zoomed in even more to see if anyone was around There seemed to be a dot of a person on the summit of the Lost Arrow, and three or four people standing at Yosemite Point, behind the fence up there. What a view they must have had on this sparkling June day!
As I stared through the camera lens, I started to realize once again the sheer scale of a place like Yosemite Valley. There is a difference of 3,000 feet between the point and the valley floor. People fade into insignificance against such cliffs (I explored this idea last Christmas at the Grand Canyon). 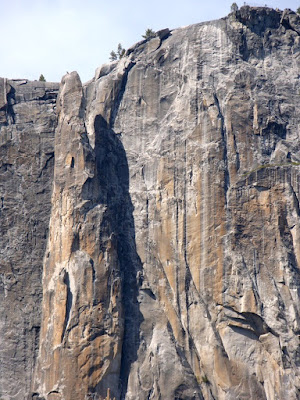 Can we use a scene like this as a way of understanding the immensity of geologic time? Maybe. It's a difficult concept. We geologists toss about ages in the millions and billions of years, and sometimes those numbers lose meaning, just like when a politician talks about spending in the millions, billions or trillions of dollars. I mean, really, what the difference? An 'm' replaced by a 'b' or 'tr'. Until the bill comes in.
The world has been around a long time. If the climber at the top of the Lost Arrow is six feet tall, his or her height is equal to 0.002 of the height of the cliff. If we think of the height of that person as representing a human lifetime of 100 years, the cliff represents 50,000 years. A goodly sum of years, certainly. There were essentially modern humans on the planet then, but many things would have been different; no cities, no agriculture, for instance, and there were a lot of strange animals in the world who are no longer with us: woolly mammoths, mastodons, sabertooth cats, and giant ground sloths. The last pulse of the ice age glaciers would still lie in the future, and the floor of Yosemite Valley may well have been a lake.
But 50,000 years is a small increment of time in geology. It is but 1/20th of a million years. The oldest glaciers coursed through Yosemite around a million years ago. If a human standing on the rim of the canyon represented a human life compared to a million years, Yosemite Valley would be 60,000 feet deep, essentially the difference between the top of Mount Everest and deepest trenches of the ocean floors.
Geological time certainly doesn't stop there. The granitic rocks that form the spectacular cliffs of Yosemite Valley cooled from molten magma around 85 to 120 million years ago. Round off to 100 million: if the person standing on the rim of this canyon represents a human life, the canyon of 100 million years would be 1,135 miles deep. That's more than a quarter of the way to the center of the Earth.
The oldest rocks in the Yosemite region, metamorphic rocks that once lay on the floor of the Pacific Ocean thousands of miles from California, date from around 500 million years ago. Our metaphorical canyon would now be 5,675 miles deep, which would be a real trick, since our planet is just 8,000 miles in diameter.
The oldest rocks in the world are just over four billion years old, and the planet formed 4.6 billion years ago. I don't know how to represent such numbers! But you could take a look at the next photo zooming in on Lost Arrow...how many people were climbing it on Tuesday (click on the photo to find out)? 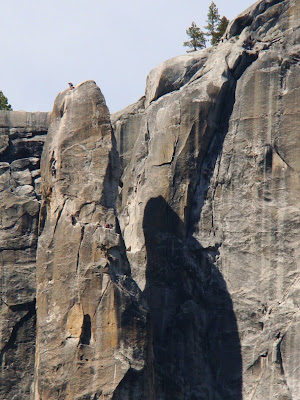 UPDATE: I shouldn't say "I don't know how to represent such numbers", I should say, "It's late and I can't think anymore". If this cliff represents 4.6 billion years (the age of the earth), each foot represents about 1.5 million years, each inch equals about 128,000 years, so a human lifetime of a century would be about 1/1,280 of an inch.
Posted by Garry Hayes at 12:42 AM

Love the last shot, with or without the people.

Slick trick for the dinner pic.

Geologic time is difficult to wrap one's brain around. At the canyon I use a geologic yard stick to help put our mya in perspective.