The World in a Water Droplet: Sunday's Shot was a Snap 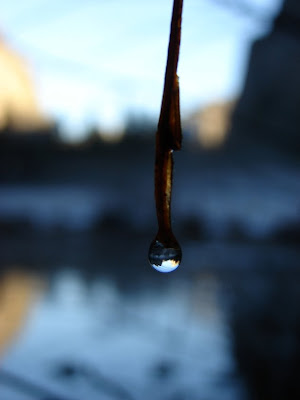 It didn't take long for Eric and most of the others to figure out the location of Sunday's Snapshot. It is indeed at Yosemite (and come on, regular readers, is that any surprise?), taken on a late January afternoon in 2007 at the Gateway View, a spot that sometimes gets short shrift by Yosemite visitors (but not the photographers). It is a small parking lot at the west end of the valley that most people pass while on their way out of the valley, tired, running late, and all "sceneried" out. 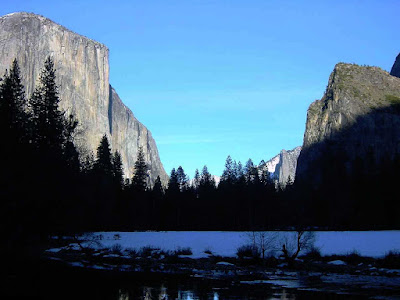 The Cathedral Rocks and Bridalveil Fall dominate the view on the right, while El Capitan looms over the left. The 'Gateway' refers to the narrow constriction of the valley formed by the cliffs of El Capitan and Cathedral Rocks. Both cliffs are primarily composed of El Capitan granite, which is relatively unjointed and therefore was resistant to plucking and quarrying by glaciers. 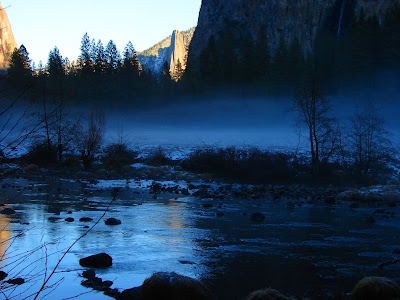 It was plenty cold and a mist was rising on Bridalveil Meadow. 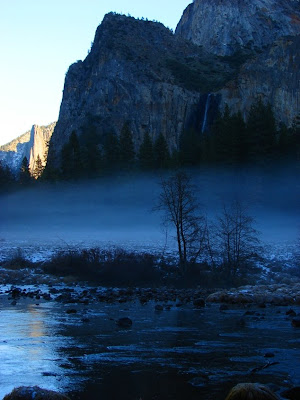 El Capitan dominates the west end of the valley with a 3,000 foot sheer cliff. You wouldn't have the calm water if you visited Yosemite Valley this week...it was a cool month during May and the snowpack was melting slowly until a series of hot days this last week. The Merced River is flowing at close to 7,000 cubic feet per second, a bit above flood stage (normal for early June is around 2,000 cfs). Check out the Yosemite Nature Notes Blog for some up to the moment reports on the status of the rivers and runoff.

And here are some clumps of frozen grass, just because I liked the way they looked... 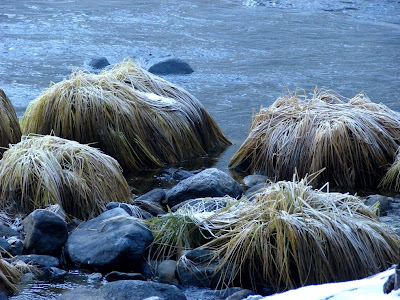 That last one = Tribbles!

Yosemite? I didn't know you were fond of Yosemite ;)

Absolutely stunning, and thank you for sharing with all of us the beauty of Yosemite. I haven't been there since the 1970's but it really doesn't look like it has changed that much. Many people these days?

The park reached peak visitation at almost 4 million and then fell back to just over 3 million when they upped the entrance fees and had some fires that closed the park for a few days. I think it is climbing back up again. Compared to the 70's, I think you would find that the crowds are being managed better, with more people on foot, and some roads closed to regular traffic. Still, I prefer to visit in the off-season, and during the week!

Well of course it's Yosemite. Nice to go in the off season when not so busy. Love the misty look and tribbles.

We have been Very Busy. I think the Ken Burns production has sparked more Americans to visit. Yet there is a carrying capacity. Hate to see us love our parks to death.

Your photos are great. The last one made me think of "Cousin It" of TV's Addams Family, and his family taking a dip! Your site is so informative and educational - I have difficult times hiking anymore, but I grew up hiking and loved many areas you speak of; although many younger years I spent in NYS Adirondack Park.

Thanks MarkEthan. I know how hard it is for many people to see these places for many different reasons (including in my own close circles), which is a main reason I share these pictures!