Omigosh, They Sold Yosemite Falls to Retire the National Debt! Whatever Will We Do??

I think they're gonna use it in a new amusement park! 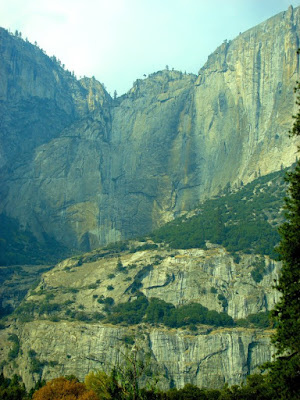 I'M KIDDING! I just wanted you to think about something. Yosemite Falls is just spectacular this time of year, but would you visit Yosemite Valley if you didn't get to see it? Is there another reason to visit the valley, waterfall-wise? I got to see two nice candidates during the high runoff last week. It is true that both of these falls dry up relatively quickly in the late spring or early summer, but when they flow, they are world-class. 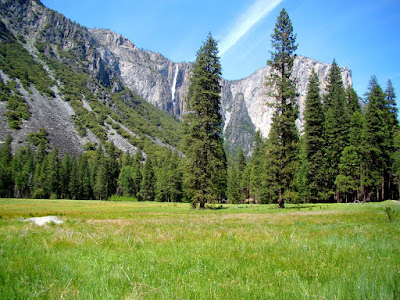 I saw the first of these from a new spot last week...somehow, I've never stopped at Bridalveil Meadow before (in 80 trips!!). Viewed from the southwest edge of the meadow, Ribbon Fall leaps off the cliff and falls for 1,612 feet, making it the highest single drop of any waterfall in the valley (Yosemite Falls drops 2,425 feet, but does so in three parts, the tallest being 1,430 feet). Combined with the west face of El Capitan, it makes for a memorable view. 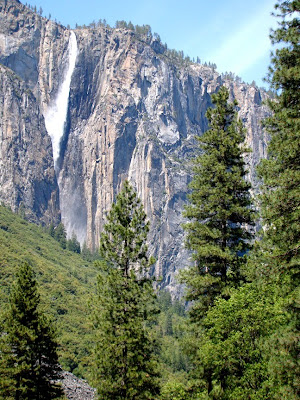 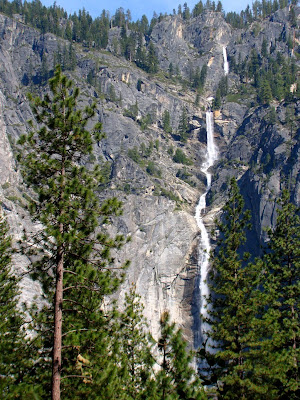 Another fall that reaches for majesty in the spring runoff is Sentinel Falls, which drops 1,920 feet in five steps, the largest of which is 500 or so feet. It is accompanied by the incredible Sentinel Rock, to the left in the picture below, one of the other "not always noticed" rocks in Yosemite. I call it that because to see it, you have to turn and look away from Yosemite Falls, if you can. It's behind you! 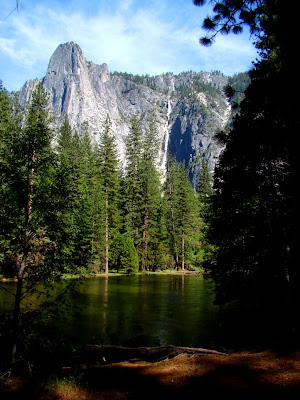 If you ever have a chance to see Yosemite in the spring, go for it! If not, enjoy the pictures, it's the reason I put them up (and I would like to see some more spring pictures from the places I can't get to, too).
Posted by Garry Hayes at 6:01 PM

I love seeing all this falling water and like Sentinel best.

Yea, yea, there will be spring at the canyon eventually.

sentinenl is a favorite of mine but i love (excuse the spelling) illouette falls! another ephemeral i like is silver strand. and then of course stair case falls are nice too and then......I LOVE THEM ALL