More Dangerous Than Cocaine, #3: Don't Worry, Be Happy, the Pushers say it's OK 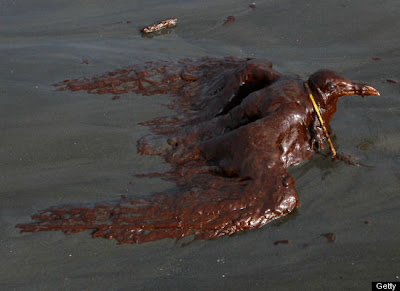 Don't worry about the oil spilling into the Gulf, Rep. Don Young (R-Alaska) says, because the worst spill in U.S. history is "not an environmental disaster," just nature taking its course.

"This is not an environmental disaster, and I will say that again and again because it is a natural phenomenon," Young said after Congressional hearings last week. "Oil has seeped into this ocean for centuries, will continue to do it. During World War II there was over 10 million barrels of oil spilt from ships, and no natural catastrophe. ... We will lose some birds, we will lose some fixed sealife, but overall it will recover."

Disputing scientists' claims of large oil plumes suspended underwater in the Gulf of Mexico, BP PLC's chief executive on Sunday said the company has largely narrowed the focus of its cleanup to surface slicks rolling into Louisiana's coastal marshes.

During a tour of a BP PLC staging area for cleanup workers, CEO Tony Hayward said the company's sampling showed "no evidence" that oil was suspended in large masses beneath the surface. He didn't elaborate on how the testing was done

"But it's just as possible that what happens here will be manageable and of moderate and even minimal impact."

Oil has not started washing up on shore in any large quantities, and Barbour likened much of the spill to the gasoline sheen commonly found around ski boats.

"We don't wash our face in it, but it doesn't stop us from jumping off the boat to ski," Barbour said.

"Come on down here and play golf, enjoy the beach, catch a fish and pay a little sales tax while you're here,"

And thus it begins. In this strange alternate reality, oil spills aren't that bad, they are natural events, they are caused by environmentalists, animals are not dying except for the few who smother in oil. And BP cares about the people along the Gulf Coast far more than their stockholders, who just got their $10 billion in dividends.

I feel so sad for the residents of the Gulf Coast, and I feel sick to my stomach that the pushers are telling us our addiction is ok. As long as they get their money. We are being played for fools.

UPDATE: Rachel at 4.5 Billion Years of Wonder was on this yesterday
UPDATE #2: Brian at Clastic Detritus follows up on a Twitter discussion that has been going today
Posted by Garry Hayes at 8:41 AM

Oh my god, this oil-spill-is-natural meme deserves a serious take down.

The fricking "oil is natural thing." I saw that yesterday and my head almost exploded.

I actually also made the mistake of looking over Sarah Palin's facebook post. I expect burning stupid from her, but what really depressed me were the comments. I should know better than to look at those by now.

What kind of idiot mentality is this!