The "Piping Feature" at Guatemala City: Don't Call it a Sinkhole 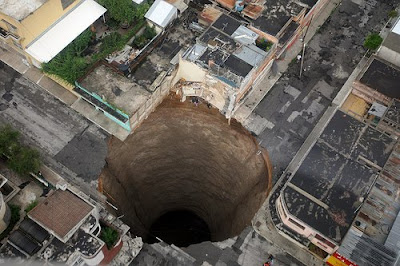 Thank you to the always reliable Andrew Alden at About Geology for this note. I looked at these pictures about the giant hole that opened up under Guatemala City following the tropical storm. Most news reports called the gaping pit a sinkhole, but something didn't quite seem right about the appearance of the feature. Sinkholes usually form in areas where limestone has been eaten away from beneath by the slow dissolving action of acidic groundwater. Eventually a cavern opening becomes too big and the ceiling collapses, forming the sinkhole. This one just looked wrong, with the more or less uniform looking tan colored material and the sheer vertical walls.

Michael Reilly provides a much more satisfying explanation at Discovery News. Much of the valley where Guatemala City is located is covered by up to 600 feet of loose pumice and volcanic ash, materials that can be easily eroded. When sewer pipes or storm drains break or leak, they can start eroding the loose materials deep below the surface, eventually causing the surface to collapse inwards. In the Discovery News article, geologist Sam Bonis refers to the feature as a piping feature. This isn't the first time such pits have caused problems in the city; in 2007, the pipe below destroyed twelve houses and killed three people (thanks to Discovery News for the link). The stench of sewage and the sounds of flowing water in the 330-foot-deep hole confirmed the origin of the problem. 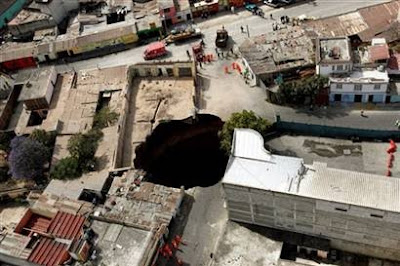 Unfortunately, the holes are apparently caused by human activity, not geologic processes...
The top picture from the Guatemala government Flicker Site, the bottom photo is from MSNBC News.
UPDATE: Oops, geologist Sam Bonis called a piping 'feature', not a 'structure'. I've made corrections.
Posted by Garry Hayes at 12:42 AM

There is a research in the surroundings of Naples (Italy) dealing with collapse structures in ash deposits (but much minor in extension and expression) – the authors assume that is canalized water flow (pipe flow) that washed away material in the underground.
Similar effects are known from fluvial gravels, finer material is washed out, until the remaining pebbles collapse like a house of cards

P.S: For the problem with the correct designation : Isnt a "Piping Structure” not also referred to volcanic degassing?

Interesting. I would have said it looked way to perfect in shape to be a sinkhole. The media rarely knows how to get things right.

Really intrsting the giant hole is too big and i got scared when i view it... you have explained this all suituation in very intgrsting way ...

I find the nearly perfect walls fascinating. Is there any possibility that this was hand carved in ancient history and covered over somehow with ash, debris, or whatever until it was long ago forgotten? Or were the walls carved out by the swirling water as it drained downward, like it swirls in a bathtub?

I think the walls are smooth and circular because the underlying material is loosely cemented - the hole is round because any projections or irregularities would tend to be the least stable and be more likely to collapse. In a sense, kind of like a sand pile is round (pouring sand onto a pile, it flows down the sides equally in all directions without irregularities.

This sort of thing looks more like a volcanic pipe(or primary vent) feature that was later filled. The fact that the point of the sinkhole is the highest local elevation further suggests that it is an eroded volcano. The pipe's fill is not bonded to the volcano, so it could slide down providing there were no support from below(presumably due to water erosion).