A Few Snapshots for a Sunday: High Water in Yosemite II 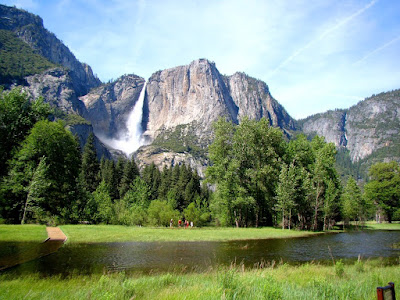 I talked in yesterday's post about the familiar places in Yosemite, places like Yosemite Falls. There is a reason they are famous, and seemingly the focus of almost every tourist picture: they are truly spectacular, especially at times like last week when the runoff is at a peak. I have hundreds of pictures of Yosemite Falls, and as of Tuesday, I have two dozen more!

The Merced River was at flood stage, running at almost 7,000 cubic feet per second, and a number of meadows were filled with overflow from the river. You can see how the walkway is flooded in the picture above. Floods like this are not at all a bad thing, at least not from a natural point of view (displaced tourists may disagree). The flooding brings in new sediment, and floods out tree roots, preventing young saplings from encroaching on the meadows. 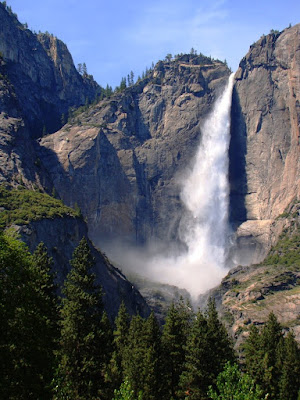 Yosemite Falls is unique in the way that it plunges over a vertical cliff, dropping 1,430 feet in an unbroken fall. The water collects into a series of rarely seen cascades for 700 feet before finally tumbling over 320-foot Lower Yosemite Fall for a total drop of 2,425 feet. By various measures, the fall is the highest in North America, and somewhere between the 5th to the 20th highest in the world (Angel Fall in Venezuela in the highest in the world at 3,458 feet). 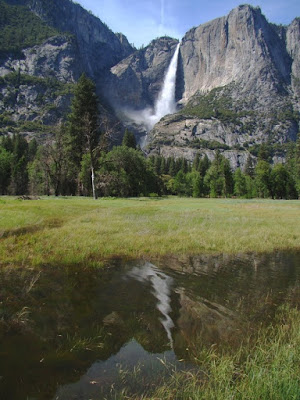 I was always intrigued by the cleft to the left of the falls. It looks like a river channel, but carries no water to speak of, even during high runoff periods. The trail to the top of the waterfall employs the break in the cliff to reach the valley rim. I thought about it, but never had the insight I needed to complete the story. N. King Huber filled in the story in his wonderful book, published posthumously, Geological Ramblings in Yosemite. I've told the story in a previous post, but in a nutshell, the river used to follow the left channel until it was diverted by a glacial moraine during one of the last ice ages, causing it to spill over the cliff instead. 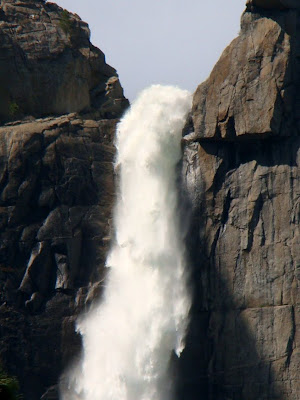 And what a plunge it makes! I've spent many happy hours of contemplation, just watching a single pulse of water break over the cliff, and follow just that pulse for the quarter mile drop. 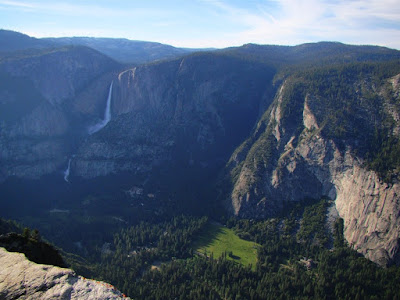 From the valley floor, the water seems to spring from the cliff without an obvious source, but a look at the falls from Glacier Point on the south rim of the valley shows that there is clearly a drainage area above. The road to Tuolumne Meadows traverses the headwaters of Yosemite Creek, and there is a small campground on the creek several miles upstream from the falls.
Yosemite Falls is a familiar sight, but it never once has looked the same to me. Every visit has been different, and last week it was spectacular!
Posted by Garry Hayes at 9:28 PM

I love the close up of the plunge! Almost like being there.

King Huber was a nice guy, very contented fellow in my experience with him at the USGS. I think it was because he had the world's best field area.

We were there last week, too. Wasn't it magnificent? I never tier of this place, it is wonderful in all seasons, but last week it was Yosemite at its best!

Martha, it was great! I linked to your pictures in the next post.