The San Andreas Fault in Southern California: What does a Wake-Up Call Sound Like? 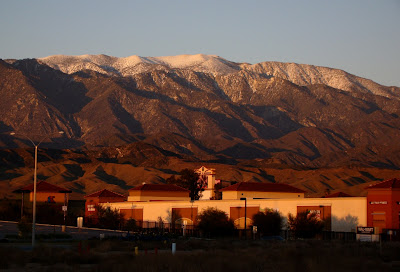 Those who live, or have lived, in Southern California may have wondered once or twice why there are 11,000 foot high mountains situated adjacent to valley at close to sea level (San Gorgonio Peak looms above Banning in the picture above). The reasons invariable point to the multitude of active faults that slice through the crust in the south state.

This might sound like another post where the Easter day Cucaph El Mayor Quake or some other event is used as a reminder that my SoCal friends live in earthquake country, and it is something like that, but not entirely. Science doesn't actually work the way media portrays it, where there is a sudden insight, and suddenly there is the solution to the problem, and everything is suddenly understood. The movie that comes to mind is 1995's "Outbreak", where they catch the damn monkey, and twenty minutes later they are injecting the sick people with a serum from said monkey that cures the pandemic disease. No, science is not like that at all. Scientific discovery and insight is incremental.

I was reminded of that as I thumbed through my newly arrived edition of GSA Geology and caught this article about some of the latest research on the paleoseismic history of the San Andreas fault in Southern California (author's page with full article link is here). The team has spent a decade or more documenting paleo-earthquakes on the San Andreas fault going back 3,000 years at a site near the mountain village of Wrightwood, which sits right on the fault. What they have documented is ominous: 29 major quakes in two distinct periods covering 3,000 years (major quakes defined as magnitude 6.8-7.9 with at least several meters of surface offset). That's an average recurrence interval of only a century or so. Only two of these quakes are historic, an 1812 event and the 1857 Fort Tejon quake.

At issue is whether major earthquakes on the San Andreas system are periodic or whether they cluster, with several events in a few decades followed by a long period of quiescence. Finding paleo-earthquakes is not the easiest task, which helps explain why this is a decades-long project. Most of the work is accomplished by digging deep trenches across the fault in places where sediments are most likely to reveal past ground disturbances. The illustration below, from an earlier paper by the same group shows how a fossil earthquake looks in a trench wall. The lower layers are offset, but the upper layers are not. If one can find the age of the oldest undisrupted layer, the timing of the quake can be resolved by radiometric dating of carbonized wood or snail shells. 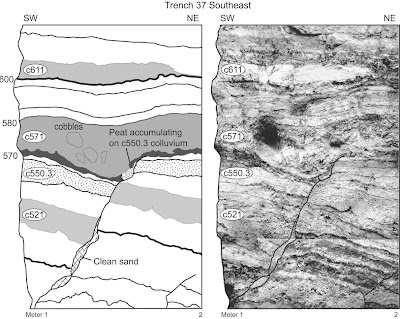 Fossil earthquake from Scharer et al., 2007
So, each couple of months reveals more and more information until there is enough to start to draw some conclusions. The judgement in this month's report is that the quakes are more periodic in nature than clustered. But the last line of the abstract is the most ominous, and made me sit up: it's been 153 years since the last major earthquake on the San Andreas fault, and out of a record of 29 major quakes, only 4 times has there been a time gap that long. In their words, this is "highlighting the current hazard posed by this fault". What that means is that the fault is severely overdue for a major ground-rupturing quake.
What does a wake-up call look like? It looks like three magnitude 7+ quakes in isolated corners of California and Baja California (1992 Landers, 1998 Hector and 2010 Cucapah El Mayor) that killed few, but would have been catastrophes if they had occurred closer to major urban centers. A repeat of the 1857 event would devastate Palmdale and San Bernardino. Damage would be widespread throughout the Los Angeles basin. What do you do with a wake-up call? Do you go back to sleep? How many of you, after the Easter quake, decided to put together an emergency supply kit, one for the house, and one for your car? How many of you did it? Tens of millions of people are sitting in the path of the oncoming quake, and few are really prepared.
One of the great many factors that led to the horrific catastrophe in Haiti last January (and I hope you are remembering them and sending donations) was the lack of previous earthquakes in the collective memory of the population. They had never experienced a serious earthquake, and therefore did not expect, or prepare for one. In California, we don't have that excuse. We know they are coming. We have up-to-date architectural standards that will save many thousands of lives, but even with those standards, a death toll in the thousands, even the tens of thousands is possible. Think seriously about the coming quakes and make the preparations, not just for the quake but for the aftermath, when emergency services will not be available in many areas.
Posted by Garry Hayes at 1:11 PM