Now THIS is why I love California beyond words (but I will use words anyway!) 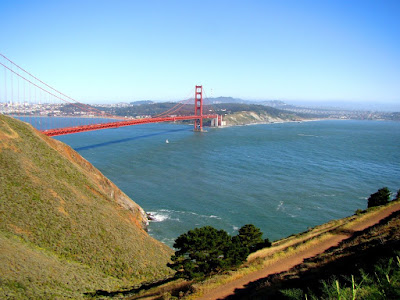 California gets a lot of crap from around the country for whatever reasons (San Francisco liberals, Berzerkely, L.A. riots and floods, earthquakes, the whole nine yards), but you know what? I think people are just jealous, because my fair state is one of the most beautiful and interesting corners of planet Earth. Today provides a fine example.
I've been blogging a lot about Yosemite National Park of late, and frankly, lots more is coming, but I had an errand in the San Francisco Bay area this afternoon. Yosemite is a two hour drive from where I live. The Golden Gate Bridge is a two hour drive from where I live. My home town routinely comes up 49th or 50th out of 50 on those "best places to live in America" lists, and it has its problems, but I bet a lot of my geology friends would give up a lot just to be able to play in the snow for a few hours before heading to the beach to work on that sunburn. Or to put it more, eh, sophisticated-like, to go from the granite intrusions of a Mesozoic magmatic arc to the deep heart of a fossil subduction zone in the space of a few hours. 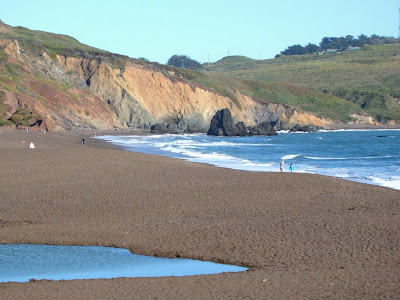 So, a few pictures of what we did after we finished our errands. We headed out onto the Marin Headlands, part of the Golden Gate National Recreational Area. The headlands are those dramatic hills at the north end of the Golden Gate Bridge. There's a winding narrow road that traverses the cliffs above the bridge, providing incredible views of the sea cliffs and San Francisco, which just has to be one of the prettiest cities in the world. The road ends at Rodeo Beach (picture above), which is just another typical northern California beach, meaning utterly breathtaking. 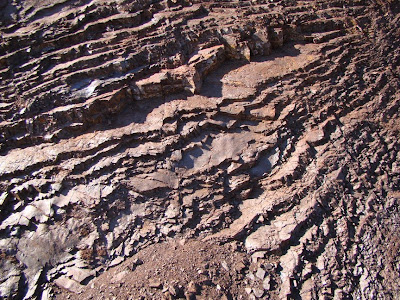 The rocks are strange; deep red brown and black, occasionally gray and green. The deep red layers in the picture above are ribbon cherts from the ocean floor, while the black bulbous looking rocks in the picture below are pillow basalts. They are the remains of deep ocean sediment and oceanic crust that were swept into the subduction zone that lay off the coast of central California from around 200 million years to as little as 10-15 million years ago (it's still there in the northernmost part of the state). The destruction of the subduction zone was the origin of the San Andreas fault, which lies just offshore of here. 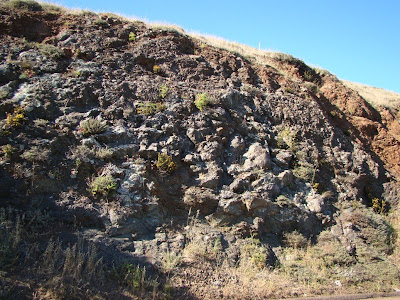 If you are looking for the white sand beaches of the Bahamas or Florida, you won't find them in this part of California. Those beaches are made of quartz grains or coral fragments. In Northern California, the sand is composed of the same grand selection of minerals that are found in the rocks of the nearby cliffs, and almost any color can be picked out of a handful (for my sed-pet friends, yes, this is a gravel, not a sand sample; but it shows the colors better!). 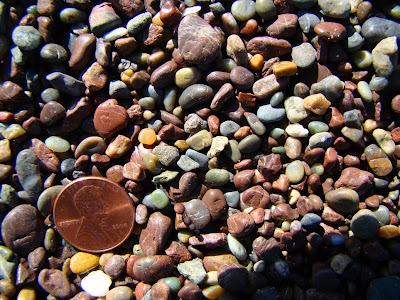 An exploration of the roads around the tops and sides of the seacliffs reveals a bunch of strange looking concrete structures that are clearly old, and clearly abandoned. It turns out that if the Japanese Navy had ever decided to enter San Francisco Bay to cause havoc during World War II, they would have faced a devastating barrage of artillery fire coming from these concrete bunkers. 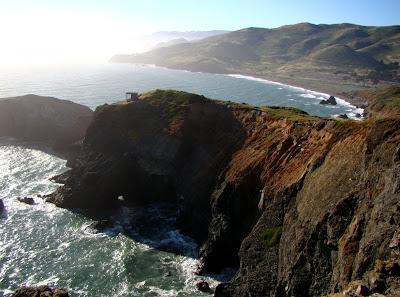 Today, these cliffs and rocky islands are home to hundreds of thousands of birds. The Marin Headland, clear-cut of lumber in the 19th century, covered with structures of war in the 20th century, is now a place of tranquility and contemplation. Sometimes we do a few things right...

I love it as well ... it is indeed a special place

SF is my favorite US city and the beaches can't be beat. Did I see some agate amongst those pebbles? Just south of the city along the coast I once crawled thru a tunnel dug during WWII that opened onto a tall bluff with an excellent view.

The southern part of the state is pretty fantastic, too. On Memorial Day weekend there were people who went snow skiing and surfing in the same weekend. And there's plenty of great scenery, too. Some of my favorite views are on the Channel Islands.

I grew up in southern California, and there are some wonderful mountains and deserts out there! I especially loved hiking the San Jacintos.

"The rocks are strange; deep red brown and black, occasionally gray and green."

Rocks in California ARE strange, to most people anyway. Granted, not so strange when it is where you live...

Love your photos. I just wrote a post 5 Things I Love About My State (CA) and I linked to your post. The rest of your site is pretty awesome too (the photos add a alot!)