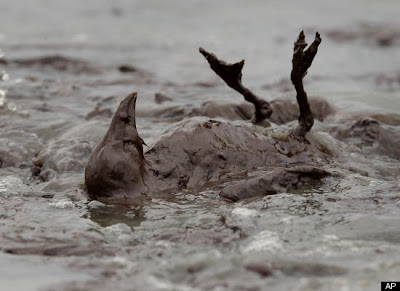 Photo from AP via Huffington Post (more here)
A drug addiction goes through stages: the highs, the loss of the high, the stealing for a hit, and then one starts hurting those around them to maintain the habit. And then gets worse, it's harder and harder to support the habit. And eventually one hits bottom.
It's been more than a month since my first post on the BP oil spill. The full magnitude of this disaster is still just beginning to evolve. I hear they've been trying to prevent the media from showing pictures of dead and dying animals. I wonder why? I've heard the money comparisons coming from Louisiana: offshore oil drilling produces several tens of billion of dollars annually and fishing only a billion or so. Choices. The oil is going to curl around Florida and move up the eastern Atlantic Coast. But we shouldn't stop offshore drilling; we know NOW how to keep it safe. Oh, and the whole disaster is the fault of environmentalists because we won't let them drill every last spot on land (Palin...again).

At what point will the media and the politicians start asking the right questions? When are we going to face our addiction, and take real steps towards breaking it? Do we do it when we still have good choices, or do we wait until our only choices are bad ones.
Once again: there isn't enough oil. We can't drill our way out of this problem.
Posted by Garry Hayes at 9:47 PM