The Yosemite No One Sees in Summer...the Merced River Canyon 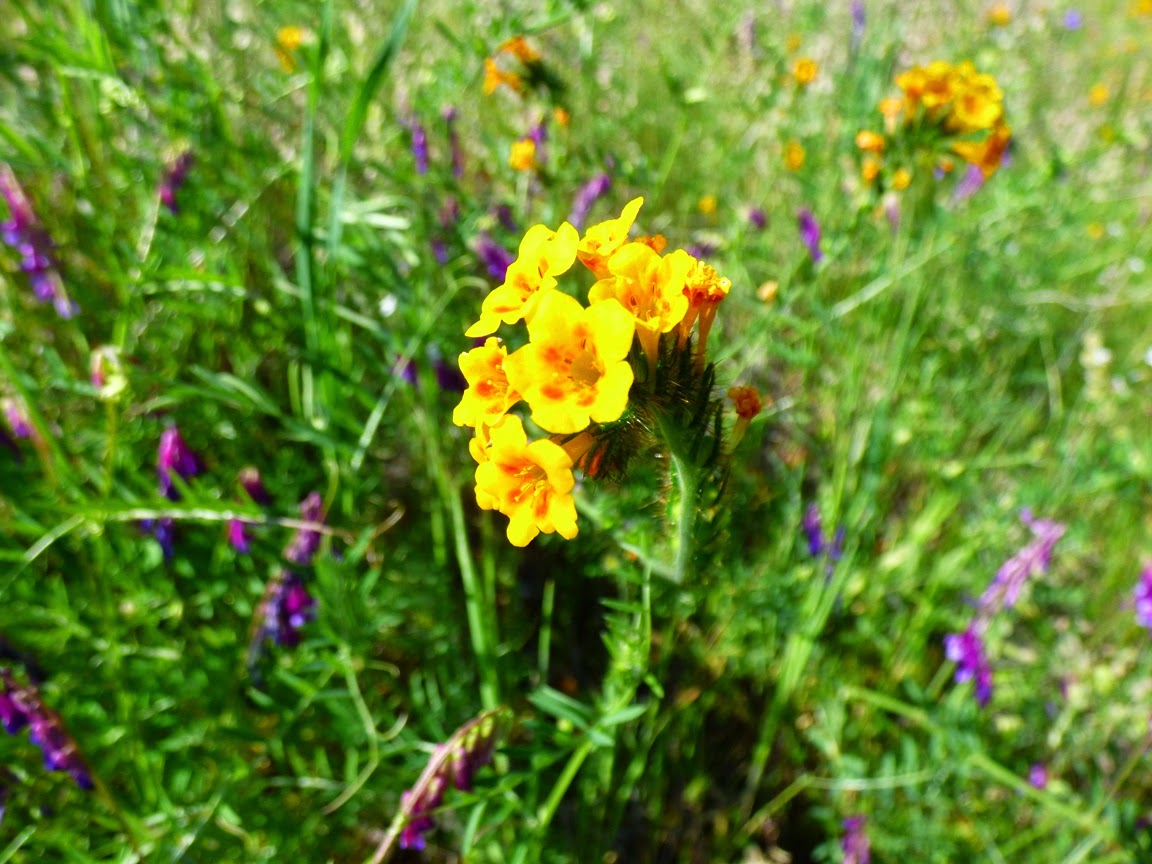 The drought in California is horrific. It is quite probably the worst drought in centuries, but we received a slight respite in the form of showers and snow during the last part of March and early April. It was a drop in the bucket towards relieving the huge water deficit that has built up in the last few years, but it gave a shot of energy to the seedlings of grasses and wildflowers. They perhaps should have sprouted and grown months ago, and they will be dried out in a few short weeks, but this week, the Sierra Nevada foothills were alive with color. 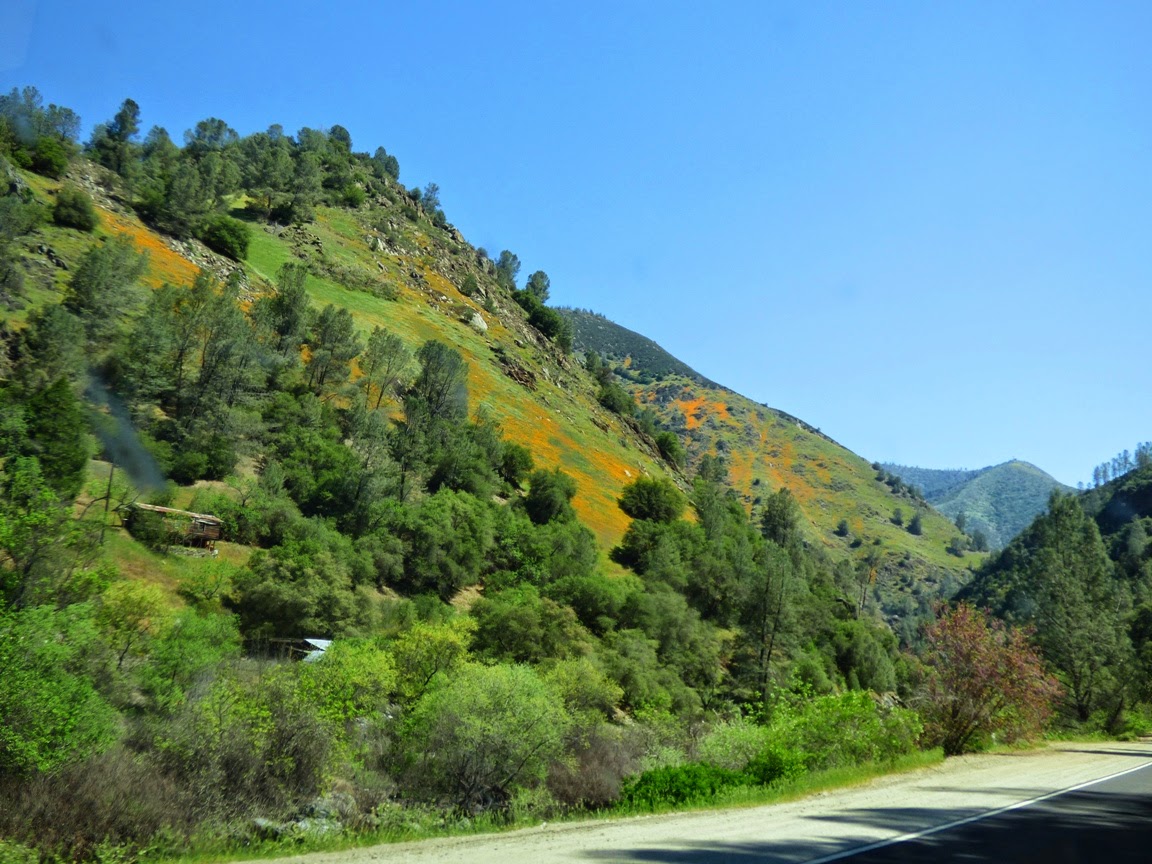 We were on our way to Yosemite Valley for our geology field studies course last Saturday, and I joked (only in half-jest) that the students had to "earn" the right to learn the geology of Yosemite Valley by first exploring the canyon of the Merced River. We had to prepare ourselves by undertaking a journey through the rocks that predate the granitic rocks that form the walls of the iconic valley. Our route took us through the foothill towns of Snelling and Hornitos, and then we drove up Highway 140 through Mariposa, over Midpines Summit and down into the deep gorge of the Merced River (originally the "Rio de Nuestra Señora de la Merced (River of Our Lady of Mercy)". 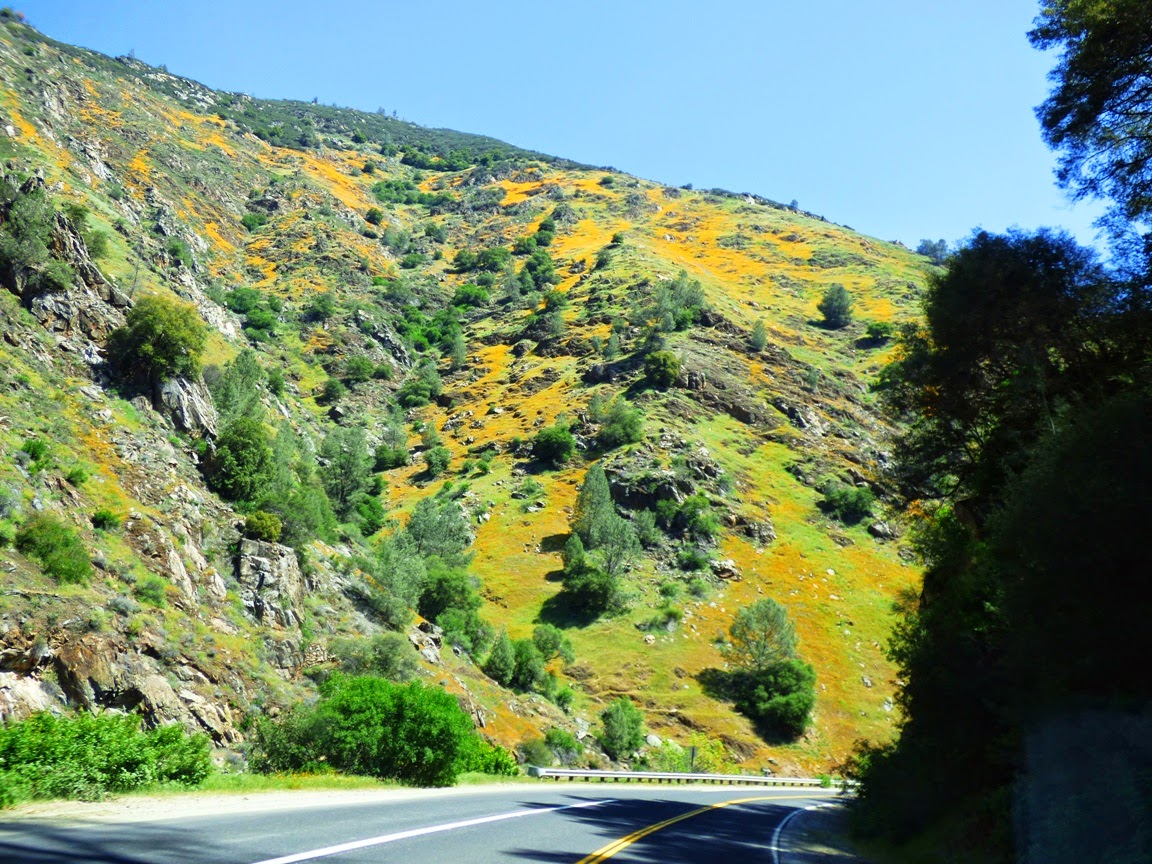 Highway 140 winds back and forth through a series of metamorphic terranes, bands of deformed and twisted rocks that traveled across the Pacific Ocean to be mashed into the western edge of the North American Continent. The rocks include slate, schist, marble, phyllite, quartzite and greenstone. These were the ancient rocks (between 600 and 200 million years old) that were intruded by the granitic rocks that eventually were exposed and eroded to form the dramatic cliffs of Yosemite Valley.

The Sierra Nevada is a huge westward tilted block. The slope has allowed the rivers draining the mountain range to carve deep gorges, some deeper than the Grand Canyon (Kings Canyon to the south is about 8,000 feet deep!). The depth of the Merced is more like 2,000 to 3,000 feet deep downstream of Yosemite, and in any other setting in most any other state, this would be enough for the establishment of national parks and the like. Instead, it is "just" the preliminary canyon one must pass through before arriving at Yosemite.

The carving of such deep canyons can have serious geologic consequences for society. The slopes of such canyons are inherently unstable, and mass wasting (landsliding) is a constant hazard. The building of roads and railways adds to the instability by undercutting the already steep slopes. Such is the case with Highway 140. CalTrans has struggled for years to prevent the collapse of a slope near the village of El Portal. In 2006, the slope flicked away the mitigation efforts and collapsed onto 600 feet of highway. The Ferguson Slide, as it is called, closed the highway for months and caused economic hardship for the surrounding communities. Two temporary bridges were constructed to cross the river and circumvent the huge slump. Decisions have yet to be reached regarding the permanent disposition of the highway. 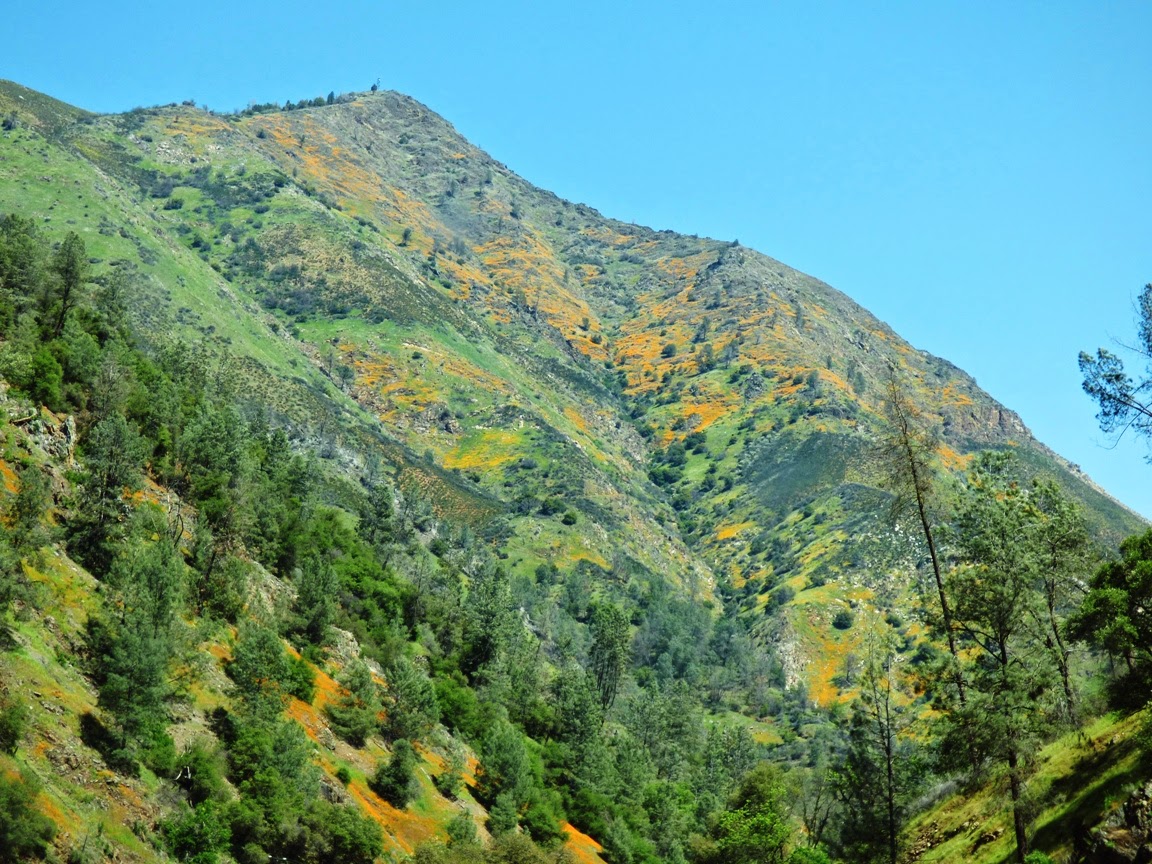 As we drove deeper into the Merced River Canyon, the slopes seemed to come alive in orange and gold. The California Poppies have reached the zenith of their blooming cycle. In contrast to my previous gloom and doom post regarding fires, rejuvenation does indeed occur, as many of these slopes have been cleared of brush and chaparral by repeated wildfires, allowing for dense concentrations of wildflowers.

We passed El Portal, and then the Yosemite View Lodge. The name is not totally dishonest; the boundary of the national park does indeed lie a few yards east of the hotel complex, so the view of the granite slope beyond is indeed a view of Yosemite. But it is not yet the iconic valley with Half Dome and El Capitan and Yosemite Falls. It is pretty, though, and the Merced River makes a dramatic dash through the maze of gigantic fallen boulders. 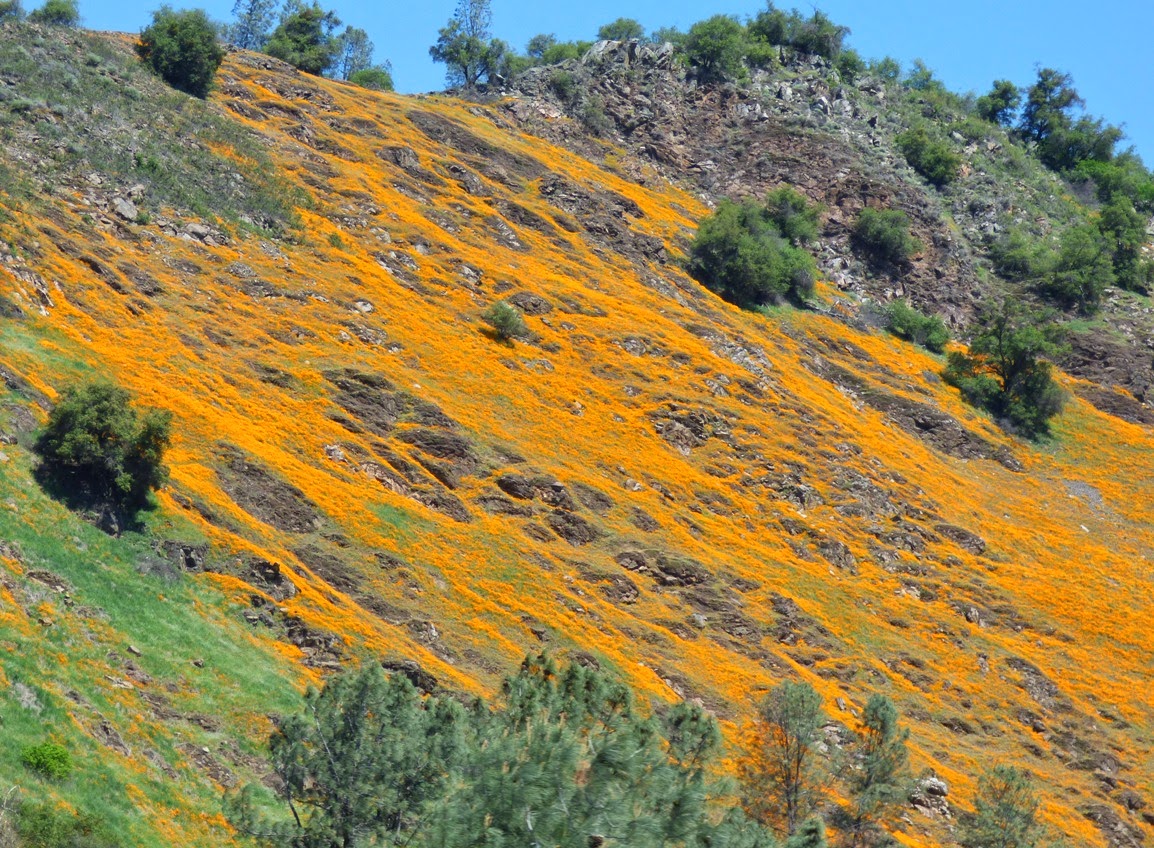 We arrived at the park entrance station, drove a few more miles, and made our last stop before Yosemite Valley. It was another site of mass wasting, but this time it was a rockfall, and it included granitic rock instead of metamorphic material. The so-called Cookie Slide took place in 1982, and involved around 100,000 cubic yards of material that bounced and fell down the slope onto Highway 140. Once again, the road was blocked for weeks. 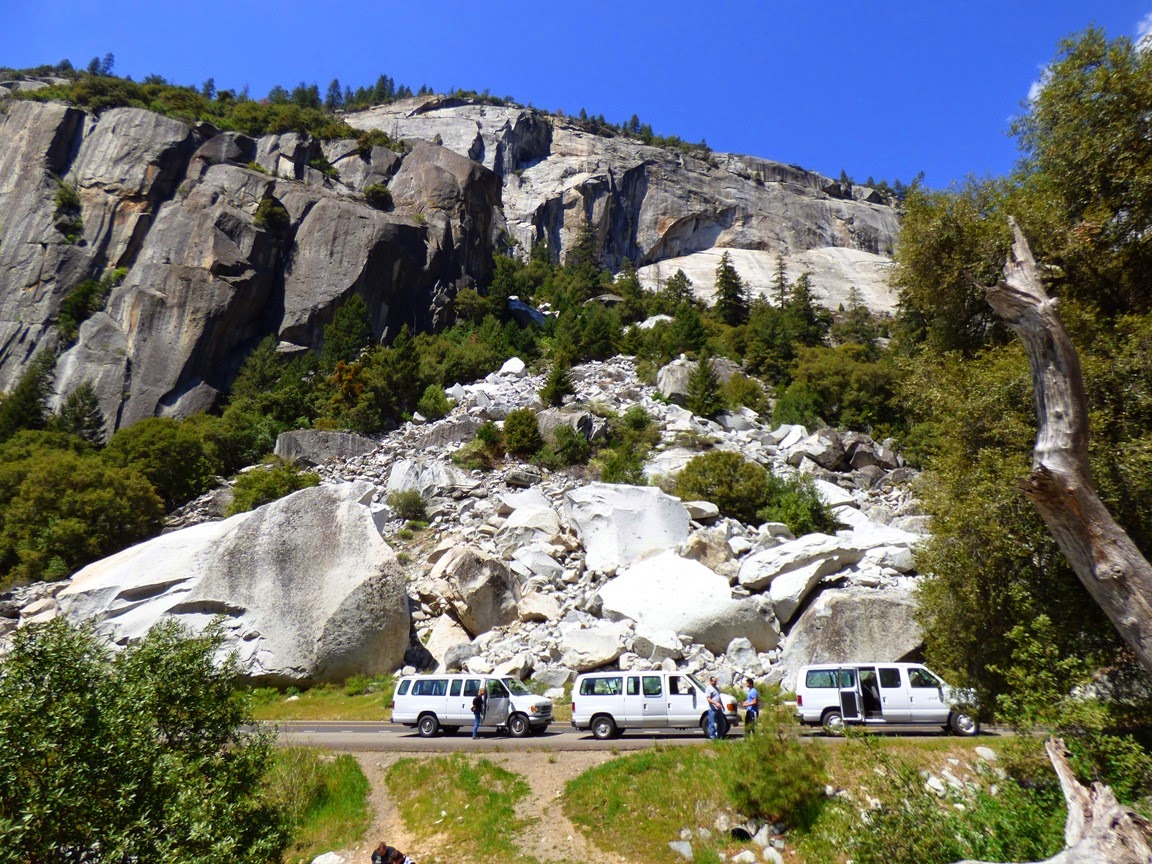 The size of some of the fallen blocks is astonishing. It's hard to see how a block like the one in the picture below held together during the downhill descent. 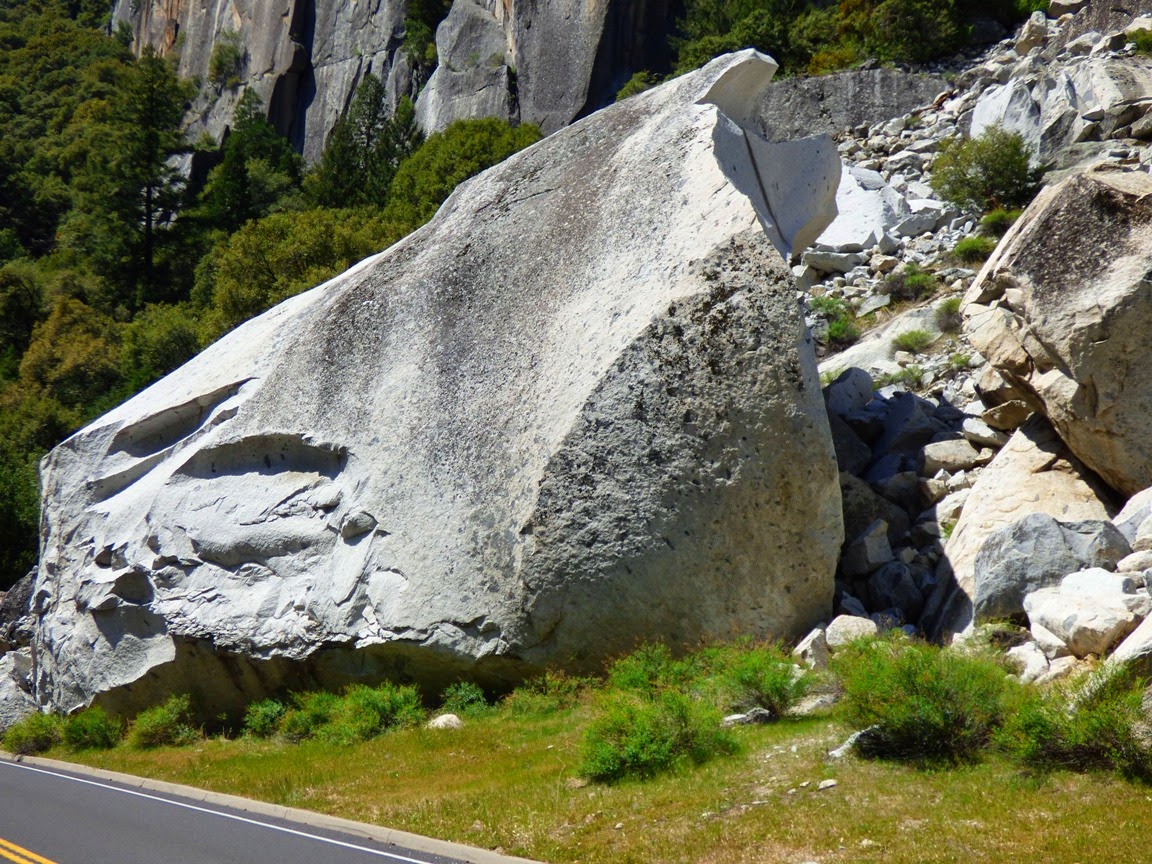 The rocks are part of an intrusive series called the El Capitan granite, which was intruded about 103 million years ago. A contemporaneous intrusion of dioritic rock lead to some co-mingling of magmas, including the enclave of darker rock in the granite (below). 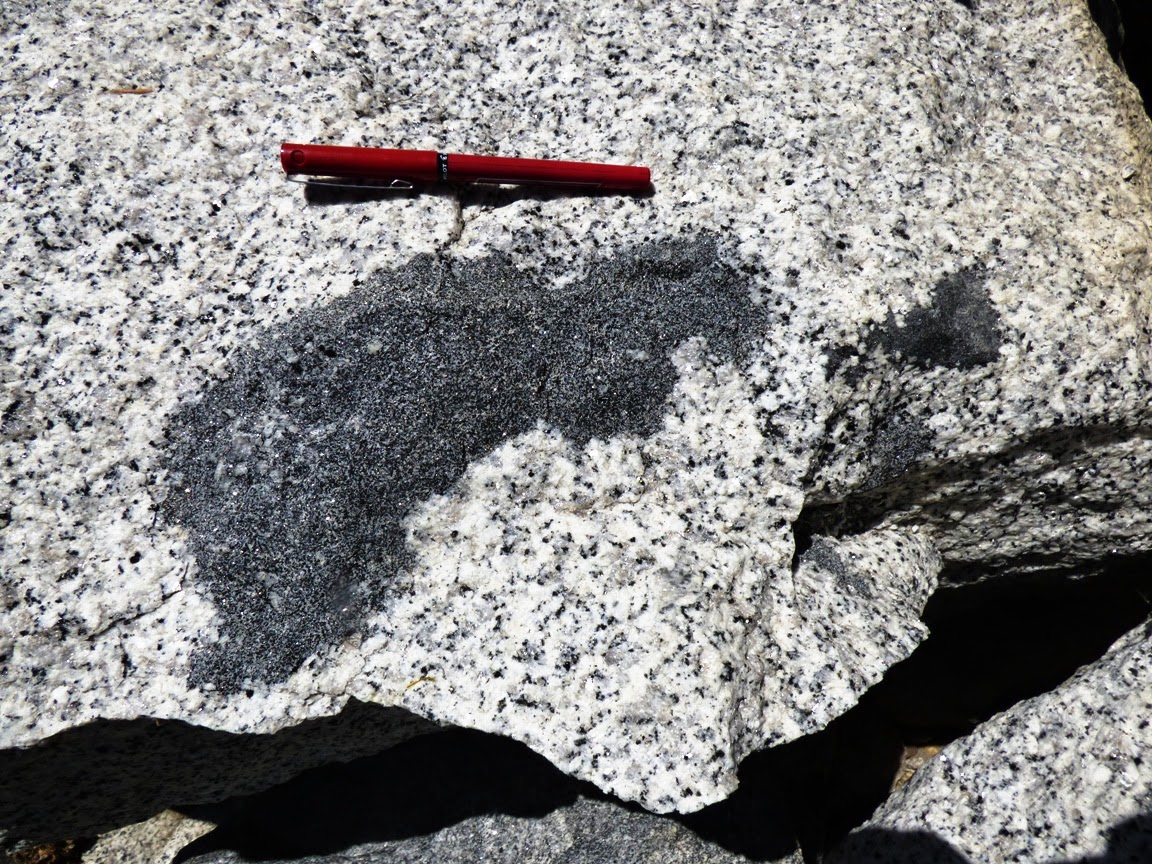 I've always thought of granite as a particularly beautiful rock. The sparkling mass of quartz (glassy gray color), orthoclase feldspar (white grains), and biotite mica is pleasing to the eye, and tells an odd story: Yellowstone National Park, off in Wyoming, sits on top of a huge magma chamber that may one day explode again (but not tomorrow). In Yosemite, we are sitting within a former magma chamber, under the volcano. As such we are exploring the inner depths of an extensive magma system, brought to light by long periods of uplift and erosion. 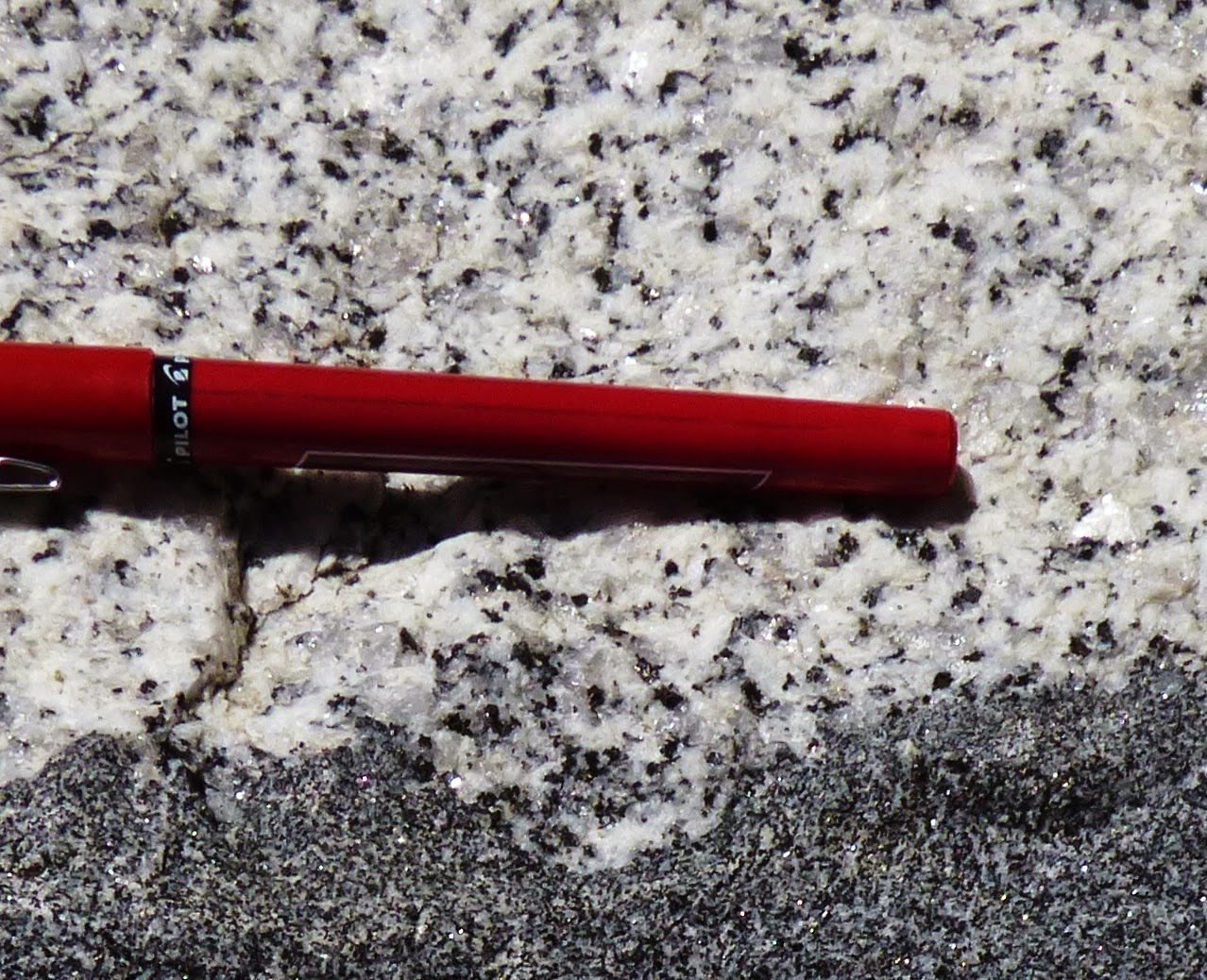 In a coming post, we'll see how Yosemite looked on Saturday.
Posted by Garry Hayes at 12:05 AM

What gorgeous pictures. I haven't traveled Hwy 140 for years but this post reminded me of the beauty of that area. Love your posts. I always learn so much.