Where are the Ten Most Incredible Places You've Ever Stood? My Number 9: Frame Arch and the Delicate Arch Trail 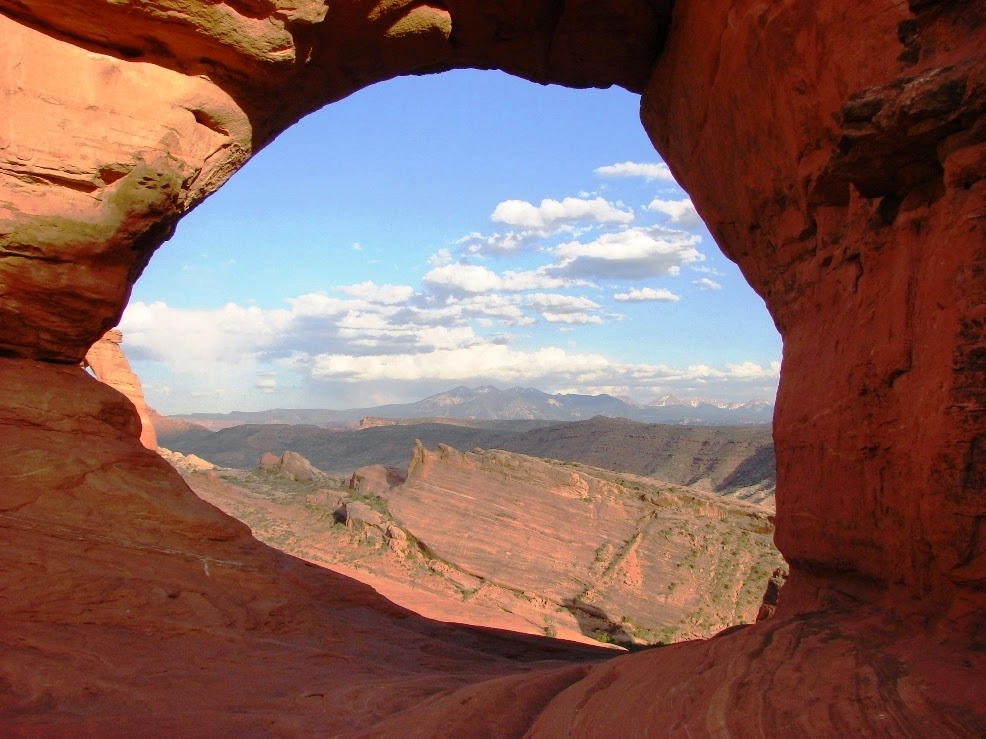 It's the journey through the Ten Most Incredible Places I've Ever Stood! As I explained in the last post, the list is subjective, and everyone's list will be different. I'm pleased at the response of many of you already listing your most incredible spots in the comments, and on my accounts at Facebook and Google+. I'm looking forward to seeing more! My own list is not in any particular order, other than my choice for number one. Folks will perhaps not be surprised to see that I selected the picture above for my number 9; it's the cover photo from my Geotripper Images website where I've posted a lot of my geological pictures for use in educational/academic projects. It is a view of the La Sal Mountains through Frame Arch at the end of the Delicate Arch trail in Arches National Park.

In the years before PowerPoint, I started all of my geology classes with a set of slides (this was an ancient technology that involved "carousel trays", "slide projectors", and "film") to introduce the students to the world as it is revealed by geological processes. The first picture was always this stretch of trail just short of  Delicate Arch. I chose it because it symbolized so much about the wonders revealed in the incredible history of our planet. 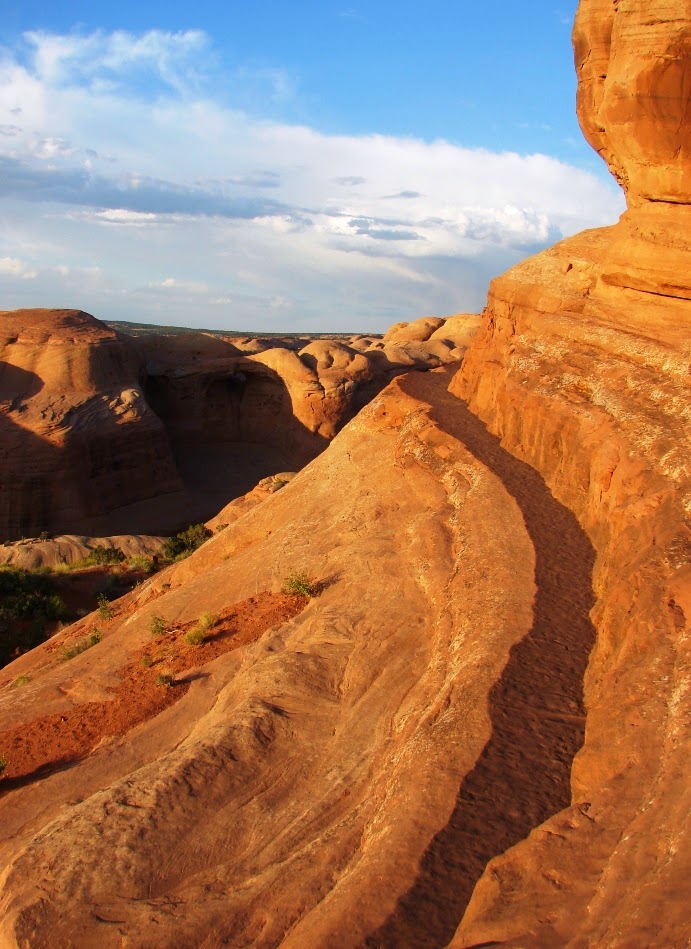 The trail is cut into a formation called the Entrada Sandstone, a layer composed mostly of  windblown sandstone as well is silt and mud in some areas. It once was a system of sand dunes near a coastal delta and estuary during the Jurassic Period around 140-180 million years ago. The trail surface is a natural separation along the surface on one of the dunes, so by walking on this trail we are striding on the same surface that dinosaurs, ancient mammals, and arthropods walked on many millions of years ago. We know that these rocks were buried deeply by thousands of feet of overlying rock, but they were pushed upwards by vast salt domes rising from older formations below. The doming effect split the rocks into linear fins, and the arches developed from weathering and erosion at the base of fins.

At one viewpoint an observer can appreciate the variety of depositional environments that led to the formation of the colorful Entrada rocks, the vast amount of time that the rocks lay buried in the crust, the immensity of earth movements that brought the rocks back to the surface, and the intensity of erosional processes that shaped the rocks into what they are today. And one can walk on a surface that may very well have been a trackway for a dinosaur many eons ago.

But (like they say in late-night television ads), there's more! Although many people use Frame Arch to frame Delicate Arch, I chose to emphasize the La Sal Mountains instead (the top photo). The La Sals represent the role of magmas in earth processes. The mountains are composed of intrusive rock that reached close to the Earth's surface about 25 to 28 million years ago. Some may even have erupted out in volcanic eruptions, but the rest of the rock formed into mushroom shaped plutons called laccoliths. The dioritic rock proved more resistant to erosion than the surrounding shale and sandstone, so the peaks rise 6,000 to 7,000 feet above the plateau surface. The highest peaks in the La Sals reach nearly 13,000 feet above sea level. 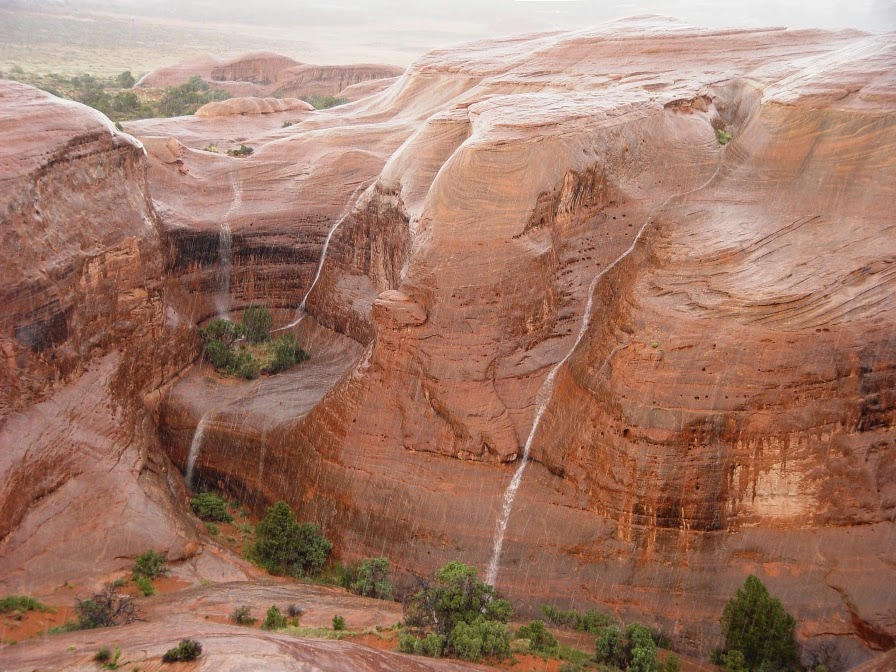 It's a scenic, even iconic spot for photographers and park visitors, but what makes this one spot special to me? It's the unique experience of each visit. It's been my privilege to visit this spot perhaps a dozen times in the last 30 years and every time it has been an awe-inspiring journey. We usually head up the 1.5 mile trail in the late afternoon in order to catch the sunset on Delicate Arch. Quite often there is a raucous crowd, and some moron always feels a need to go stand under the arch for an inordinate period of time, prompting shouted complaints from the large group of photographers on the ridge top. Frame Arch becomes the special spot at that point because there is only myself and a few of my fellow travelers. We don't hear the chaos and mayhem at Delicate Arch, and we can just sit and appreciate the changing colors and deepening shadows.

Once or twice we've been doused with a summer rainstorm, and in one particular year we took shelter under the arch and gloried in the lightning and crashing thunder, and watched as the dry sandstone transformed into a series of waterfalls and white cascades. It was one of the most cherished moments of my life. We assumed that the storm would obscure the sunset, but as quickly as the storm hit, it dispersed and the sunshine broke through to highlight the La Sal Mountains in the far distance. 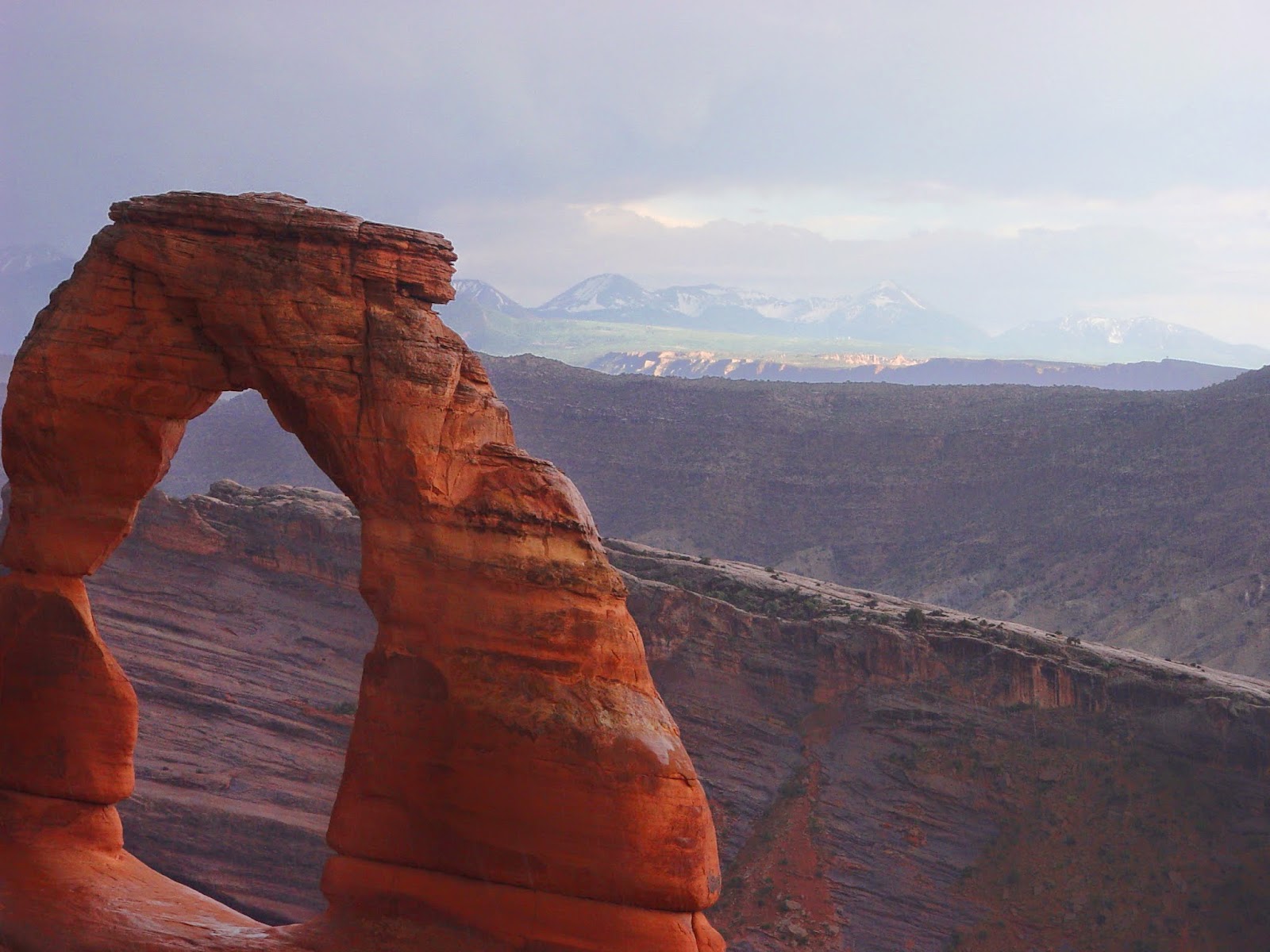 One more reason that this spot is on my incredible list is because of the ephemeral nature of Delicate Arch itself. It may not last my lifetime. The arch is only a foot and a half thick at one point, and there are valid fears that it could collapse in the natural order of events. Of course, humans may help it along; I've heard of at least one episode in which a man attacked the arch with an axe. Then again, it could last another thousand years. Who knows? In the meantime it is a magic place.

Once before I pass on I would like to see it in the snow.
Posted by Garry Hayes at 2:46 PM