Out of the Valley of Death: What the Heck Happened at Ubehebe? 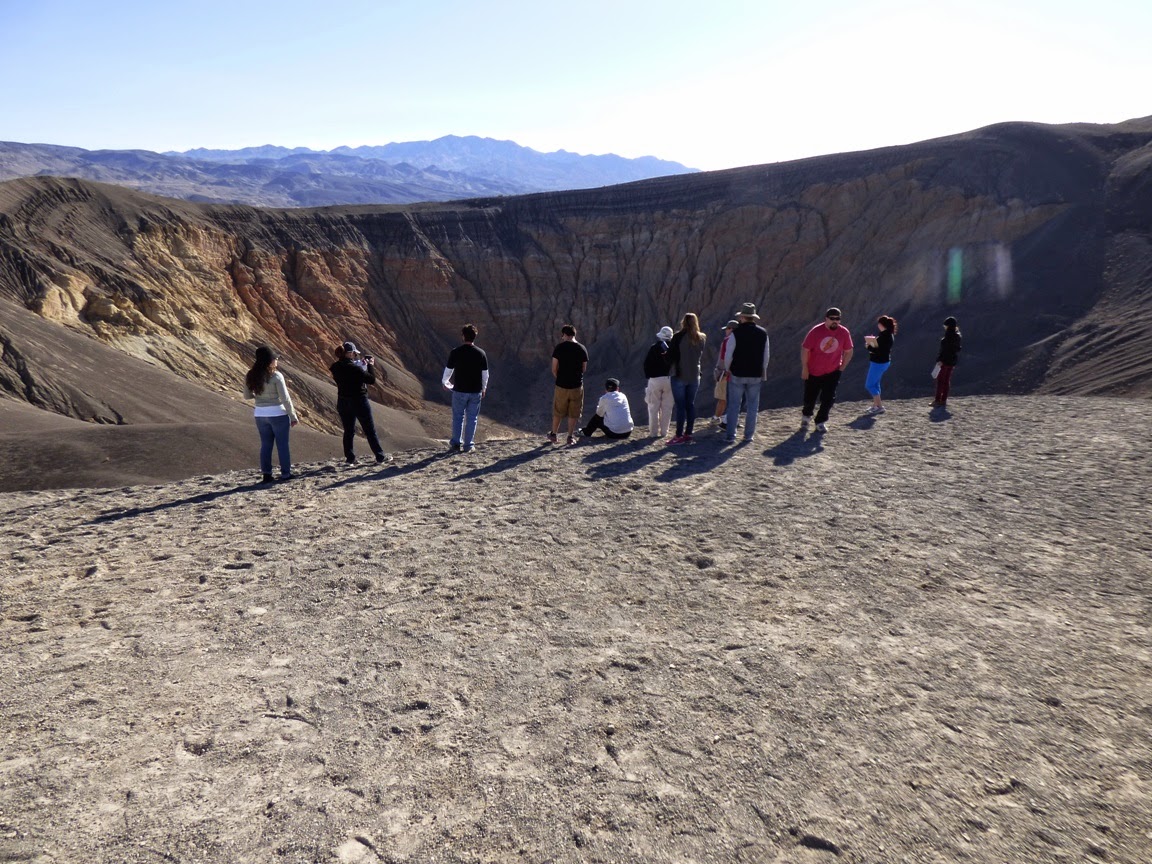 The geology at Death Valley National Park is naked and raw. Nothing is hidden beneath a soft matte of vegetation. It's in your face, all the processes of tectonism, volcanism, erosion, and deposition. Every era and most of the epochs of the geologic time scale are represented somewhere in the boundaries of the park. Not even Grand Canyon National Park can make that claim. On the previous day we had explored the oldest rocks in the American West, the contorted metamorphic rocks of the Black Mountains and the ancient sediments of the Pahrump Group.

Our first destination on our third day of exploration in the park was the Ubehebe Craters at the north end of the valley, a place representing the opposite extreme in time. The events that took place here can be measured in just hundreds or thousands of years. On the drive there we were treated to amazing views of fault scarps, sand dunes, and alluvial fans, which formed mostly in the last few tens of thousands of years. 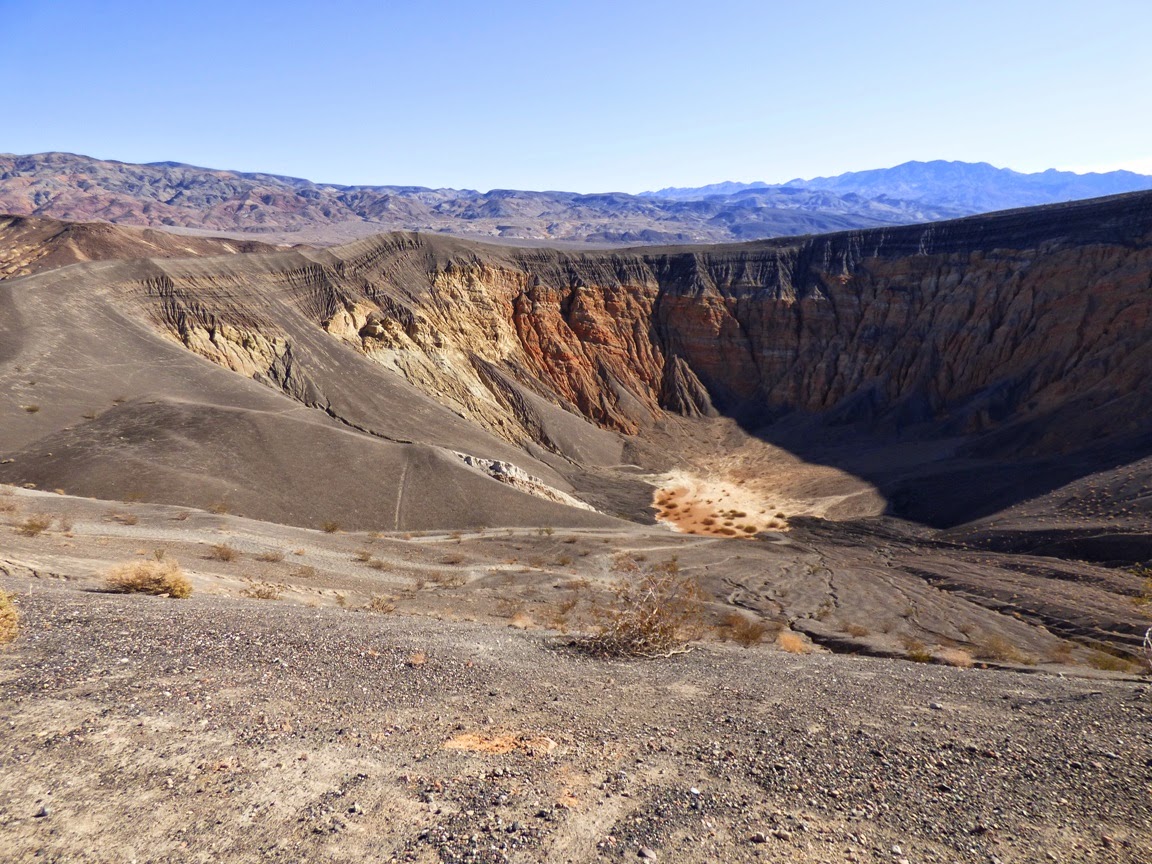 To arrive at Ubehebe Crater is kind of an otherworldly experience. For miles, the road has been following the broad rocky surfaces of the many alluvial fans that flank the Grapevine Mountains. The valley floor between the Cottonwoods and the Grapevines narrows and soon the alluvial fans merge in the center of the valley and in a few places the road climbs in earnest. But soon the Cottonwood Mountains come to an end, with the final ridge tapering down to the valley floor. We've reached some kind of a structural nexus. The formerly deep trough of the northern part of Death Valley seems to pinch out, and another valley merges with it from the south. The Ubehebe Craters have formed along the intersection of the faults that formed the valleys. The crustal weakness of the fault zones allowed the magma to rise from deep in the Earth almost to the surface. 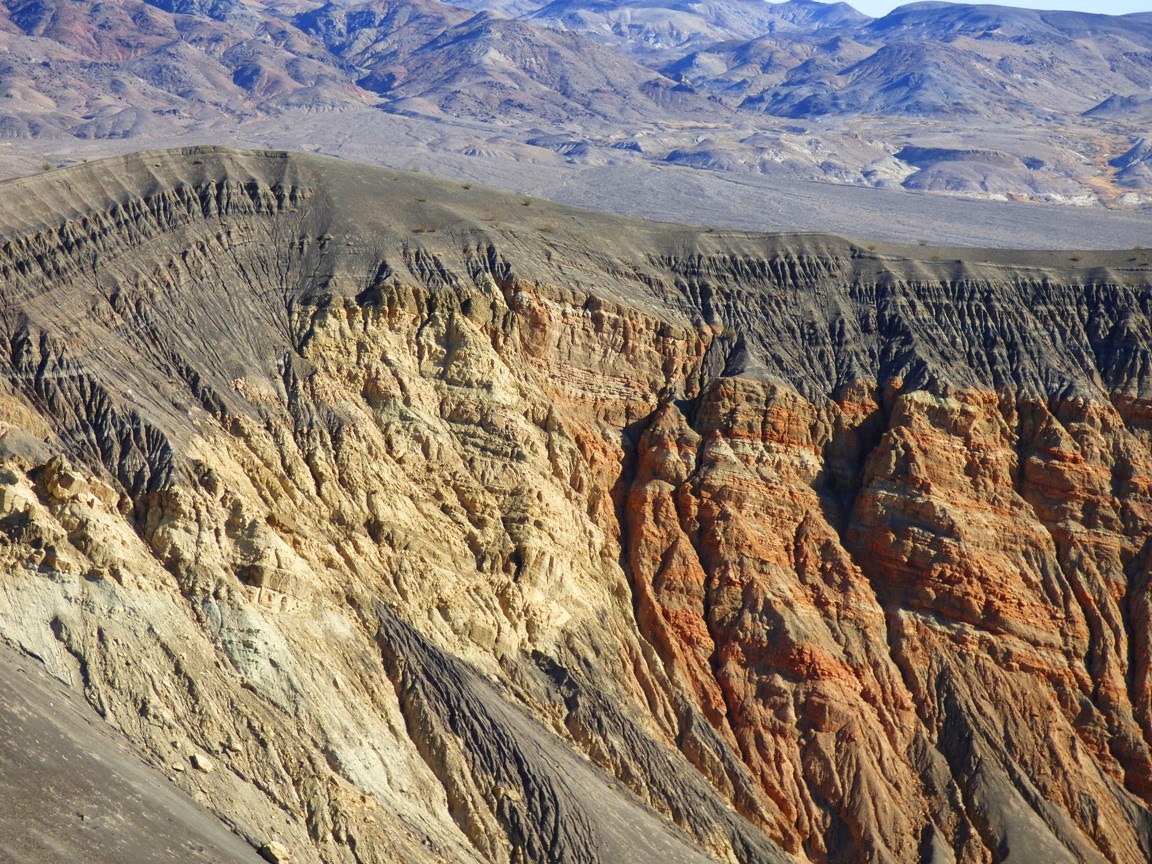 It's clear when standing on the rim of Ubehebe Crater that something big happened here. This hole is a half mile across (~1 km) and around 700 feet (215 meters) deep. Whatever happened here did so more than once. There are perhaps a dozen overlapping craters, and each of them is rimmed with dozens of layers that represent numerous explosions. What in the heck happened? 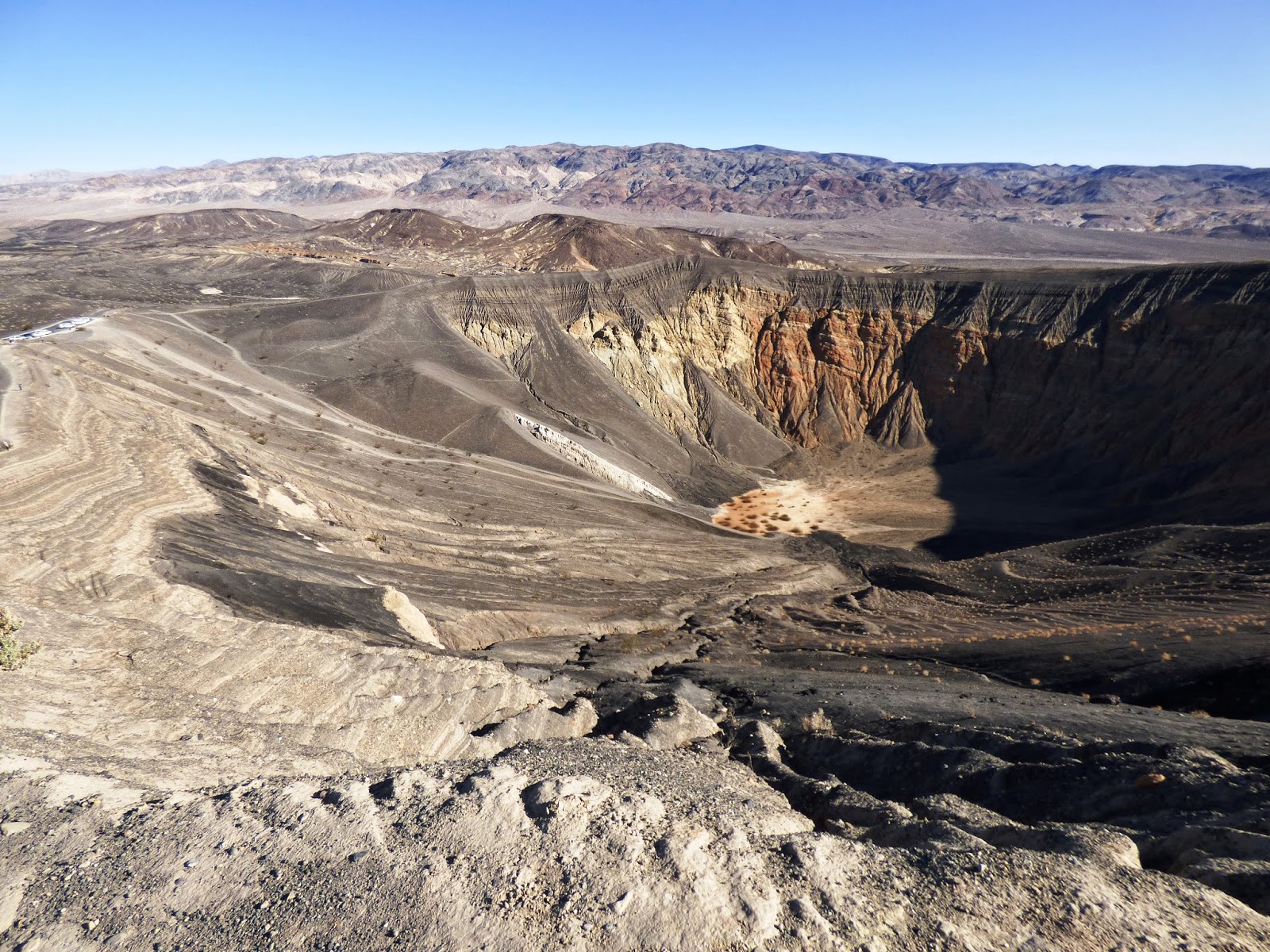 The red, orange and yellow layers below the rim provide some clues. They are partly composed of alluvial fan gravels, but mostly they are fine-grained lake sediments. And they used to be saturated with groundwater. The darker rocks along the rim are composed of bits and pieces of basalt and volcanic ash. The volcanic rocks mantle several square miles around the craters (below). 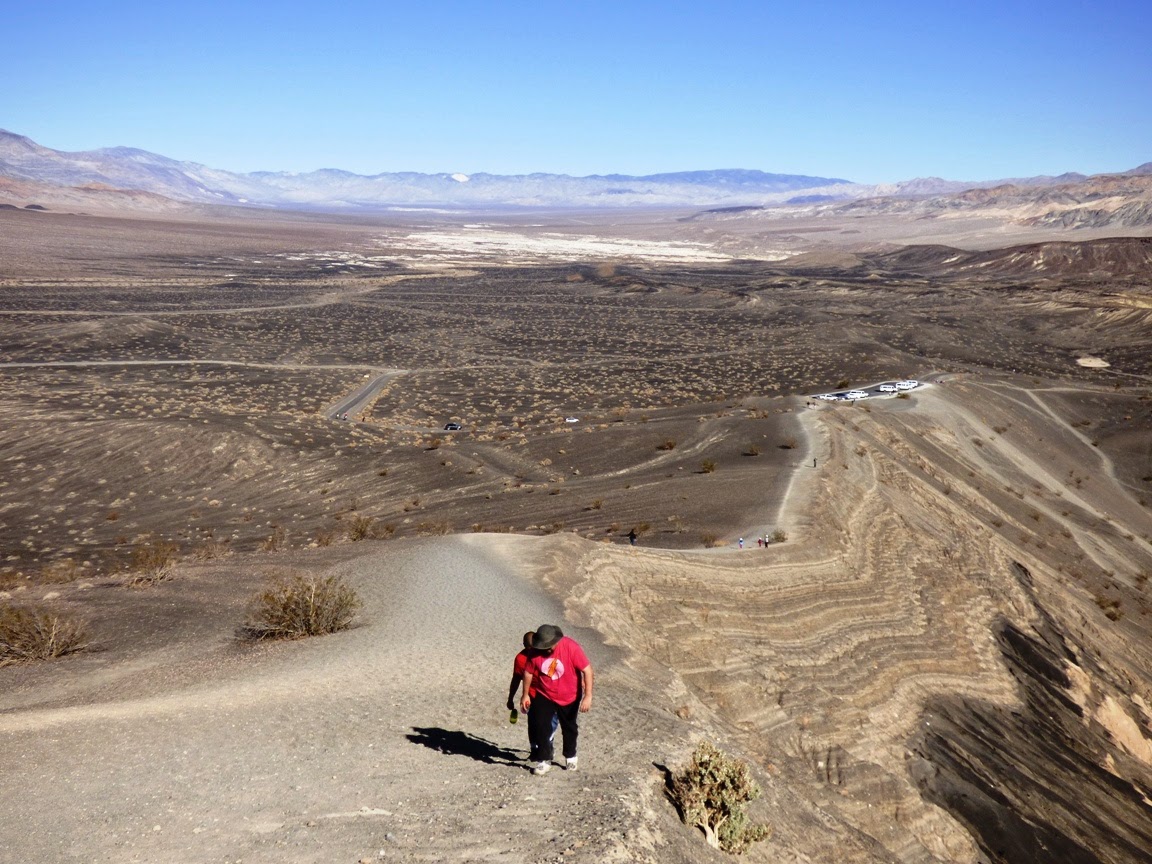 The best way to see the details of Ubehebe Crater is to walk the rim (and to walk down to the bottom, but that will be a story for a different time).  The gullies that have been carved into the sediments are shallow, indicating the recency of the events here. 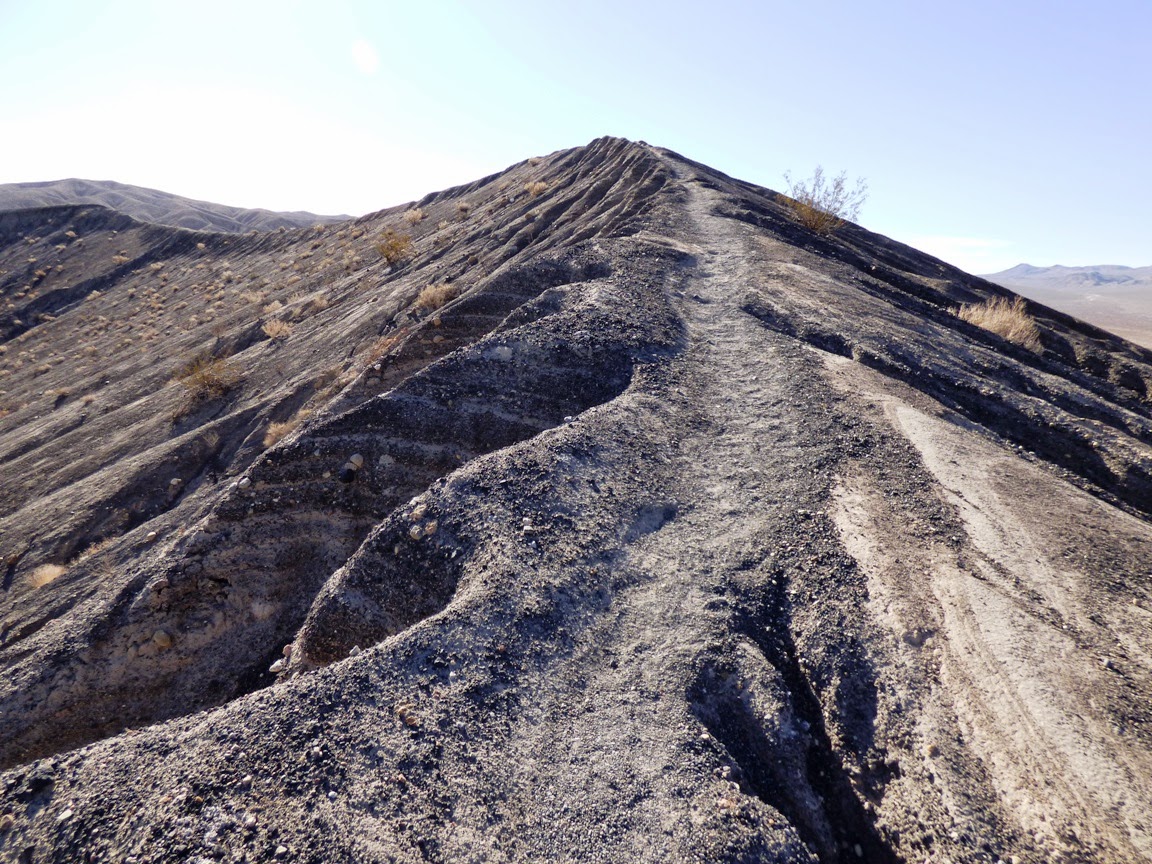 Still the trail is steep in a few spots. It's about one and a half miles of up and down pathways leading around the rim. From high points, one can see the overlapping cones and the layers of basaltic material. 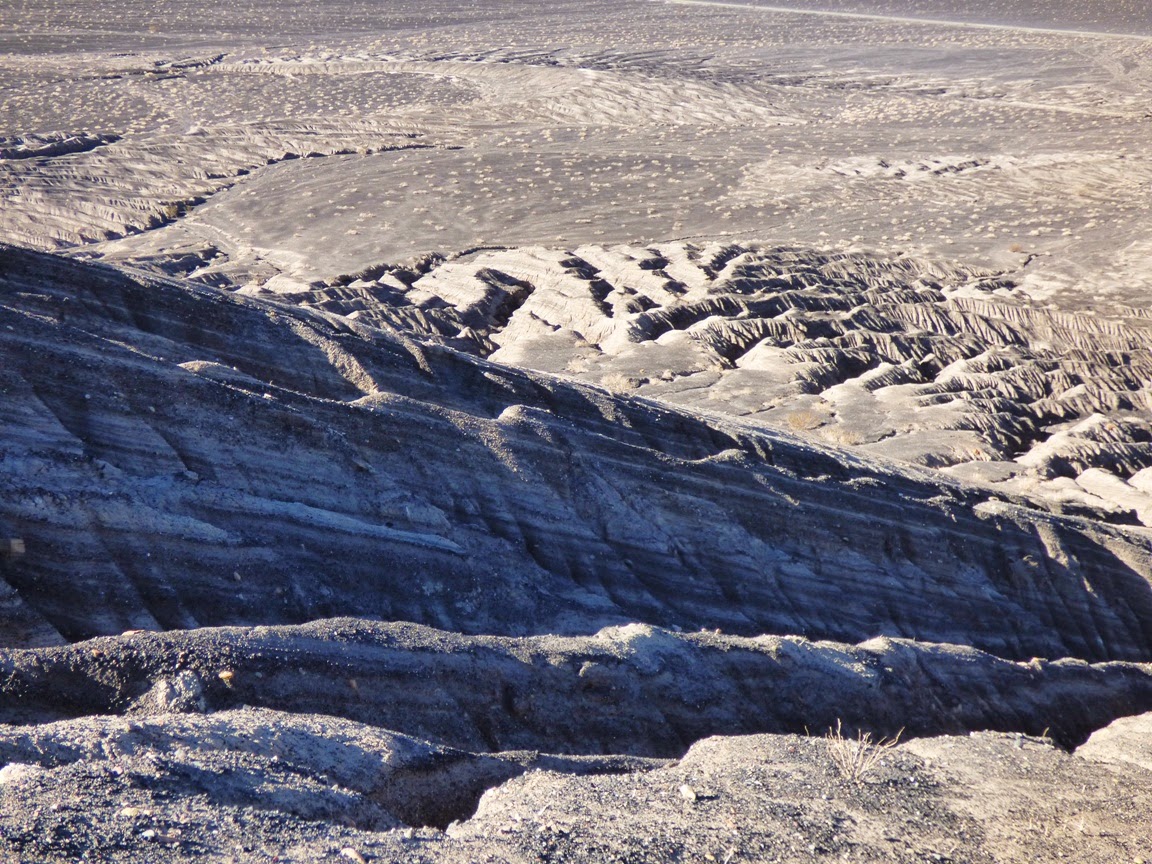 From the highest part of the rim, one can see the strong contrast between the orange and yellow sediments in the wall of Ubehebe. They mark the location of a fault line related to the Cottonwood Mountains just to the south. 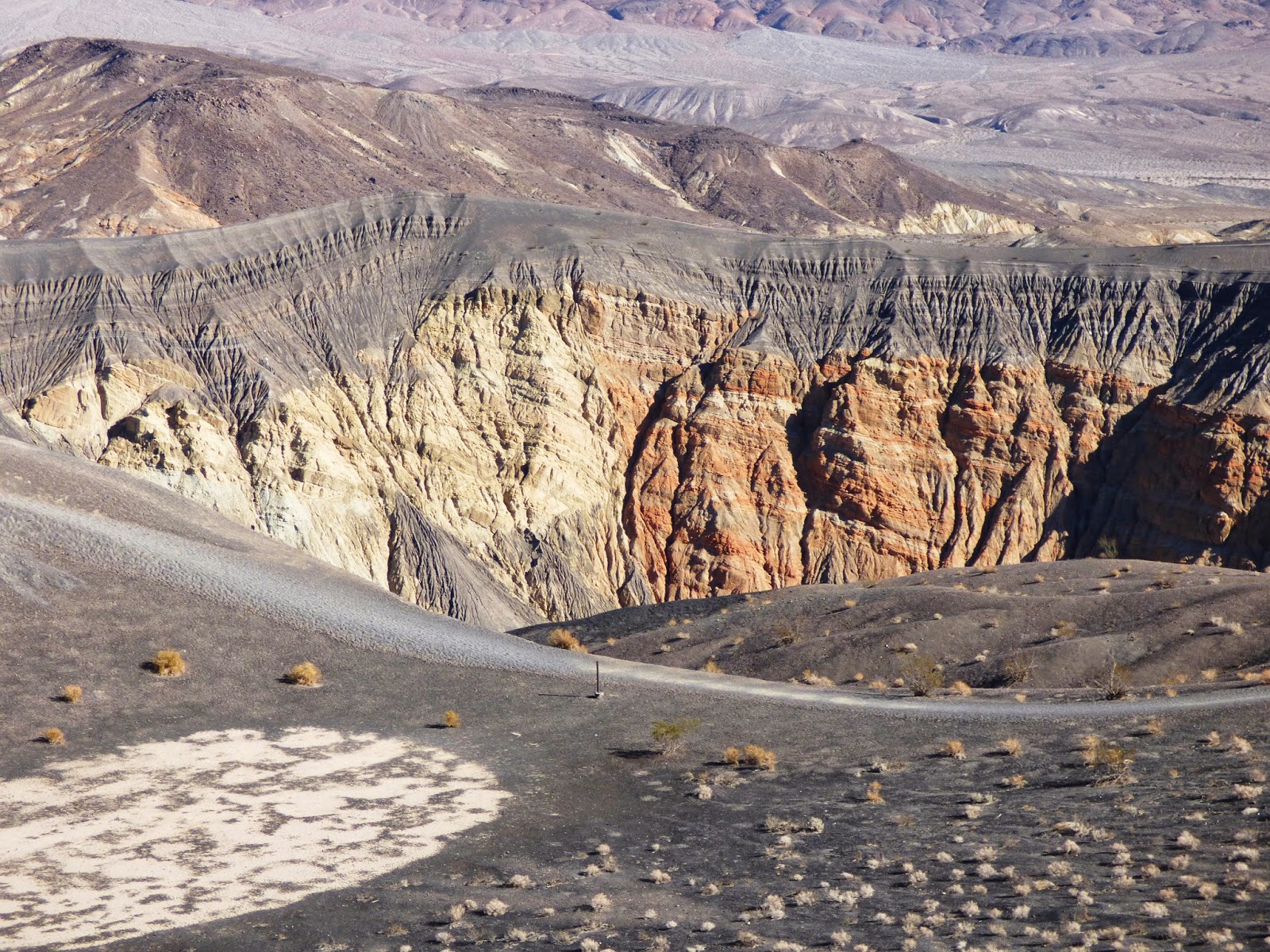 It's quite a view from the top! 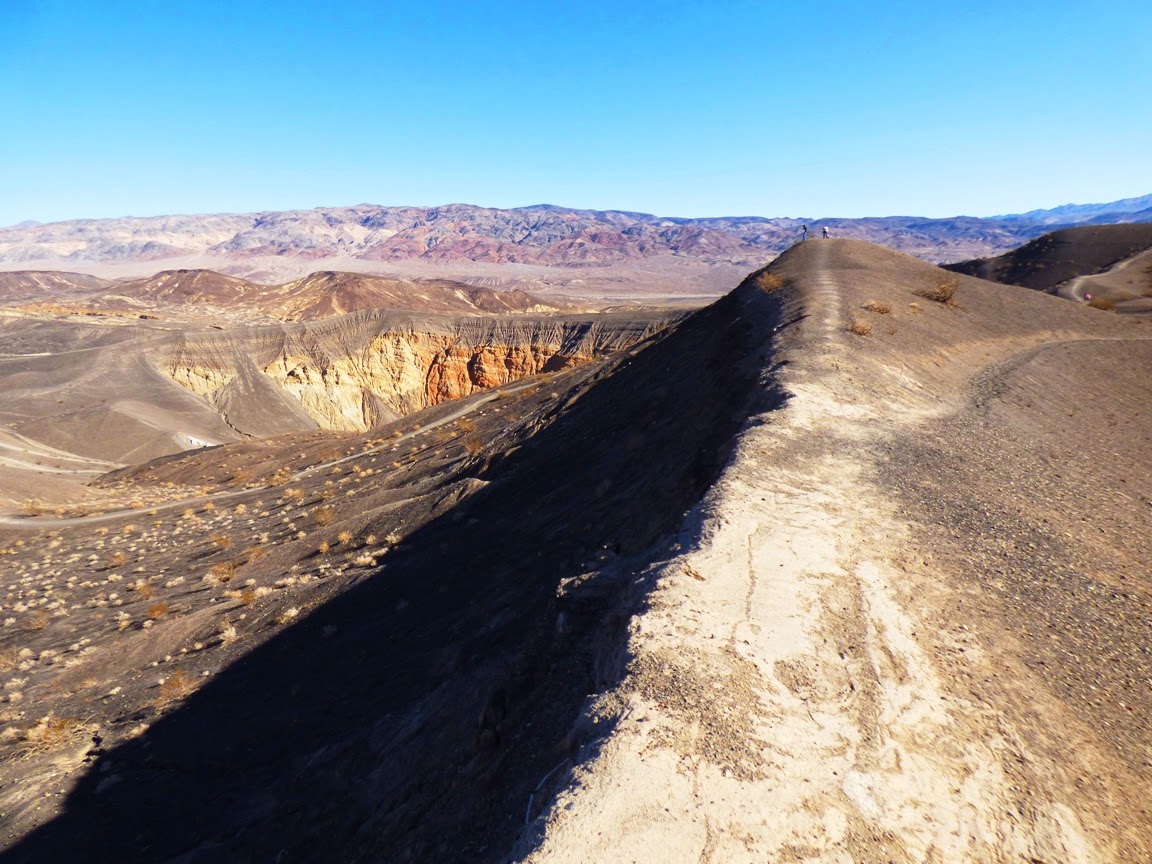 The only actual lava at the complex can be seen inside the crater of Little Hebe, in the picture below. Little Hebe is the remains of spatter cone that was later blown apart by the kind of explosions that formed the rest of the craters in the vicinity. 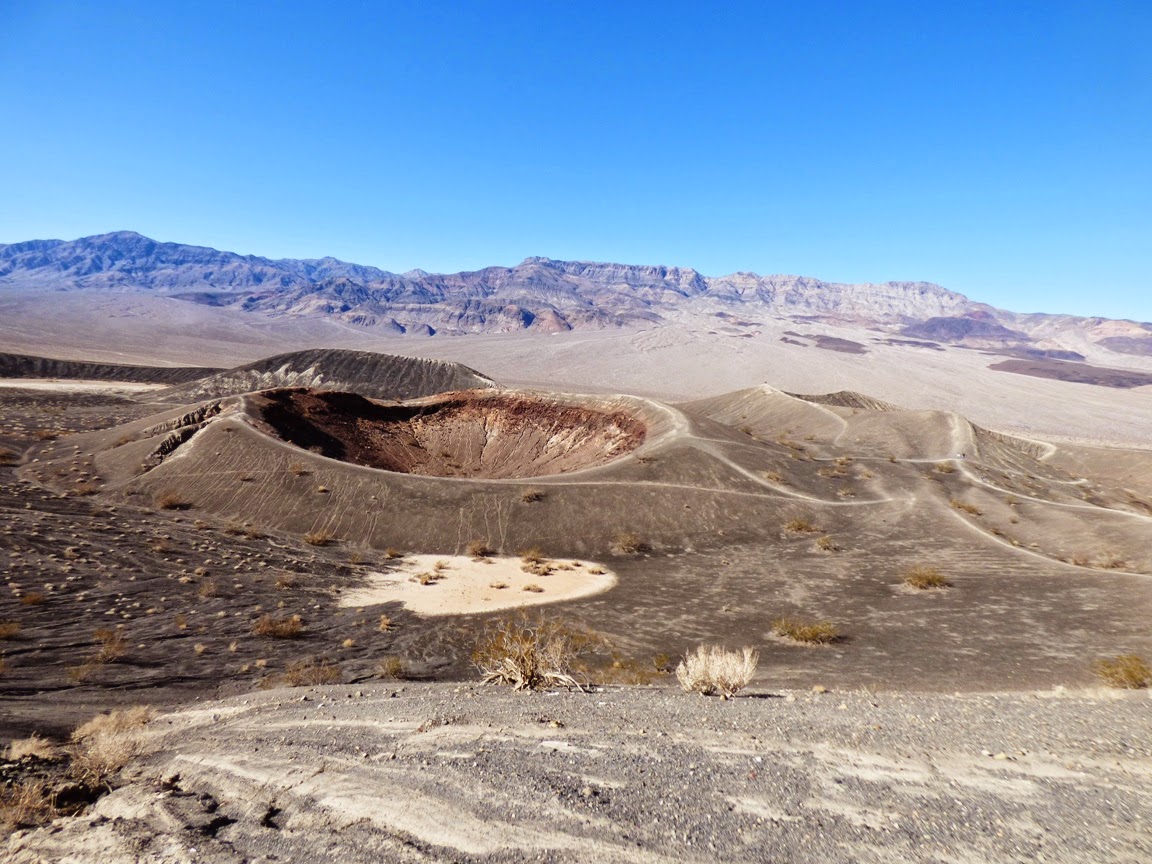 So here at Ubehebe are the ingredients for an explosive event. Saturated lake sediments, a fault line providing a conduit for magma to approach the surface, and the tendency of water under pressure to explode when it gets too hot. The Ubehebe Craters are world-class examples of maars, the craters that result from groundwater (phreatic water) flashing to steam in an explosive manner. 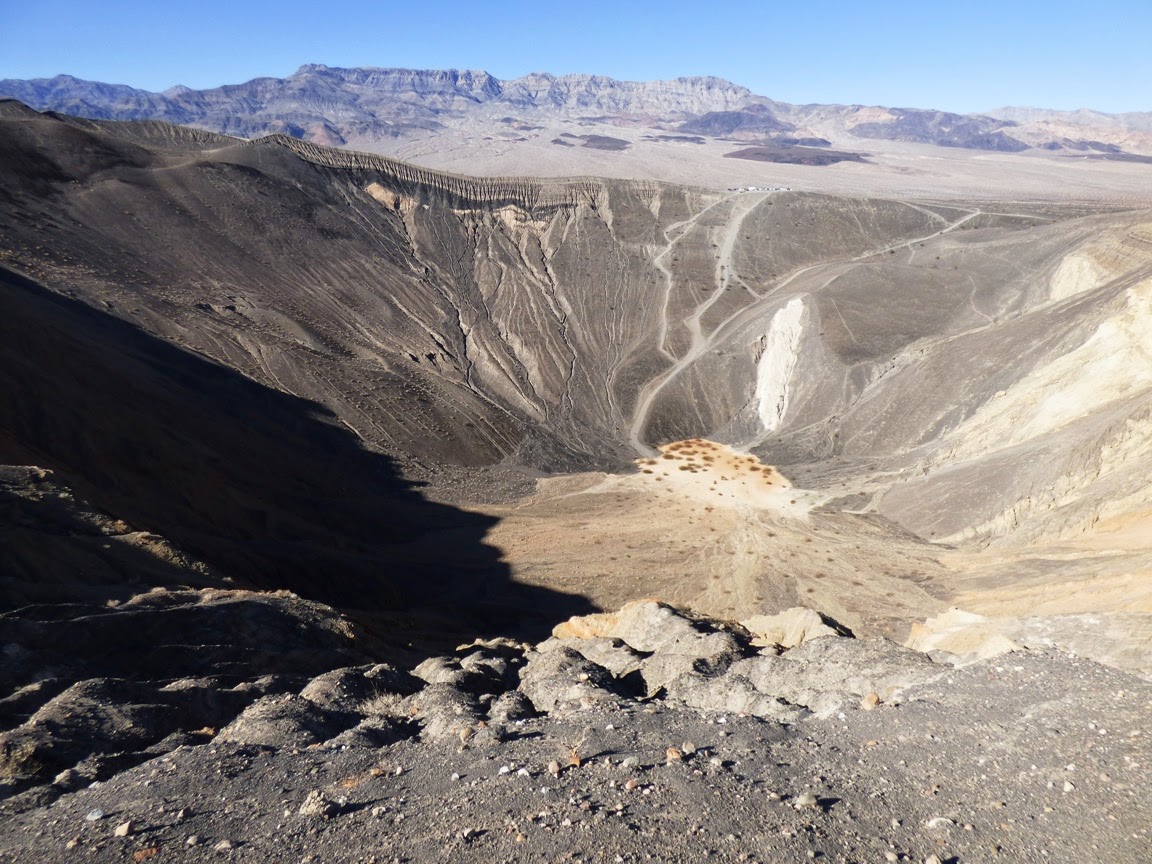 It must have been awe-inspiring to witness the explosions, and considering that human artifacts have been discovered underneath some of the ash deposits, there is a very good chance that people saw the event take place. Precise dating of the explosions has proven challenging, but few researchers think that the eruptions were more than 6,000 years ago, and some recent findings provide hints that the eruptions could have been only a few centuries ago...and the conditions responsible for the eruption are still present. What a spectacle it would be if it happens again! 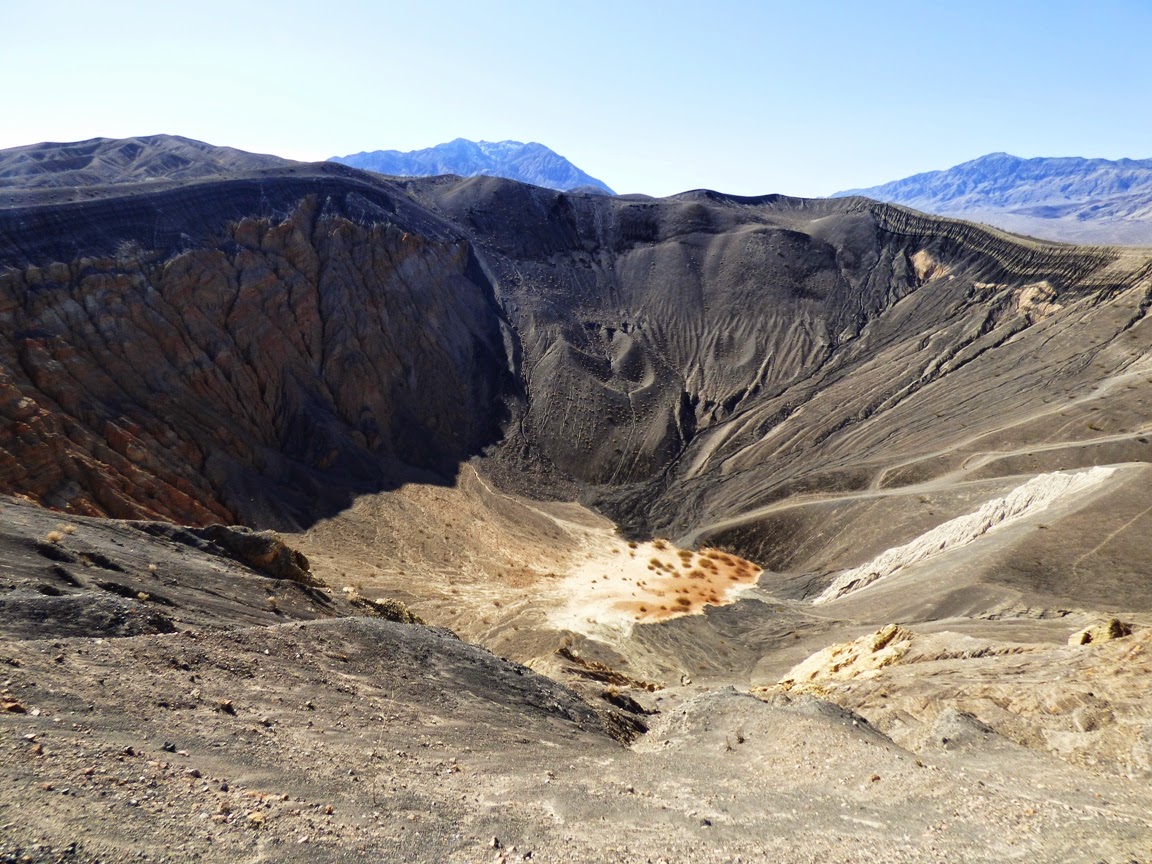 There was one thing extraordinary about our visit last February...the air was calm! The narrow constriction at the head of the northern stretch of Death Valley causes winds to be funneled across the rim of the craters, and it's usually...um..."breezy" up there. As in barely able to stand up straight. But this day was one of the most pleasant I have ever experienced.

The display at the parking lot at Ubehebe provides a nice overview of the overlapping craters. It is easy to combine a tour of Scotty's Castle (interesting but not very geological) and Ubehebe Craters. They are only a few miles apart. Ubehebe is also the starting point for the rough road leading to Racetrack Playa and the sliding stones. Another rough road heads north across Eureka Valley to Big Pine in Owens Valley. It is another road that I intend to explore one of these days!

We got in the vans and headed south with the intention of walking into an upside-down mountain. But that will in the next post!
Posted by Garry Hayes at 10:35 PM

Garry. A great blog which I have only just encountered. A good explanation of a fascinating place I visited on a trip to Death Valley in 2010. Which has inspired me to make another trip to your wonderful country.
Pete Loader Chair Earth Science Teachers' Association.

Your photos are so evocative, Garry. Thanks so much for your wonderfully educational blogs and photos. Amazing world we live in.