Adventures Along California's San Andreas Fault: The Devil's Punchbowl (but no earthquakes today) 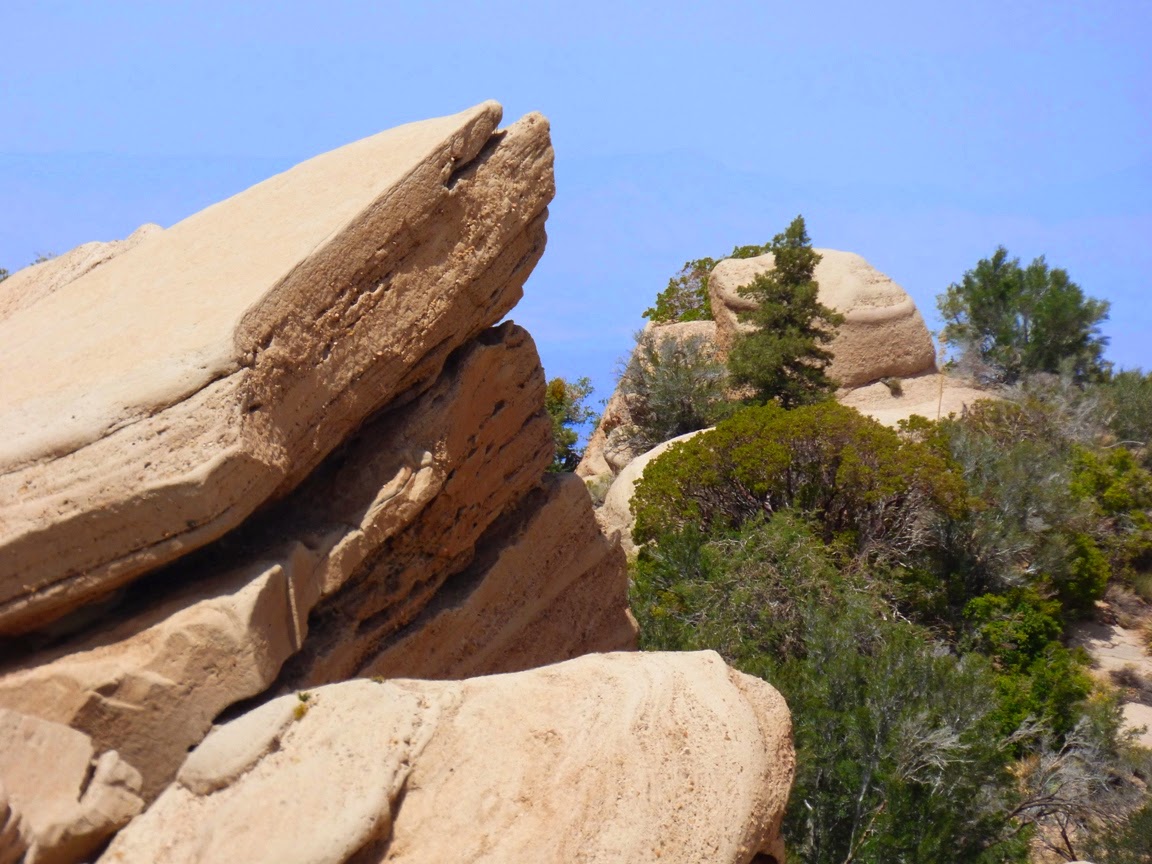 The Devil gets blamed for a lot of stuff, and who am I to say he isn't responsible for bad things? But one can hardly blame us for blaming him for massive earthquakes when he goes around leaving things next to major fault systems, like punchbowls.

Southern California is a tortured landscape, and it isn't just the pop culture. The entire region has been twisted more than 90 degrees from its original orientation, forming one of the very few east-west trending mountains ranges in North America. The rotation is a consequence of the crust being caught between the Pacific and North American plates along the San Andreas and related fault systems. The end result of the rotation and stepwise motion of the fault is massive compressional forces that have lifted the San Gabriel and San Bernardino mountains to great heights in a very short period of geologic time, just a few million years.
Our journey home this last weekend followed the path of the San Andreas fault as it passed along the north side of the rugged San Gabriel Mountains. These mountains are statistically one of the steepest mountain ranges on the planet, and the huge number of ancient and modern landslides in and around the mountains attests to their instability. The deformation of the crust is most intense in the immediate vicinity of the fault zone, so we encountered a mess of rocks when we arrived at Devils Punchbowl County Park outside the town of Pearblossom. 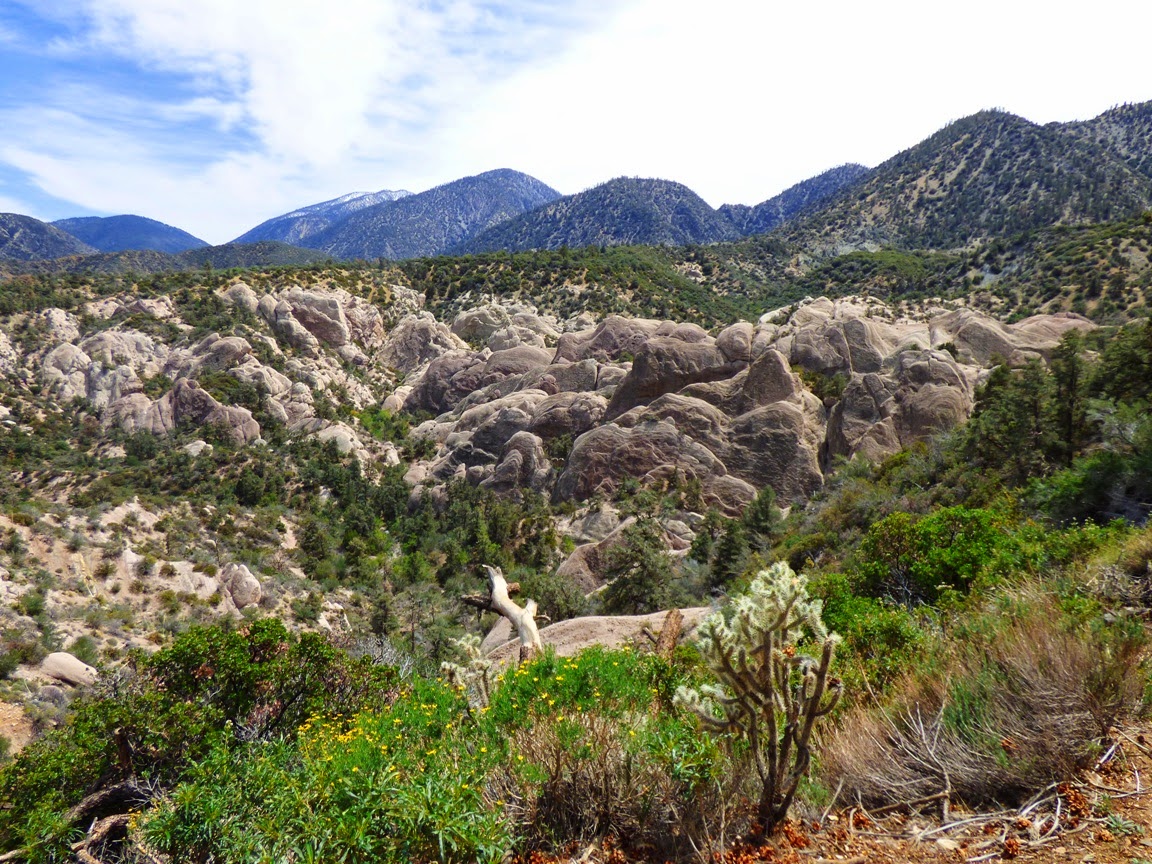 Devils Punchbowl is administered by the county of Los Angeles, and has a nice little visitor center with a couple of interesting trails that wind among the steeply dipping rock layers. The rocks exposed in the park are called the Punchbowl formation, and they were deposited in alluvial fans in basins that formed about 13 million years ago in the vicinity of the fault. They have since been twisted into a series of upward (anticlines) and downward pointing folds (synclines).

The axis of the most obvious fold in the main part of the park, a syncline, plunges into the ground to the west directly towards the park headquarters.

If it is hard to pick out, take a look at the annotated picture below. In a syncline, the layers slope, or dip, towards the center (the axis) of the fold. The axis slopes towards the observer, i.e. water would tend to flow downwards along the axis of the fold. 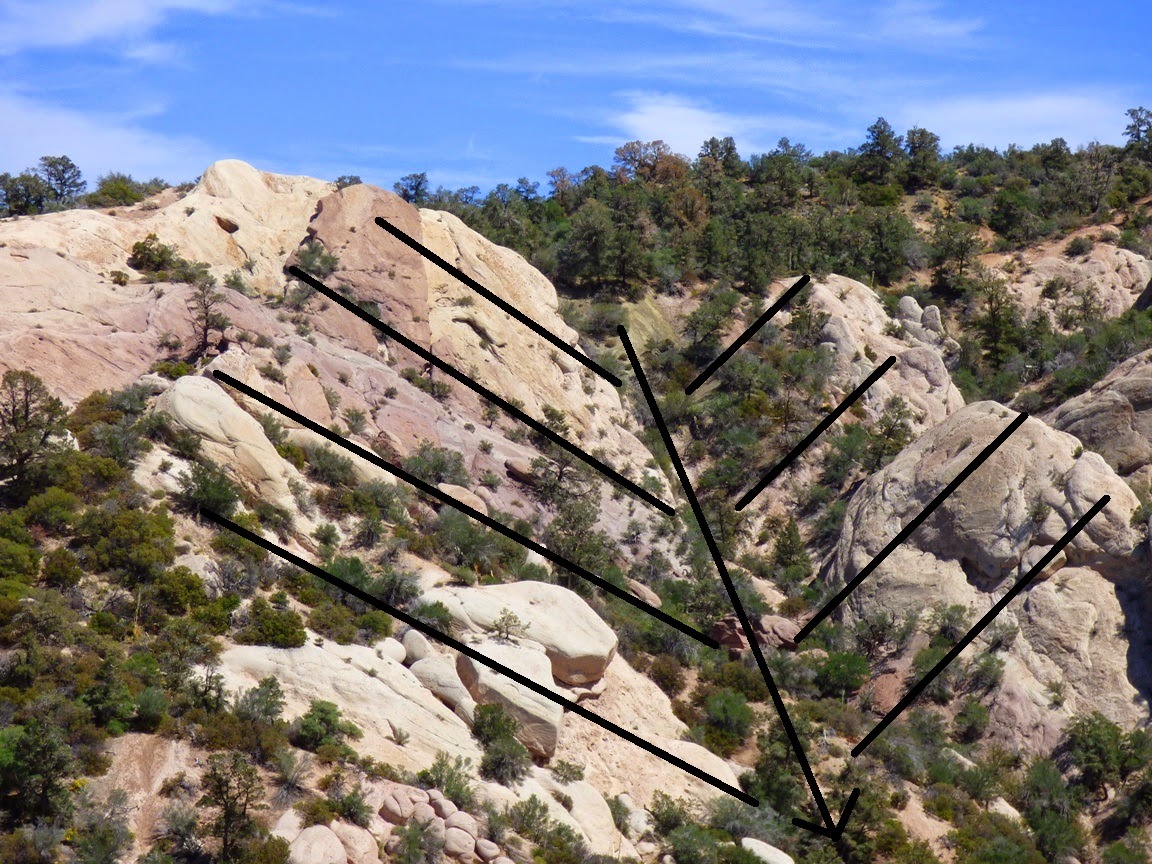 A popular one-mile long loop trail winds through the center of the punchbowl, offering some nice views of the conglomerate and arkosic sandstones that make up the cliffs. I had a few moments to spare, so I walked quickly down the trail to have a look around (I moved considerably slower on the climb back up!). If these rocks look a little like a place where Captain Kirk should be fighting Gorns, you aren't too far off, although it's a different formation, a different fault, and a different location. The Vasquez Rocks are along Highway 14 on the other side of the San Gabriel Mountains, but the rocks there also formed in alluvial fans, and were tilted by fault motions. The trail started to climb steeply, and I realized that all my walking exercises over the last five months have done wonders for my leg muscles, but somewhat less for my aerobic capacity. I've got to spend more time on stairs! As an old favorite folk song says, I'd rather be huffing than not huff at all. 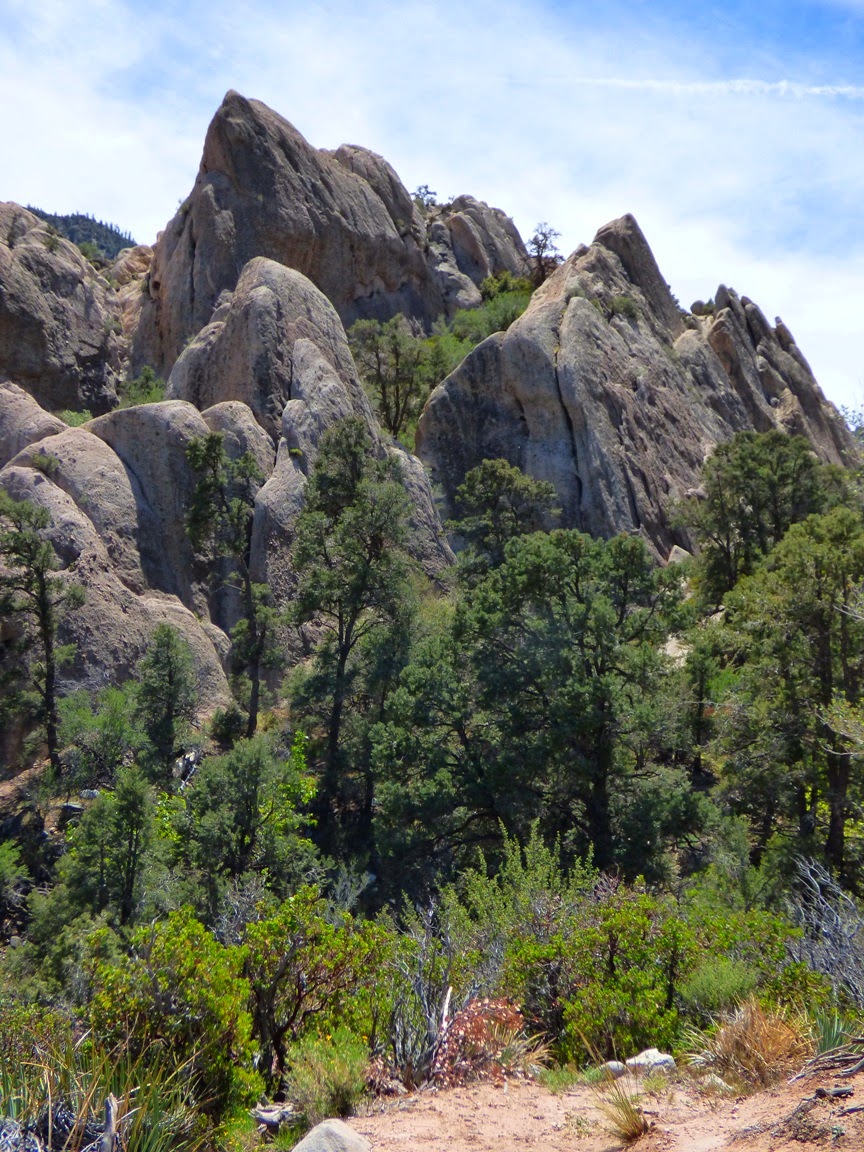 The Devils Punchbowl is a fascinating place to visit. You access the park from a turnoff at the east end of the village of Pearblossom on Highway 138 between Palmdale and Cajon Pass. There are picnic facilities, but no camping. The kids will love Squints the owl and the other animals in the visitor center. 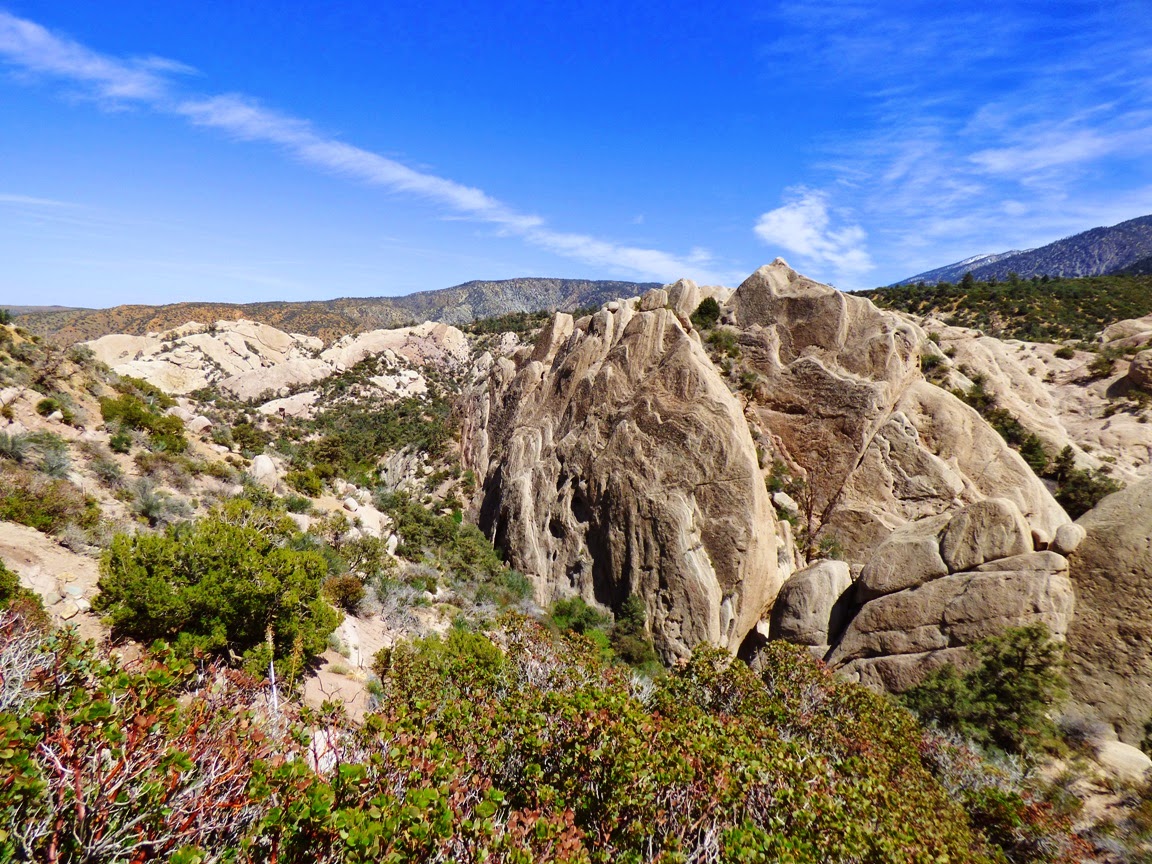 Geologists sometimes seem to court disaster, in the sense that someone like me will stand on a major fault zone and think to himself that it would be cool to see the "Big One" happen just then.  Such an event is going to be a horrible tragedy, and I would never wish it on anyone, but we live here in California, and the quakes do happen. It's just that there is an intellectual curiosity about what it looks like when a fault ruptures and shifts 15 or 20 feet. It would indeed be a sight to see. 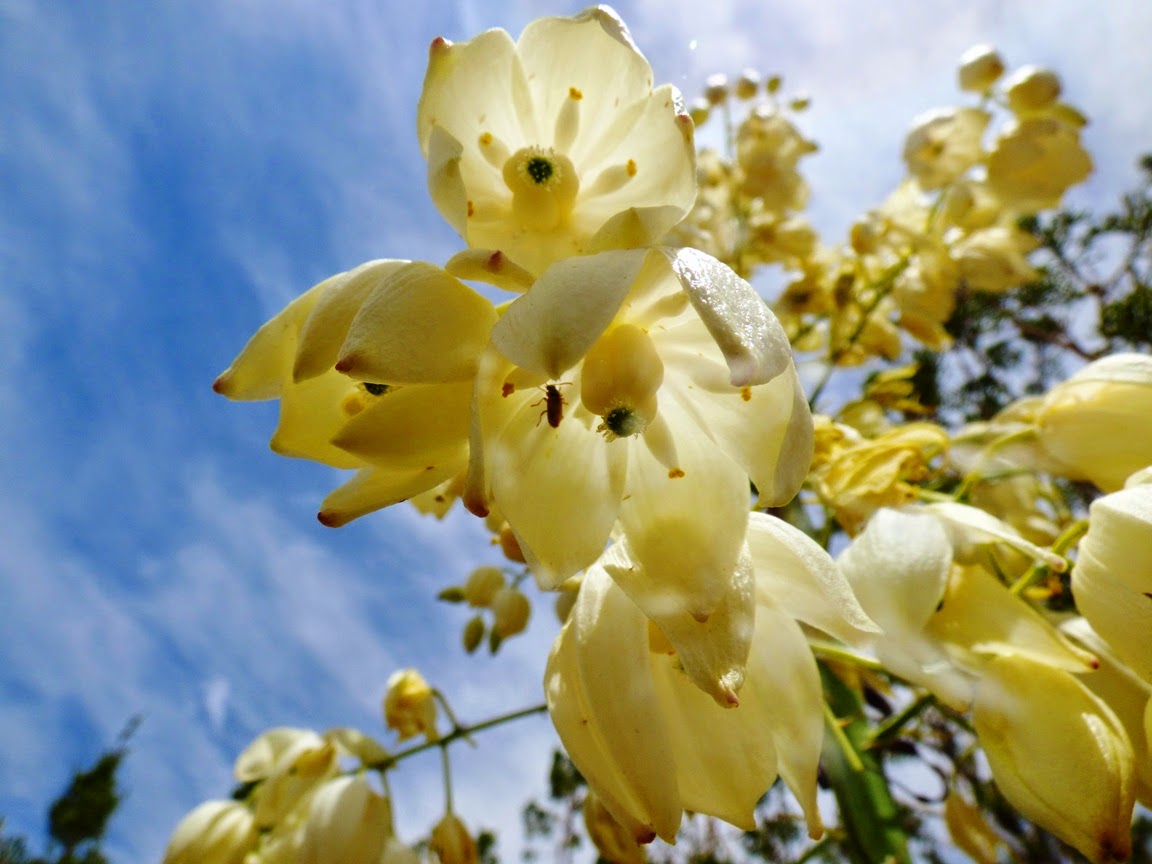 So we hung around near the fault trace just to see what would happen. Nothing did, of course, or everyone would have heard of it. The big earthquakes have a recurrence interval of around 100-150 years, and with the last major event in 1857, there is plenty of stress built up, but there was no compelling reason to think that it would happen while we were there. No, we just heard the light breezes, the buzz of busy insects, and watched the sun shining on myriads of wildflowers hiding among the shrubs. 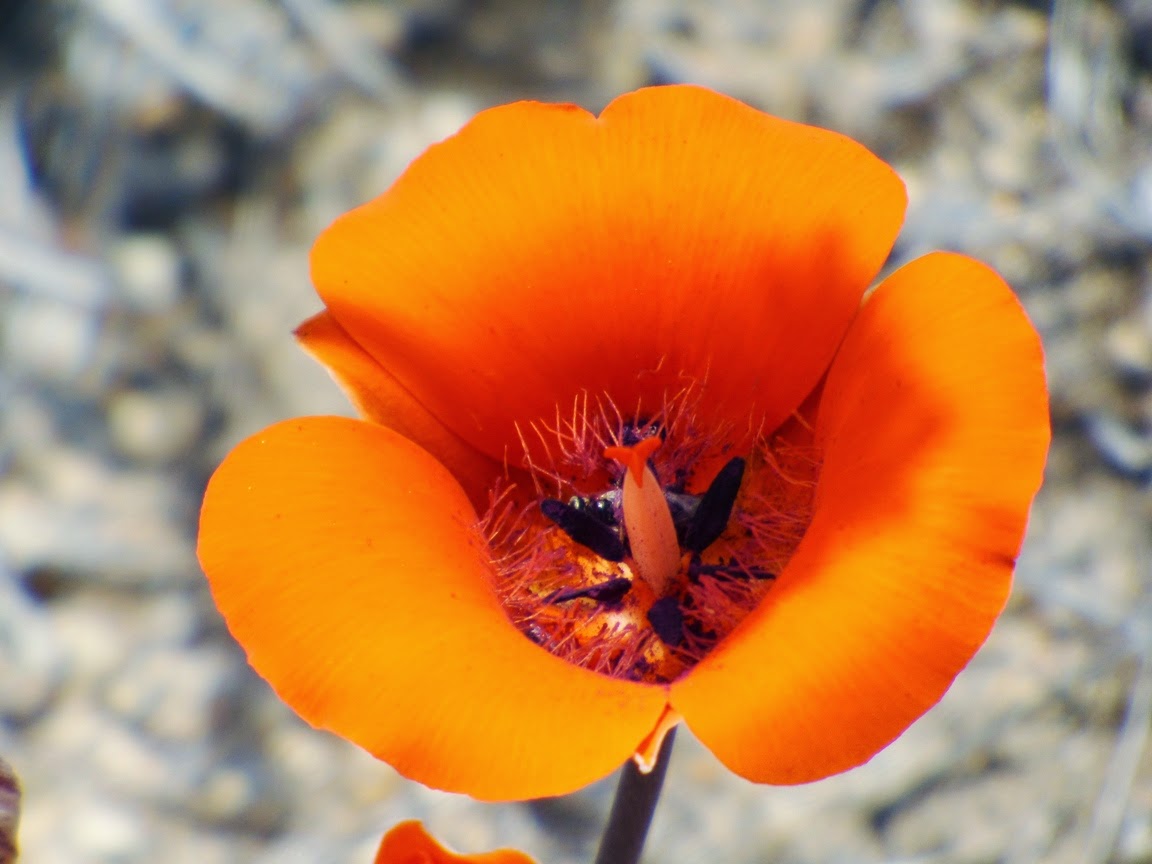 We stooped down and started photographing flowers, including this one, a variant of the Mariposa Lily that I was not familiar with. It's stunningly beautiful, but if you are a small bug, it can be deadly as well, as you can see in the photo below... 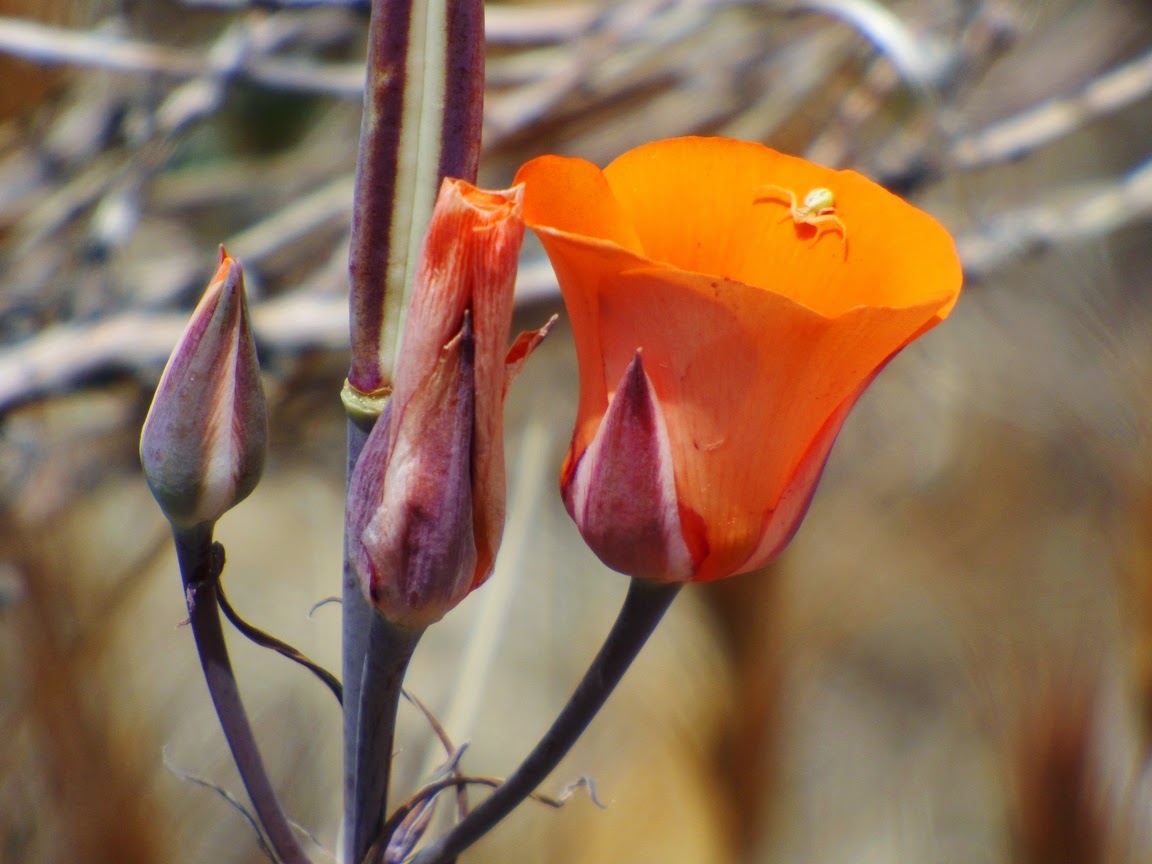 There were just a few Beavertail Cacti blooming in the area. 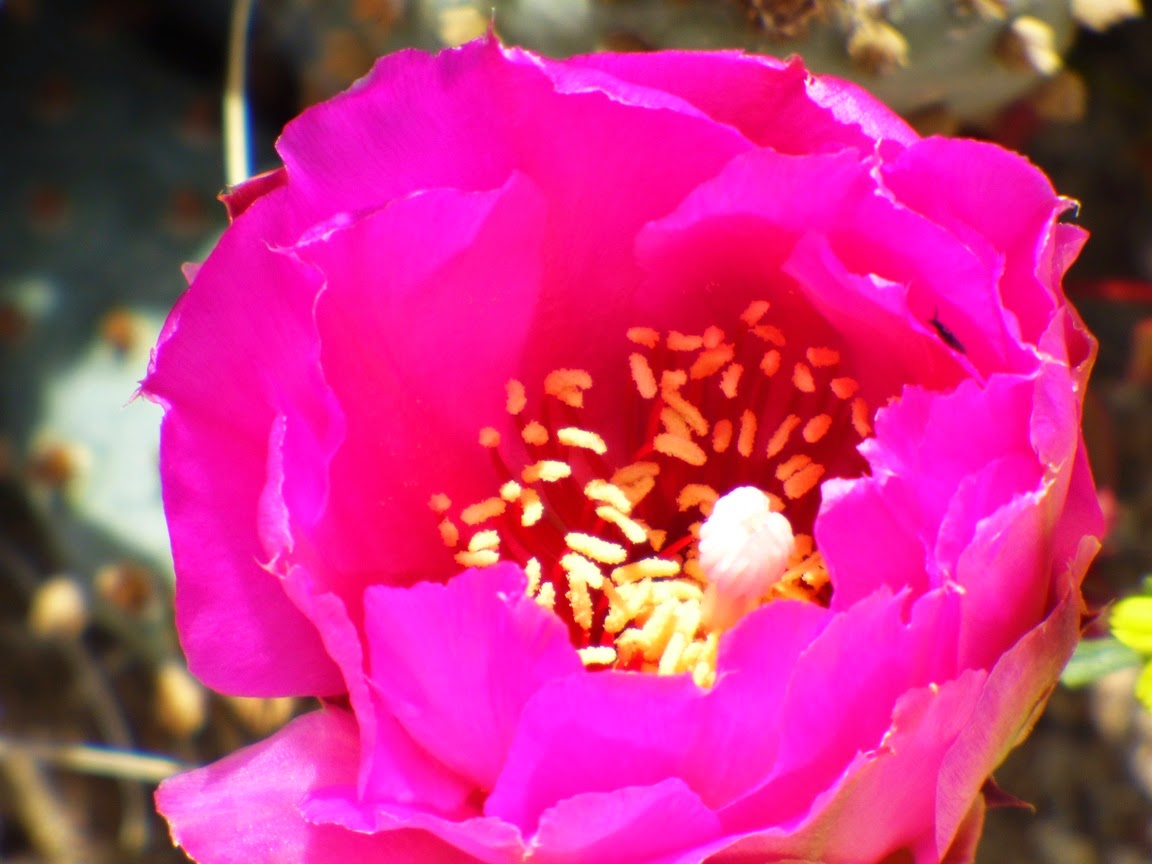 There were lots of Coreopsis growing in isolated patches. 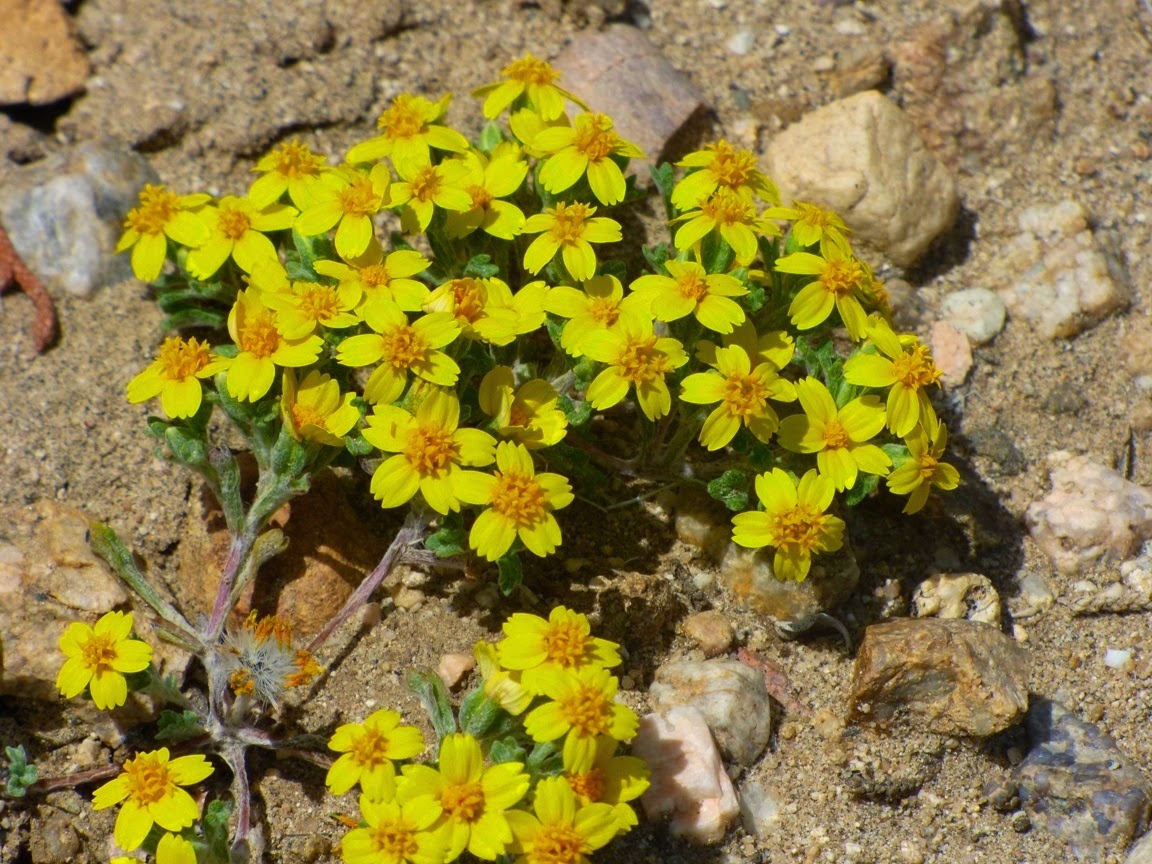 And there were lots of Desert Dandelions along the highways where they benefited from the little bit of extra runoff from the road surface. 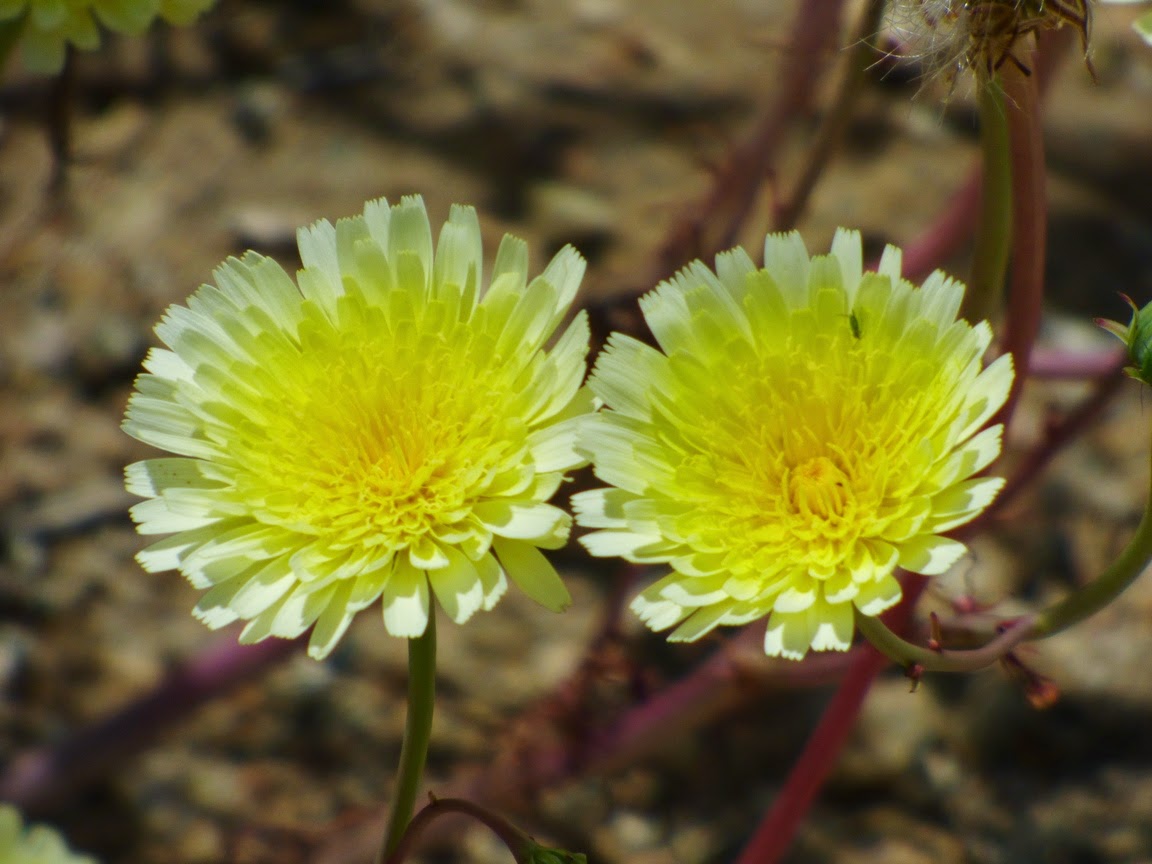 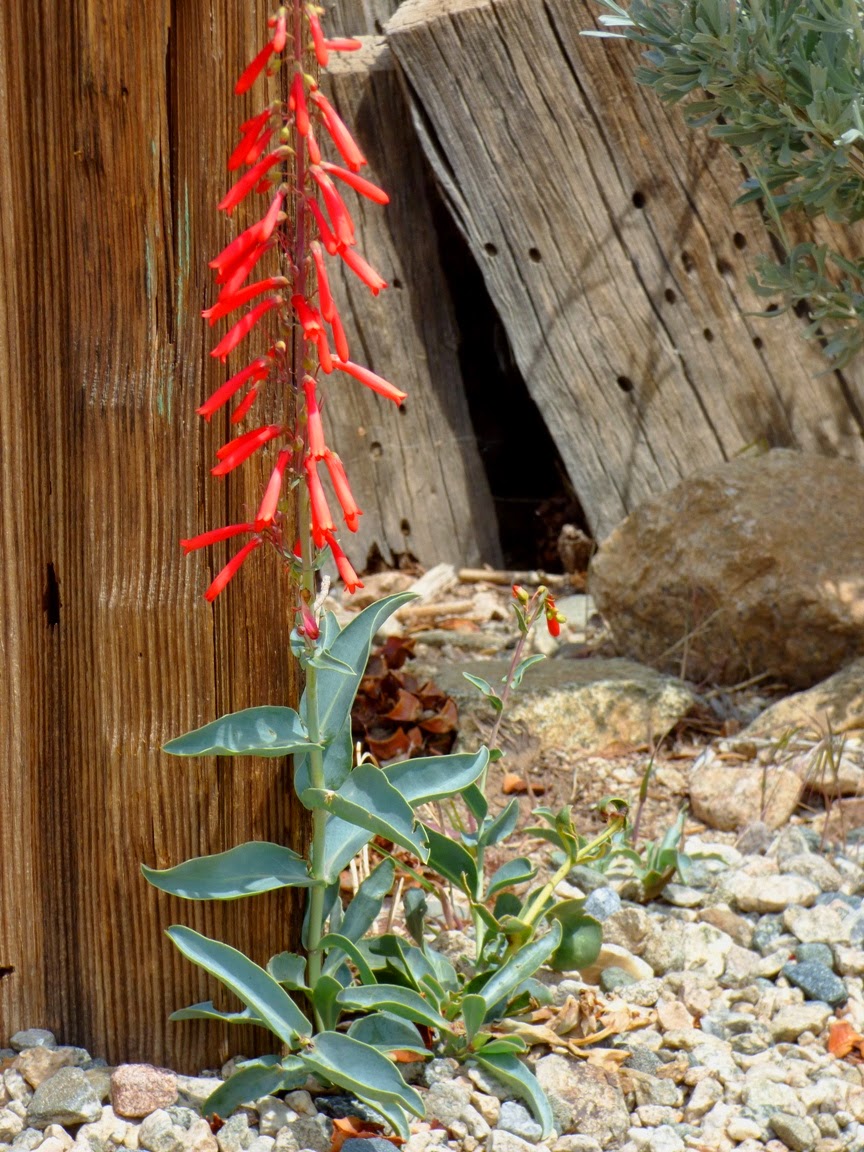 All in all, a beautiful day, courtesy of the Devil leaving his punchbowl lying around a major plate boundary. 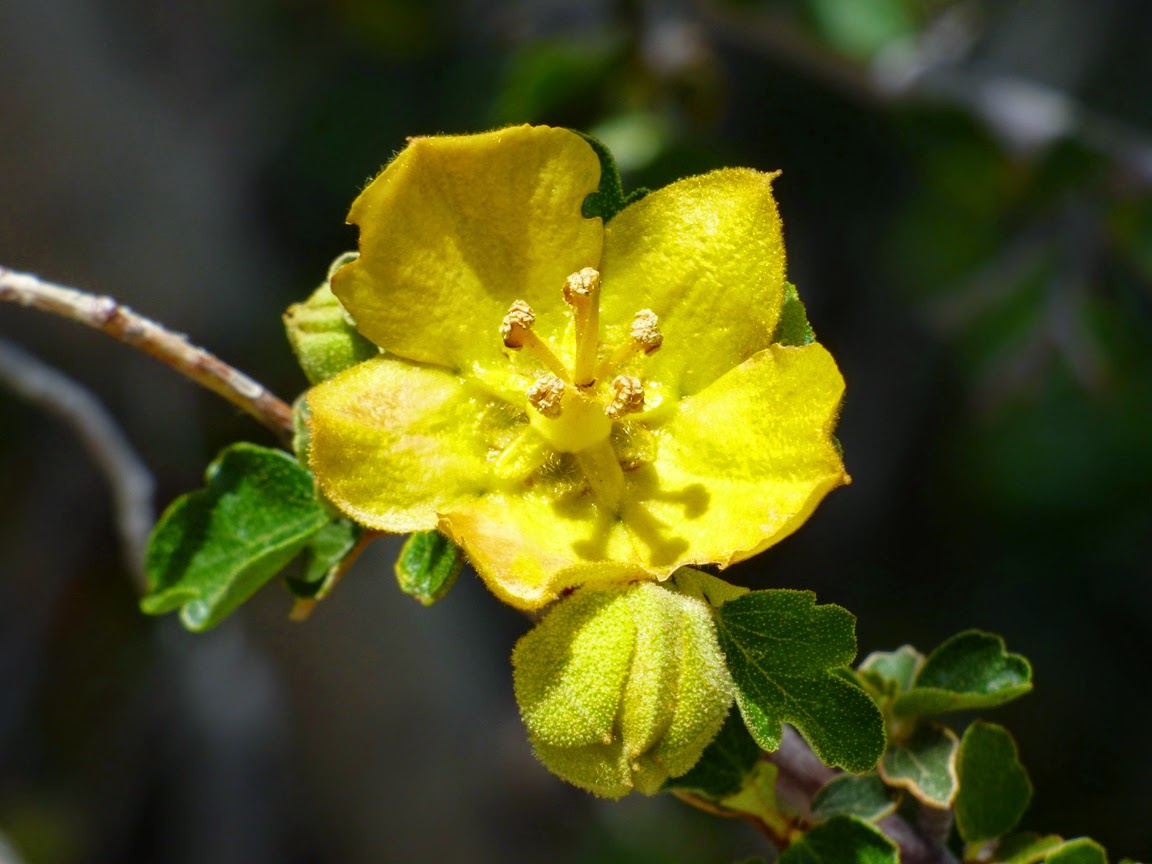 Great pictures! As a rock climber who frequents the punchbowl, I was happy to find some geological info on how the rocks play into the fault line. No major earth splitting in my experience either ;)

wow, I really should stop there next trip to the Golden State! Thanks for the info.

Beautiful Pictures. I have been thinking alot about the fault lines and earthquakes since the movie came out. I wanted to pass this on:

I hear ya on all this earth shaking. I was born in northern California. Moved to a safer place, away from earthquakes and tsunami's, only to find myself back living in central California near the beach. My grown children where still in the safer place but I still felt ill prepared…

Then I put together survival backpacks for my family. They were easy and more complete than those you can buy in stores or online. This task got me thinking??? Many families need these simple survival backpacks. I knew I could not start manufacturing them, but I did know that I could write about them. I put together a Survival Backpack Gear book. It short and to the point, with a Shopping List and Check List. Just wanted to pass this on.

I'm still totally concerned every day about the earthquakes in California, but I feel better that I have a Plan..