Where are the Ten Most Incredible Places You've Ever Stood? My Number 6: I stood in a place no one else can ever stand, at Pu'u O'o 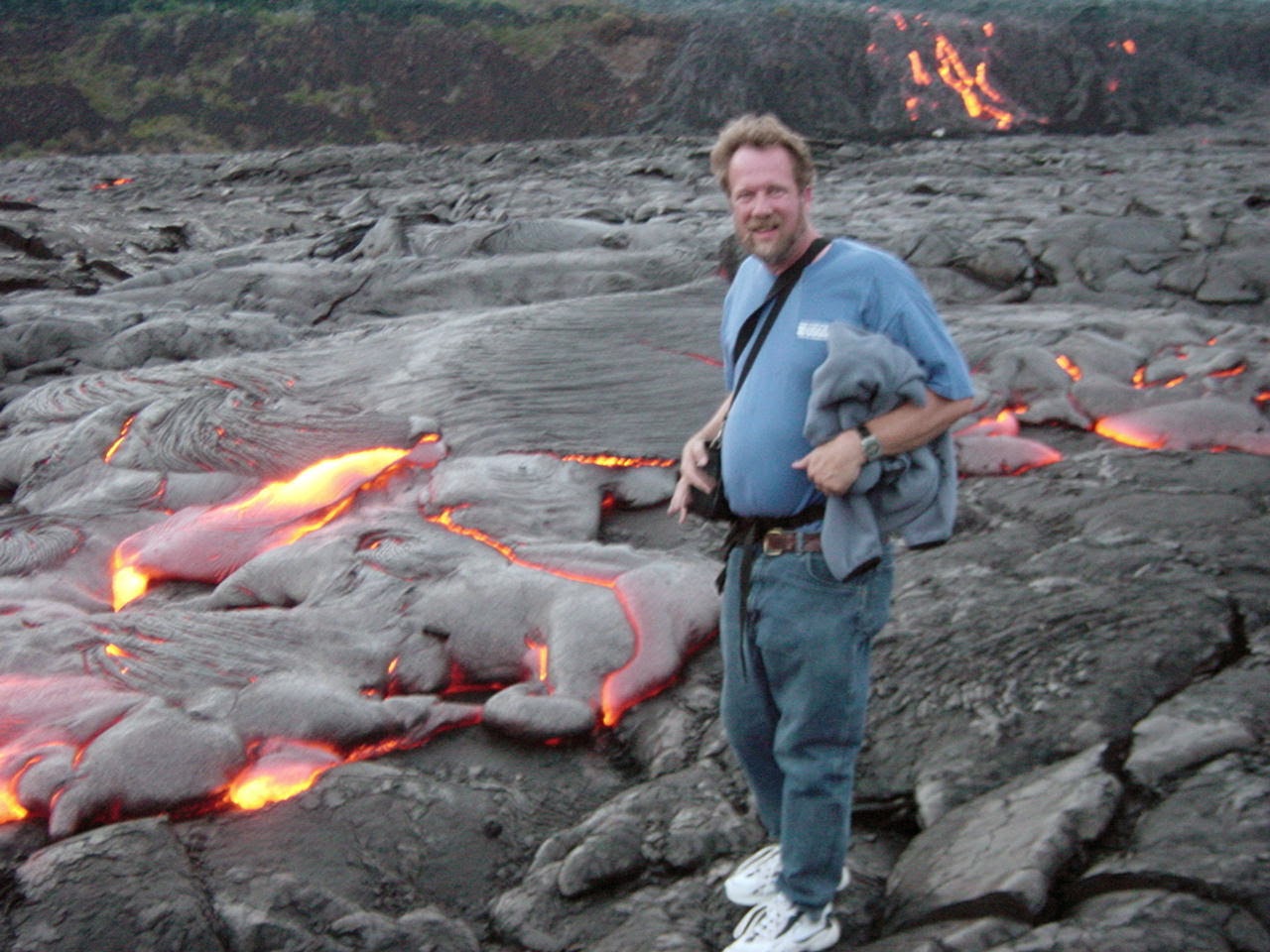 Yes, Hawai'i gets two spots on my top ten list of the most incredible places I've ever stood. A few days ago I talked about my wonderful adventure in the swamps of the Alaka'i Plateau on Kaua'i, but today we'll hear about the Big Island, and the rather incredible volcano there that has been erupting continuously now for thirty-one years, since 1983. The ongoing eruption of Kilauea and its satellite vent Pu'u O'o is the longest known period of activity in the history of the volcanoes of Hawai'i.

It was June of 2002 when I reached the Hawaiian Islands for the first time in my life. I had spent the first fifteen years of my academic career learning to teach and ignoring any kind of writing or research, but I finally decided to submit an abstract and give a presentation at a meeting of the American Association for the Advancement of Science on the Big Island. I anxiously watched the lava flow reports for months ahead of time, but little was happening with the volcano. It was essentially a time of simmering around the summit region of Pu'u O'o, and any chance of seeing active lava flows would require miles of hiking over practically impenetrable forest and rock exposures.

Then, in an incredible moment of good timing, the May 12th Mother's Day Flow began, and a huge river of lava began to make its way down the south flank of Kilauea. In a matter of weeks it was approaching the final pali (gigantic fault scarp/cliff) before reaching the coastal plain. On the day my flight landed in Hawai'i, the U.S. Geological Survey posted the picture you can see below (in case you have trouble with the perspective, the cliff in the photo is several hundred feet high. I was beside myself with anticipation. The lava was only a mile away from the end of the highway!
The timing was unique for several reasons. Because the flow was advancing towards the sea and making a new path, it had not yet formed a system of lava tubes which often hide the flow from sight. And as unintuitive as it sounds, the lava was not as hazardous as one might think. The advancing flow was so slow that the National Park Service was comfortable with park visitors walking right up to the edge of the lava. 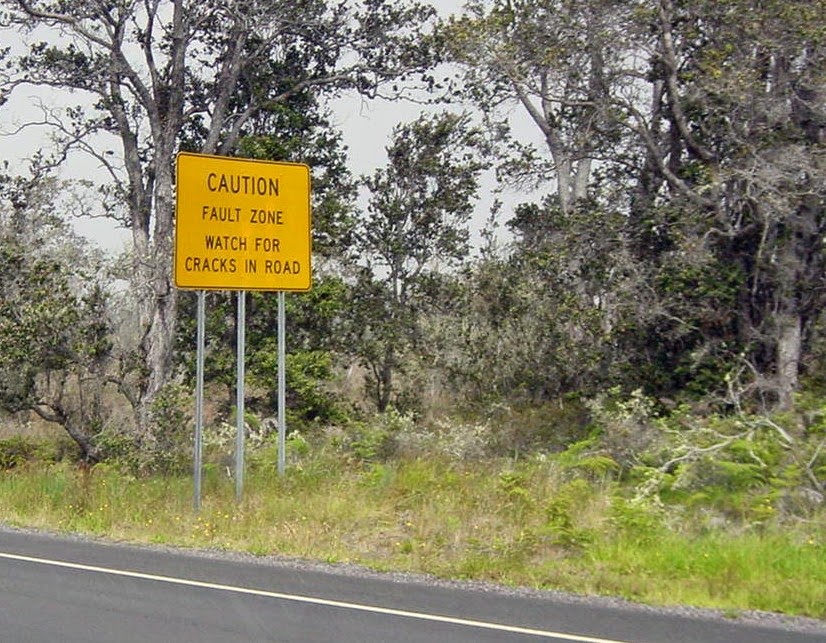 Still, one has to be careful. One never knows when a fault might suddenly appear on a park highway (note the sign above). And strangely, in the way that all signs have a story, this was a place where a lava flow once burst out right onto the highway, in front of a very surprised vulcanologist!

I was in for a crushing disappointment, though. The advancing lava flow had started the biggest forest fire in Hawaii's history. The road providing access to the lava flow was closed for firefighting operations. I was devastated to say the least. Here I was, on the island for the first time in my life, the lava was easily accessible, and I wasn't going to get to see it... 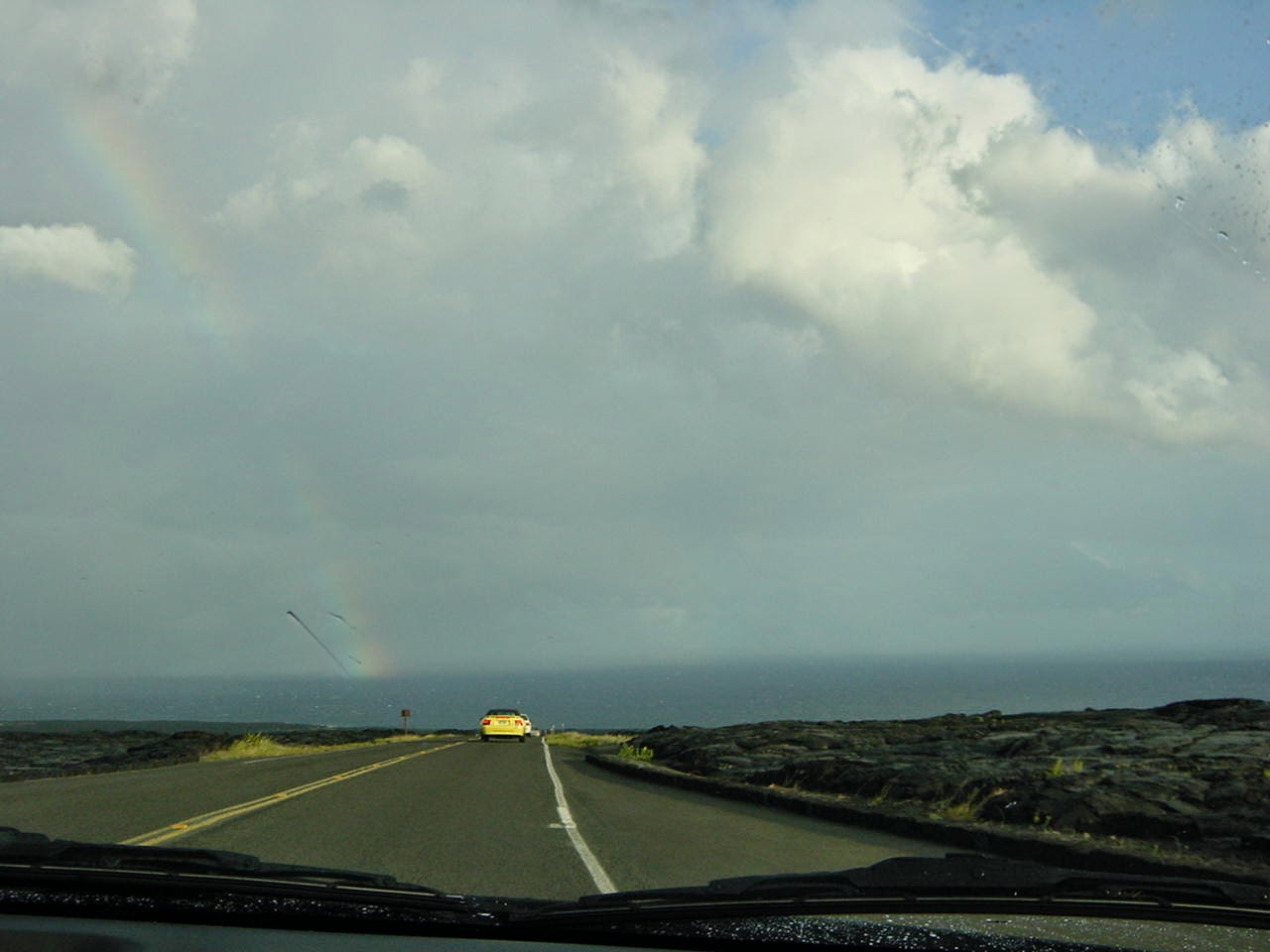 I didn't know about Hawaiian attitudes towards fighting forest fires, though. Here in California fires are a serious business with an "all hands on deck" approach that has firefighters working night and day until the fire is out. Since this fire was not threatening homes or structures, the firefighting teams knocked off at five o'clock and went home for a beer or something. They opened the road! We joined the long traffic jam in a headlong rush down Chain of Craters Road to the beginning of the "trail" to the lava flow. I was wondering what kind of parking lot they had down there on the old lava flows. I soon found out. There wasn't one. 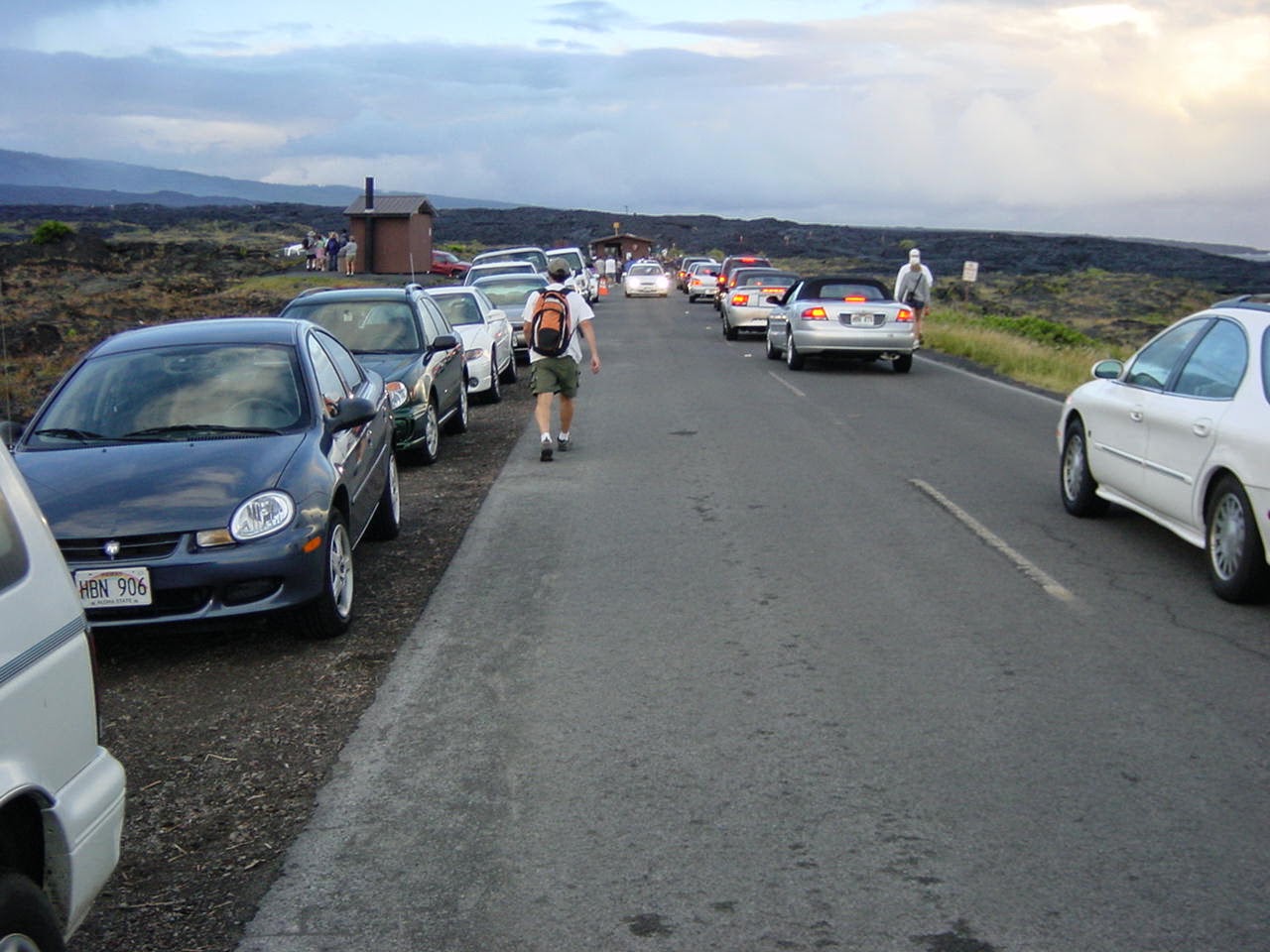 What happened instead is that one drove to the end of the road, did a U-turn, and then drove back up the road until a space appeared to park in. As we drove back up the road, my hike went from one mile, to two, to three. At least those extra miles weren't on rugged lava flows. I got out and quickly started down the road, filled with a sense of anticipation that I suspect only a fellow geologist can understand. 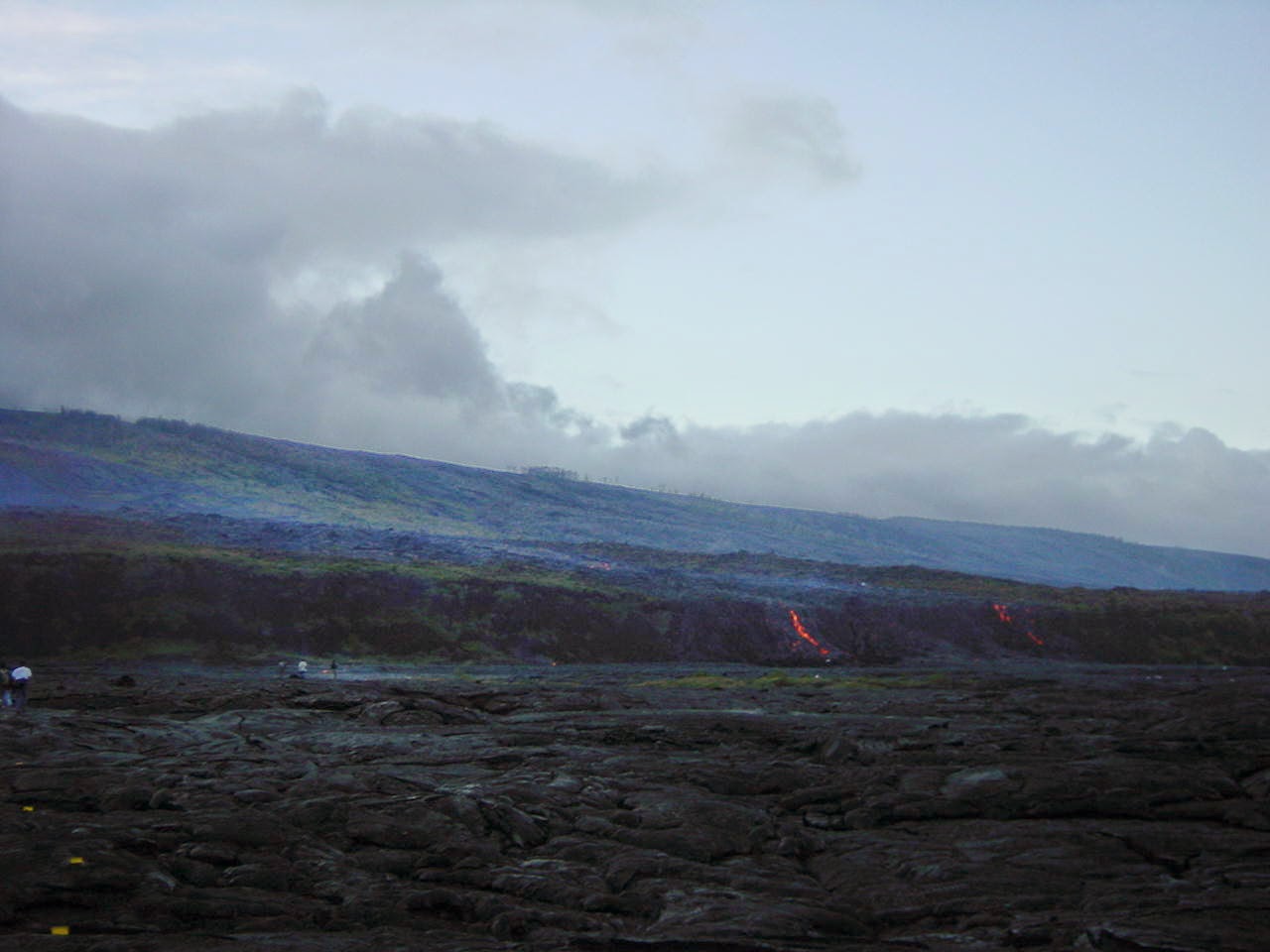 The "trail" was a set of yellow markers glued to the surface of the lava flow. It was something of a relief that the flows were of the smooth pahoehoe lava instead of the very rugged a'a type. I made good time running (yes, running; don't tell my wife about this) towards the lava flows. I was quickly becoming aware of the reason Hawaiian lava flows are best seen in dusk or at night. The incandescent rock is easily obscured in bright sunlight. At night, it turns into a light show. 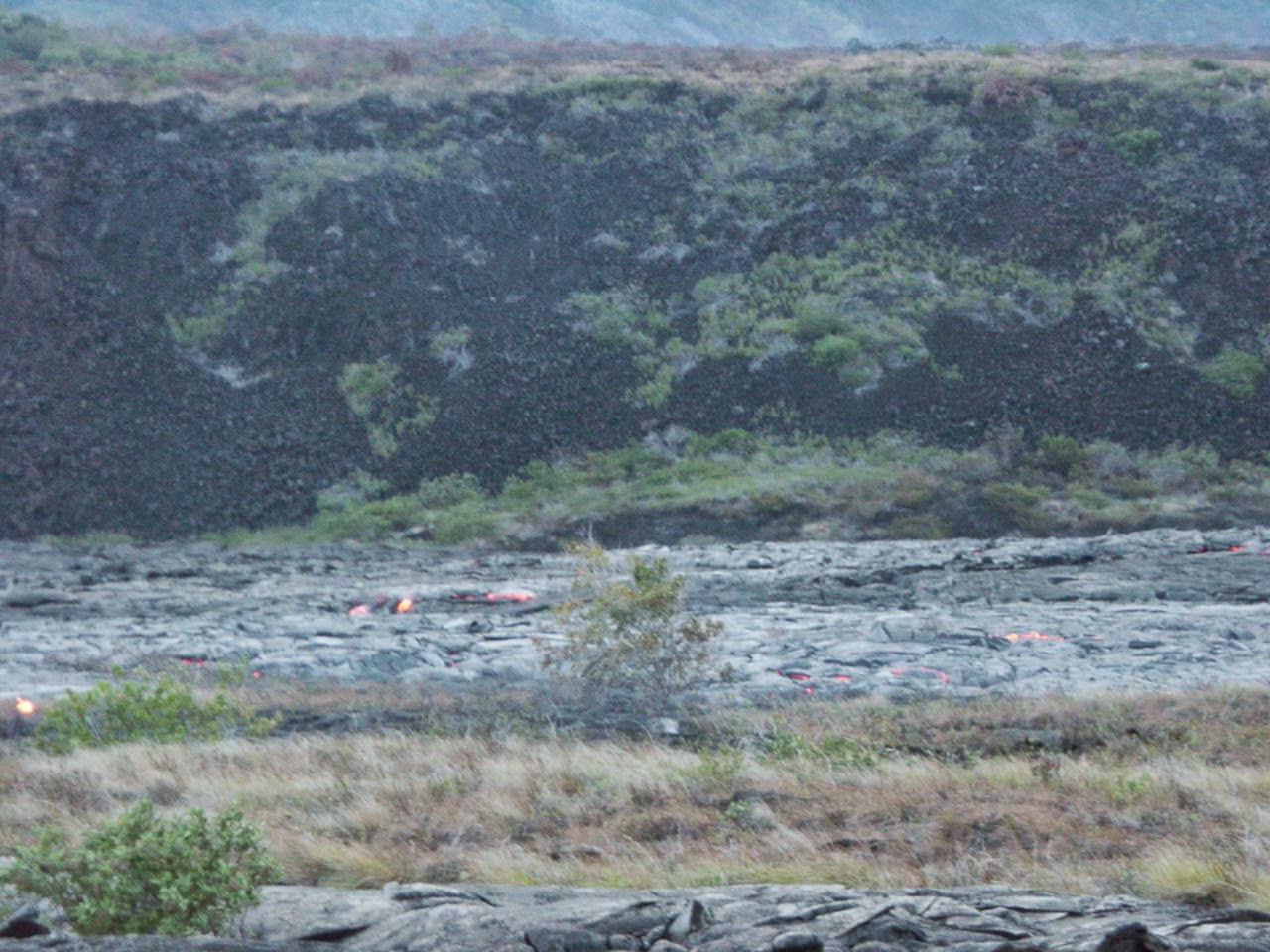 I soon realized that I had active lava flows on three sides of me, and small fires were burning where the lava was engulfing shrubs. And then I was there at the leading active edge of the flow. It was one of the most unusual moments of my life. There just isn't anything that quite prepares you for standing inches away from molten basalt. It wasn't scary so much as it was hypnotic. I couldn't help staring at it in wonderment. This might be hard for some of you to believe, but for a few moments I forgot I was holding a camera and a video recorder. That didn't last long, because in mere minutes I was snapping away. 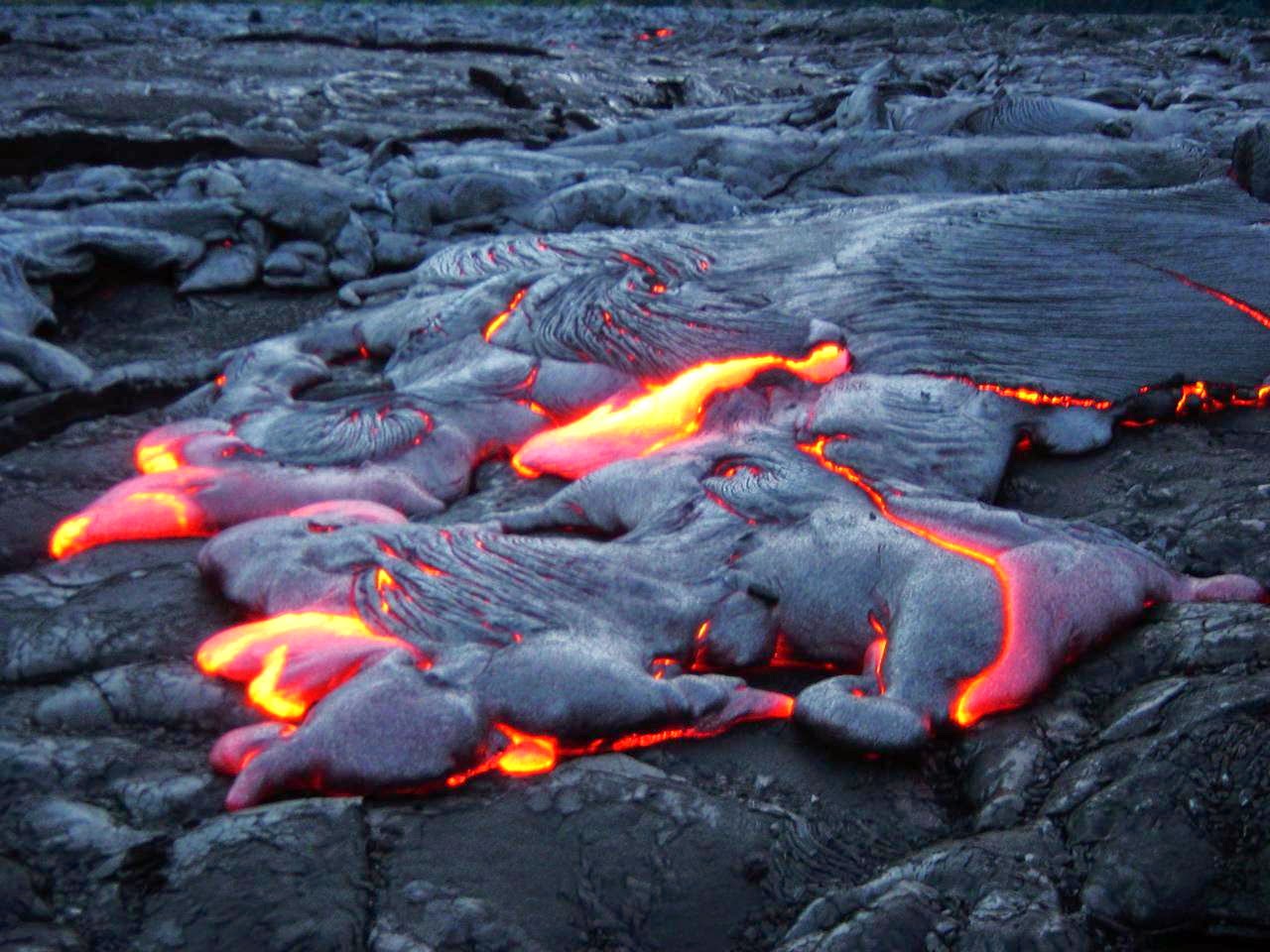 This was one of my first journeys with a digital camera, so I had a bit of trouble getting sharp pictures in the dim light from sheer ignorance of the capabilities of my camera. I got a few half decent shots of one of the most awesome events I had ever witnessed. Oh, but how I wish I had been carrying the camera I have today. I guess I'll just have to wait for the next big eruption! 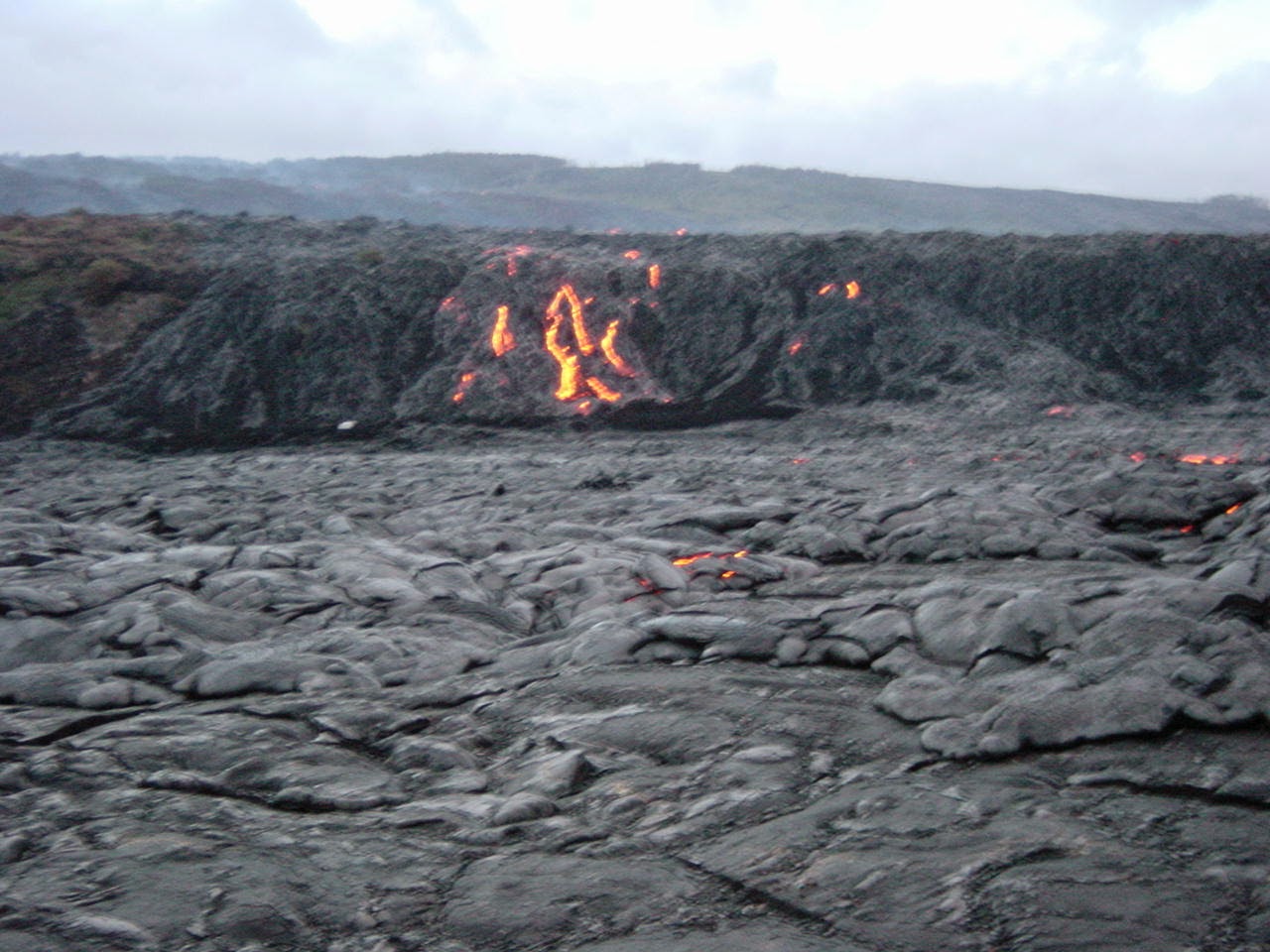 When I was younger, I had a preoccupation with the idea of being the only human ever to stand in a particular place. I knew that most inhabited parts of the world had been trod by generation after generation of people, so I wondered how many times in my life I had actually put my feet on a spot that no other person had ever stepped. After my adventure in June of 2002, I know that I was the only person in all of human existence who ever stepped on a small plot of rock at the leading edge of an active lava flow. The rock had only existed for a few minutes when I stepped onto it while preparing for a picture. It was engulfed a few short moments later by the advancing basalt. 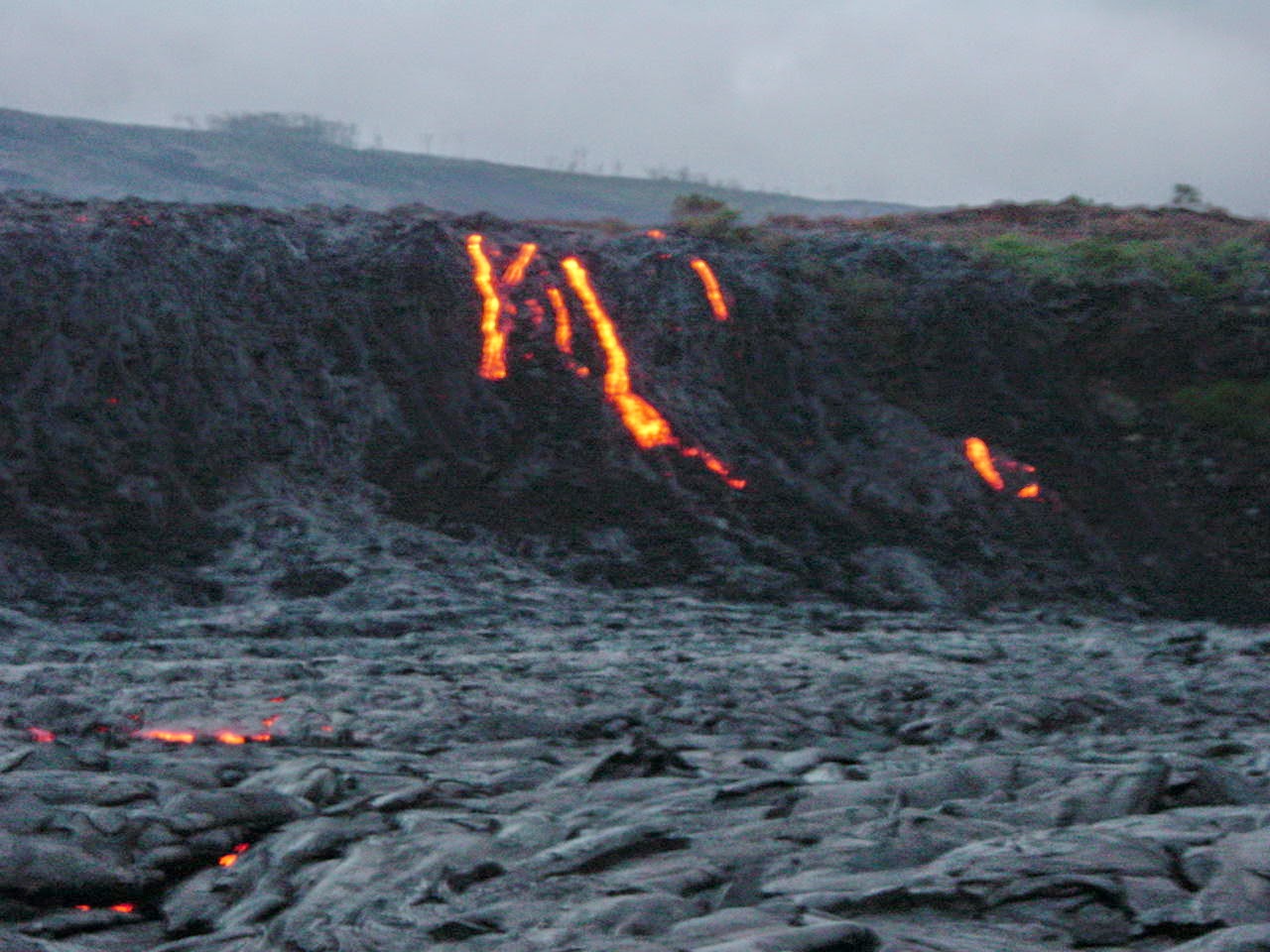 The lava began pouring into the sea just a few weeks later, in July of 2002. Soon most of the flow was hidden in lava tubes, visible only through a few skylights or breakouts, or along the coast where the lava met the waters of the Pacific Ocean.
Posted by Garry Hayes at 11:19 PM