The Other California: Clark Fork of the Stanislaus, a quiet version of Yosemite 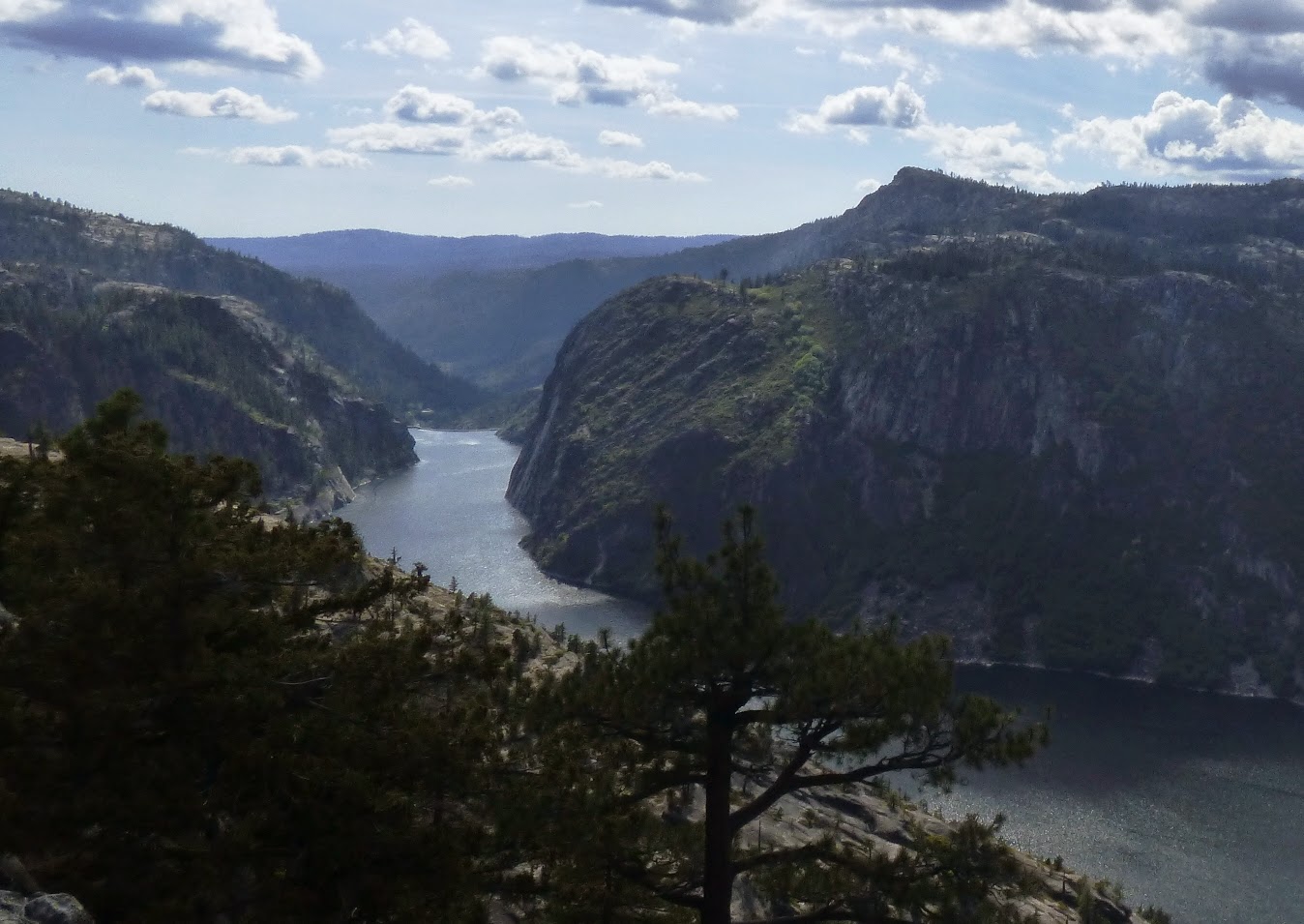 It's not really fair, of course. No place is like Yosemite, and I shouldn't compare Clark Fork to Yosemite. I doubt there is anywhere in the world that can compare to Yosemite Valley with the high waterfalls, sheer cliffs and strangely shaped domes. But there are some things that are not so nice about Yosemite. It's been used and abused for the last century and a half, and today something like four million people crowd into the few square miles of valley floor. It can be noisy, smoky, and crowded. It's possible to find lonely places on the valley floor where nature still dominates, but it's not easy. 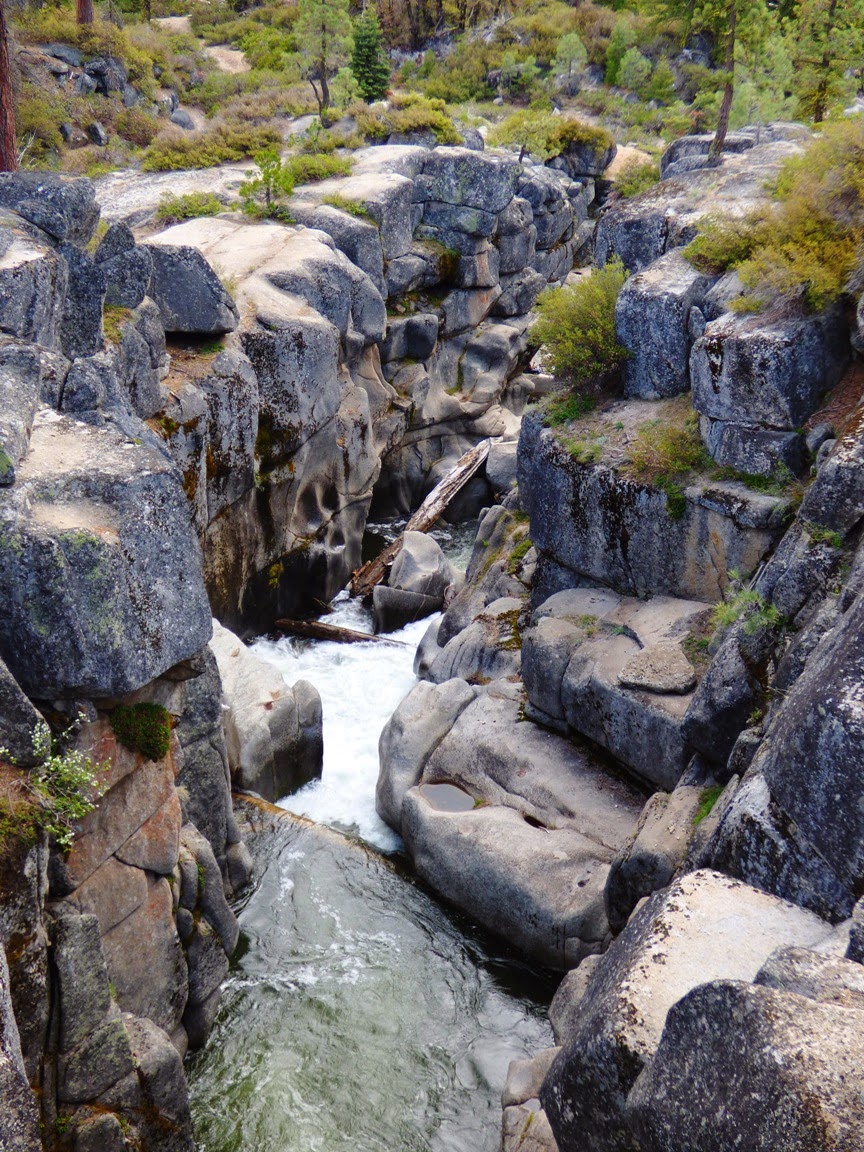 Clark Fork on the Stanislaus River is a world apart from Yosemite Valley. Like Yosemite, it was carved by river erosion, followed by glacial scouring, although not to the same depths. There are small waterfalls and cascades, but nothing like the stunning leaps of Yosemite Falls or the others. 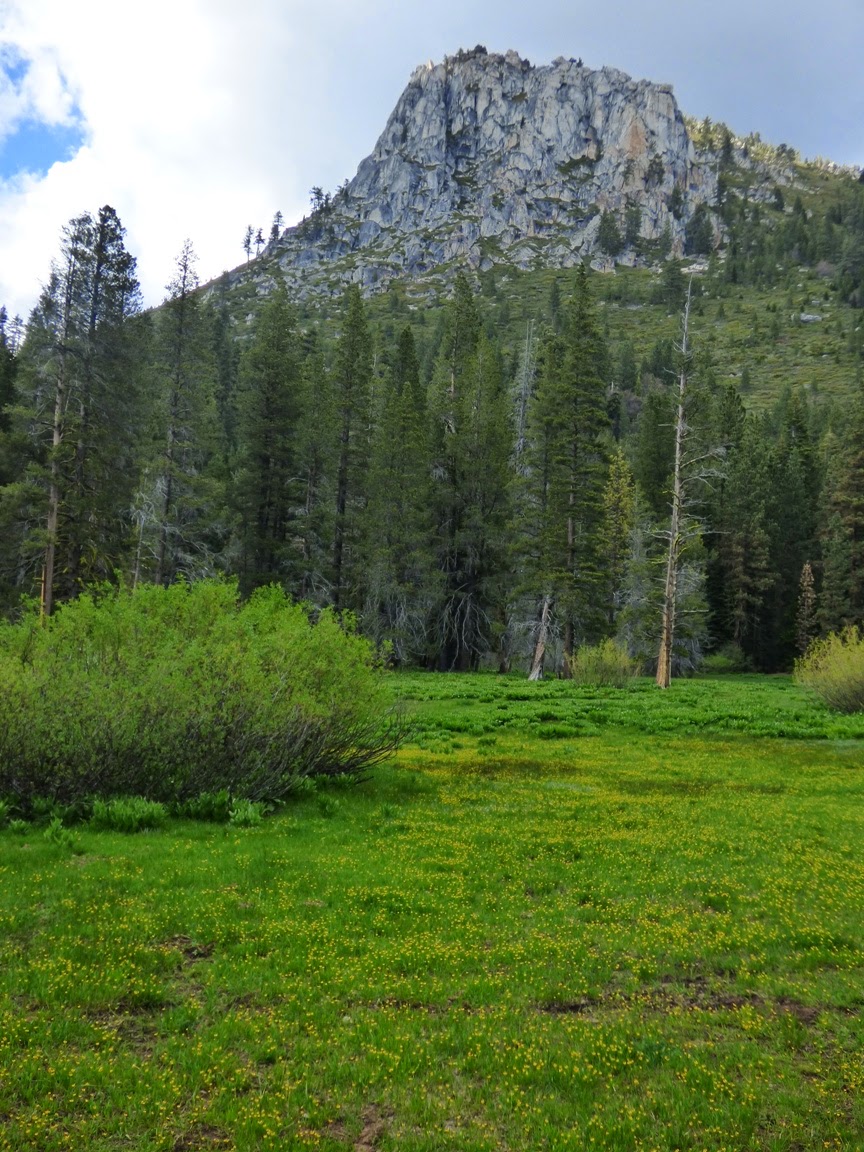 What is there is in Clark Fork is peaceful and uncrowded serenity. A single paved road diverges from Highway 108 and follows the valley for nine miles, passing just a few organizational camps and three campgrounds. No resorts, no stores, and no crowds. We were there on Memorial Day weekend, and there were still campsites available on Saturday evening. The road ends at beautiful Iceberg Meadow, which at this time of year was filled with Water Plantain Buttercups (to the best of my guessing) 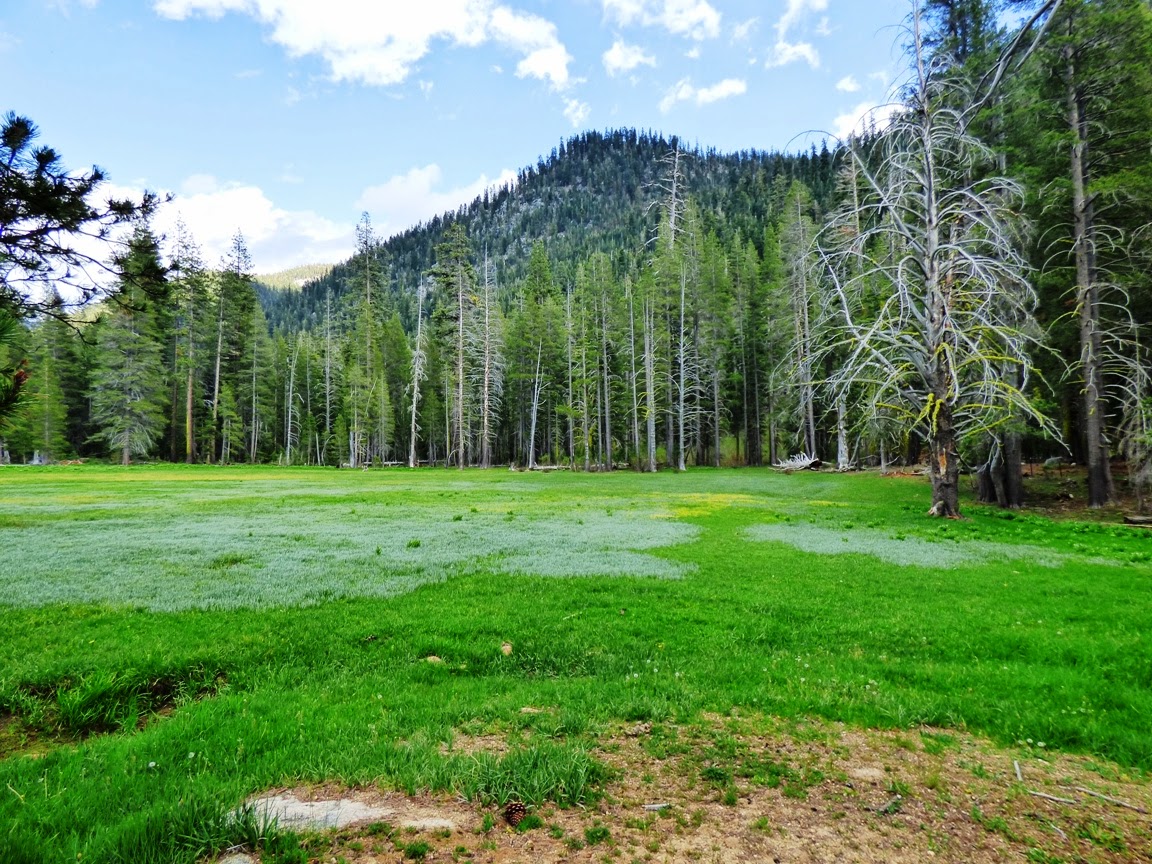 Brooding over the meadow is the unique granitic monolith called simply The Iceberg. It's 8,350 feet high. From the perspective of the meadow it looks like a prominent peak, but a look at the topographic shows it to be the last knob of a long divide between Disaster Creek and Clark Fork. Just two miles away, Disaster Peak rises 1,600 feet higher. 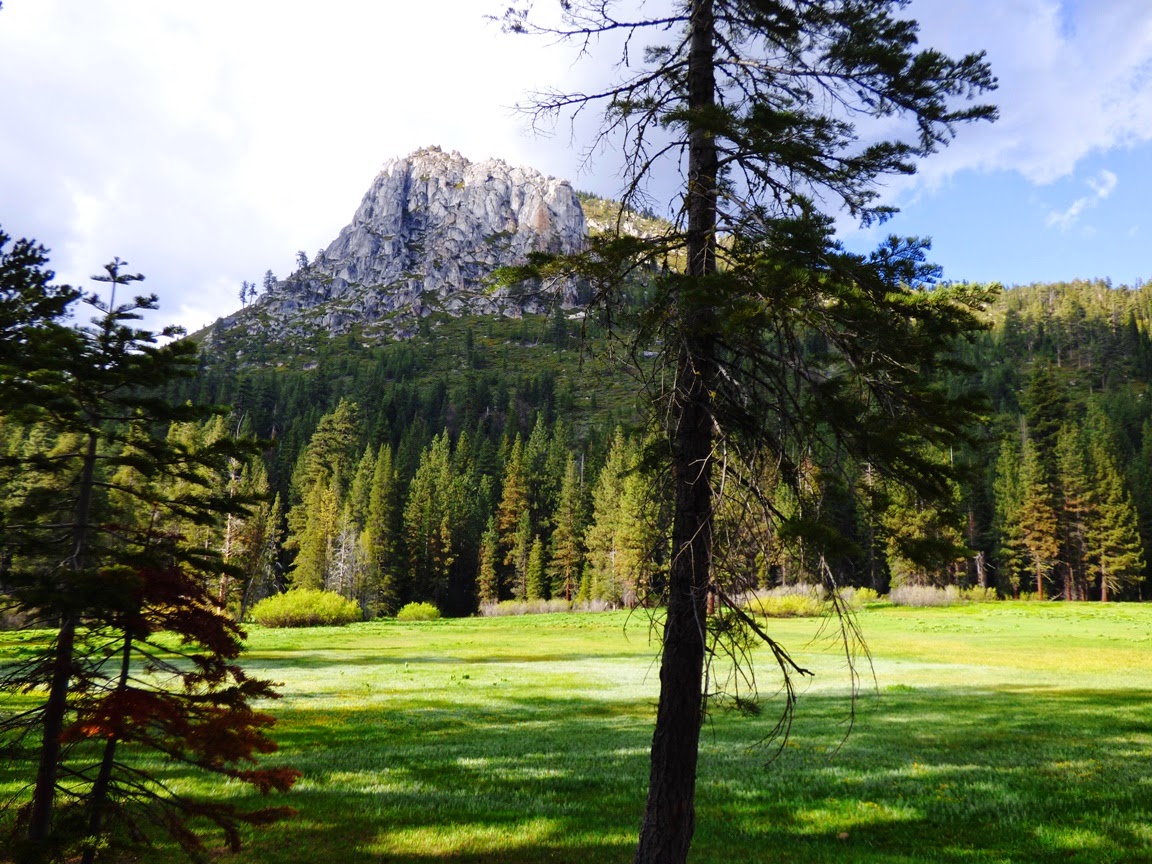 The peak is composed of the granodiorite of Topaz Lake, which at about 84 million years is one of the youngest granitic intrusions in the Sierra Nevada batholith (granodiorite is similar in appearance to granite, but contains more plagioclase feldspar and mafic minerals that makes it slightly darker in color). The rock is broken up into joints that are caused by pressure release when the rock is exposed by erosion. This explains the general lack in Clark Fork of bold cliffs like El Capitan or Half Dome, which are relatively less affected by jointing. The rocks of peaks like the Iceberg are more readily eroded by glaciers, which can pluck out the jointed blocks or rock.

Very much unlike Yosemite, there is an abundance of volcanic rocks on the higher ridges above the valley. They are visible from various points along the road and can be accessed by trails that lead up Clark Fork and side canyons like Arnot and Disaster Creeks. Similar volcanics are found along Highway 108 near the summit of Sonora Pass. As noted in the previous post, these rocks were erupted between 10 and 12 million years from a volcanic center along the Sierra crest, similar in appearance to the Mt. Lassen volcanic complex further to the north. 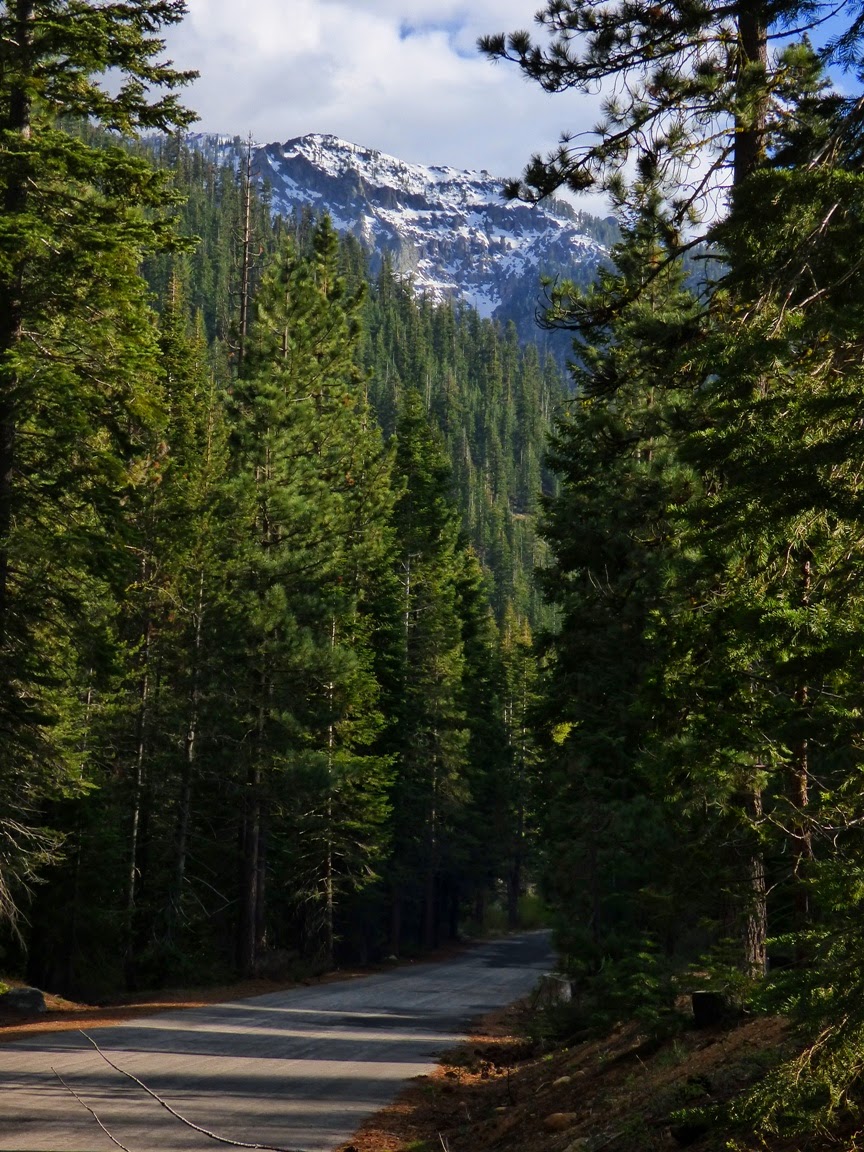 We didn't have a lot of time on our visit last Saturday, but we walked around Iceberg Meadow and saw not a single other person. Cattle are still allowed to graze in the region, but the meadow itself is fenced off to preserve it from damage (deer have no problems jumping the fences). Despite the drought, the meadow is a bright emerald green in places, though in some parts it looked bluish from the impending bloom of some irises or other swamp flowers. It's only May, and it should be still partly covered in snowbanks, but we'll take the short spring over none at all. I hope the drought breaks this year...

Clark Fork is a wonderful part of the Sierra Nevada, one of those largely ignored corners of a beautiful mountain that would probably be a national park in any other setting. It is the kind of place that John Muir wrote about in the Mountains of California when he said “Climb the mountains and get their good tidings. Nature's peace will flow into you as sunshine flows into trees. The winds will blow their own freshness into you, and the storms their energy, while cares will drop away from you like the leaves of Autumn.”


This is one of the irregular entries in my blog series called "The Other California" which existed long before any Toyota commercials with a similar slogan. It is an exploration those places in my fair state that don't always show up on the tourist postcards, but which have incredible geology and are scenic to boot.
Posted by Garry Hayes at 8:55 PM

Great photos and info about a beautiful place!

Thank goodness for "peaceful and uncrowded serenity"! And thanks for the Other California series, it's a valuable resource.

This sounds much more pleasant than the crowds in Yosemite.

Hiked up the Clark Fork Trail a couple of weeks ago. The great thing about Hwy 108 and more so the Clark Fork, no one there. Just the sites, smell and sound of the fork of the Stanislaus River. Can't get enough!

My first trip to Clark Fork was over 50 years ago. The Donnell fire burned through the Stanislaus River canyon and destroyed Dardanelles, Fortunately, the fire spared Iceberg Meadow, the campgrounds and Clark Fork's banks and surrounding watershed. The fire's impact is obvious when first entering Clark Fork Road just off 108 but drive a few miles in and it's just as beautiful as it was a half century ago. Fishing is still fantastic, especially where Clark Fork flows through Iceberg Meadow. It's one of my favorite California spots - accessible, beautiful, and uncrowded!