Through the Looking "Glass" and into the Rabbit Hole: A Tour of the Black Diamond Mine

Barren open pits, overburden stripped away, ruined rivers, flattened mountain tops. It doesn't have a very good reputation and probably doesn't deserve it. Yet even today it provides a significant part of our energy mix, despite the destructive effects it has on our atmosphere, land, water, and the lives of the miners themselves. A hundred years ago it provided much more of our energy. 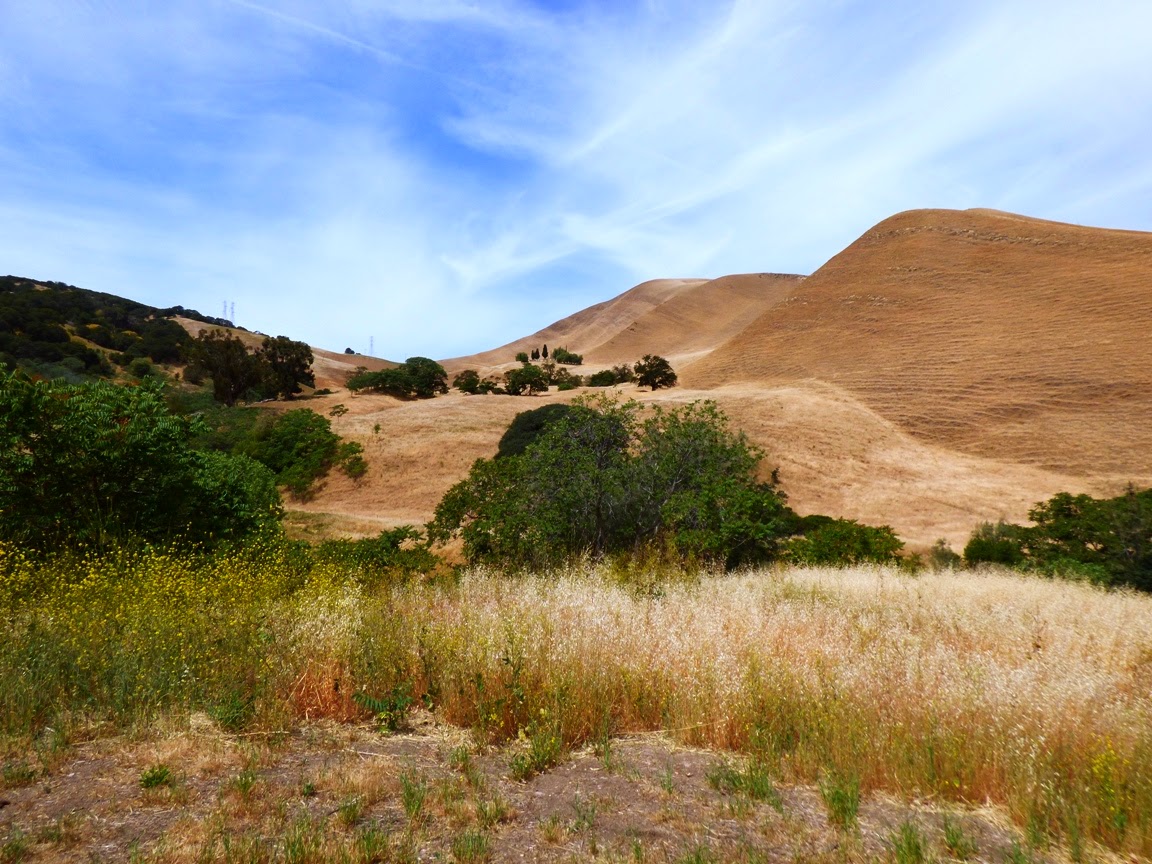 California doesn't have much of a reputation for coal mining. During the middle and late Paleozoic, when widespread parts of the eastern United States and parts of Europe were covered by forests, swampls and coastal estuaries, California was pretty much underwater, and no major coal seams ever formed.

The situation was a little different about 50 million years ago. The Ancestral Sierra Nevada, the mountains that formed while granite was cooling deep in the Earth, had been worn away, and the modern Sierra Nevada had not yet begun rising. Large meandering rivers coursed across the landscape, bringing sediments into the coastal complex from sources as distant as central Nevada and Idaho. A shallow sea filled the forearc basin that paralleled the Pacific coast, and along its margins there were beaches and barrier islands, along with coastal estuaries and jungles of tropical vegetation. The river and coastal complex formed a sedimentary layer called the Domengine Formation (in the Sierra Nevada foothills, it is known as the Ione Formation and the Auriferous Gravels). It was here that coal formed in California. It was a low-grade form of coal called lignite. It had none of the quality or energy content of  bituminous or anthracite coal, but it was close to San Francisco, and it was the only coal for hundreds, even thousands of miles. Coal mining began in the Coast Ranges above Antioch in the 1850s, eventually producing four million tons before shutting down around a half century later. Several thousand miners and their families lived in five villages in the immediate vicinity, and dug miles and miles of tunnels into the hills (I've heard of upwards of 200 miles of passageways). 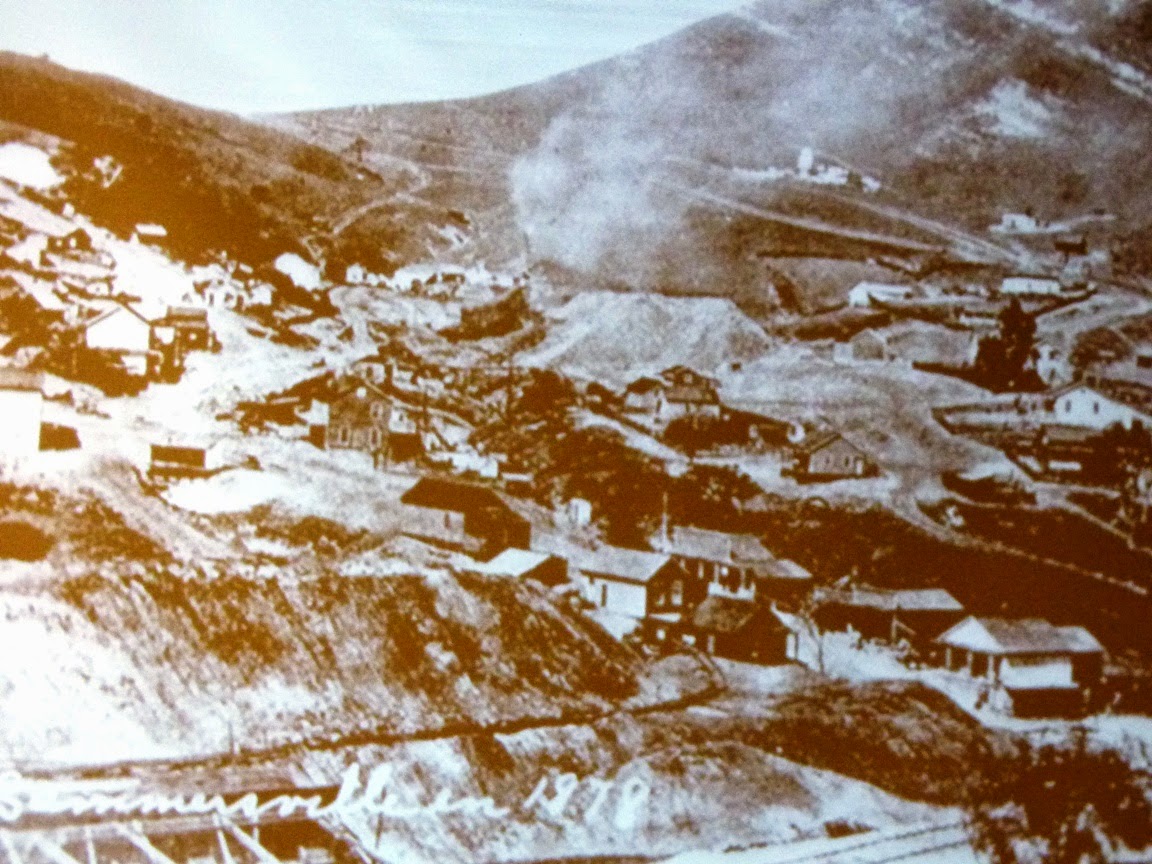 The towns faded away and many of the underground workings collapsed. In the 1920s, a new resource was being mined here: sand. Sand? What in the world for? For glass-making. It turns out that the sandstone of the Domengine Formation is very pure, almost 100% quartz. If you've ever stood on a sandy beach in California, you would know that the sand in the state is usually gray or brown in color because of the many other minerals that are present. It's only sands that have been transported along lengthy rivers and deposited in coastal regions where they would be washed back and forth for millennia that they reach that level of purity. Those were the conditions present as the Domengine was being laid down 50 million years ago. Glass mining took place through the 30s and 40s, and ultimately 8 miles of huge tunnels were excavated. That's a lot of glass bottles...

So it was that last Saturday, the Geology Club at my college finally conducted their semester field trip, two weeks after the semester was done. We headed out to the Black Diamond Mines Regional Preserve, a unit of the East Bay Regional Park District to have a tour. Not a tour of the former towns...we were going underground! 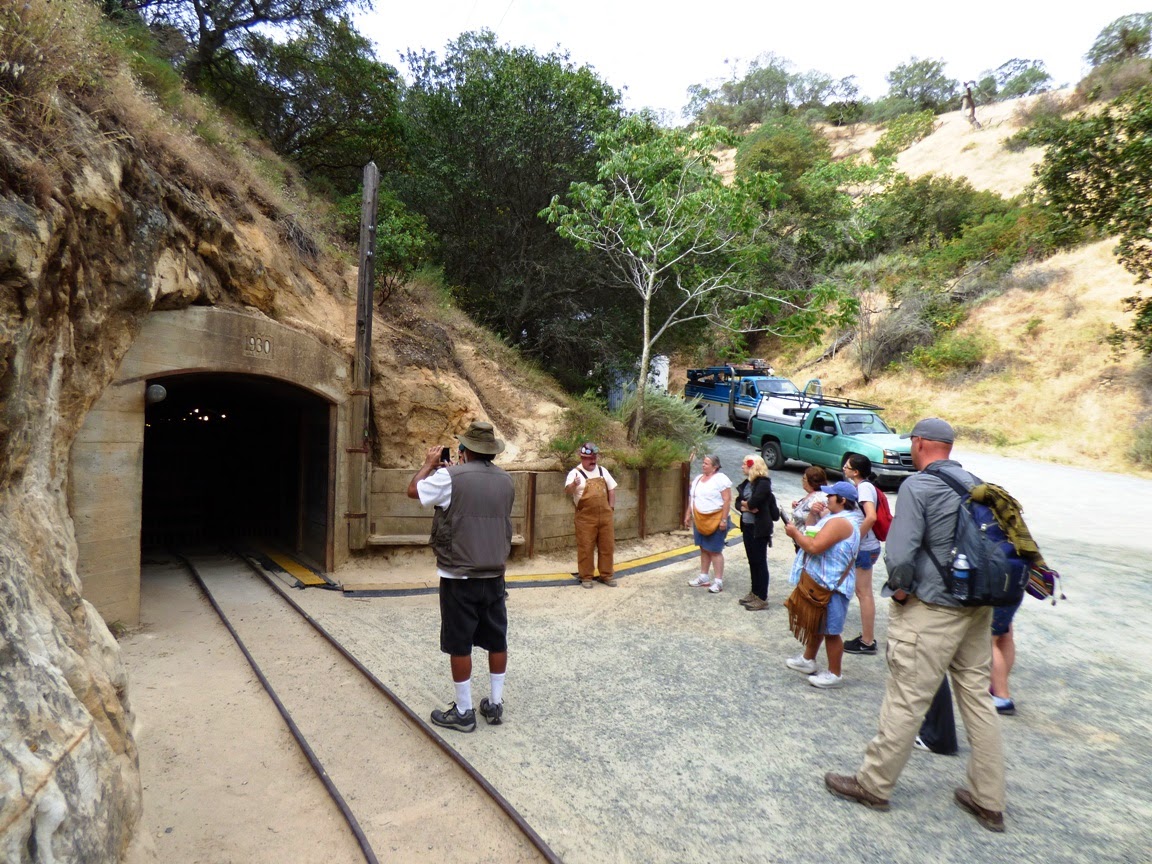 We gathered outside the portal of the Hazel Atlas mine where we met Pat, the mining technician and engineer for the park. He came to work here in 1998 to prepare for the reopening the mines for tours after safety concerns shut them down in 1989 after the Loma Prieta earthquake. 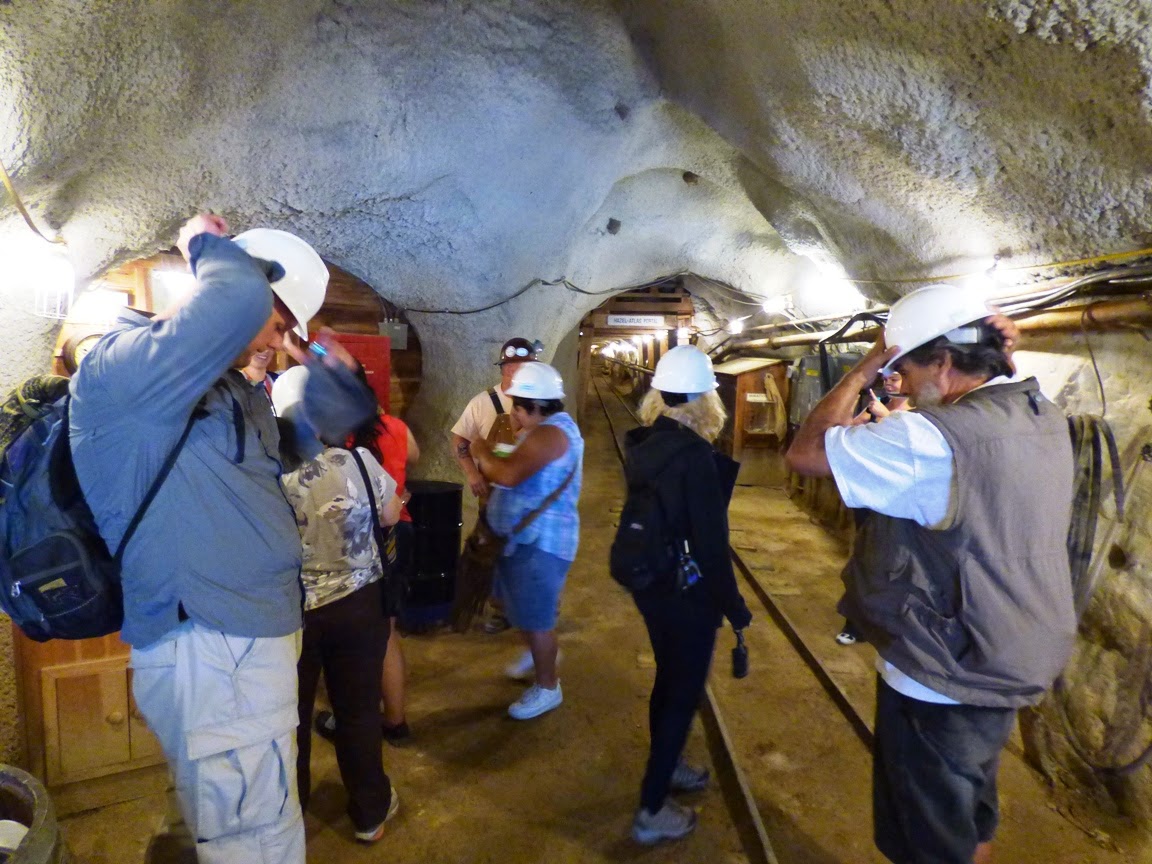 We donned our hardhats, grabbed flashlights, and headed into the main portal. One thinks of mines as dark dank places, and I'll bet they were to the original coal miners, but with lighting and white colored walls of sand, the tunnel was actually fairly bright, at first not really different than walking down a corridor in a factory. 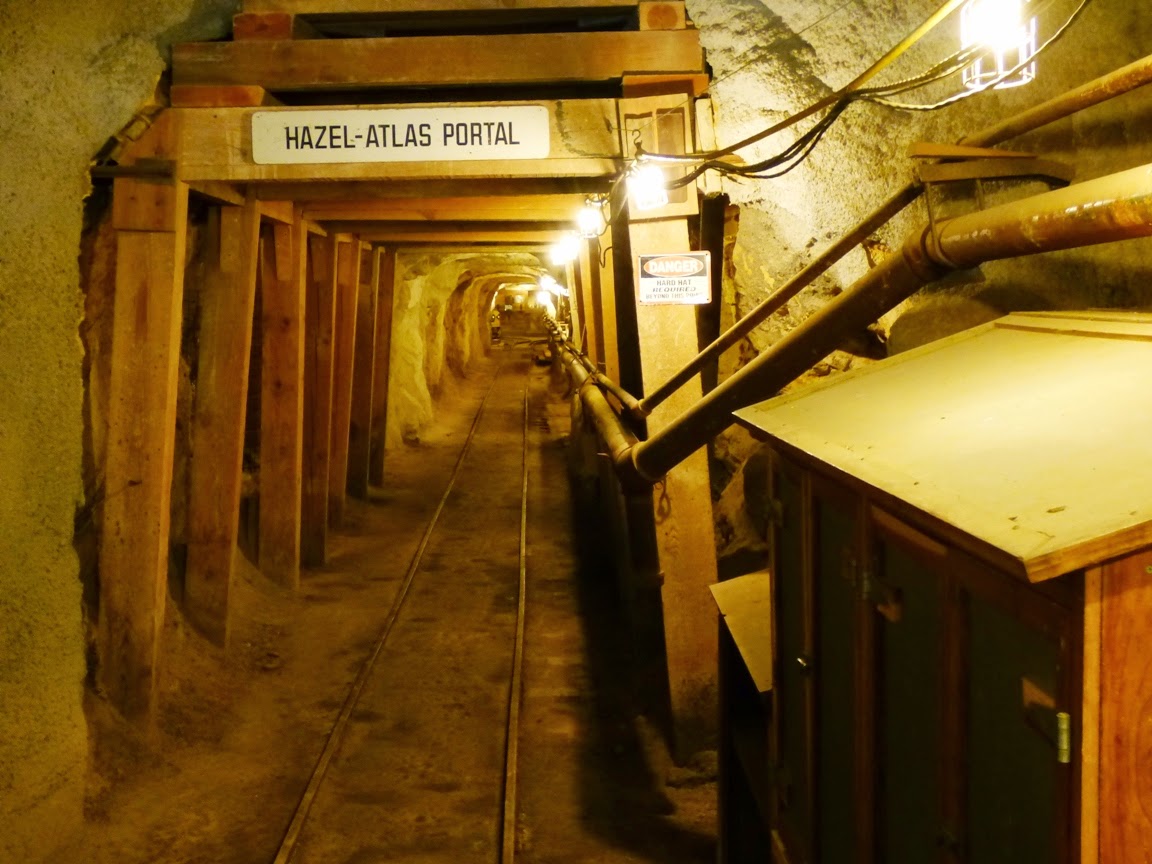 The main adit intersected one of the thinner coal seams in the Domengine Formation. The miners in the 1800s generally followed the seams until they thinned out to a foot or so. The thickest of the coal seams, the Black Diamond vein, averaged 40 inches thick 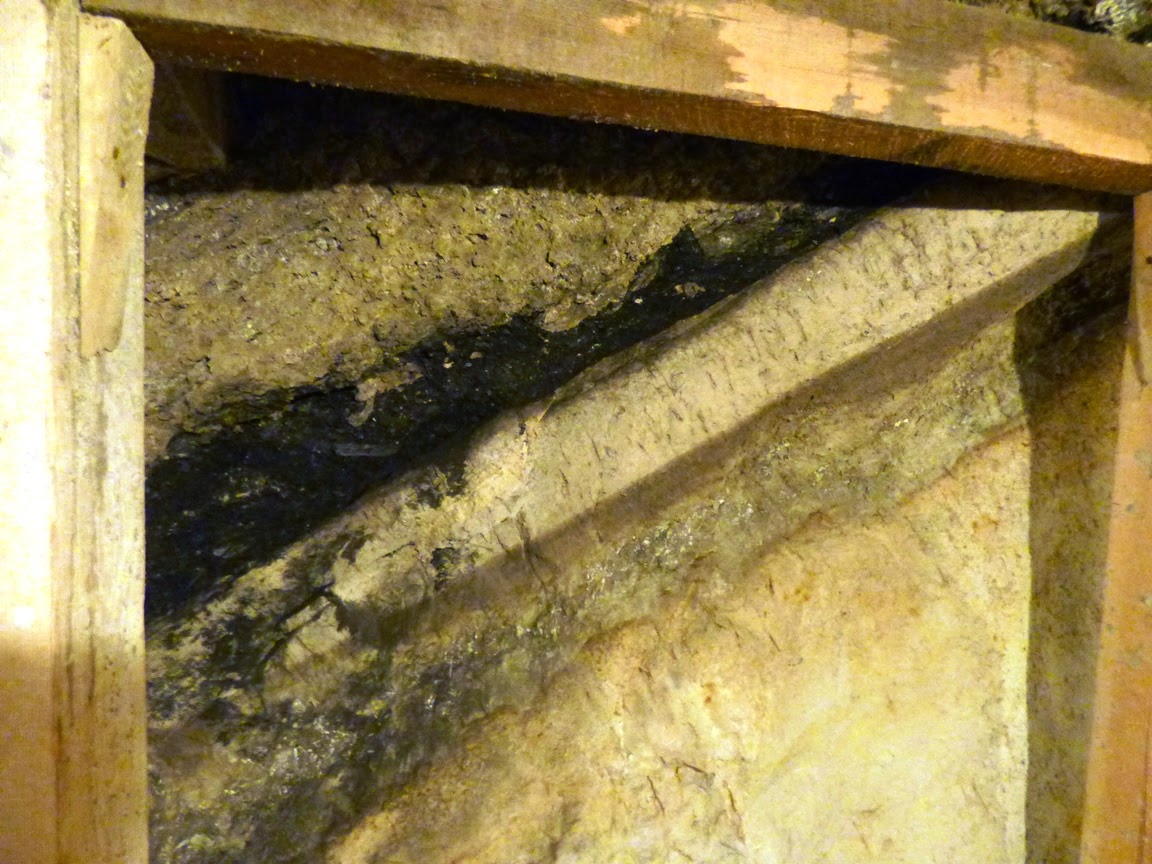 One can see in the picture above that the layers in the mine slope about 30 degrees. The miners accessed the coal seams from the lower end and excavated their way upward, allowing gravity to do some of the work for them.

The walls of the mine reveal other signs of the depositional environment of the sandstone. In the picture below are some crossbeds, formed in coastal dune complexes. 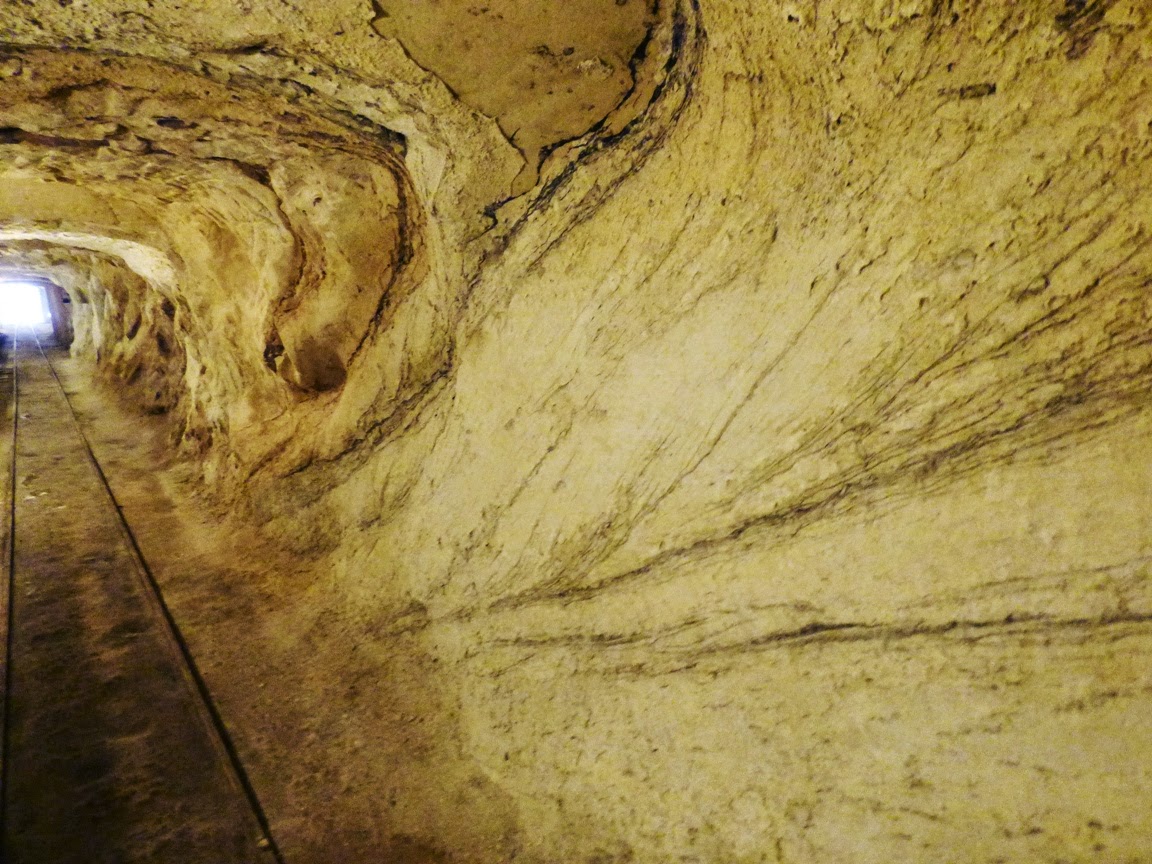 Farther in, the sand layers broke away to reveal symmetrical ripplemarks, which indicate oscillating waves in shallow water. Although I didn't get good shots, there were trackways of worms in some sand layers, and burrows from crabs or shrimp. Such disturbances of sediment by biologic activity is called bioturbation. 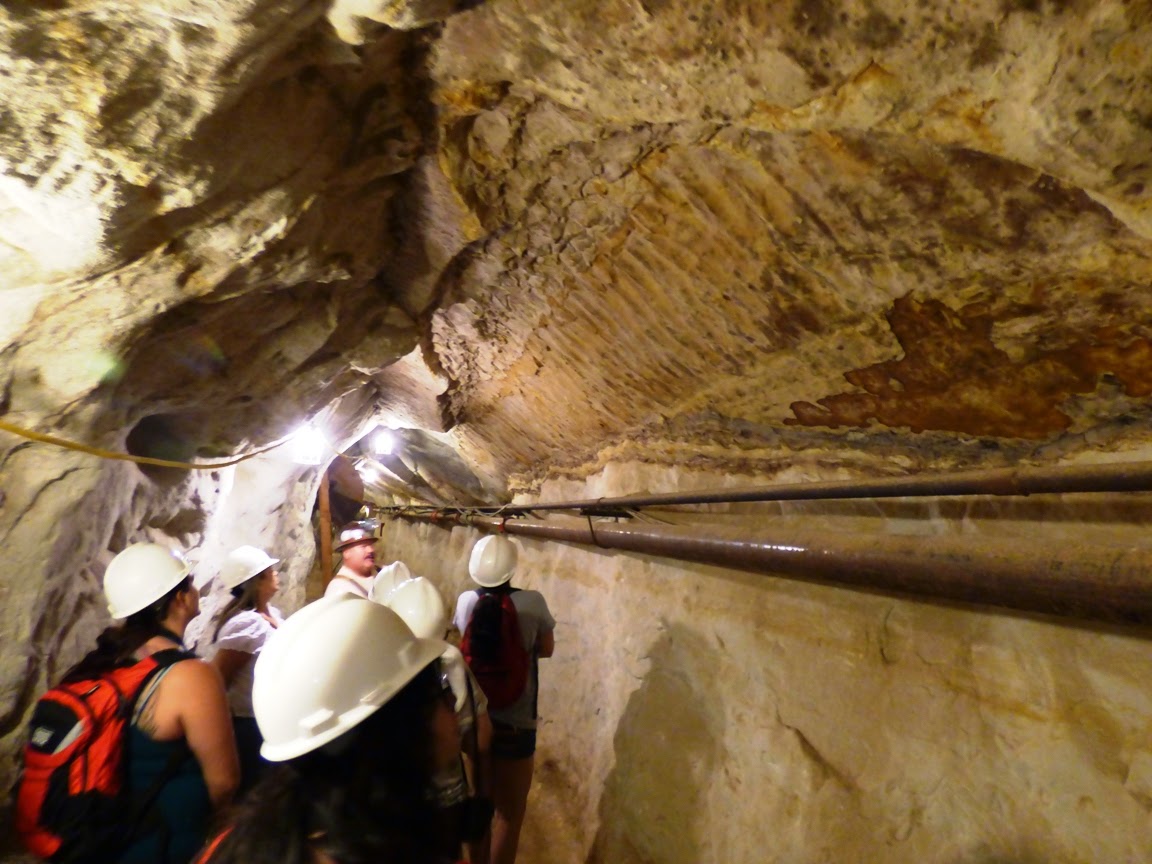 By this point we had gone several hundred feet into the mountainside, and the tunnel turned 90 degrees to run parallel to the surface. 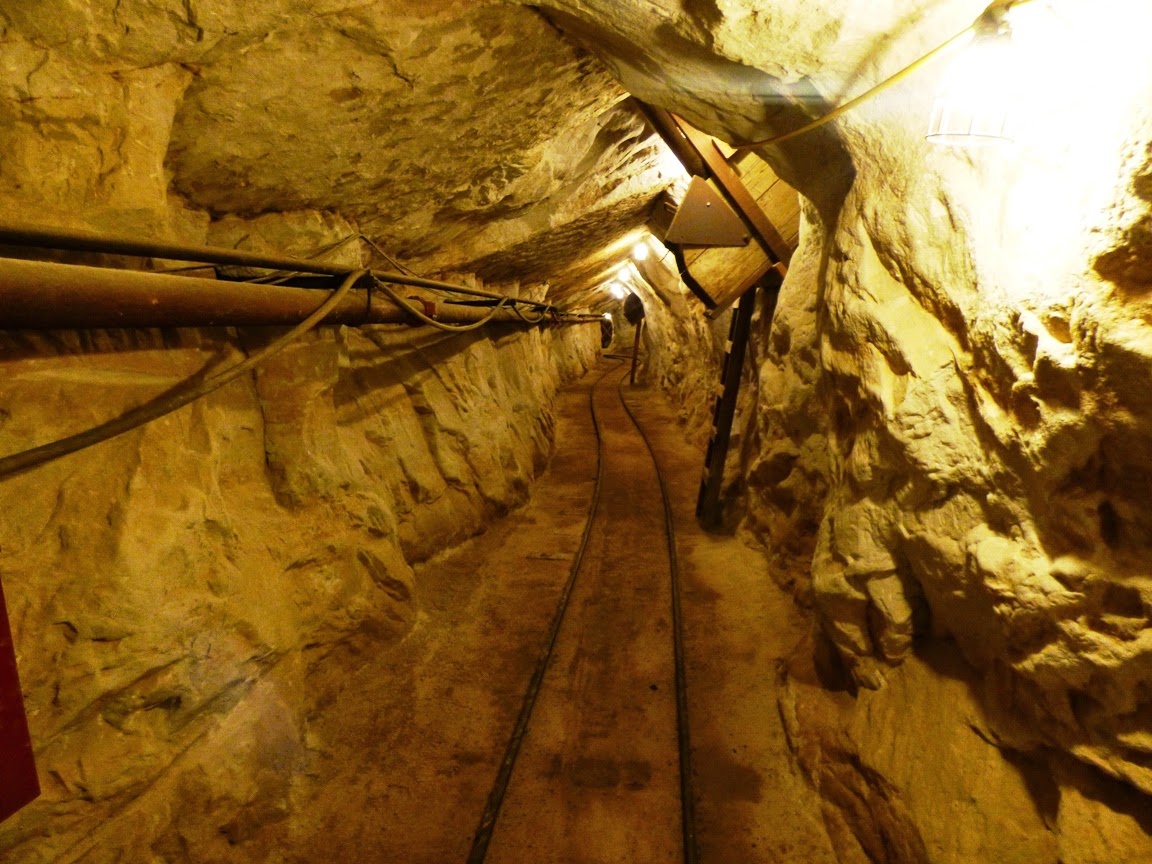 We had reached the main part of the mine, where excavation was done by the room and pillar method, where large chunks of sandstone were left in place to support the ceiling of the mine, in many places 6o feet above our heads. It's not often that I am in underground chambers this big. I almost expected a Balrog to come around a corner ("You shall not pass", he said, wielding his rock hammer like a wizard...) 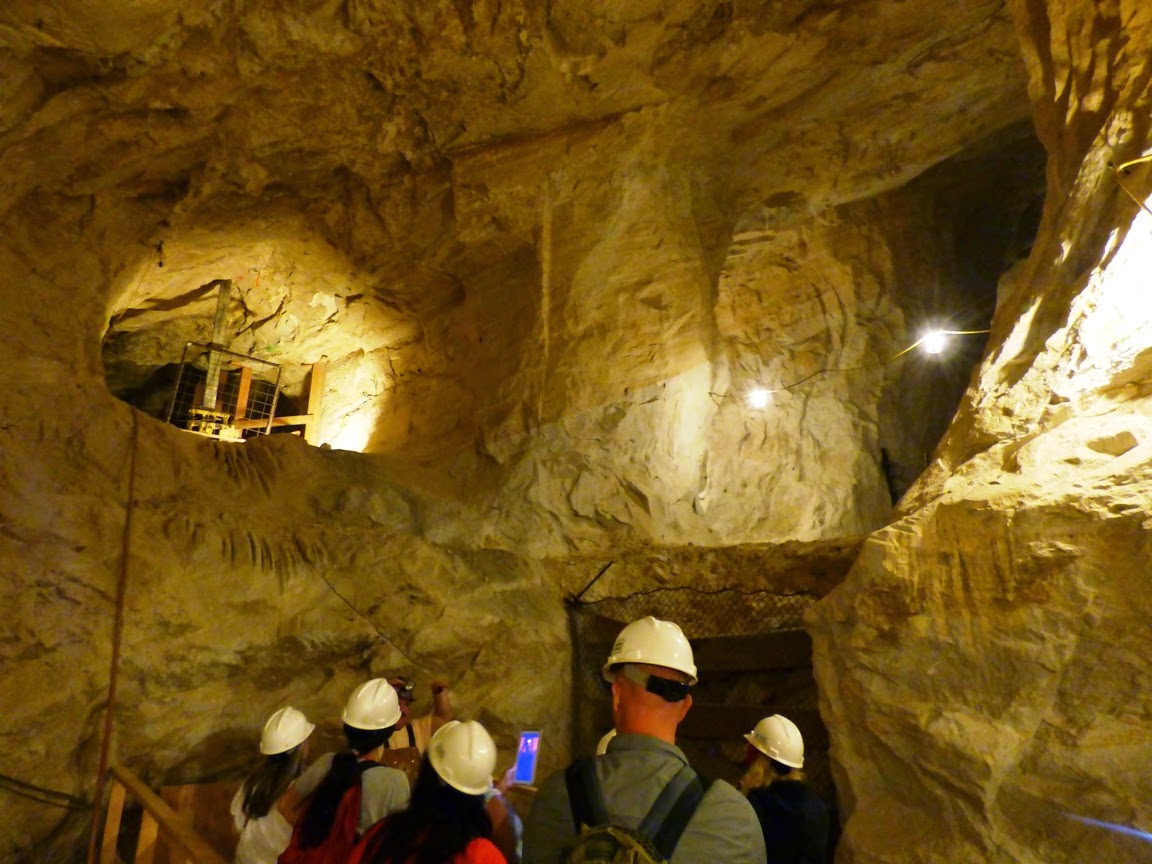 There were dark unlit pits too. The dark squares on the left in the picture below are rock bolts, drilled into the rock to hold unstable jointed rock in place. Pat reported that chunks of rock do occasionally split off the walls and fall. One of his jobs is to locate such rocks along the main tour tunnel and either stabilize them or pull them down. That actually sounds like fun, even if a bit dangerous. 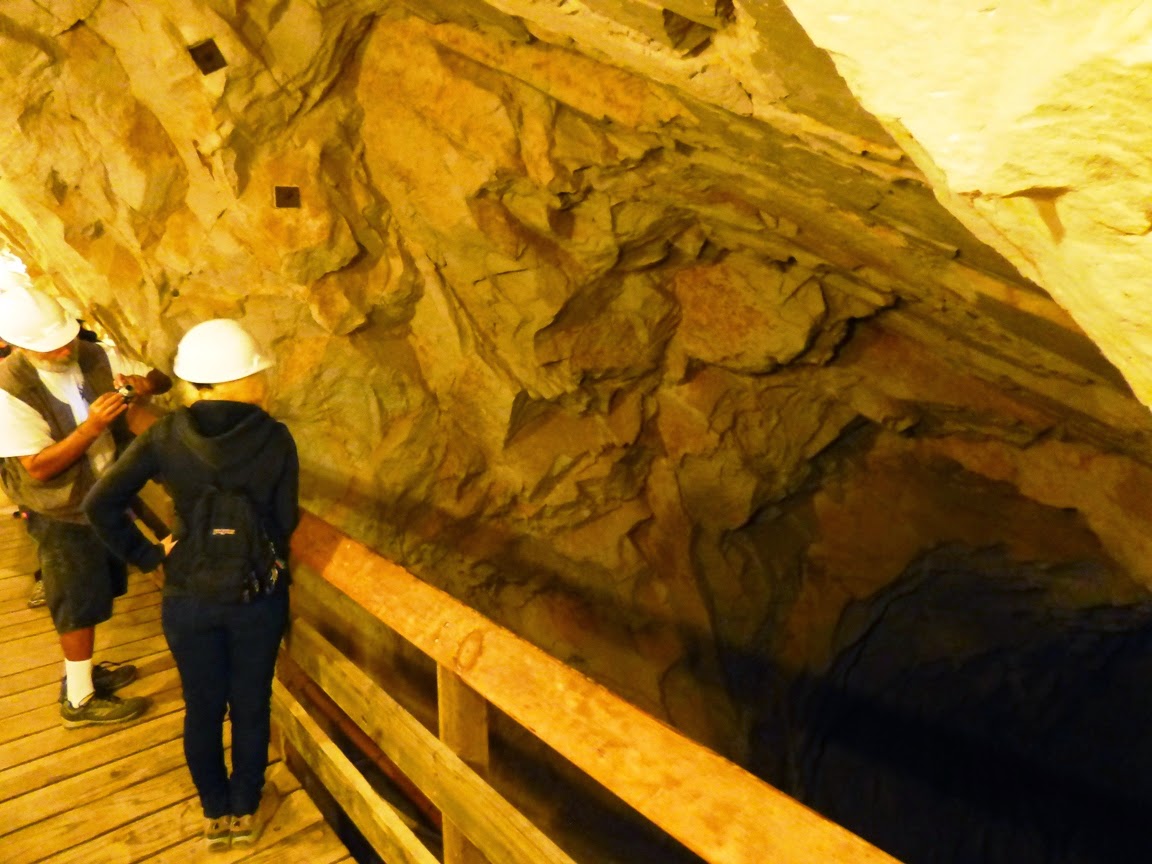 We had reached the end of the regularly scheduled tour, and found that there is an escape route out of the mines in the event of a collapse. We continued on, following the escapeway, because there was some good geology still to be seen! 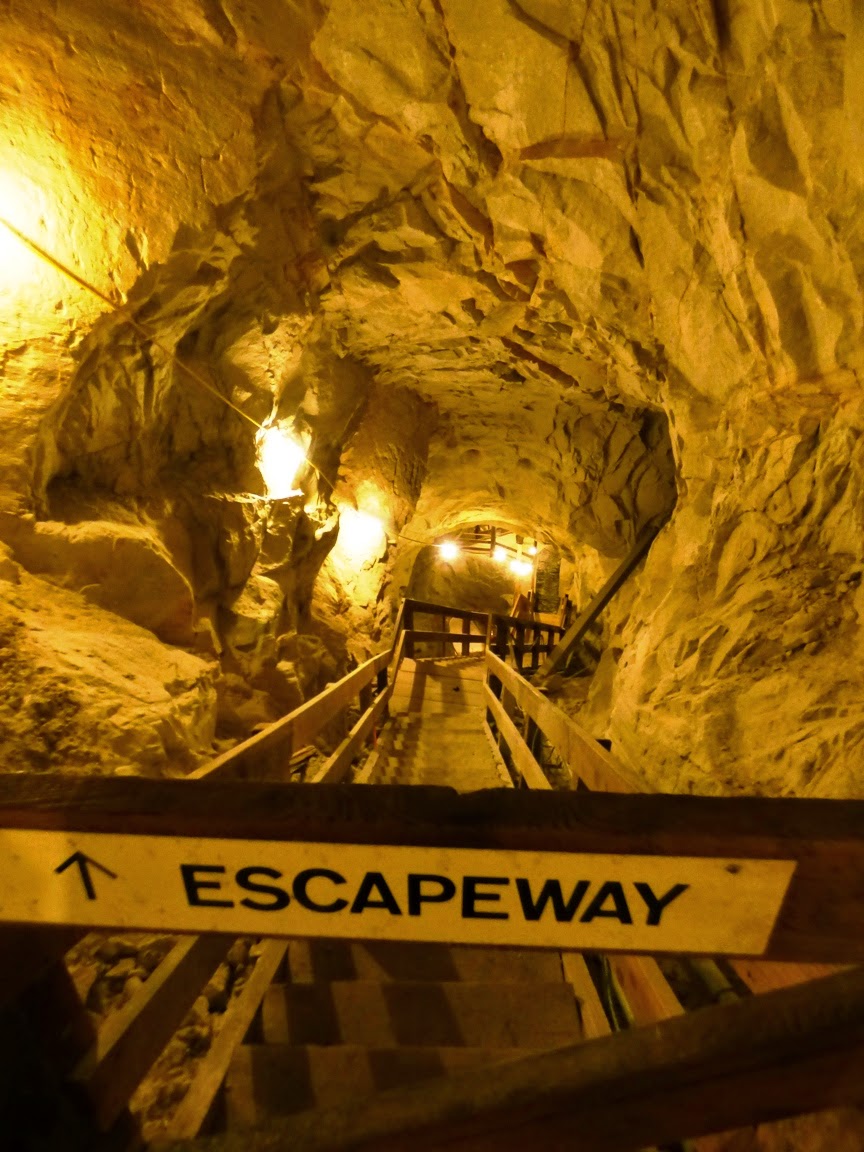 We were now following a stope back towards the surface. 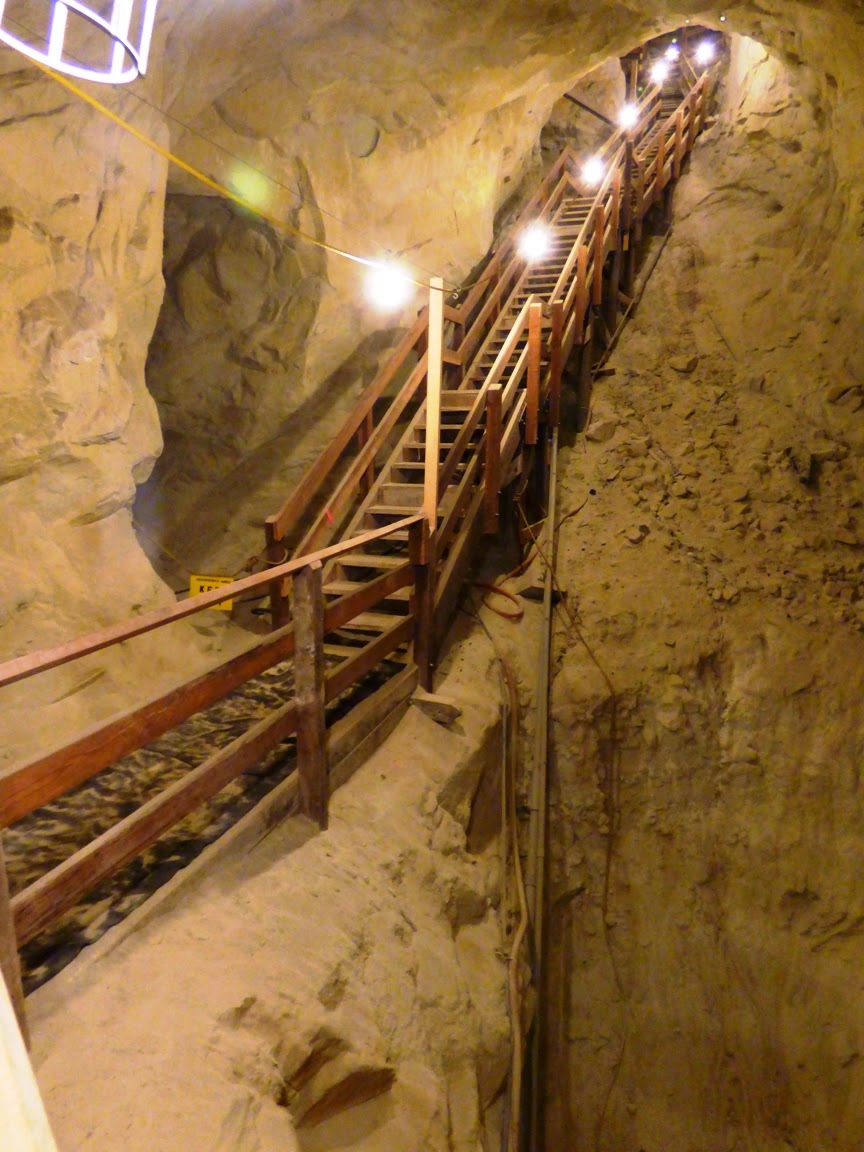 We intersected one of the coal seams, and could see why the coal mining was so dangerous. The rock was much softer and incompetent. They occasionally have problems with the coal because it generates noxious gases. When the sand mine intersected with one of the old coal mining passageways, there would occasionally be a spike in carbon dioxide or other gases, and the coal tunnel would have to be isolated to keep the air fresh. 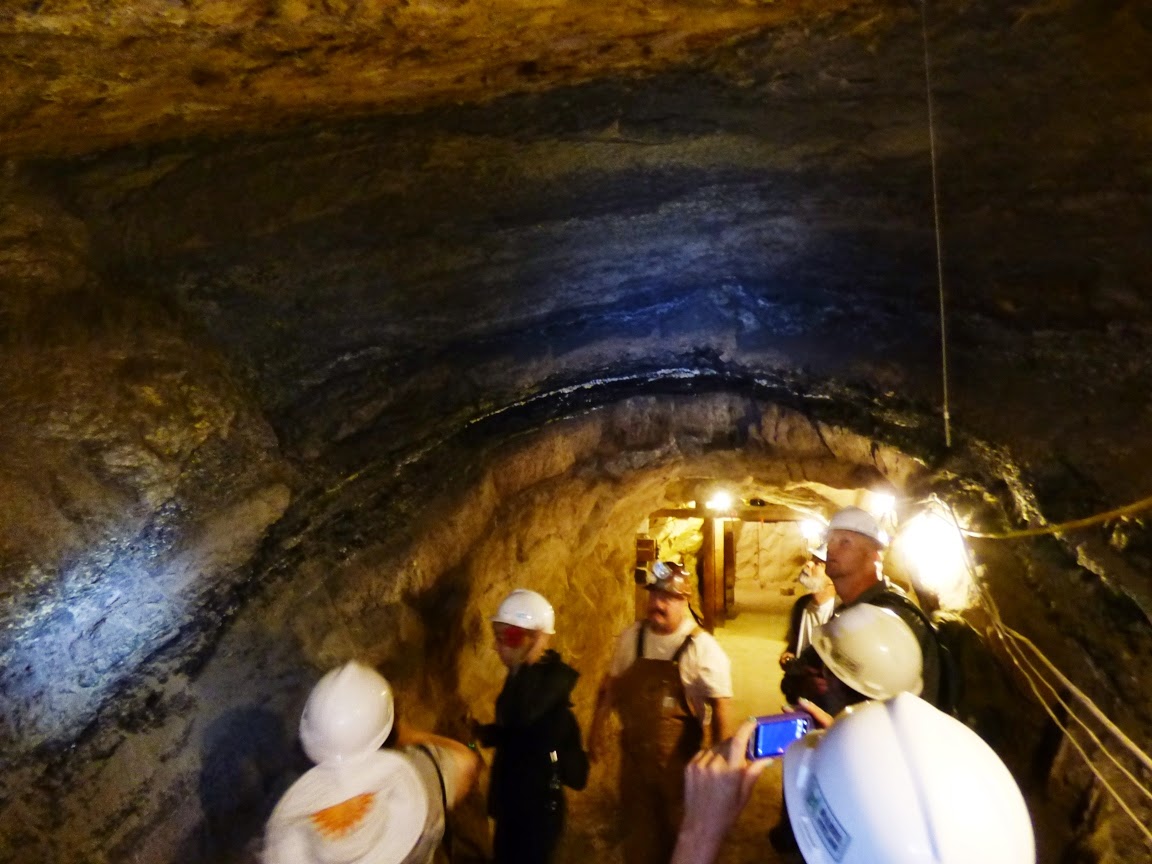 I was surprised by how good the air was. The temperature was about 56 degrees and there was usually a current of air blowing through. It was not at all like some mining tunnels I've been in. I don't think there is any worse feeling than warm stagnant air in a dark tunnel.

Near the exit, we had a view down into the Eureka slope, one of the coal mines active in the 1860s. The picture below doesn't provide the downward perspective. It sloped about 30 degrees or more and disappeared in the darkness below. Visiting a coal mine? Fine. Working in one every day of one's working life? No, thank you. I like the job I have now. 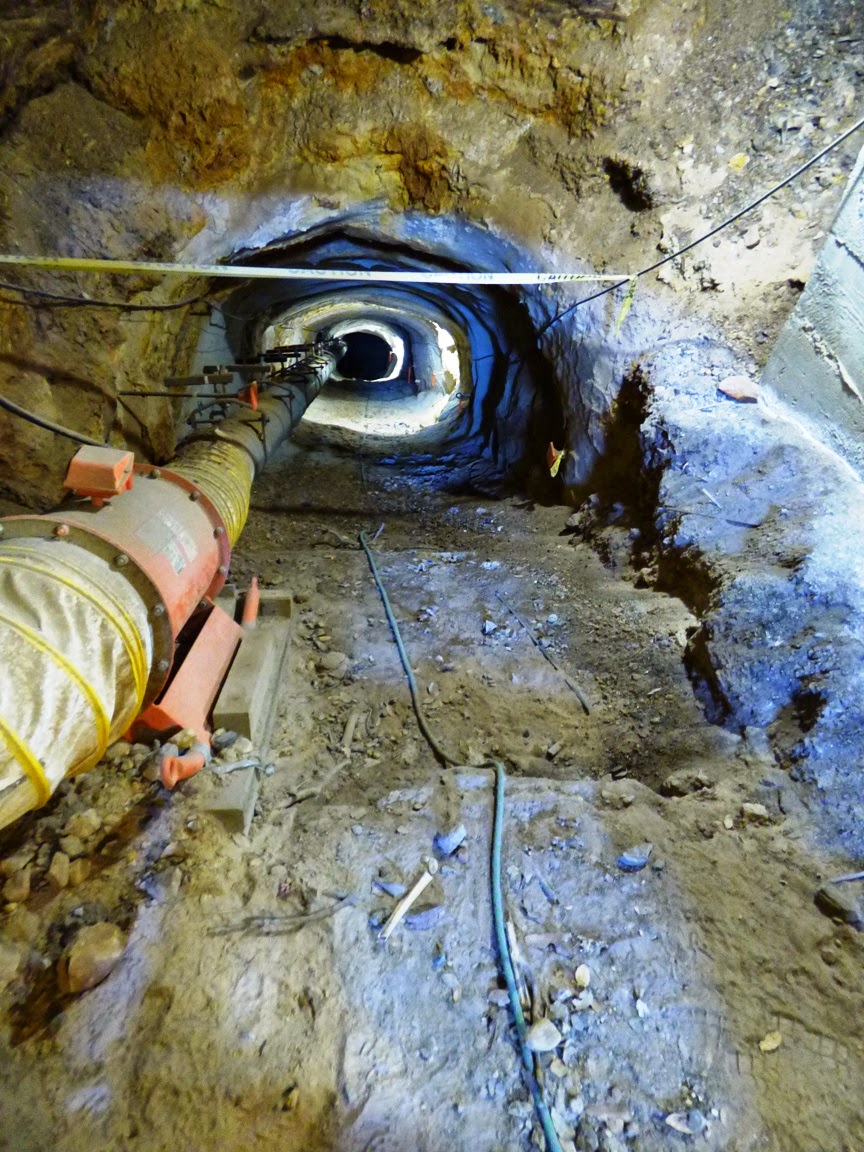 We approached the surface after close to a half mile of walking underground. We had barely begun to explore the intricate boxwork of passageways in the mine. The visitor center occupies a particularly large tunnel at the other opening to the mine (the "emergency exit"). 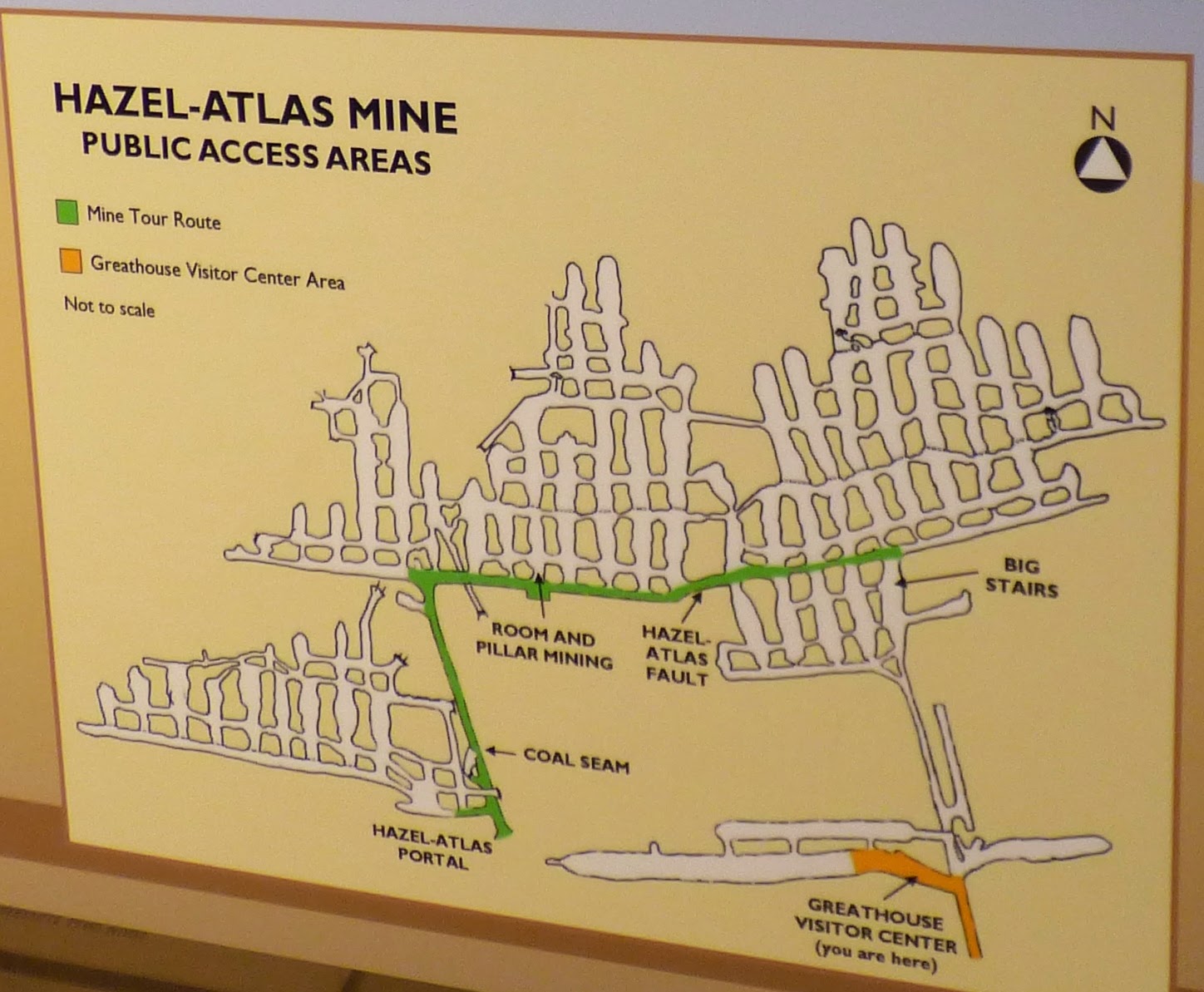 We emerged back into the world of sunlight and blue sky.

Although there are occasional tailings piles of coal here and there, the region has recovered nicely from the mining days, and is a nature preserve today with miles of trails and picnic areas. More information about the park can be found at http://www.ebparks.org/parks/black_diamond. It's well worth a visit! 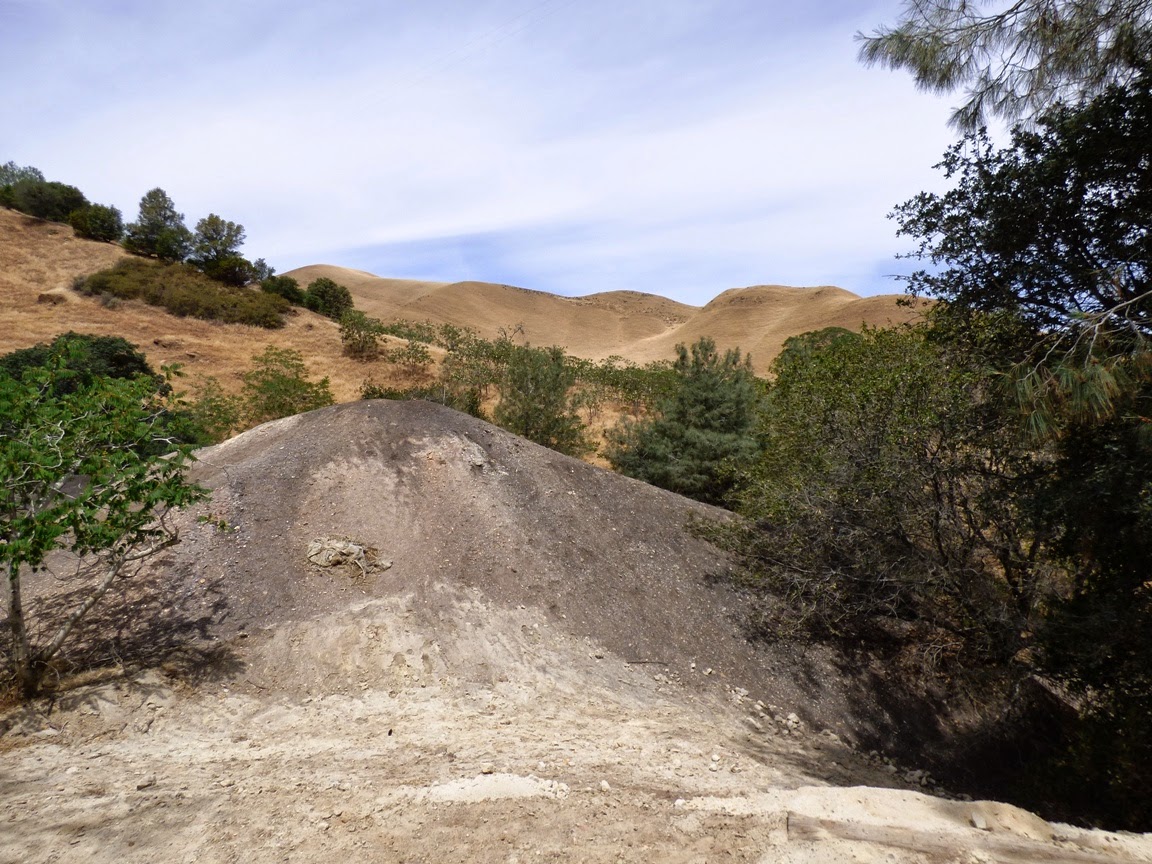 How many vertical levels were there again?

I would like to get in touch with you about using one of your photos but i can't seem to find an email link. Would you mind emailing me at Jane(at)RaeseDesign(dot)com?