Where are the Ten Most Incredible Places You've Ever Stood? My Number 3: Standing over Dante's Inferno in the Broken Lands

Hot temperatures are an interesting feature of Death Valley National Park, but the park is much more significant for other reasons. It contains a wider range and variety of rocks than any other park that I know of. I have been chronicling our February journey to Death Valley over the last few months in a series called "Out of the Valley of Death", and today's post is a confluence of the two series that I've been working on. Dante's View was our next stop after exploring the interior of an upside-down mountain at Titus Canyon, and it makes number three on my list of the Ten Most Incredible Places I've Ever Stood. 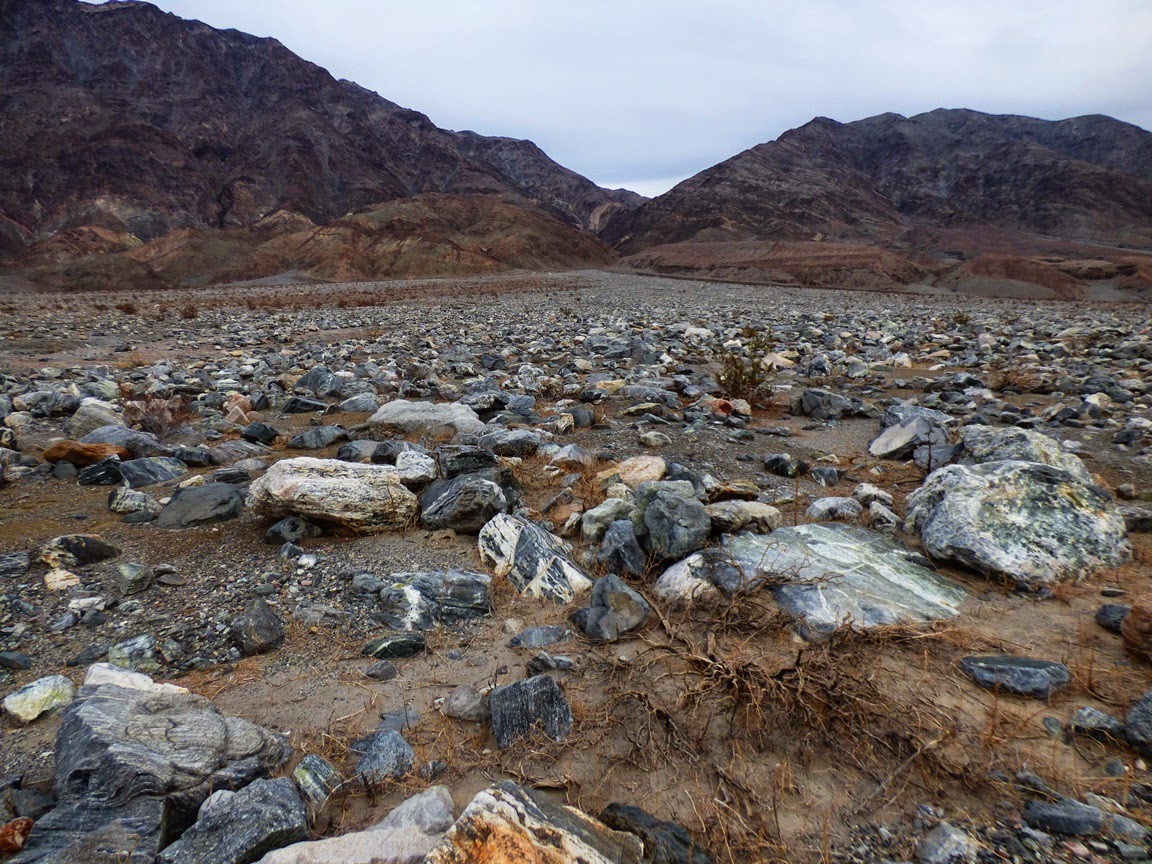 The Black Mountains of Death Valley are one of the most rugged mountain ranges in existence. They rise 6,000 feet almost straight up from the lowest part of the Death Valley graben and are practically devoid of trails or roads. The thought of climbing the mountain front near Badwater is as daunting a challenge as I can imagine. The Proterozoic metamorphic rocks are highly deformed and internally sheared by intense faulting, making for a highly unstable climbing surface. But there is a way to the top of the range. A paved highway winds up the other more gentle eastern side of the mountain range, reaching Dante's View at an elevation of 5,476 ft (1,669 m). The overlook is directly above Badwater, more than a mile below at -282 feet ( -86 m). It has one of the most incredible views to be found in any national park. 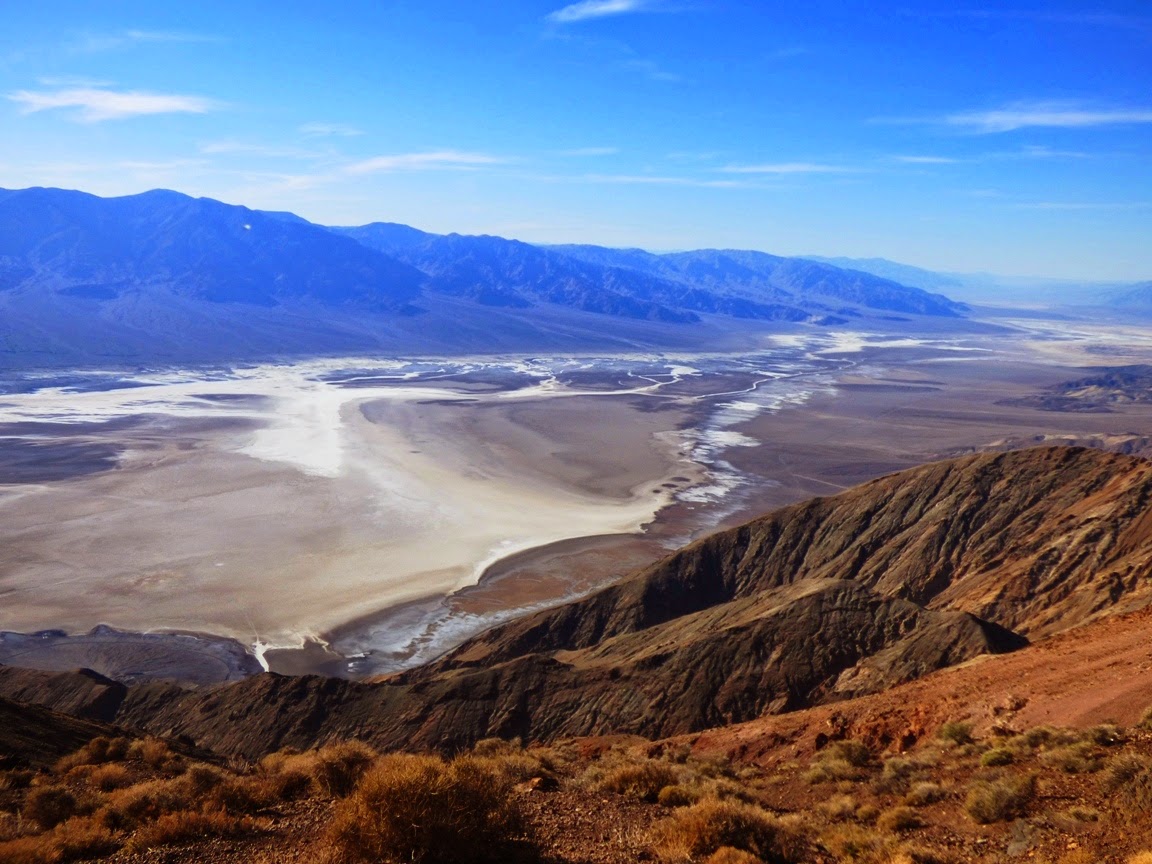 Frank DeCourten called the Basin and Range province where Death Valley is located the "Broken Land", and the description is apt. From Dante's View, thousands of square miles of land are visible as range after range marches off into the distance. In the last few million years crust in this region was stretched beyond the breaking point, and it broke into countless grabens (fault valleys) and horsts (fault-block mountain ranges).  River drainages that once reached the sea do so no longer, and water leaves the region only by evaporation. The region is sometimes called the "Great Basin" despite the multitude of mountain ranges. Death Valley is the lowest of the low, the ending point of numerous desert washes and the Amargosa "River" that sometimes in wet years has water.

At Dante's View, one's attention is most often drawn towards the salt pan of Death Valley, the lowest land in North America (in the picture above). It is quite a sight, and so alien-looking that it stood in as the location of Mos Eisely in the original Star Wars. Obi-Wan Kenobi and Luke Skywalker stood here, looking at the spaceport and mentioning that "You will never find a more wretched hive of scum and villainy". The salt that covers the valley floor to a depth of hundreds of feet was washed out of the marine sediments that make up many of the mountains in the region, and from the rain itself. Water flows into the salt pan and evaporates, leaving behind the salt and other minerals, including gypsum and calcite. 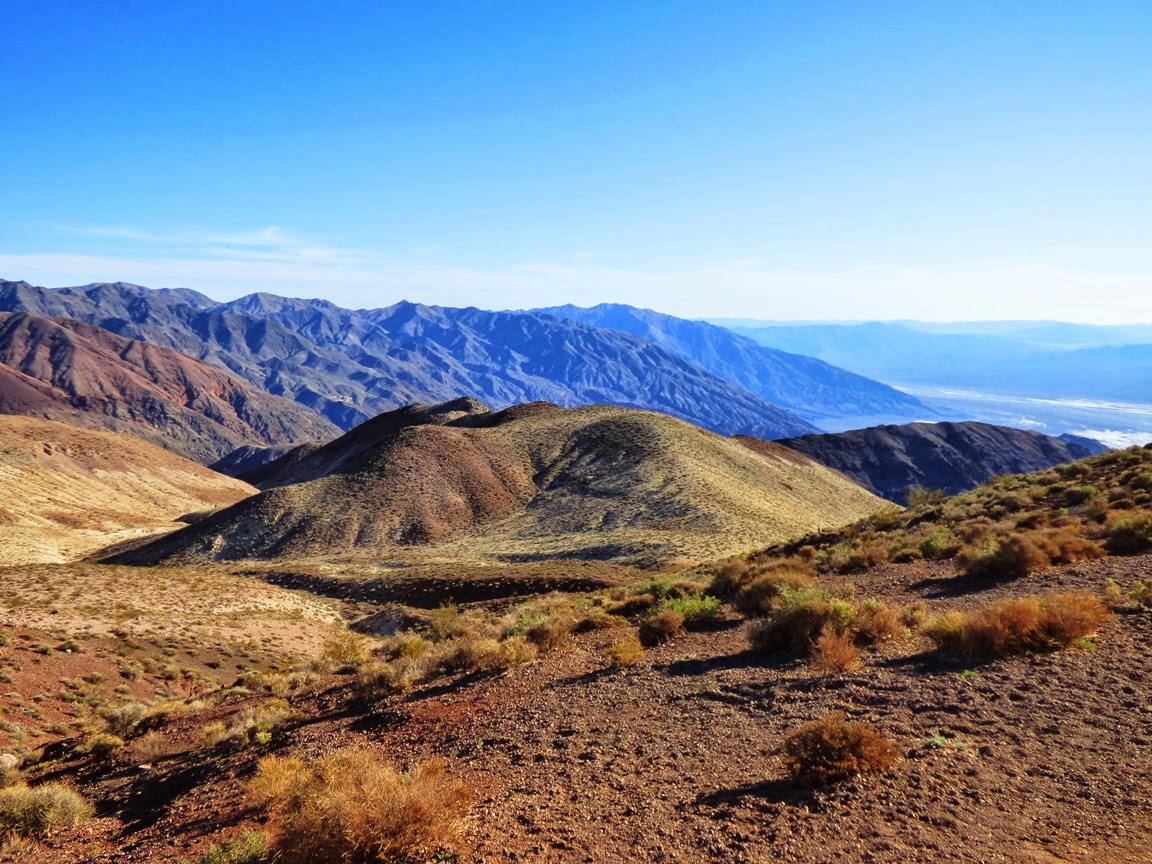 The view from Dante's encompasses, well, the entire compass. To the south (above) the Black Mountains continue for several miles, including two of the gigantic "turtleback faults". The rocks are some of the oldest in the western United States at 1.7 billion years. The dark metamorphic rocks gave the mountains their name. Although the slopes are not as hot and dry as the valley floor, it is still a tough environment for most plants. The mountains are as barren as any I've ever seen. 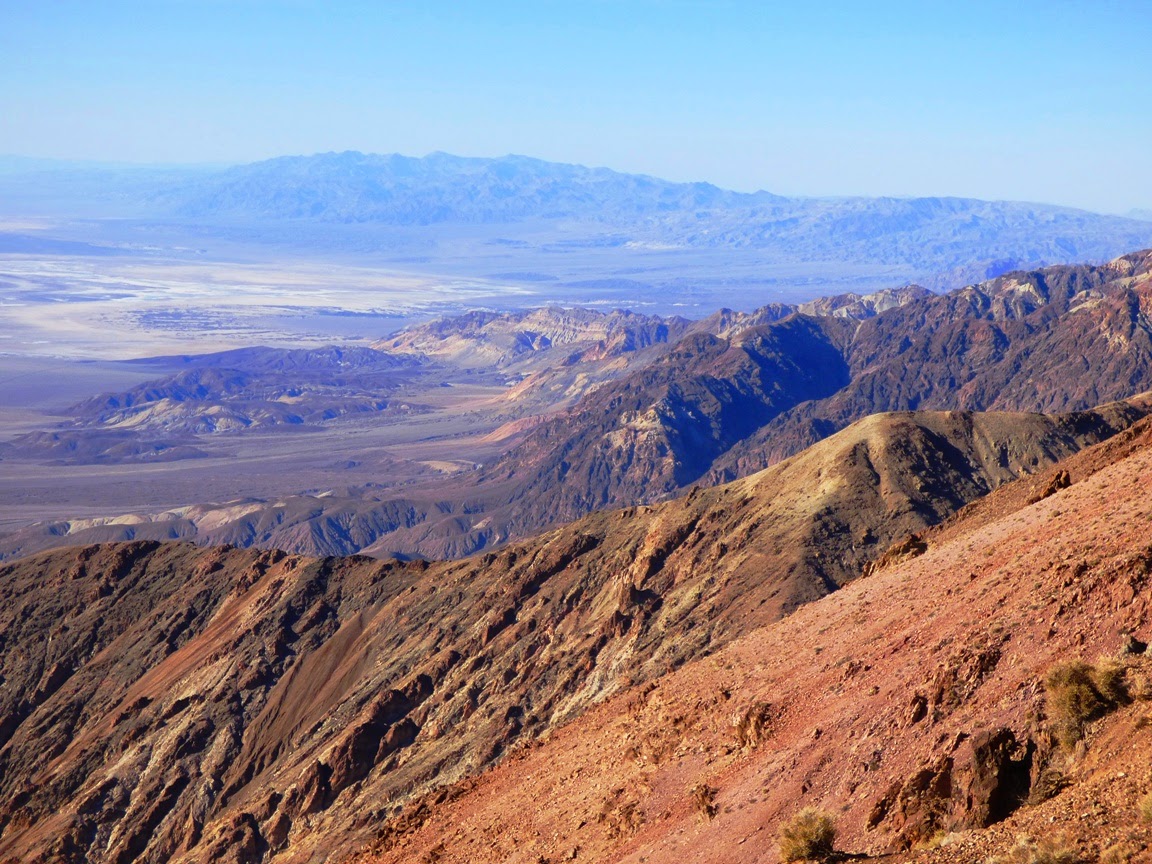 To the north (above), the Black Mountains include younger volcanic rocks dating from the middle and late Cenozoic era. They include the Artist Drive Formation, and the ancient lake and valley sediments of the Furnace Creek and Funeral formations. The Grapevine Mountains rise in the far distance. They are composed of thick sequences of marine sediments dating from the Paleozoic era. The farthest ranges are more than 60 miles away. 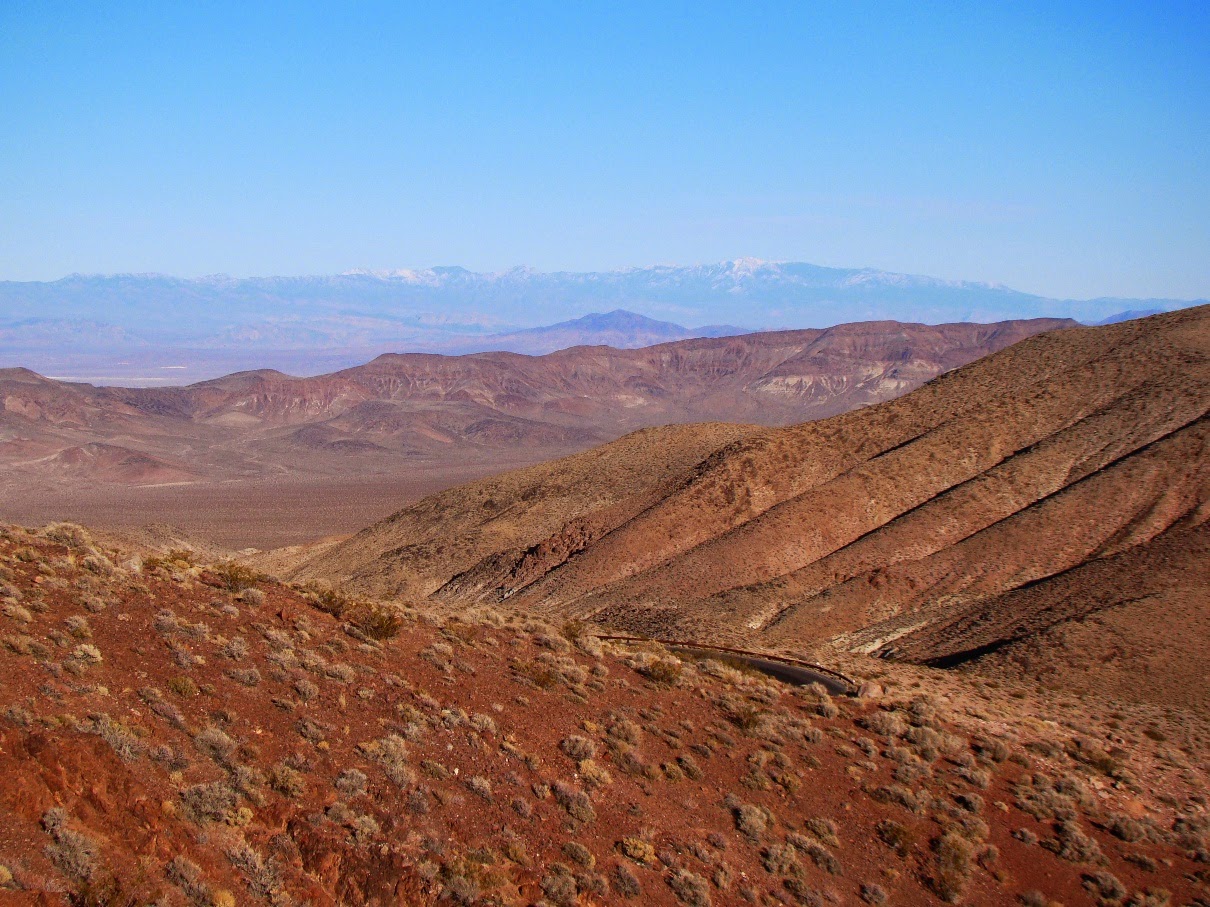 To the east (above), range after range culminates in the snow-covered Spring Mountains above Las Vegas (did you know you can ski near Las Vegas?). The highest peaks exceed 12,000 feet. Some of the water that accumulates on the slopes of the Spring Mountains travels underground through the intervening mountains to emerge as springs in Death Valley. 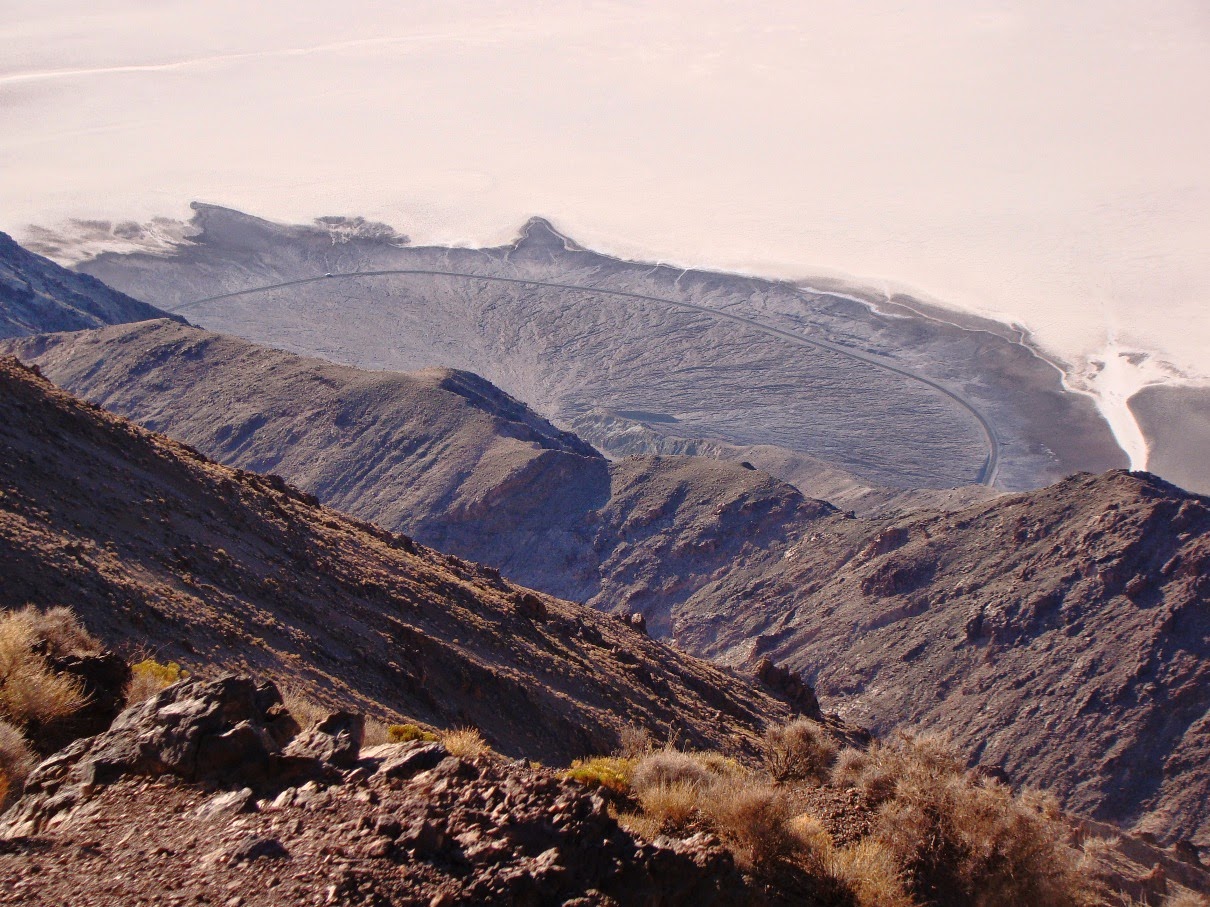 One of the most amazing things about the view from Dante's is how different it would have appeared 20,000 years ago during the last of the ice ages. Meltwater from the glaciers of the Sierra Nevada drained into the Great Basin, filling one valley after another until it spilled over into the Death Valley graben, forming a 600 foot deep lake more than 100 miles long.The lake left behind shorelines and terraces in what is currently the driest place in North America, and at least four species of native fish which still live in isolated springs around the park.

Water still accumulates in the Death Valley graben on occasion. Lakes were there in 2005 and 2010, but the same wet weather that filled the salt pan with water also wreaked havoc with the road to Dante's View and it was closed, so I have no pictures of the lake from above. This one from the valley floor will have to do. Some of my choices for the "ten most incredible places" involved lava, or fossils, or significant historical and geological events. I chose Dante's View for sheer grandeur. From the high vantage point of Dante's, one gets a sense of being on top of the world, a world that is sometimes an inferno, and certainly broken up. There are few places on Earth like it.
Posted by Garry Hayes at 1:38 AM

Mahogany Flat Campground north of Telescope Peak is another spot with an amazing viewpoint of Badwater Basin (on the west side of the valley). If you've got a vehicle that can make it up the rough road (high ground clearance required) you'll be treated to one of the best views ever. The night skies are incredible! I camped one night in September and there was only one other vehicle.