The Other California: Highway 108 and Donnell Vista - like Yosemite, only with Volcanoes! 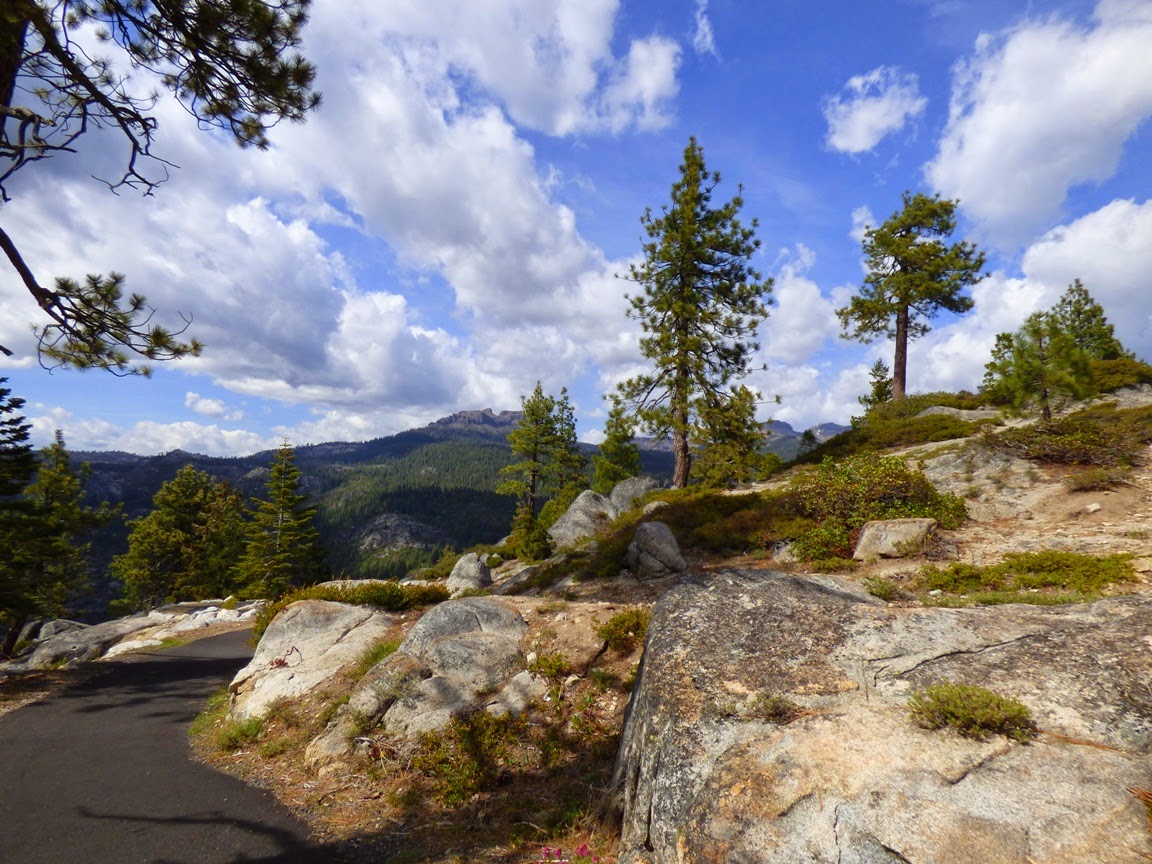 Those of you who've followed my blog over the years may remember that I produced a blog series called "The Other California" which existed long before any Toyota commercials with a similar slogan. I come back to it time and again when I find (or rediscover) those places that don't always show up on the tourist postcards, but which have incredible geology and are scenic to boot. 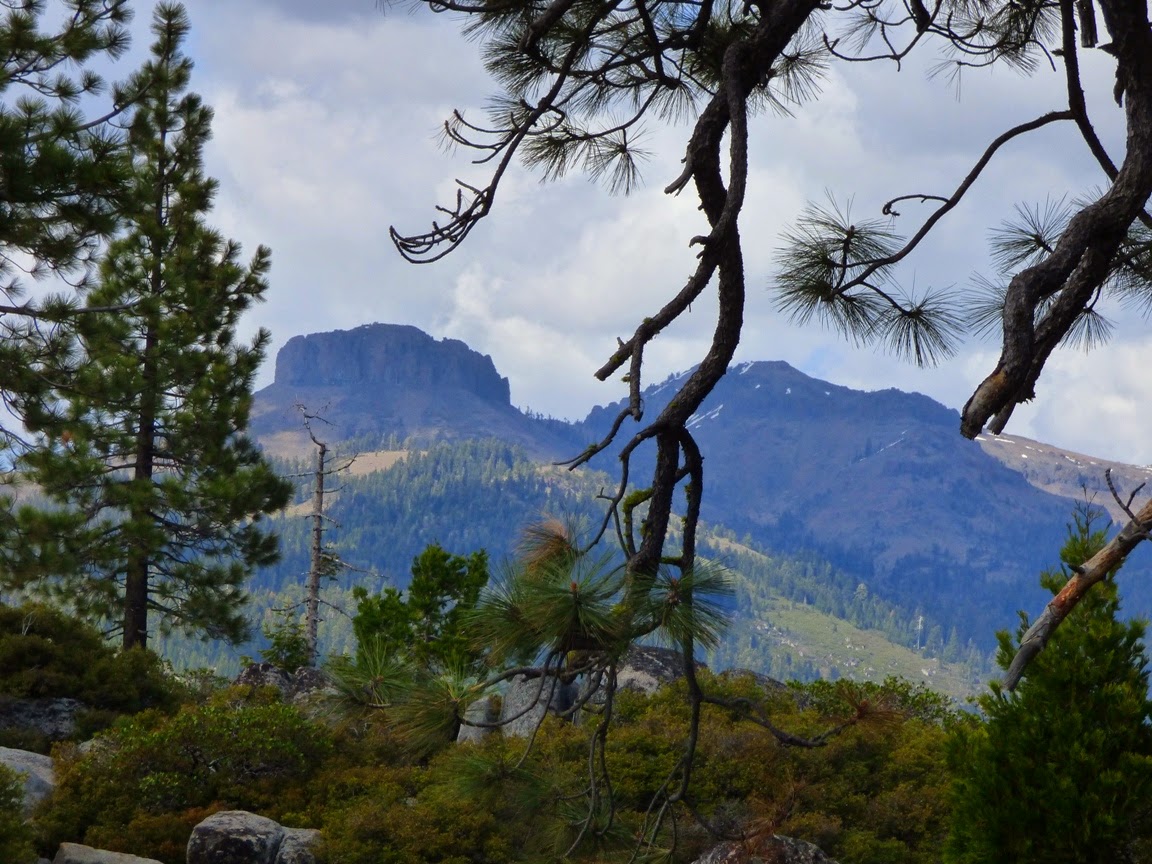 Today we are exploring a few corners of the Upper Stanislaus River drainage in the country north of Yosemite National Park. People from outside the region can be forgiven if they think that the Sierra Nevada is just Yosemite Valley, Sequoia National Park, and Lake Tahoe. The range is 400 miles long, and pretty much all of it is spectacular, except Yosemite and Sequoia are just a little more so. I cannot doubt that if Yosemite Valley didn't exist, the upper Stanislaus would have been one of California's national parks. In some ways, Sonora Pass and the upper Stanislaus are even more interesting in the geologic sense. The reason? Volcanoes. 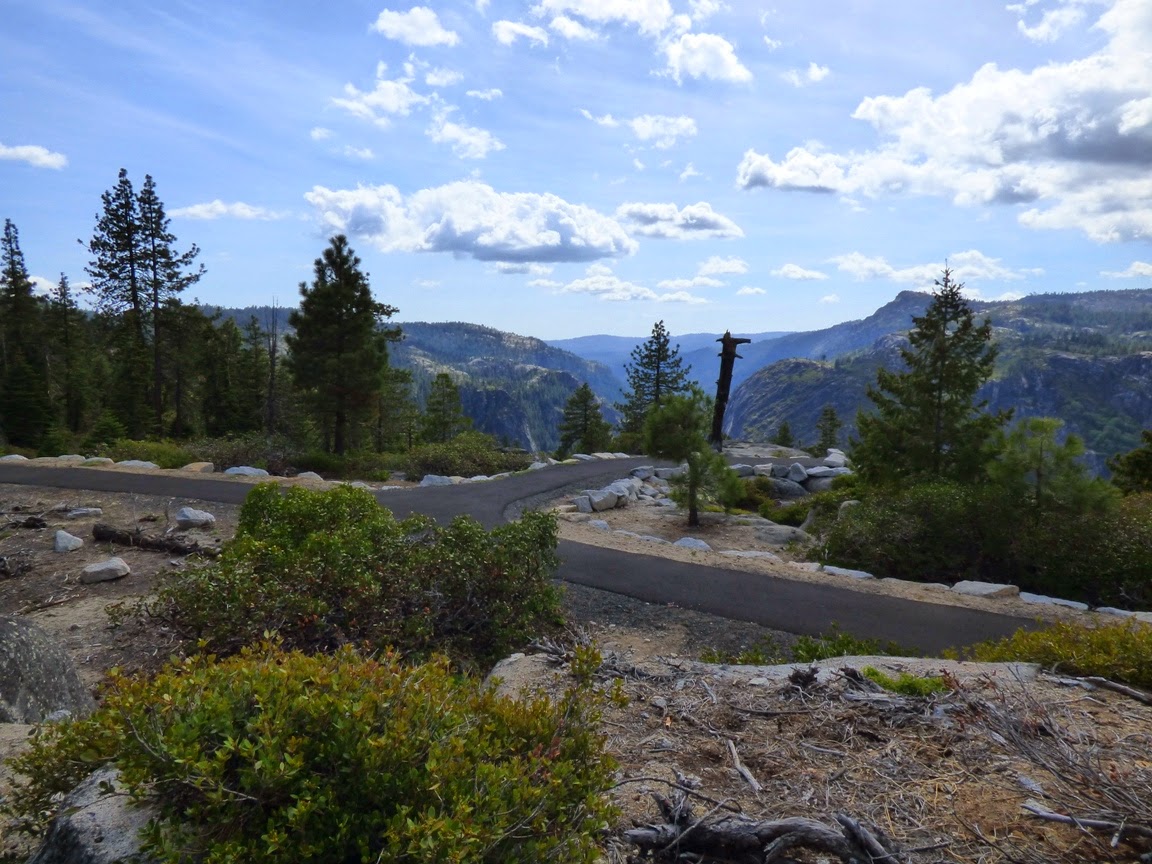 Donnell Vista Point on Highway 108 about 18 miles above Pinecrest Lake and Strawberry is the site of today's exploration. The parking lot and quarter-mile trail to the viewpoint were recently renovated with funds provided by the America Recovery and Reinvestment Act. The old worn-out trail was resurfaced, and a new ADA compliant trail winds along the western part of the slope, providing some new views to the west. 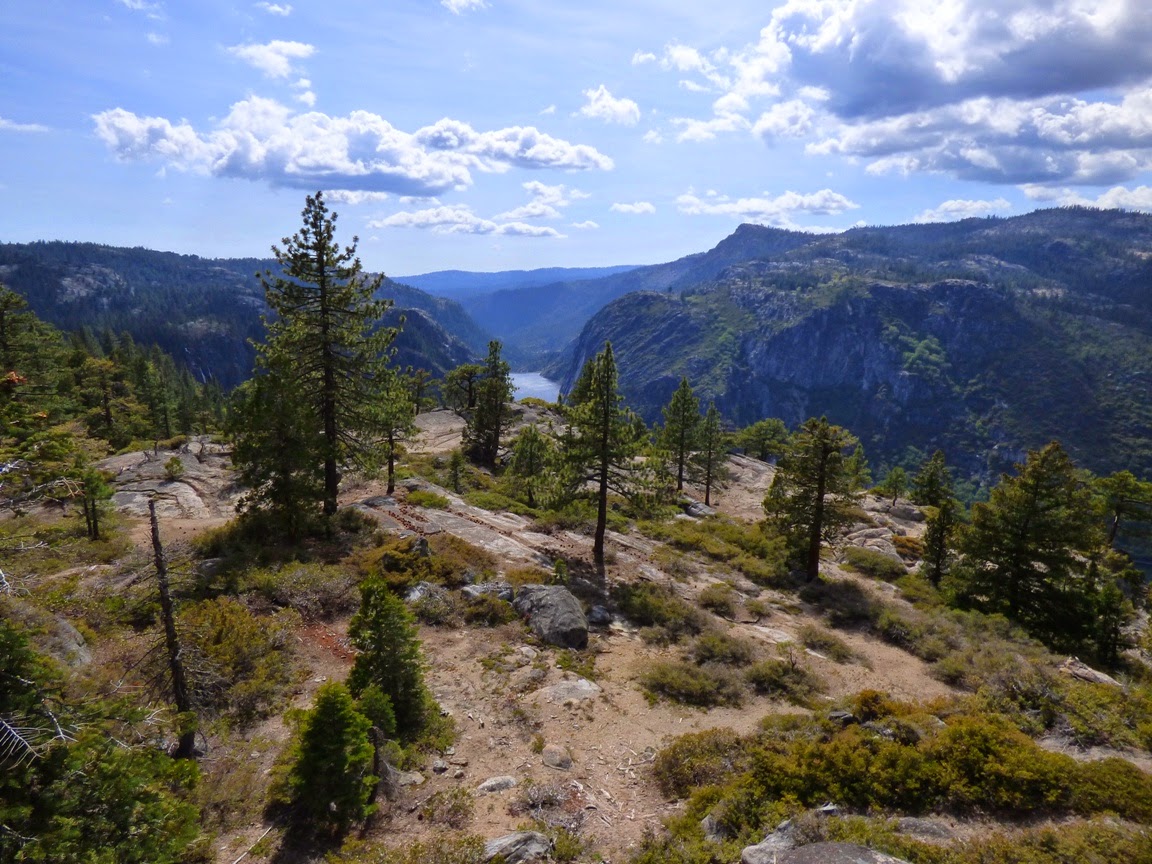 The first thing one notices from the overlook at Donnell Vista is the deep U-shaped canyon occupied by the lake behind Donnell Reservoir. During the Pleistocene Ice Ages, rivers of ice repeatedly scoured the gorge below, with the last glacial stage ending only about 12,000 years ago. The ice exposed the underlying granite, forming steep cliffs and numerous small rounded asymmetical domes called roches moutonnées. Some nice examples of glacial polish can be found in the region. 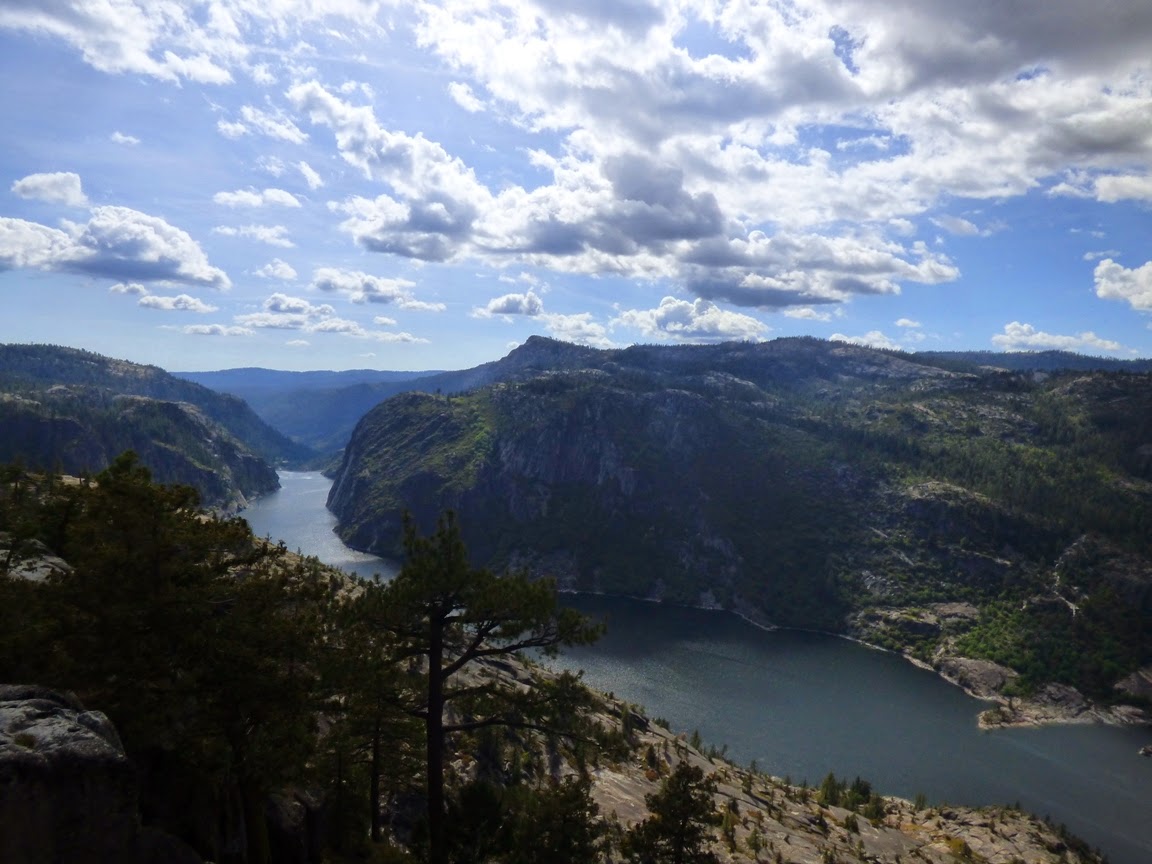 The ice in most places removed a cover of volcanic lava flows and any soils were stripped away as well. As a result, wide areas of granitic rock are exposed, and the forest grows only in fractures and joints where bits of soil can accumulate. 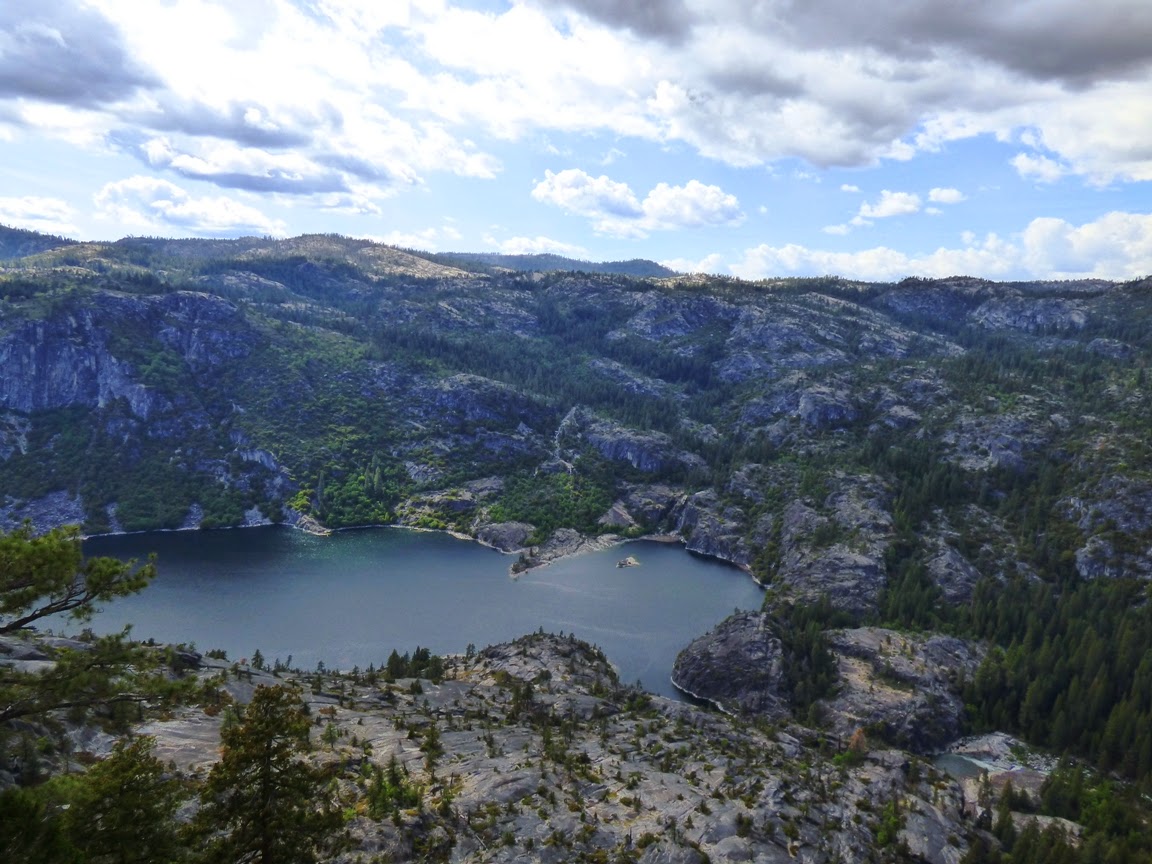 Glaciers also scour out basins where lakes can subsequently form, but the lake below the view point is clearly not natural. It is Donnell Reservoir, constructed in 1957 by the Oakdale-South San Joaquin Irrigation district for storage of water for agricultural irrigation and power generation. It stores a bit more than 60,000 acre-feet of water which today is only used to generate electrical power. Storage for irrigation now takes place downstream in the much larger (and more controversial) New Melones Reservoir.

The high peaks to the north and east of Donnell Vista preserve the evidence of the volcanic activity that took place here 10-12 million years ago. The few remnants not stripped away by the ice form the mesa-like peaks on the skyline. When the volcanoes were active, the region would have looked a great deal like the Mt. Lassen volcanic center, which remains active today. 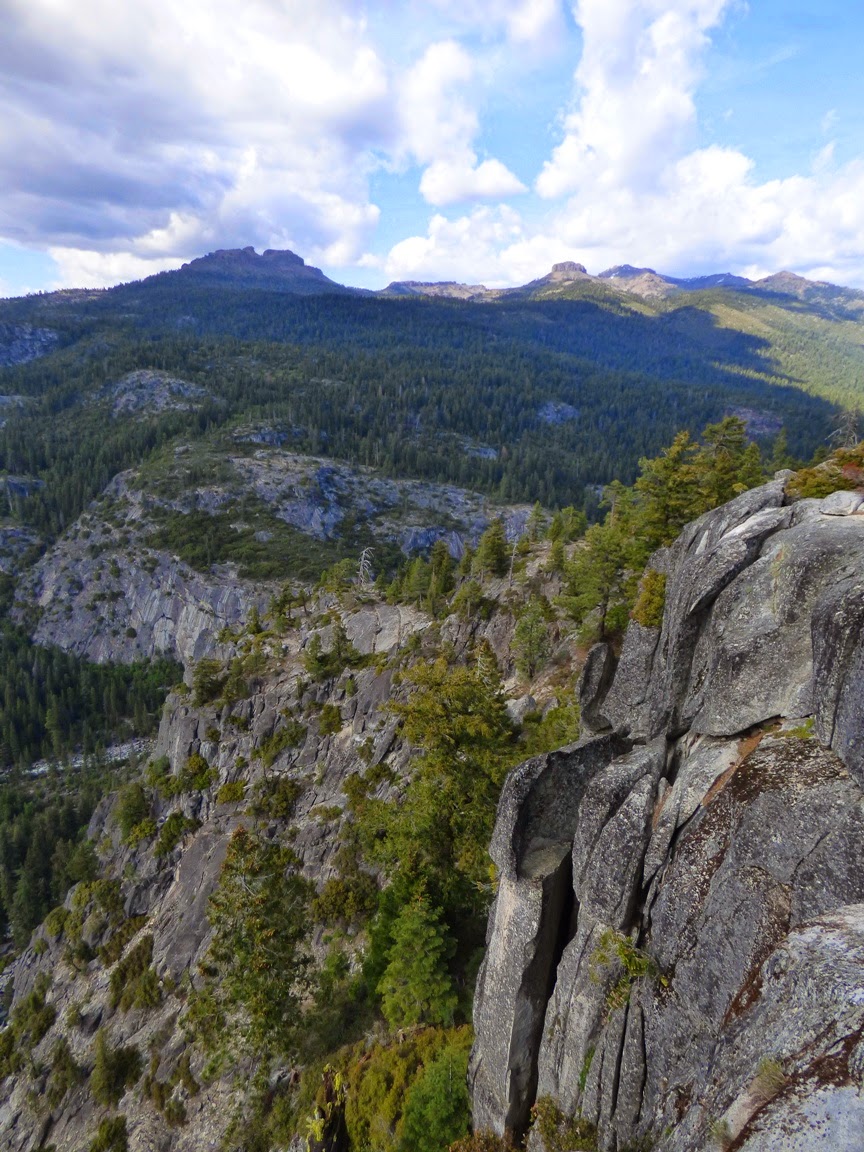 The lava flows filled a fault basin near the present-day Sierra Crest in the vicinity of Sonora Pass, and at times spilled over into the adjacent river valleys. One lava flow traveled nearly sixty miles to Knights Ferry in the Sierra foothills above Oakdale. The landscape surrounding the lava flow eroded away during the uplift of the Sierra Nevada block, leaving the lava flow as a prominent ridge called an inverted stream. 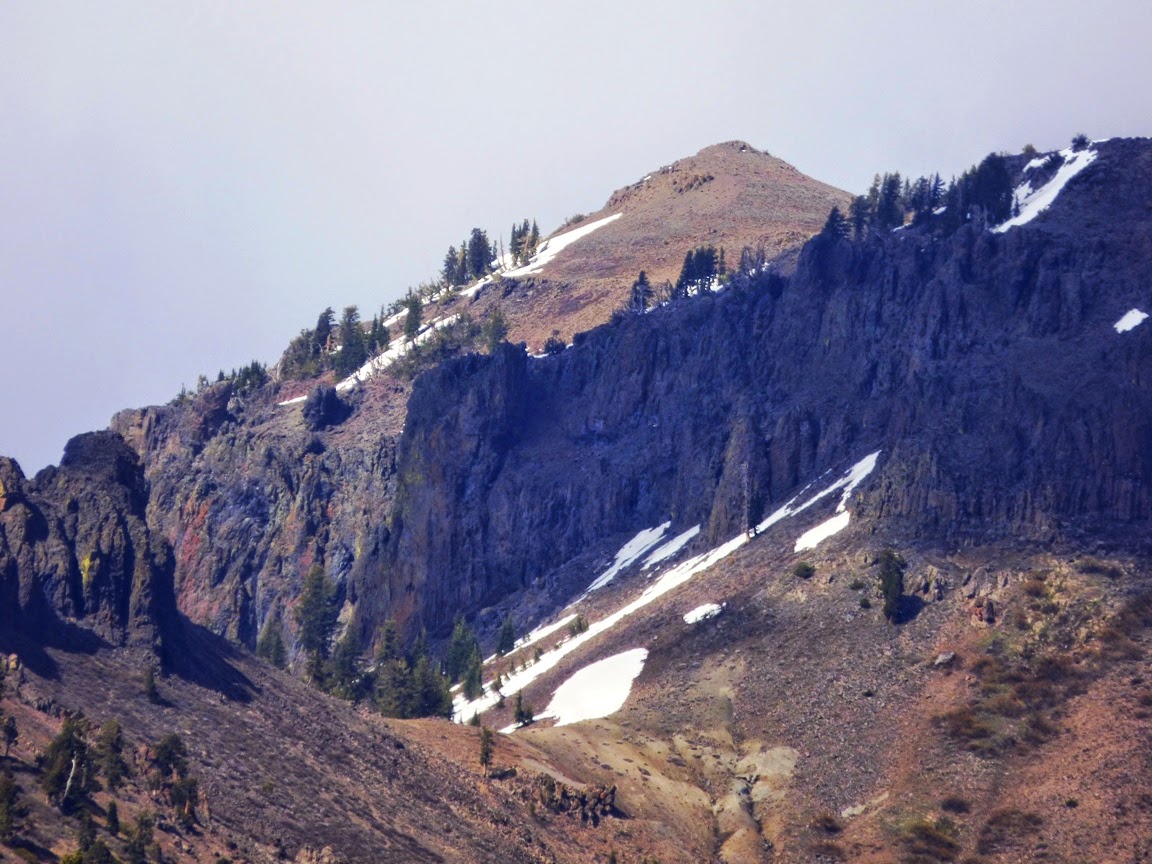 The upper drainage and headwaters of the Stanislaus River up to and over Sonora Pass offers up some fascinating geology. I helped edit a field guide of the geology of the region for a meeting of the National Association of Geoscience Teachers in 2012. It's for sale through Sunbelt Publications and the proceeds support scholarships for geology majors in California, Nevada and Hawaii. Get more information about the book here.

PS: Ron Schott has a great gigapan shot of the view from Donnell Vista at  http://www.gigapan.com/gigapans/114032

I drive hwy 108 fairly often (and my husband drives it every weekend that it's open!) but we haven't stopped at Donnell Vista since it reopened. It's clearly time for another visit.

Wow - this is fascinating! I'm poring over maps now, to see where exactly you are. Beautiful photos and geology descriptions. Thanks so much for sharing, Garry.