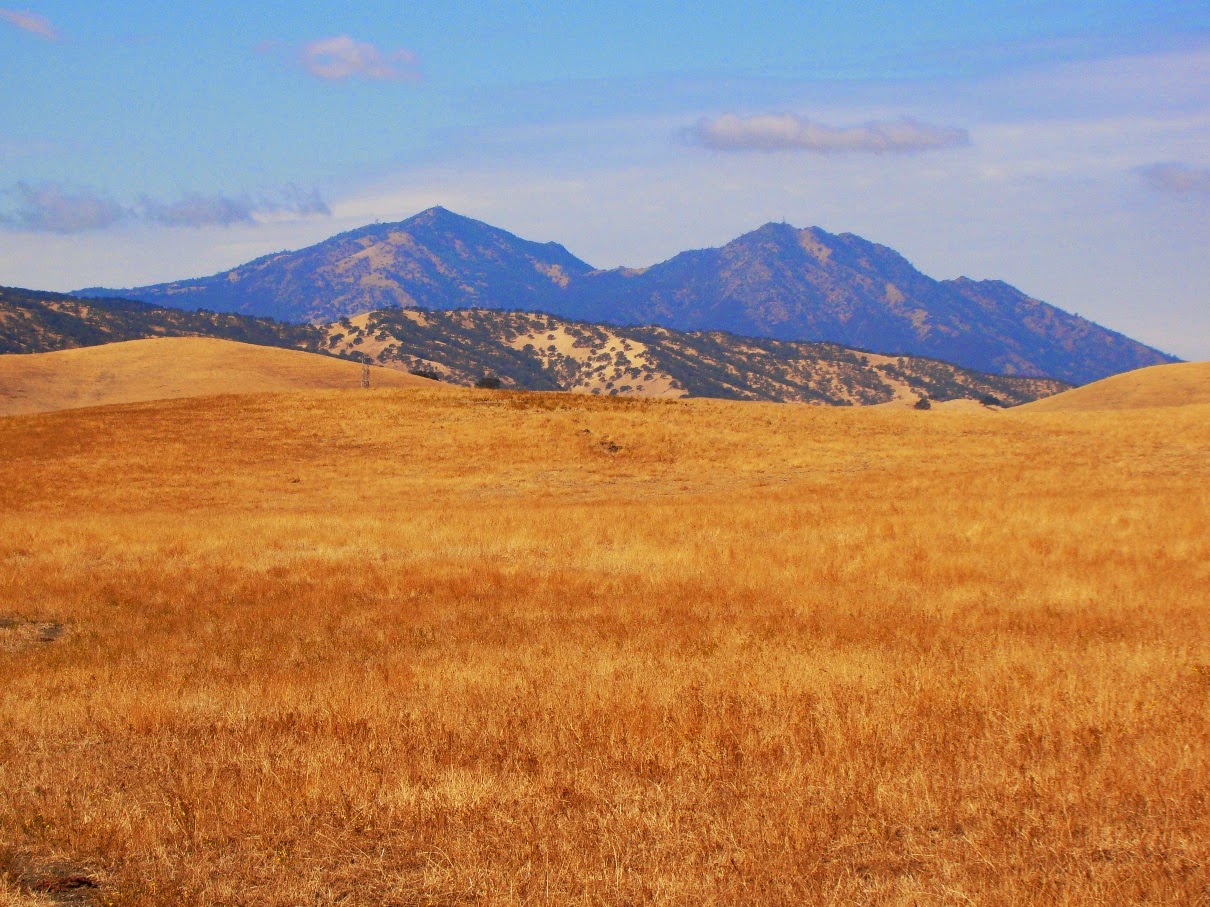 Mount Diablo looms over the Bay Area, rising 3,849 feet above the coastal plains. The two prominent peaks are miles from any other high mountains, and thus the mountain offers an incomparable view of central California, from Mt. Lassen in the far north to Mt. Dana and other high peaks of Yosemite National Park to the south. Sitting above the Carquinez Straits and the delta of the Sacramento River, it also offers unparalleled views of the Bay Area including the Golden Gate Bridge and the skyline of San Francisco (on non-foggy days). One minor surprise: if you actually stand on the true summit of Mount Diablo, you won't see any of the things mentioned above. It's inside a building (see the picture below).

The monument in the visitor center describes the use of the mountaintop as the initial point for all of survey lines for Central California and Nevada. Any property lines using the township and range system of measurements in the region are based on measurements from the summit that started in the 1850s. 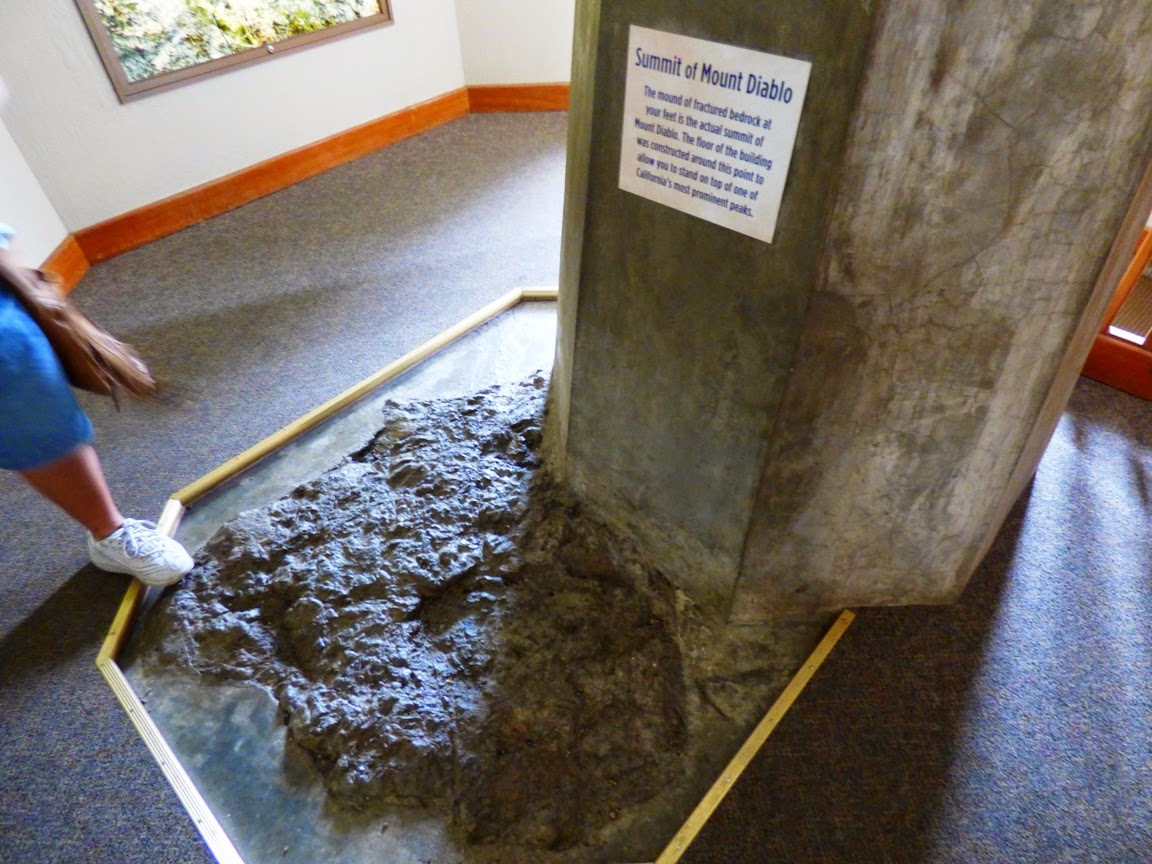 The most prevalent story of how the peak came to be called "Diablo" involves an effort by the Spanish to force members of the local Native Americans into servitude at the nearby missions. Some were hiding out in willow thickets that the Spanish called the Monte Diablo, the "devil's thicket", but the "monte" was later mistranslated as "montana".

Despite the mountain's distinctive shape, it is not volcano. Even though some of the rock making up the mountain is volcanic, it is basalt and related rocks that were once part of the ocean crust, and not something erupted from a terrestrial cone. The origin of the mountain can best be described as ocean floor crust and Franciscan trench deposits breaching the Earth's surface like (oh, geologist friends forgive me) some gigantic Godzilla character in a movie. Described more properly, the rocks from deep in the crust have been thrust upwards along active compressional faults. 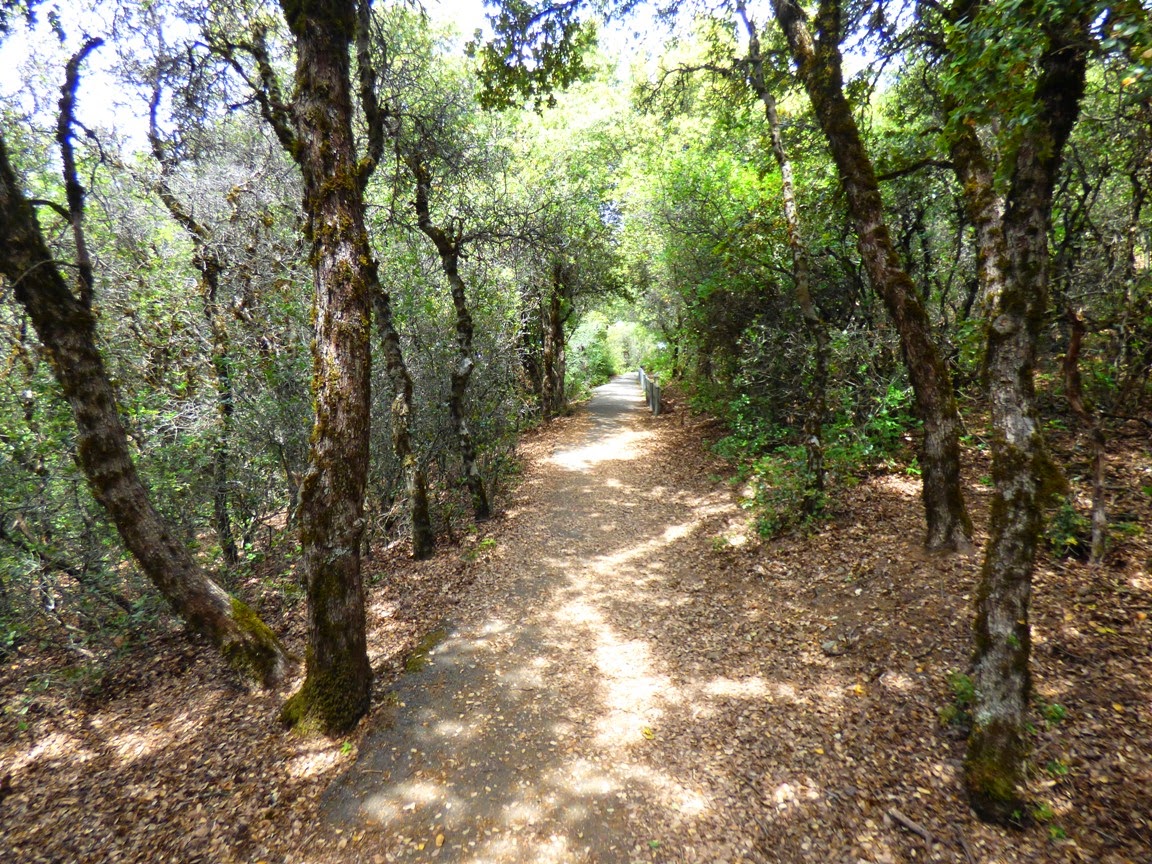 A rather narrow and exciting road climbs to the summit of Mt. Diablo, the centerpiece of Mt. Diablo State Park. The summit building contains a visitor center and store, and includes an observation deck. Trails lead out in several directions from the summit, but one, the Mary Bowerman Nature Trail, circles the summit in about 0.7 miles. 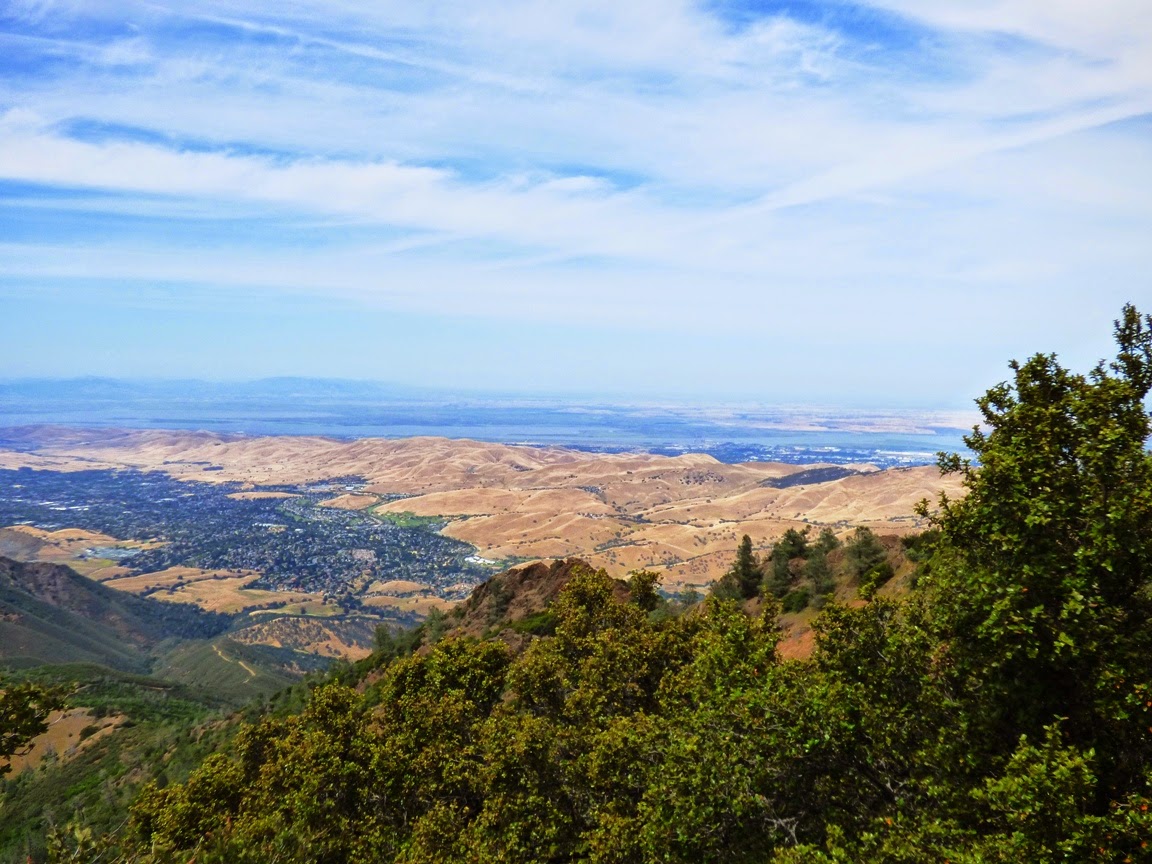 North from the summit, the hills drop away rapidly to the Sacramento River and Carquinez Straits, where about 60% of all of California's fresh water flows. 32 of the 35 islands in the delta have subsided to below sea level. They are protected by poorly designed levees that are a century or more old. If a moderate earthquake strikes on one of the nearby faults, liquefaction will cause widespread failure of the levees, and the delta will be flooded with salt water. The California Water Project will be shut down for many months while the delta is slowly flushed out. The implications for water deliveries to the San Joaquin Valley and Southern California are frightening. 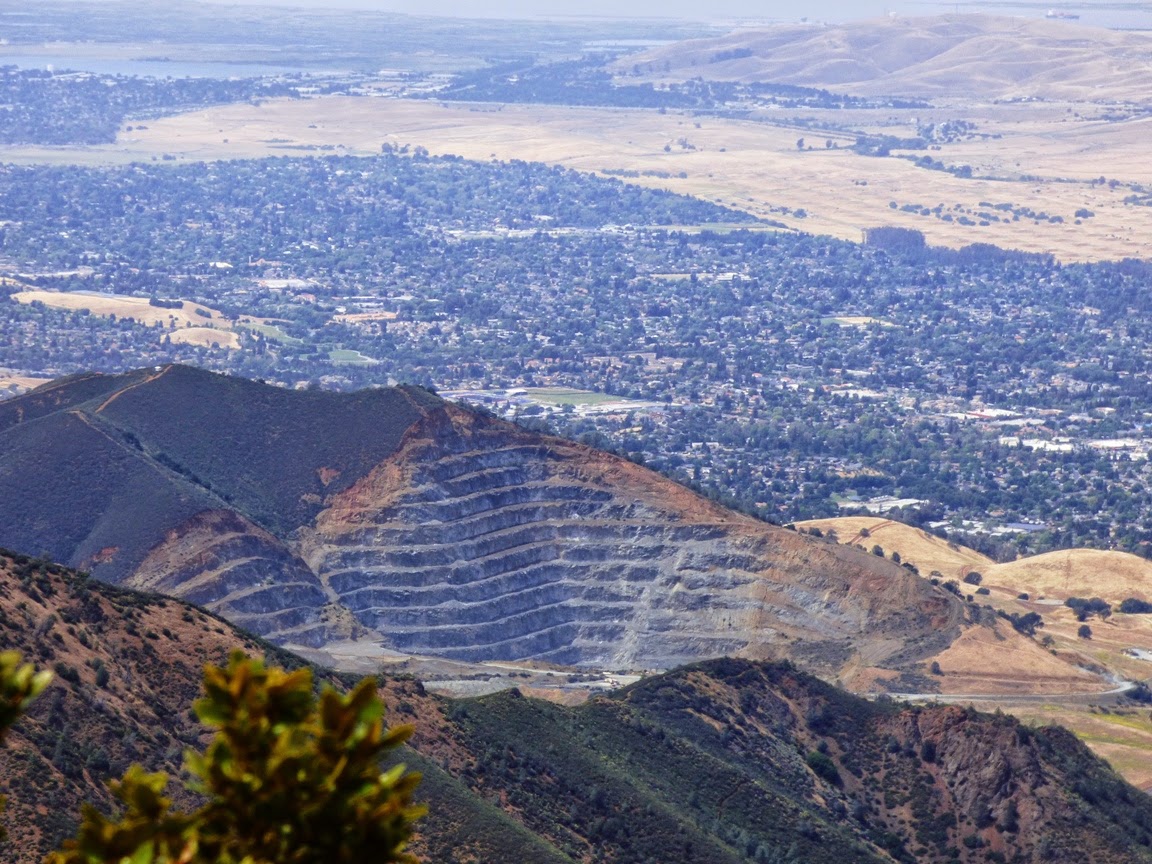 An odd sight is visible just to the north, the large open pit mine called the Mt. Zion quarry. The basaltic diabase is some of the oceanic crust mentioned earlier. It is a tough and stable rock, useful for breakwaters, road beds, and railroad lines. Note how the quarry lies on the ridge side opposite of the suburban developments of Clayton. Out of sight, out of mind... 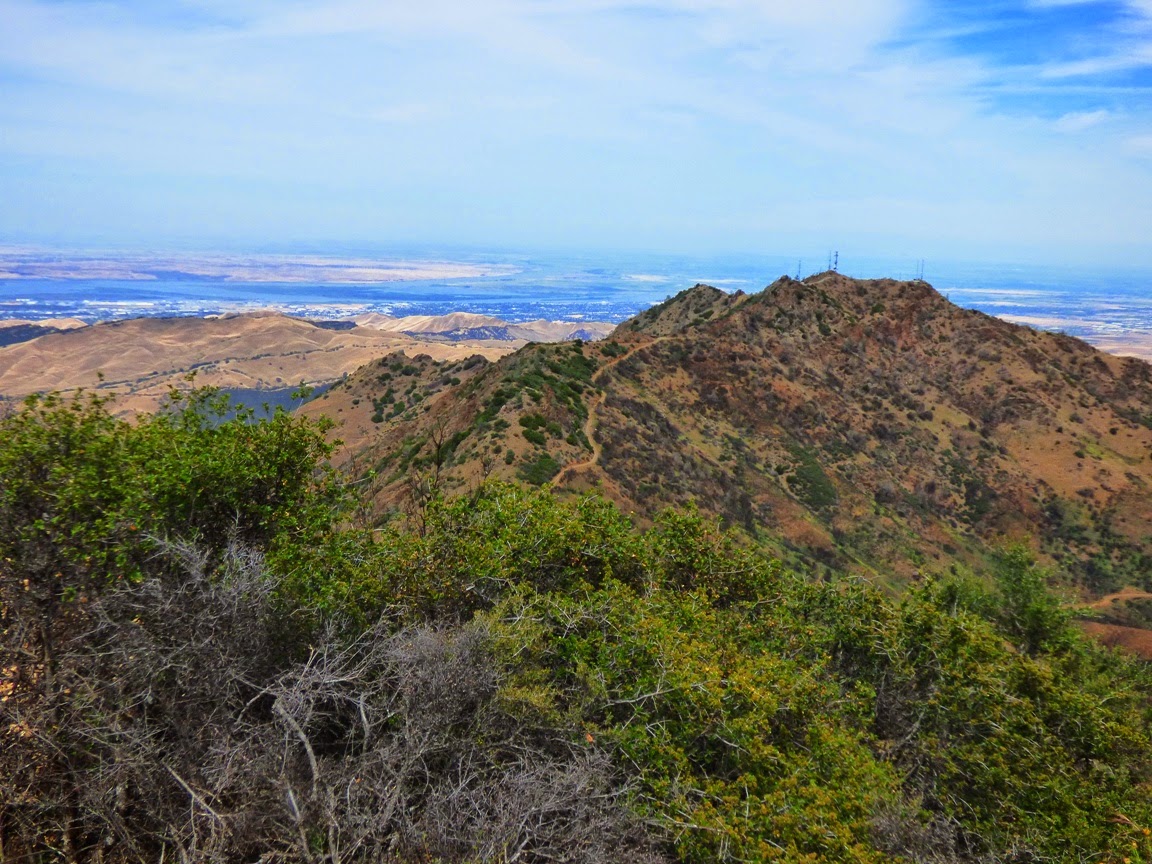 North Peak is about a mile northeast of the main summit, and only about 300 feet shorter. Like the main summit, it is composed primarily of rugged Franciscan chert. Chert develops on the deep ocean floor as myriads of one-celled creatures with silica shells sank to the bottom and became more compacted (diagenetic alteration). The rock was carried on the Pacific Plate for thousands of miles before being scraped off in the subduction zone along the western edge of North America. 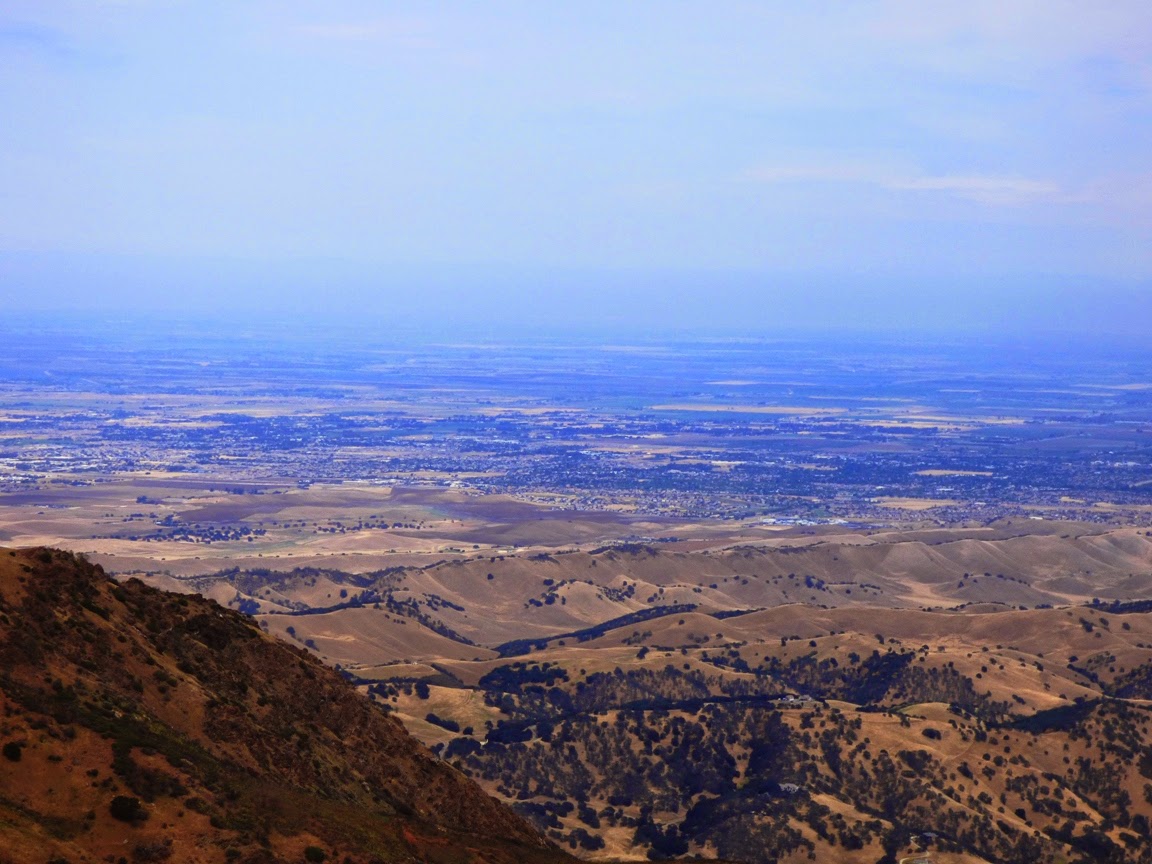 The view to the east and southeast reveals my home. It's flat. They grow lots of stuff there.

Actually though, the oak-covered ridges in the foreground reveal something of interest. The Great Valley is a deep trough with upwards of 25,000 feet of sedimentary layers dating back to the Mesozoic Era, the age of the dinosaurs. We would know little about them except that along the eastern Coast Ranges, the sediments have been curled upwards and exposed by erosion. The rocks surrounding the core of Mount Diablo are in fact called the Great Valley Group, and they contain a rich fossil record, including plesiosaurs, ichthyosaurs, mosasaurs, and even an occasional dinosaur bone. 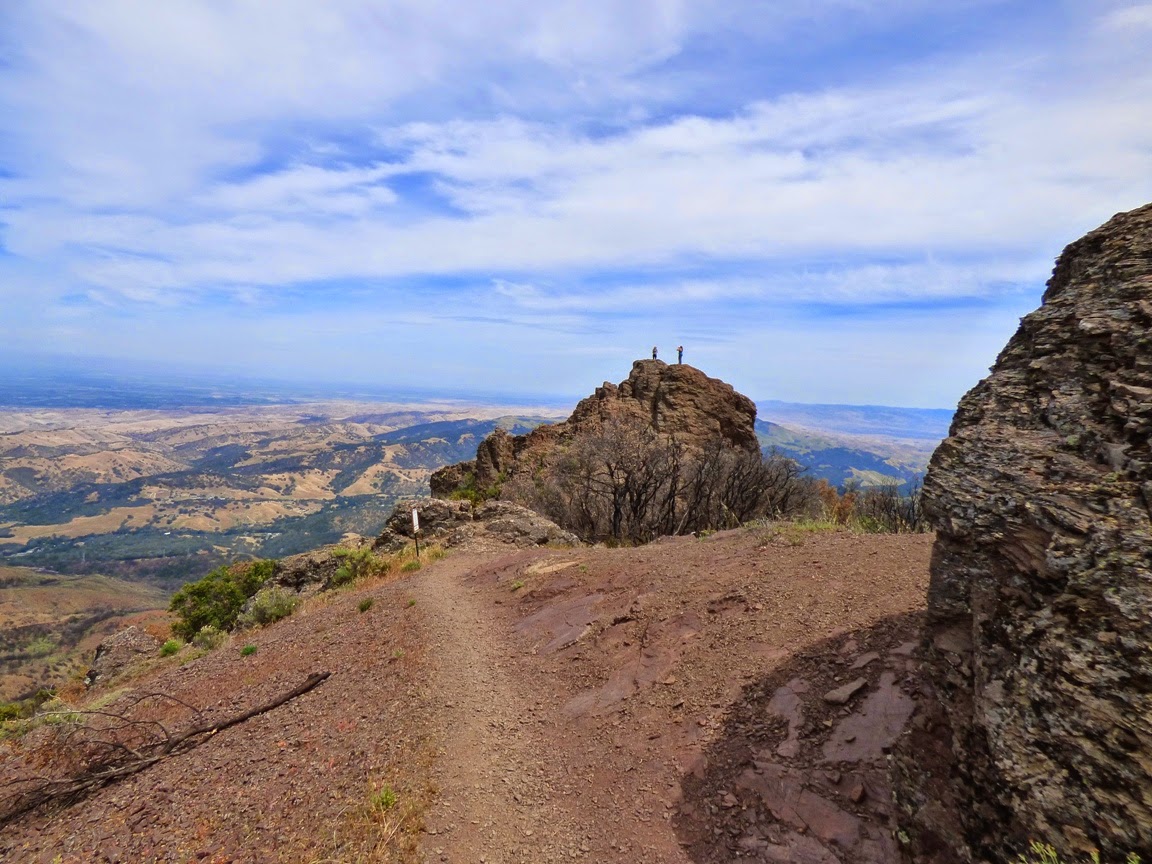 The easternmost section of the trail offers an excellent exposure of the Franciscan chert called the Devil's Pulpit. No one walking by was able to resist the temptation to climb it, including me! 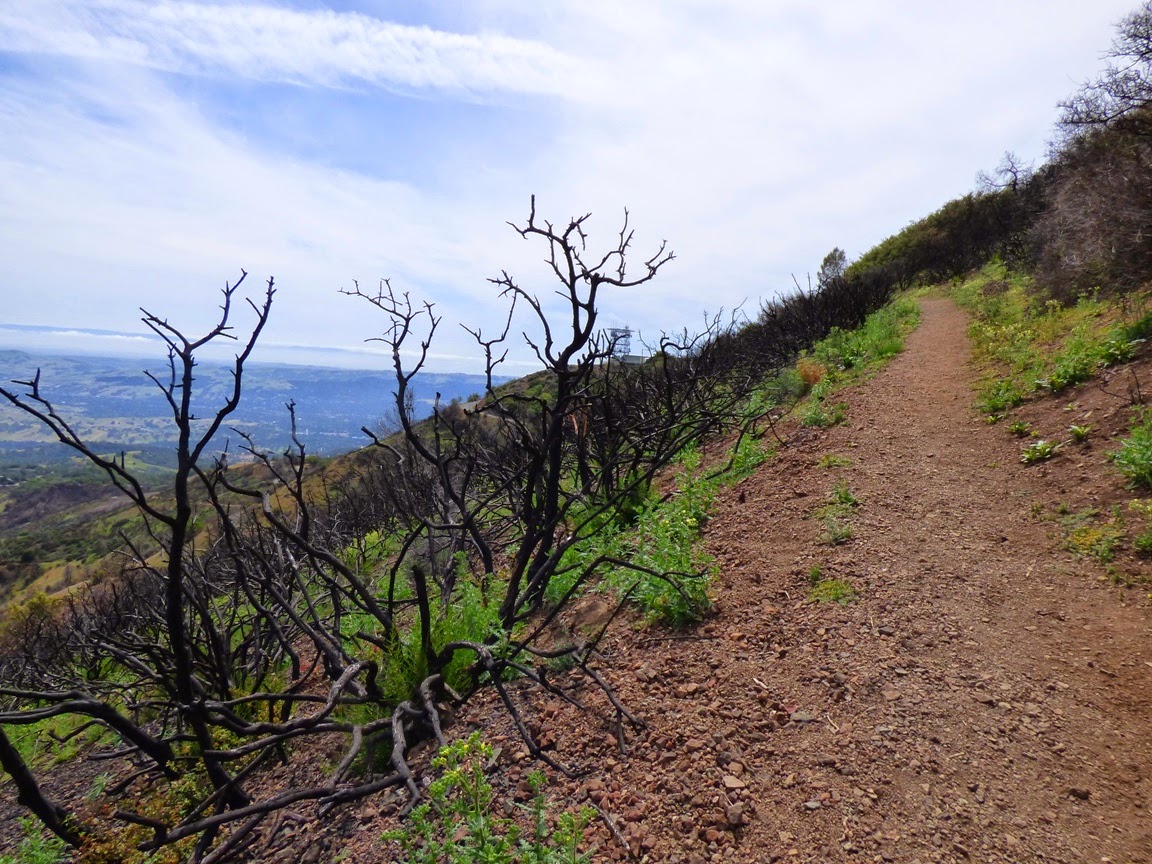 The southern flank of Mount Diablo was burned last September. With the horrific drought, regrowth of vegetation has been limited, but there were lots of interesting flower species. The views included the Livermore Valley and the South Bay. A short distance later, I reached the end of the trail and we headed down the mountain. We made one more stop, at the very cool sounding Rock City. 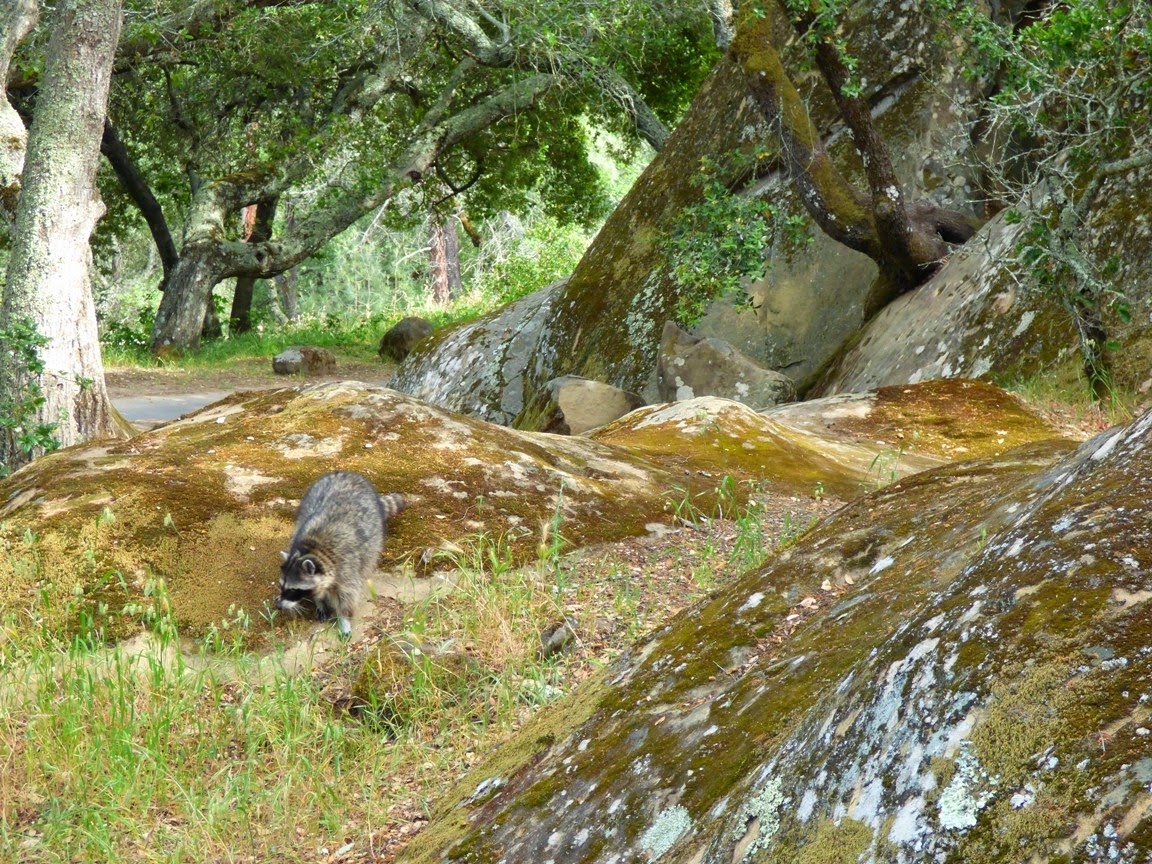 After visiting with the resident raccoon, we set out to explore the bizarre rock exposures. We were looking at the Domengine Sandstone, a coastal estuary deposit that included extremely pure quartz sandstone and low grade coal called lignite. Earlier in the day we had explored one of the coal mines at the Black Diamond Mines Regional Preserve. 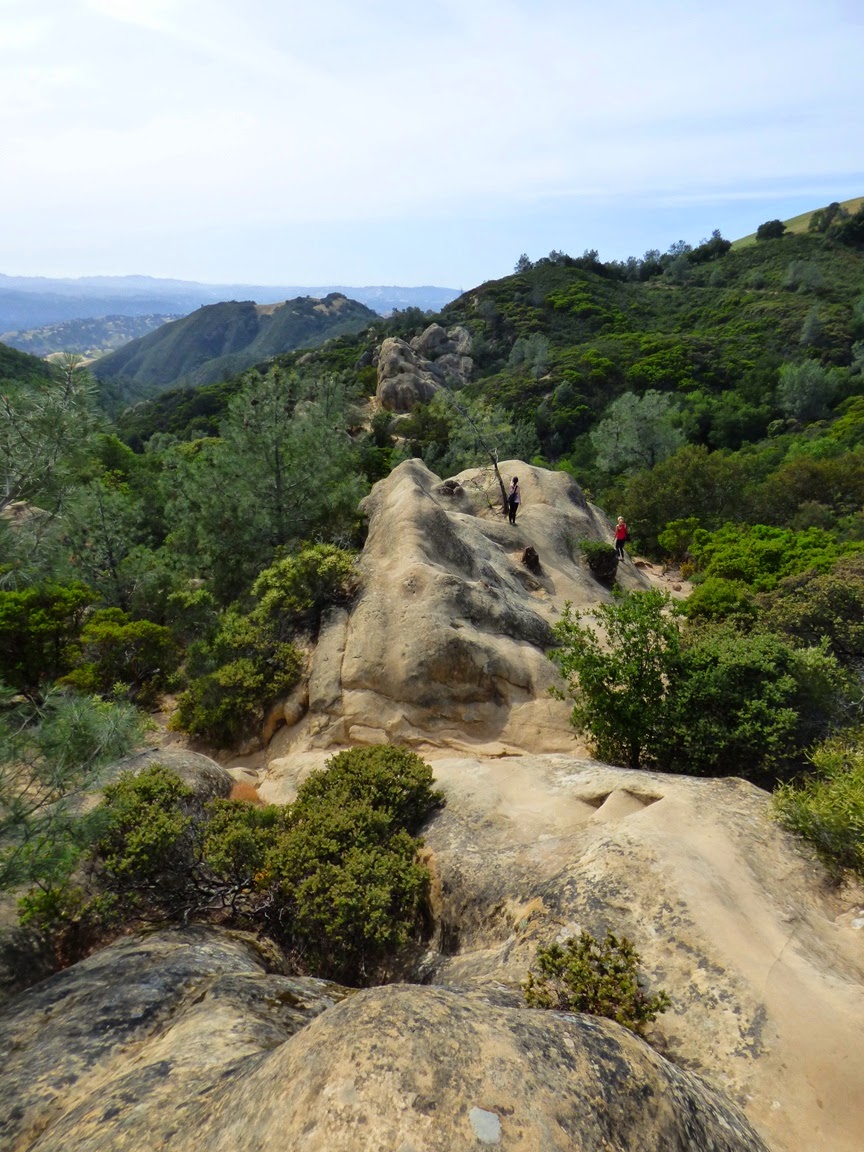 We made our way through a warren of criss-crossing trails and followed a sandstone ridge to Sentinel Rock. It is an eerie landscape, but it's also a lot of fun to explore. 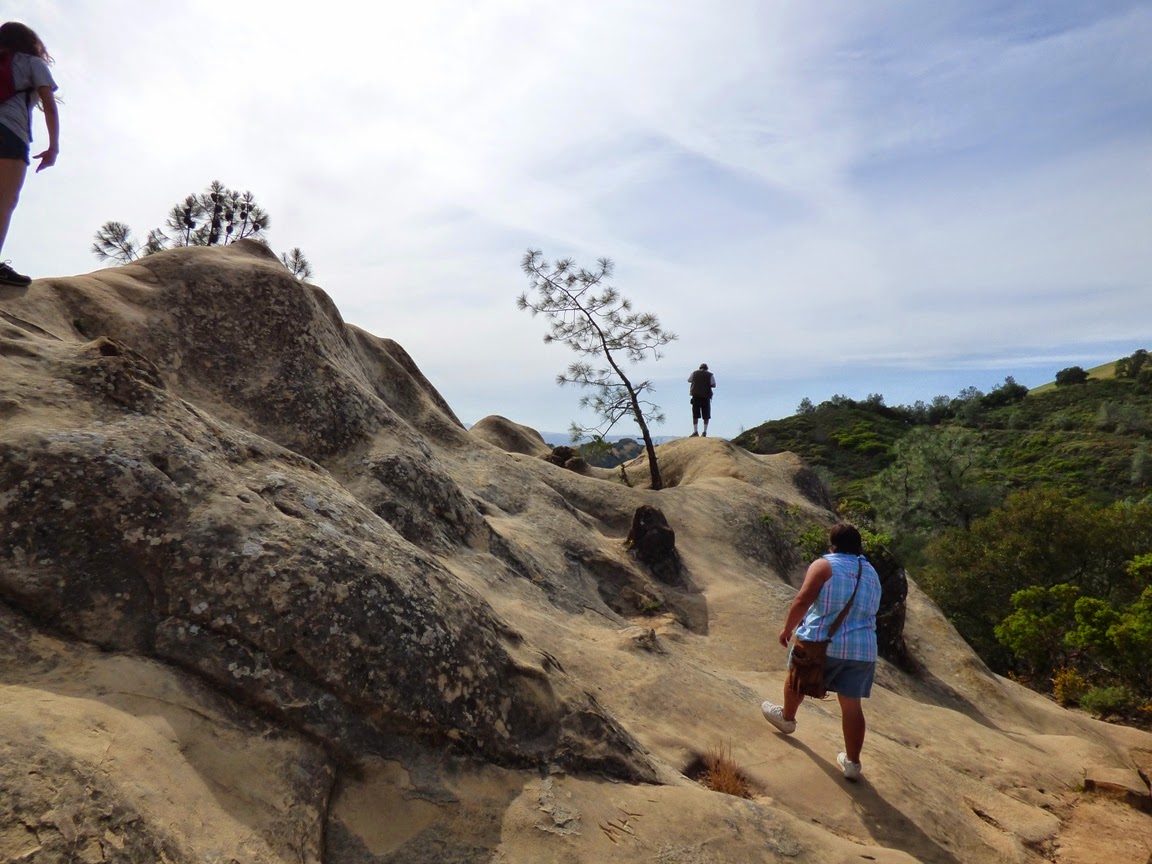 Knowing that Sentinel Rock would be an irresistible but dangerous climb, the park administration installed cables and carved out steps. 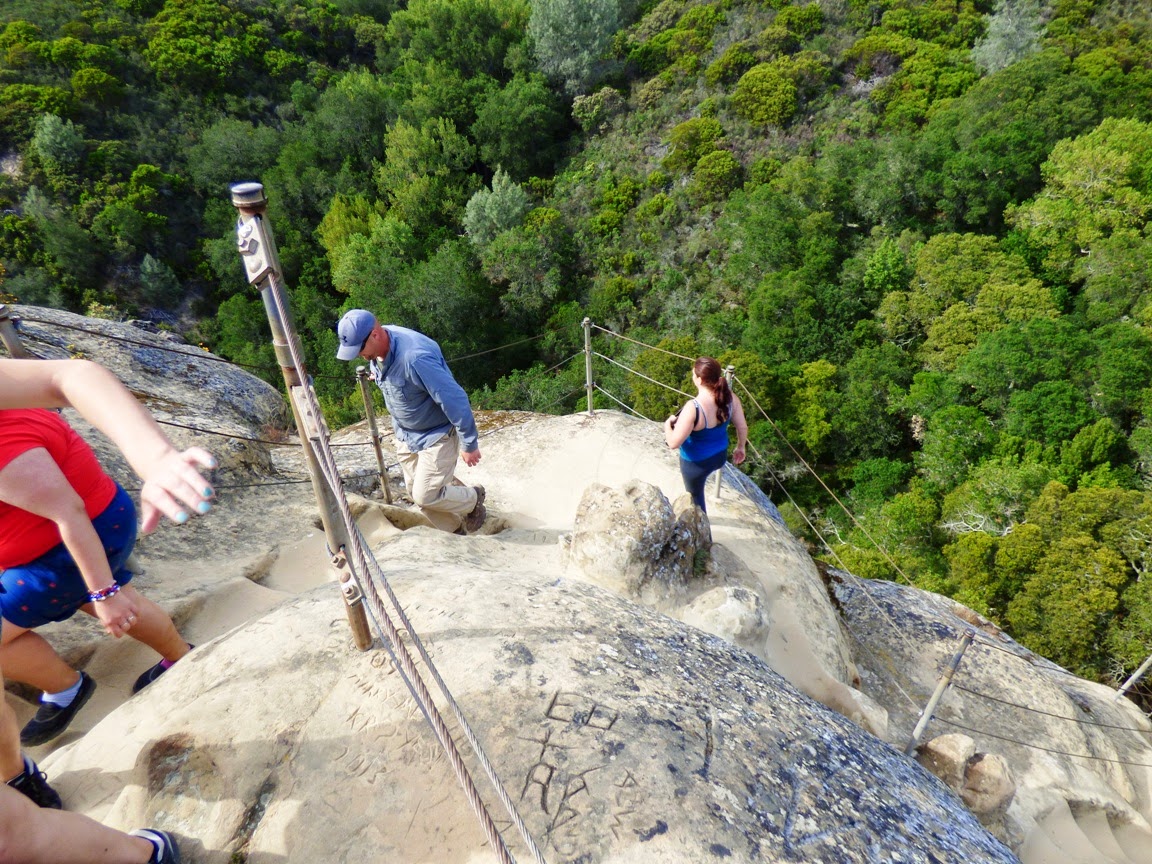 Mt. Diablo State Park is an absolutely fascinating and beautiful island of wilderness in the midst of the Bay Area. It is a great place to visit, and a marvelous geological wonderland. If you are ever in the region, check it out!
Posted by Garry Hayes at 12:30 AM

Wonderful photos and explanations, once again, Garry. Thank you so much. Our north shore mountains - literally just across the harbour in Vancouver BC - are from 4,039 ft up to 5,426 ft. Now those definitely loom over our city. But they're not as interesting geologically-speaking as the ones you're describing! Cheers.