Where are the Ten Most Incredible Places You've Ever Stood? My Number 4: What is it like to be the first person ever to see a cavern? 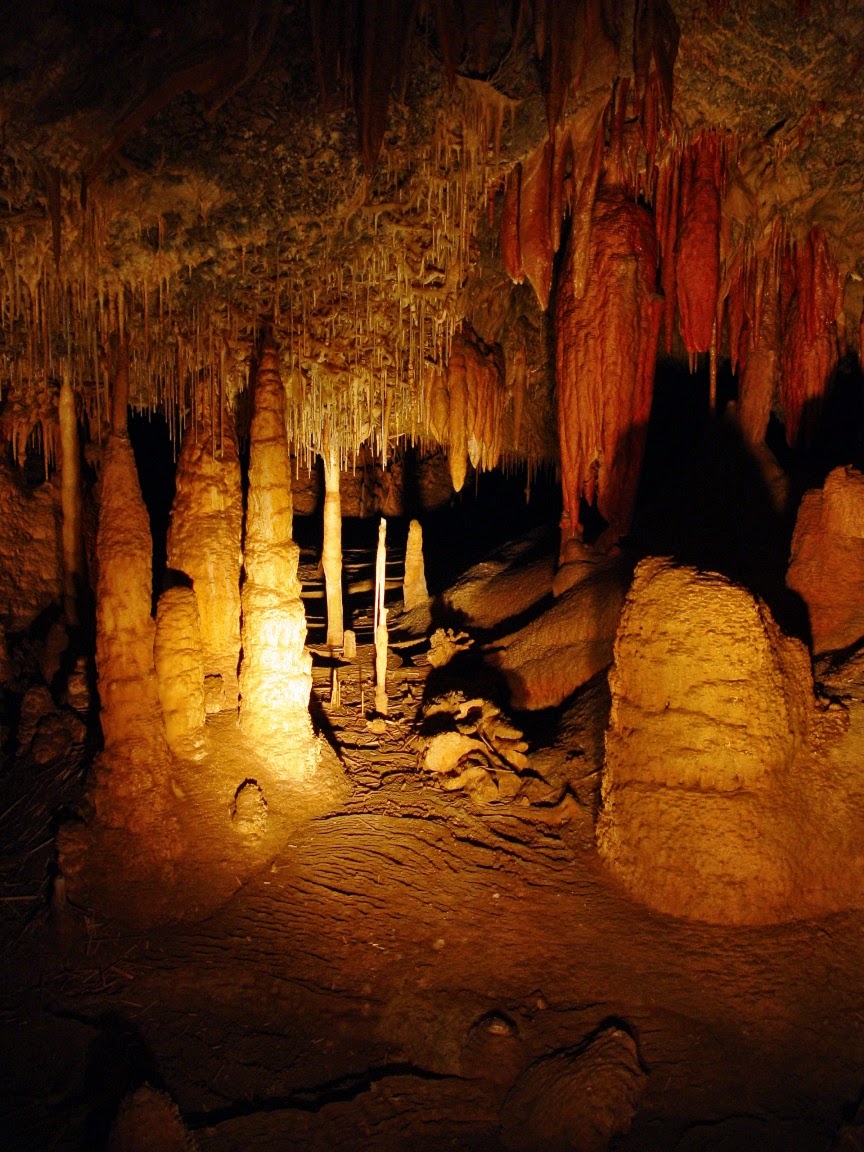 Can you imagine flashing a light in a dark corner of a cavern, knowing that you are the first human being ever to lay eyes on the formations? I haven't had that privilege in my life, but I have found two or three places where I can imagine what the experience was like. Most of the caverns that are accessible to amateur spelunkers like myself have been long known and rather completely explored. Unfortunately, most of them have been severely vandalized, and the early use of torches for light left soot deposits on the formations. It is a rare treasure to see a cave where damage has not yet happened. Such caves in my experience include California Caverns near San Andreas, California,  Black Chasm Cavern near Jackson, California, and the subject of today's post, Kartchner Caverns near Benson, Arizona.

The "Ten Most Incredible Places I've Ever Stood" series has been a series of hard choices. This one made the list because of the shock and the awe, the way the cavern made my jaw drop as I stepped in. It is an experience unlike any other that I've had while underground. There is a difference between even a well-protected cave, and one in which whole areas have never been touched by a human being. The floor of one of the large rooms was covered with mud, and it was clear from the trackway above that only one trail through it was ever made, in order to put in a light source. The rest of the room remains as it was discovered.

The discovery and visitation of any cave causes irreversible changes. Kartchner Caverns were discovered on private lands in 1974 and the people who found them were concerned about preserving the original cave environment. The cave was at nearly 100% humidity, and opening it to the desert environment would have dried it out. Such changes in humidity can adversely affect life in the cave and stunt the growth and development of speleothems (cave decorations like stalactites and stalagmites). And yet the caves were spectacular. Was there some way of preserving the caves while making them accessible to the public? 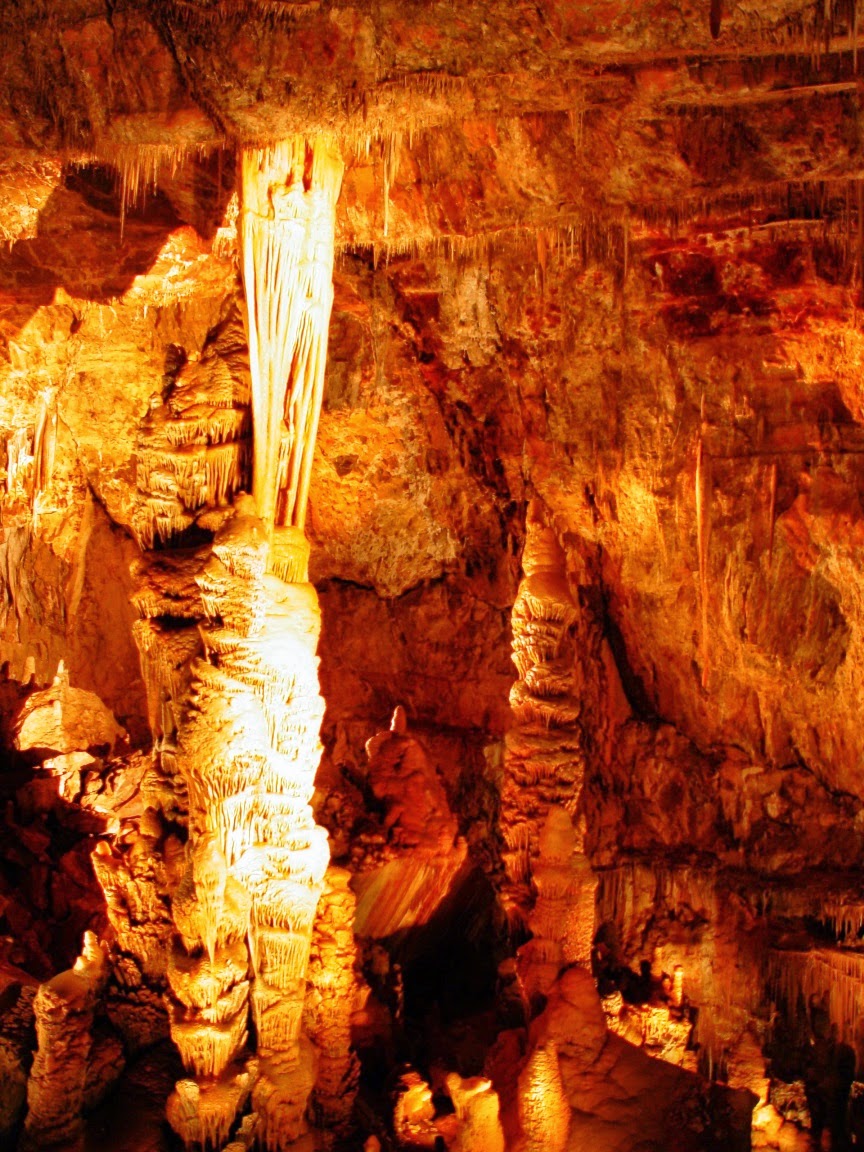 The discoverers hit on an audacious solution. Through a series of delicate and secret negotiations, the owners of the land agreed to sell the lands containing the cave to the state of Arizona to be developed as a show cave, but to be developed in such a way as to preserve both the features and the climate inside the cave (many of the legislators didn't know what or where the park was when they voted for it). They preserved the humidity of the cave using a series of unique airlocks. Pathways were constructed with a minimum of disruptions to the original configuration of the cave. It took 25 years from the time of discovery to the opening of the park to the public in 1999. 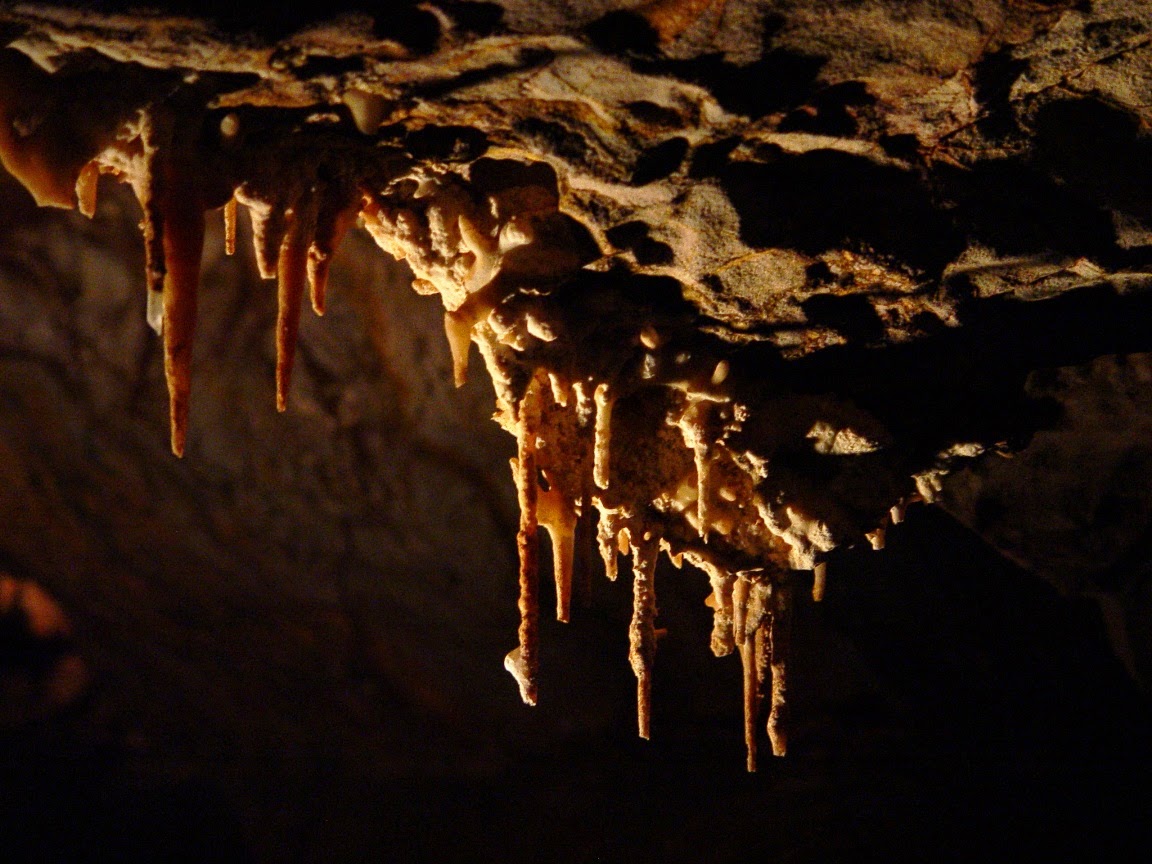 There was one catch. Nothing goes into the cave with the visitors. No food, no water, no backpacks...and no cameras. As you might expect, I live for photography and this for me was a hard restriction. In 2005, though, I got the opportunity of a lifetime: as part of a fund-raiser for the park's foundation, they had a photography day, and the National Association of Geoscience Teachers made arrangements for us to take part. I was going to be given access to the cavern to photograph to my heart's content. To be sure, I had to sign a waiver of commercial rights, and the images that you see in this post today are protected and cannot be sold or used in any way.
What a wonder it was to step into a cave that appeared the same as it was on the day of discovery! The airlock closed behind me and although the temperature was only 78 degrees, it felt much hotter because of the intense humidity. The passageways were dimly lit and it took some time to develop my night vision. But moment by moment the cavern came into focus. It was simply stunning. 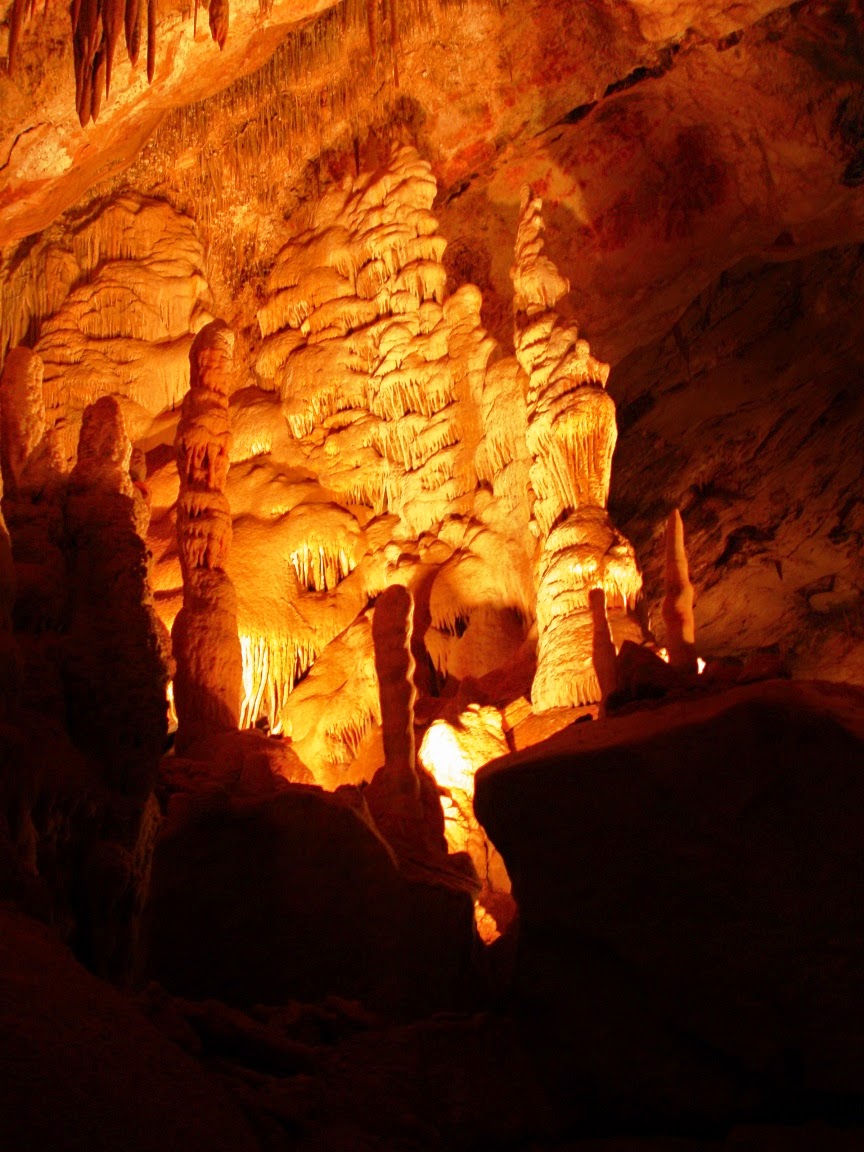 I wandered from passage to passage lost in the moment. It was nice not having a guide (staff were stationed throughout the cave to answer questions and keep an eye on things), but it was also nice to be exploring a pristine cave knowing I wasn't doing major damage just by being there. Exploring a newly discovered cave means leaving muddy footprints and accidentally destroying delicate formations underfoot, or leaving trails in the mud. I remember thinking that the experience was something like being in a museum, but I thought that in a good way: the resource was being protected, and yet hundreds of thousands of people could see and enjoy it.
Although I can't be mistaken for a professional photographer, I learned long ago that photography in a cave is always tricky. There is no "natural" look to a cave except total darkness, but a camera flash steals perspective and washes out delicate differences in color and shading. I used the ambient lighting to maintain some depth to the photos. That meant standing very still for longer than usual exposure times (tripods weren't allowed at the time). 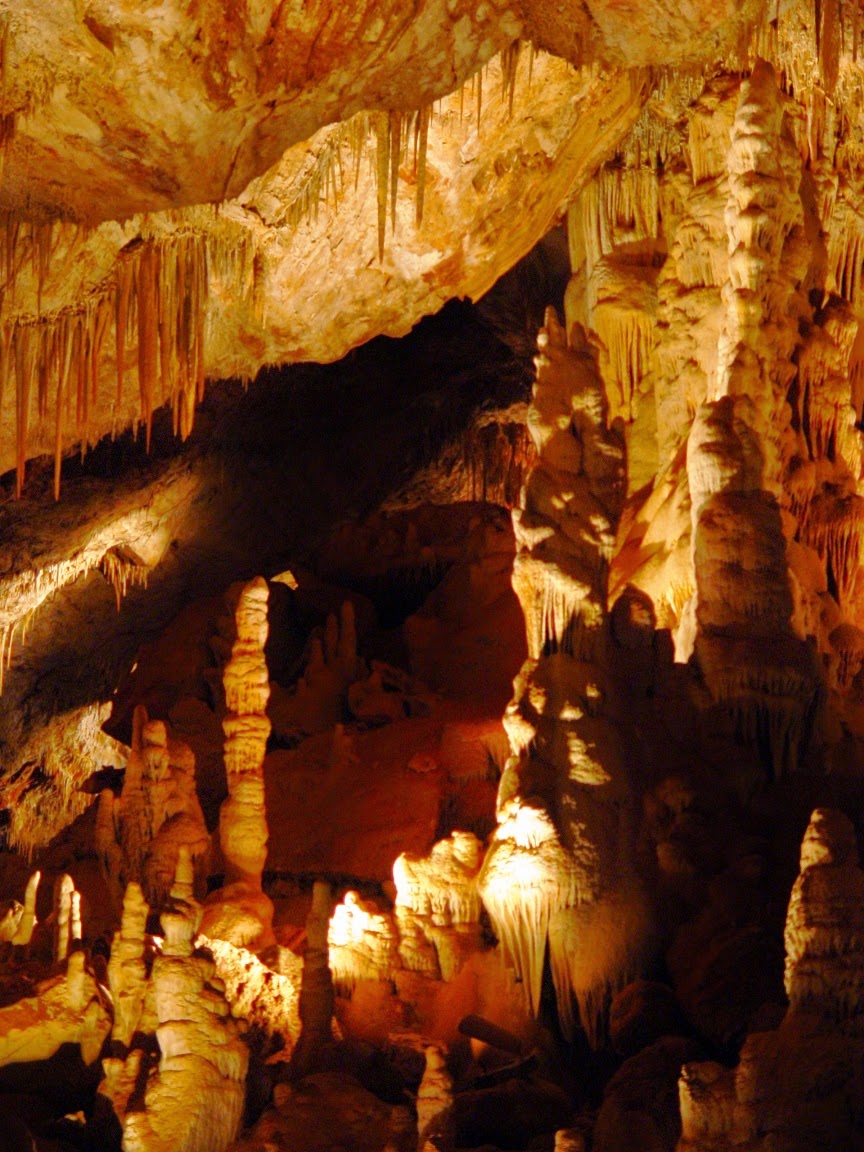 Flowstone refers to speleothems that result from water seeping out of cracks in the walls of a cavern. Over time gigantic mounds build up that resemble ice cream sundaes. Kartchner is full of spectacular examples. 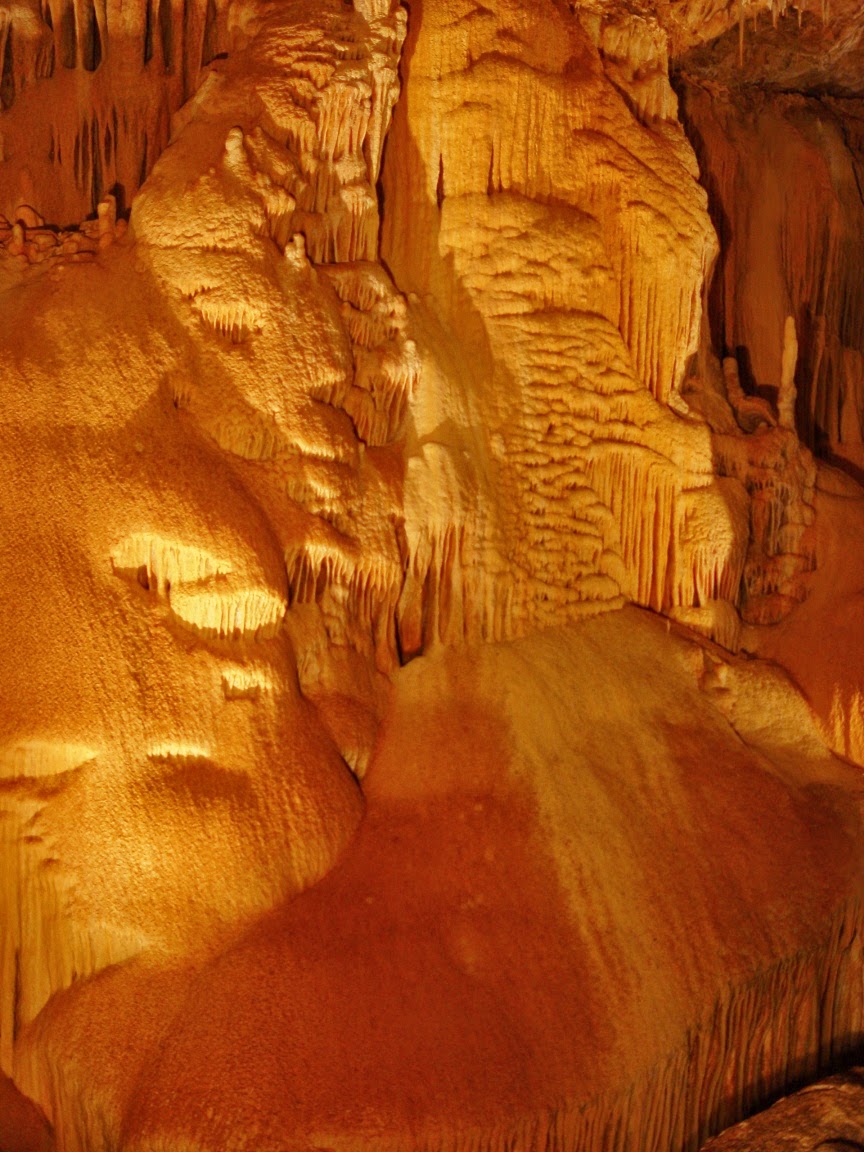 I'm not sure what to make of the features below. There are some nice soda straws, which are so delicate that they are the first to be broken off in unprotected caves. The spiky things are the beginnings of helictites, which tend to ignore gravity, growing instead under the influence of water pressure from the interior of the "confused" stalagmites. 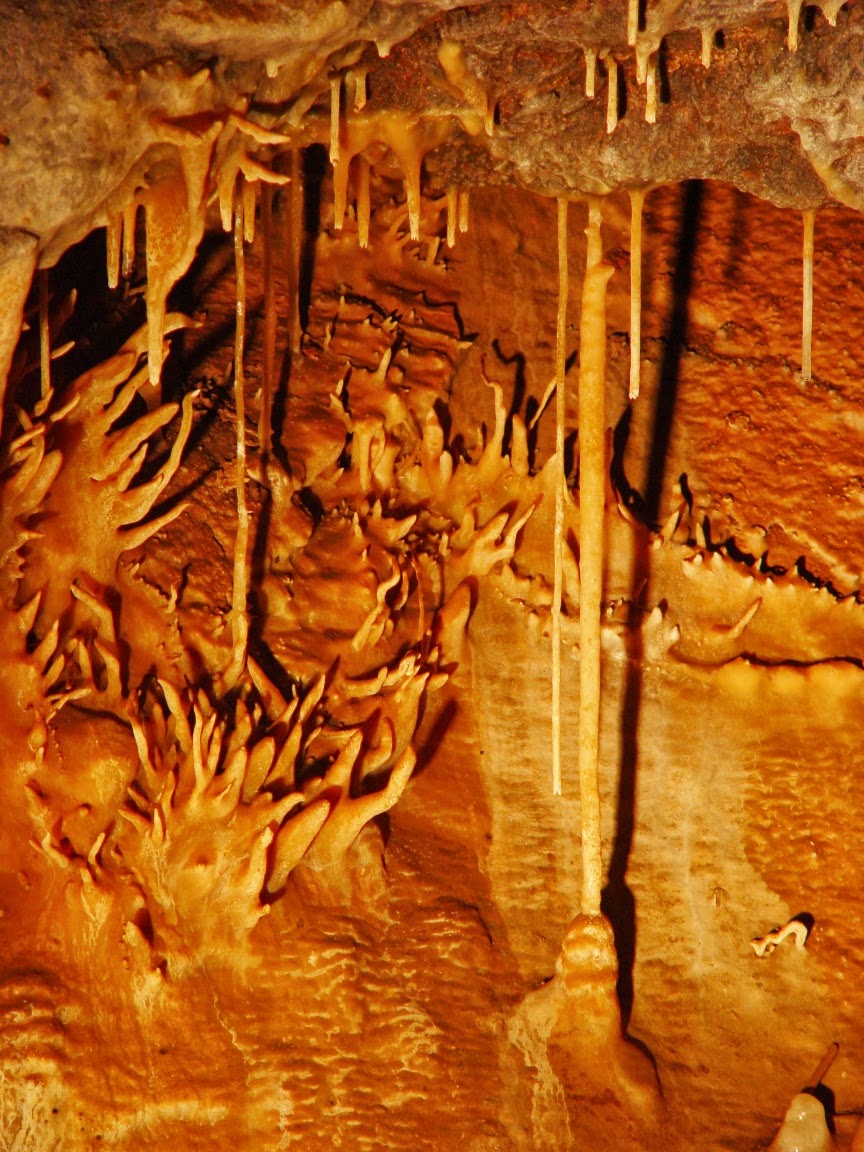 Below, one can see a spectacular column in the foreground, and some marvelous draperies in the upper left background. None of the features were broken off, and none were vandalized. I can barely describe what it is like being in such a place. Every minute in the cave was precious. I know there is an argument about worrying over technology in situations like this, and that one needs to live in the moment, reveling in the experience of being, but I actually find caves disorienting. Despite all my orienteering skills on the Earth's surface (and people tell me they are formidable) I get lost in caves. I can't remember one room or one decoration from another. Photographs keep me centered, and keep the memories of the moment alive. And I can share them! I passed a stunning wall of draperies. Time was beginning to run short and I would be needing to leave this fantastical world for the surface before long. I was sweating, dehydrated, hungry and tired. It wasn't difficult getting around, but the humidity gets to you eventually, draining your energy. I started to head for the exit chamber and the airlock to the outer world. 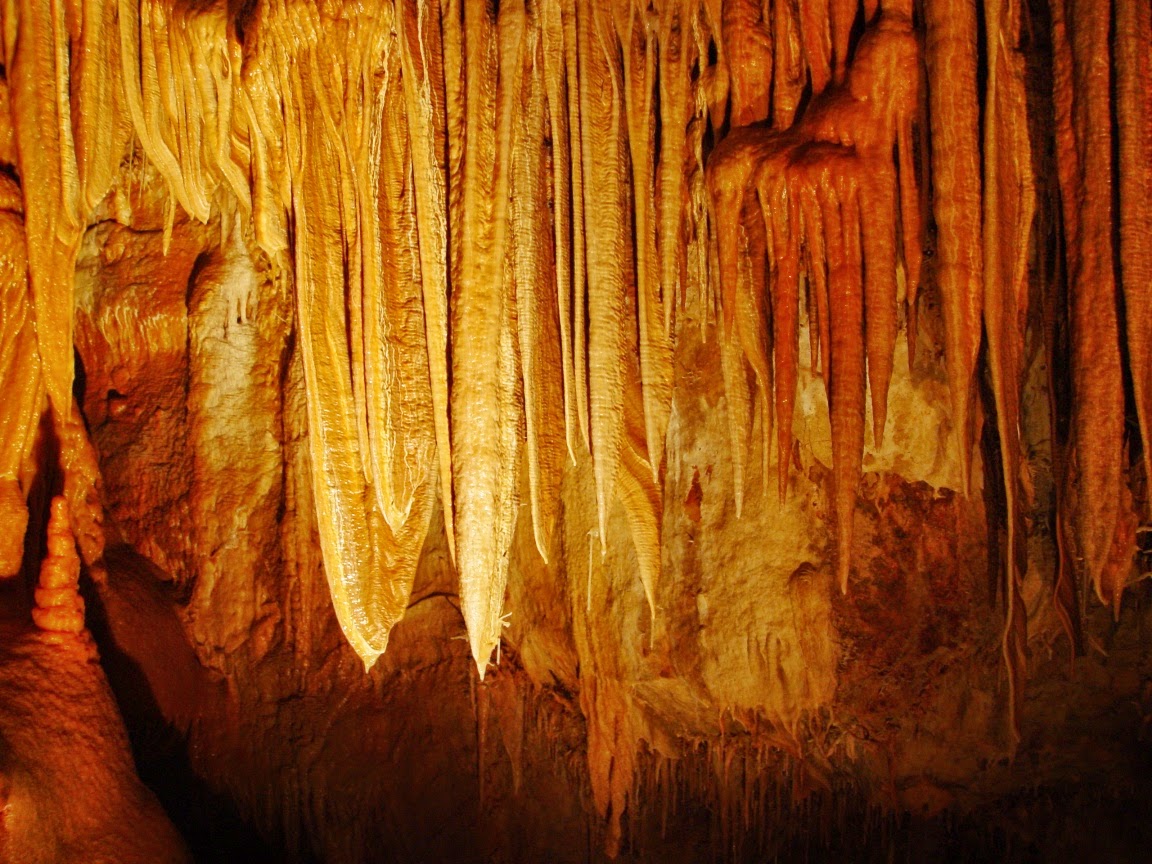 There was one last close-up of a moist, almost glowing surface of some flowstone, and then I was out the door to the world of light and fresh air. The contrast was shocking. Caverns are incredible places, but they aren't really a human environment. I can understand how the first explorations of caverns could awaken our ancestors to the ideas of shadow-worlds with their demons and nightmares. Hell was presented as an underworld of fiery pits and eternal torment. But in a different context, caverns have been a place where dreams come alive. I think of the spiritual awakening of an initiate in a deep cave thousands of years ago encountering the drawn images of animals and people on a cavern wall seeming to run and play in the flickering light of a burning torch. Wandering through a pristine cave in the present day brings us face to face with a fascinating world that is not completely apart from us. The deep hidden parts of caves may not be a human environment, but much of our early spiritual and cultural development derived from living and exploring the outer edges of the underground environment. Caves are places where magic seems possible. 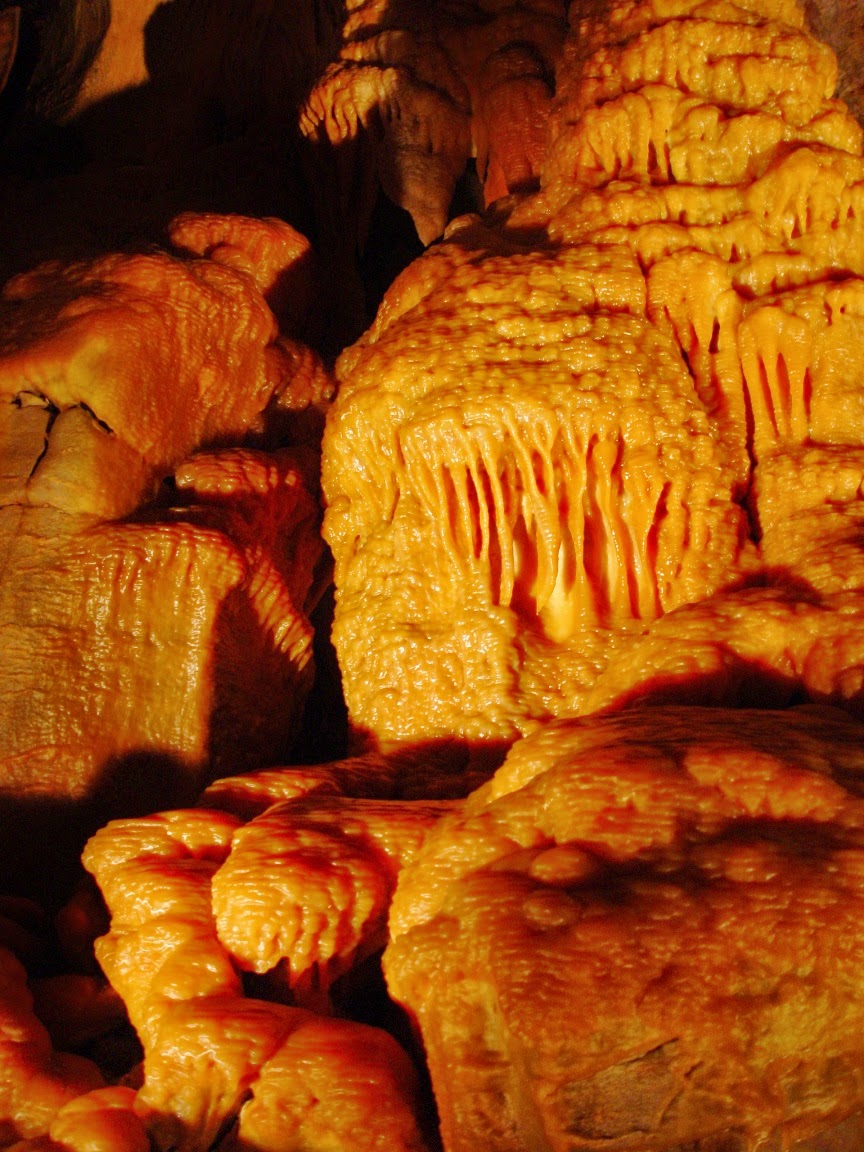