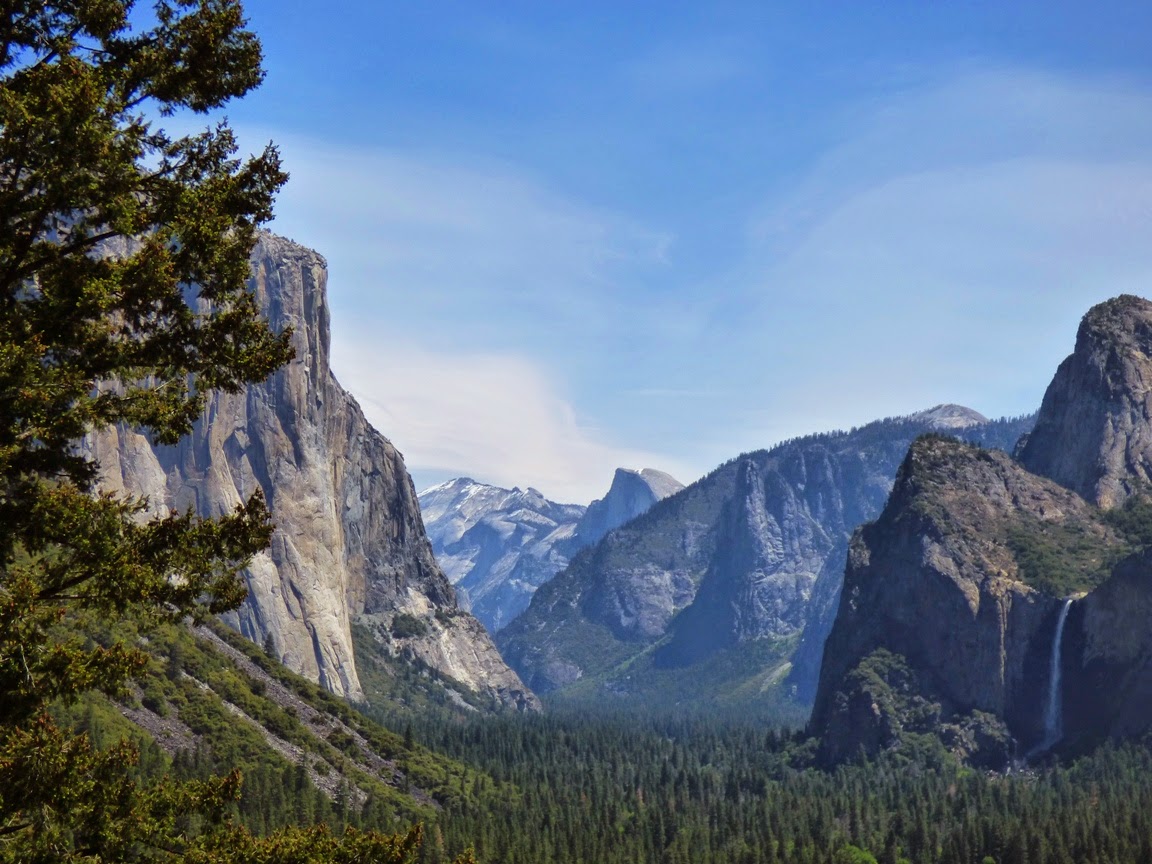 Yosemite Valley is an awe-inducing place, a place that was the inspiration for my current series on "What are the Most Incredible Places You've ever Stood"? I've been there many times and I never get tired of it. It is a destination for three of my field trips every year. It is an easy thing to drag a bunch of students up there (you make it required and stuff them on a bus), but how does one get past the sheer elegance of the scenery and explain to students the grandeur of the geological story of Yosemite as well? Part of it is letting them find out for themselves.

It's a bit of a trick to take 40 students to Yosemite on a busy Saturday in May. Buses are allowed to park in only two or three spots in the valley, and an extended discussion of geology is not possible in a place like the Wawona Tunnel View (above and below). It's simply too crowded with noisy buses and motorcycles and hundreds of tourists enjoying a first view of the valley, and it's really not fair to have a bus parked there hogging a premium spot. So we park the bus at Yosemite Lodge, and I set them free to wander through the park...to an extent. We make appointments. They find their way through the valley floor on the free trams, and we meet each other at a few of the most important localities (principally the Happy Isles rockfall site and a vantage point where we can talk about Half Dome and Yosemite Falls). It works well most of the time because they get a sense of exploration to go with the "learning". 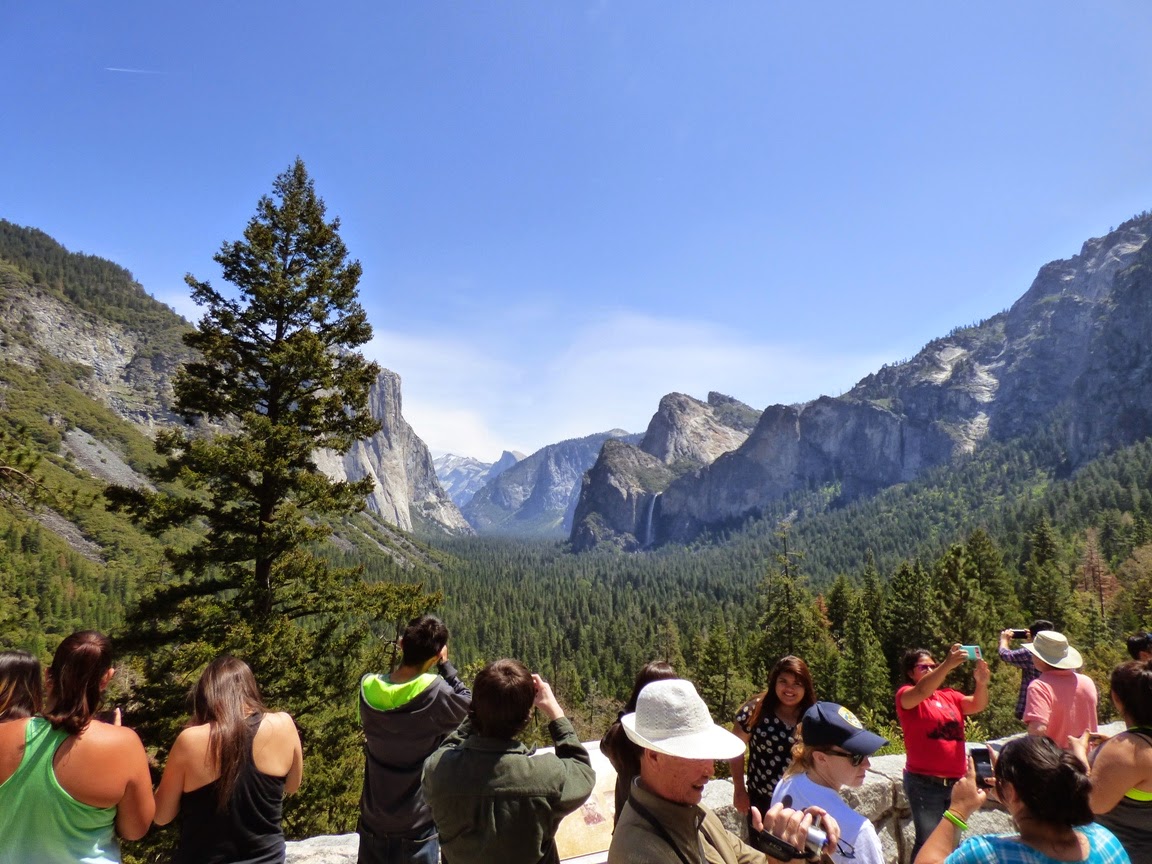 I like the schedule for a different reason. The students have about two hours to find the visitor center and make a series of observations while making their way through the tram system to the other end of the valley. That's two hours that I can use to make some observations of my own, along with a bit of exploration. The trams are great, but nothing can compare with walking the length of Yosemite Valley on one of the less busy valley trails. Two hours of brisk walking for me equates to about six miles. I headed up the trail to Lower Yosemite Falls, trying to make my way through hordes of tourists (and a fair number of my students headed the same direction). It was crowded and noisy, but only a few hundred yards further I had the trail largely to myself. 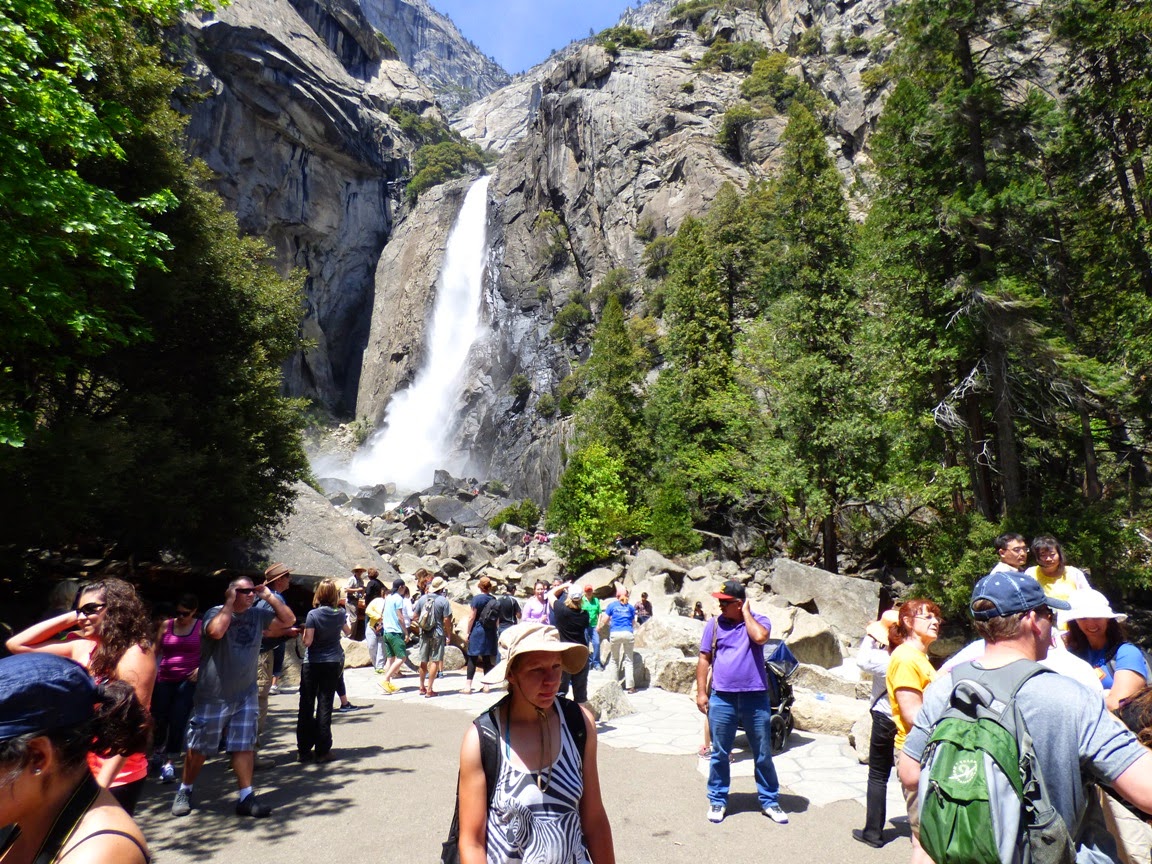 The North Valley Trail follows the base of the cliffs above the roads and valley developments. It is surprisingly quiet; I couldn't hear the traffic far below, only the breeze through the conifers and pleasant song of a bird I couldn't see or identify. 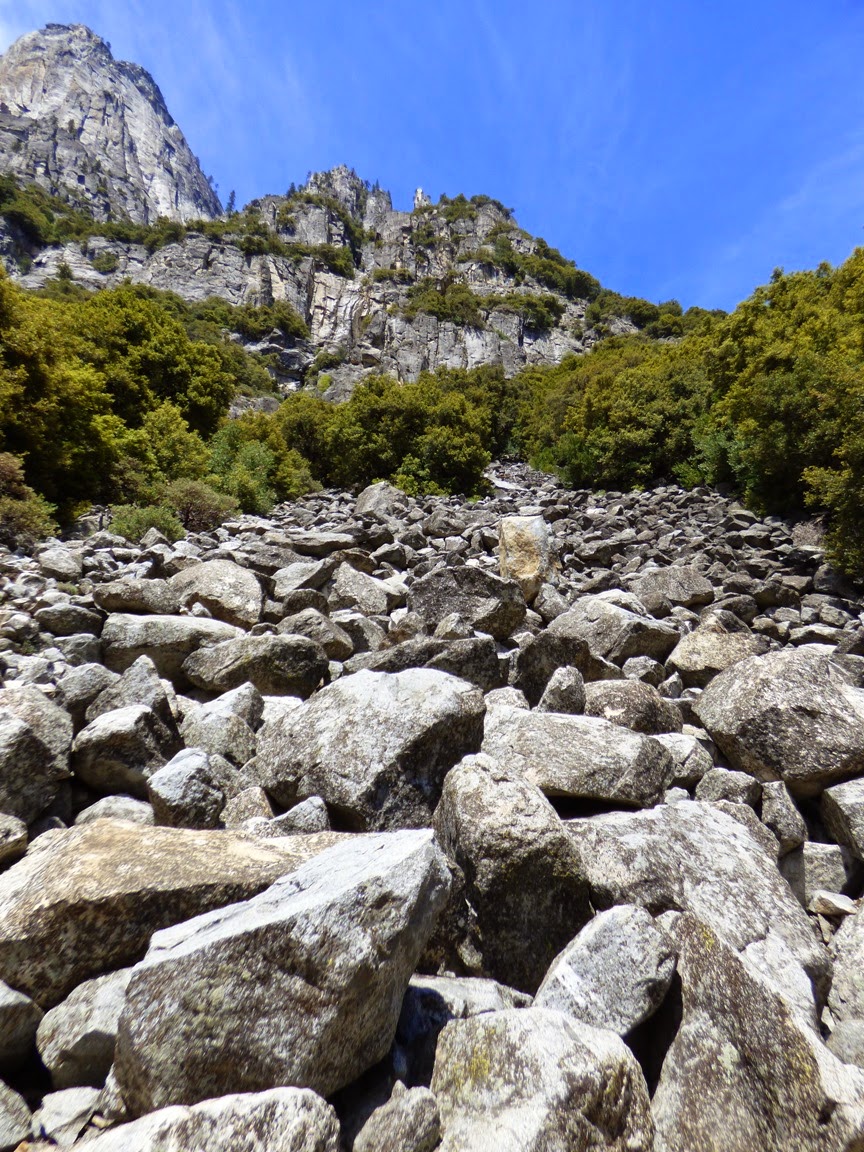 I soon passed a superb example of a talus slope at the base of Yosemite Point. In many places the cliffs of Yosemite are bold and vertical, but in other places there are recessed coves with extensive slopes of fallen rocks. The difference lies in the pattern of jointing in the rock. Granitic rocks form deep in the crust miles below the surface under great pressure. As they are exposed by erosion, the rocks expand and fracture. The composition of the rock seems to determine the spacing of the joints, and when they are far apart, bold cliffs occur. When they are closely spaced, rock falls are common and talus slopes are the result. 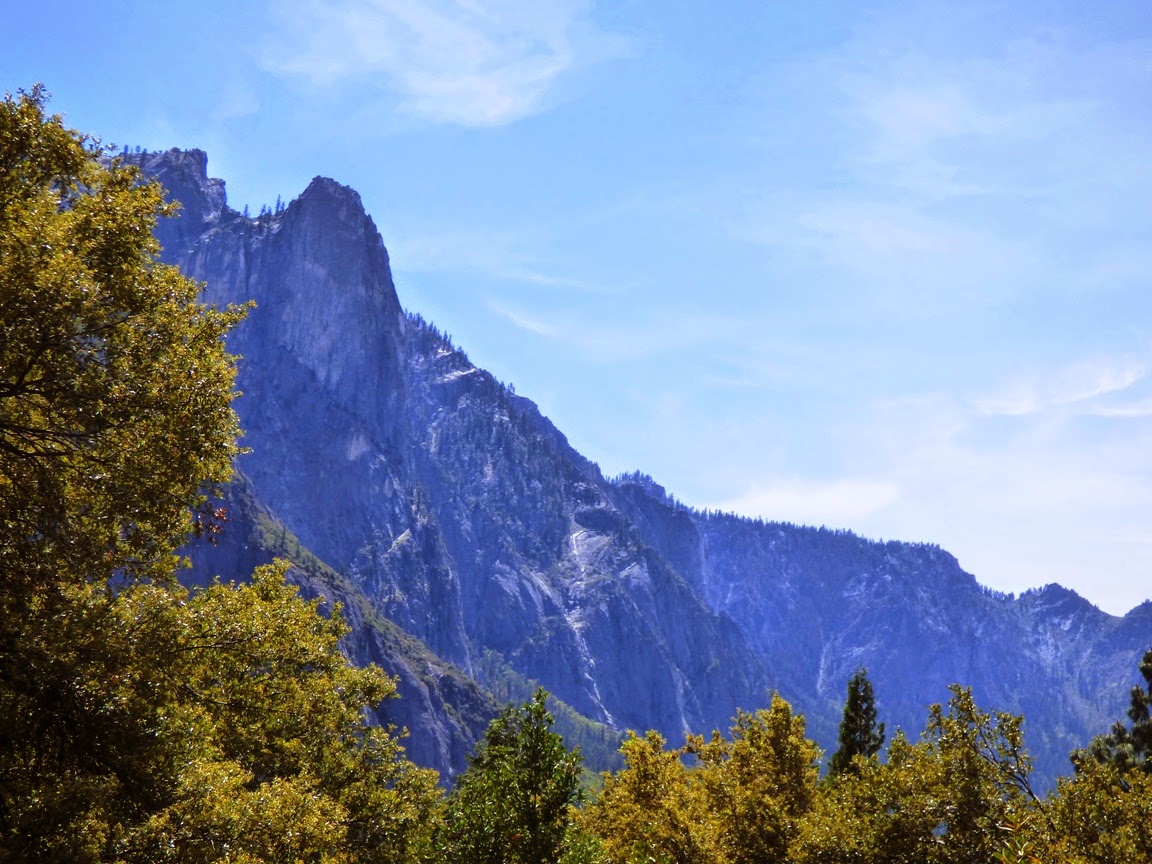 The trail climbs several hundred feet above the valley floor, offering views in both directions. Across the valley stands Sentinel Rock, one of the most imposing cliffs in Yosemite (although it sometimes gets lost in the scenery, being located across the valley from Yosemite Falls). On the other side are the cliffs of the Three Brothers. The cliffs that make the three brothers are more easily seen from the other side, but from my vantage point I could see the scar of the 1987 Three Brothers rockslide, which dumped something like 600,000 cubic yards of debris onto the valley floor. Luckily no one was hurt, since the park service had some warning that a big slide was imminent and closed the road at the base of the cliff. It was the largest mass wasting event in the recorded history of the valley. 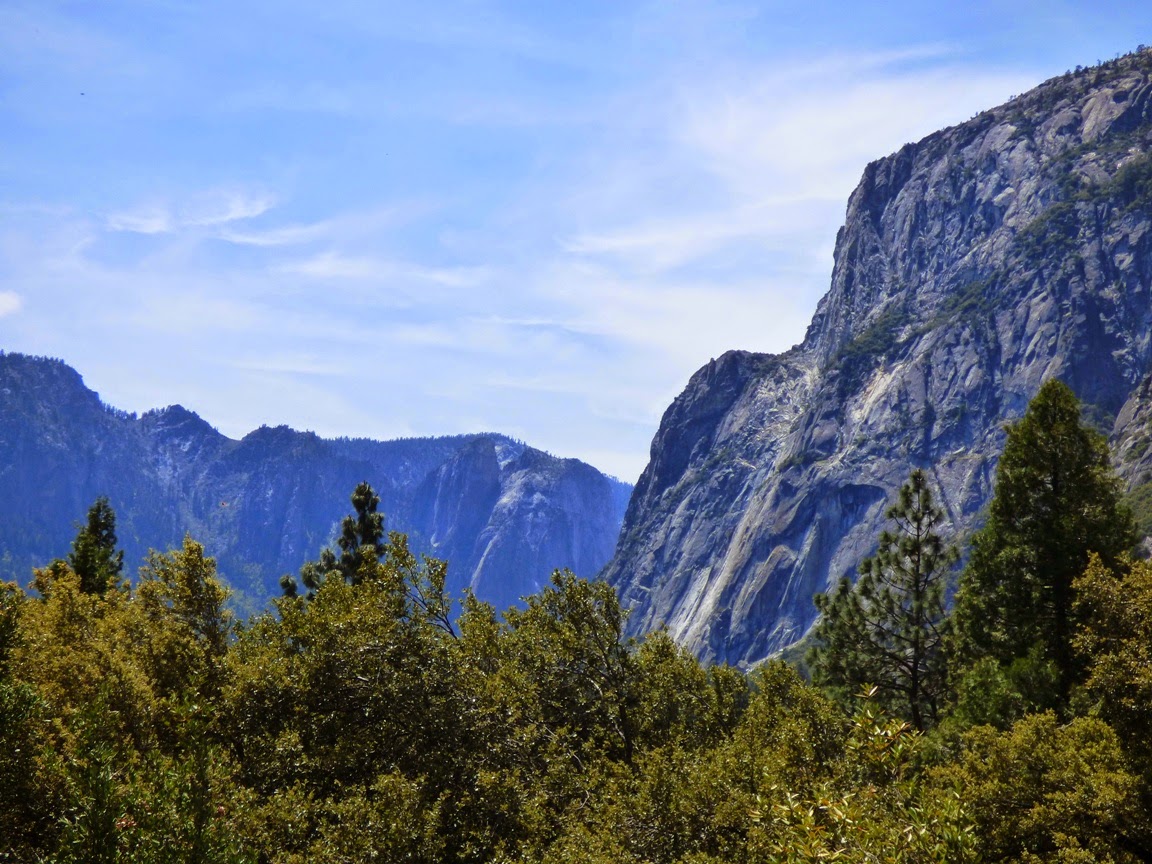 John Muir and other earlier visitors remarked on the open park-like aspect of the woodlands on the valley floor. Fire suppression since the establishment of the park in 1890 has allowed the growth of a thick forest across most of the valley, but below the Royal Arches and Washington Column there are some beautiful old oaks that recall the original state of the valley at the time it was discovered by Europeans (the Miwoks and other first nation people have known of the valley for thousands of years). 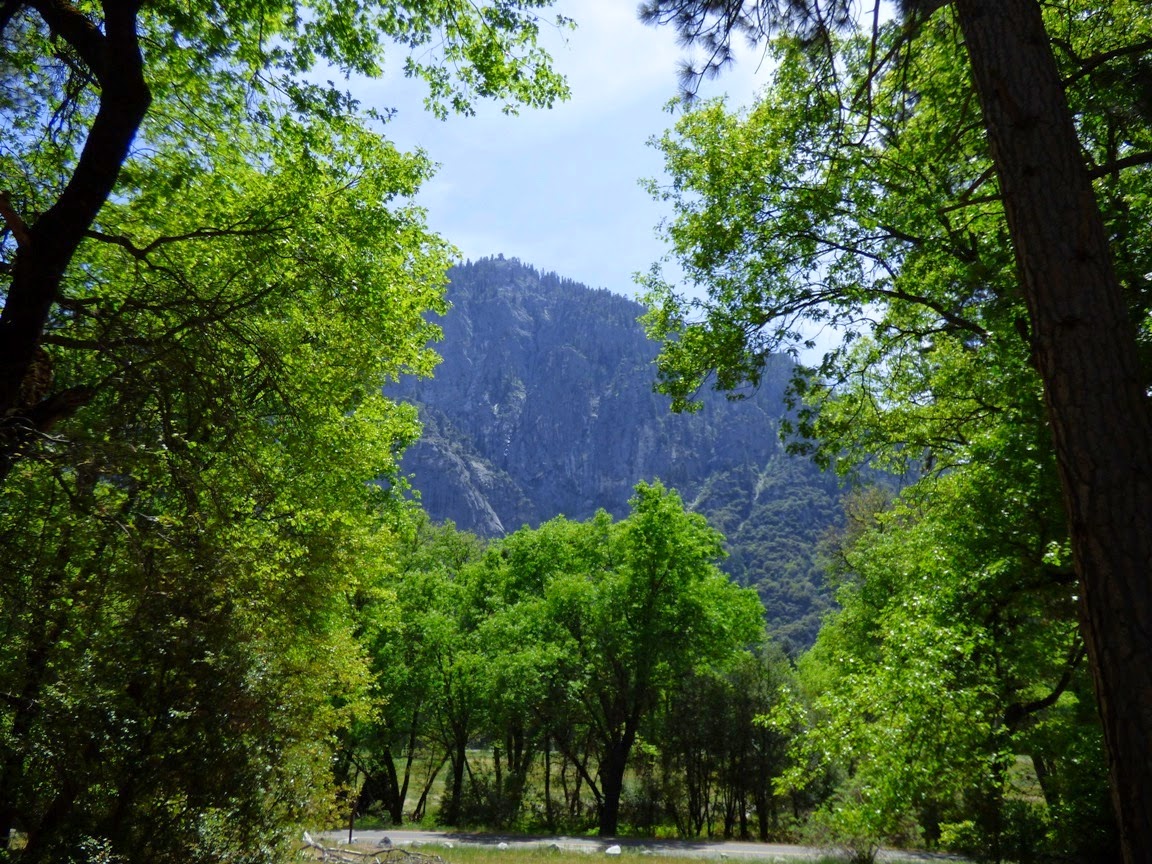 Half Dome soon became visible as I worked my way towards Mirror Lake. 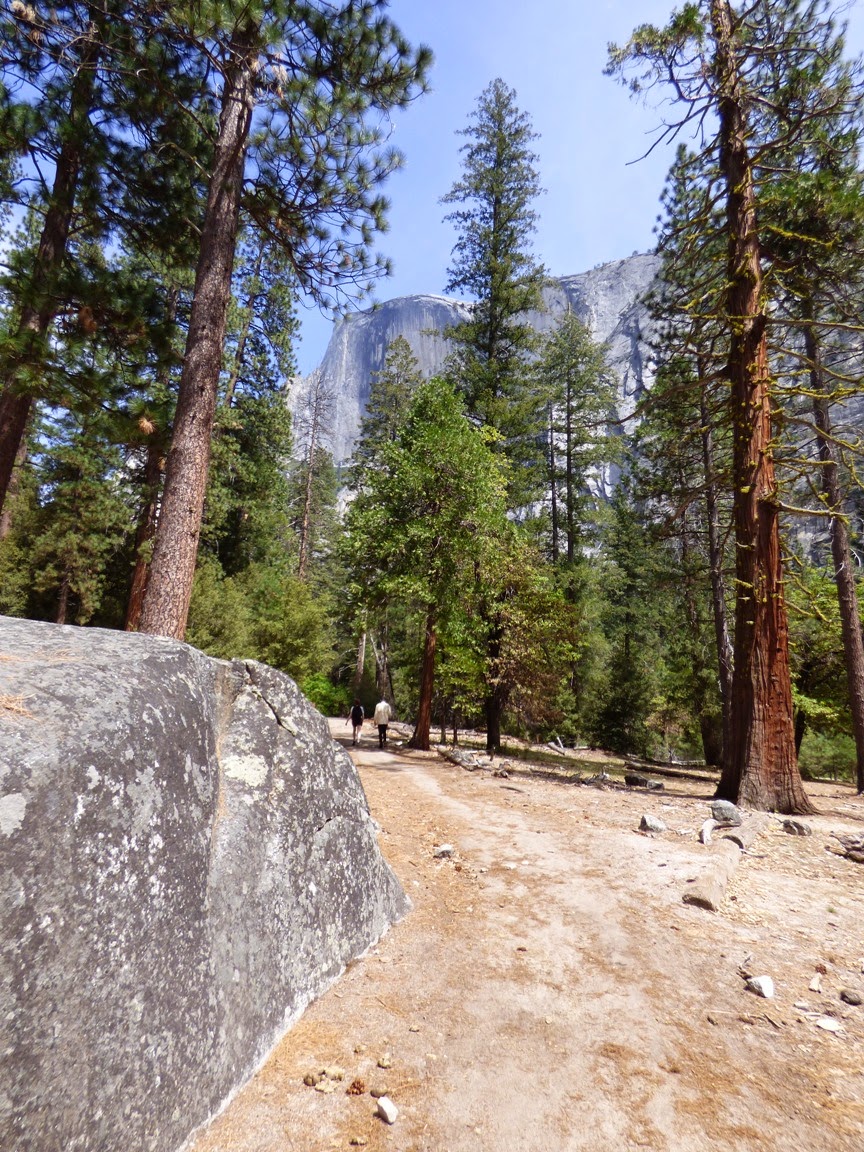 The Dogwoods were still blooming along the side of the trail. 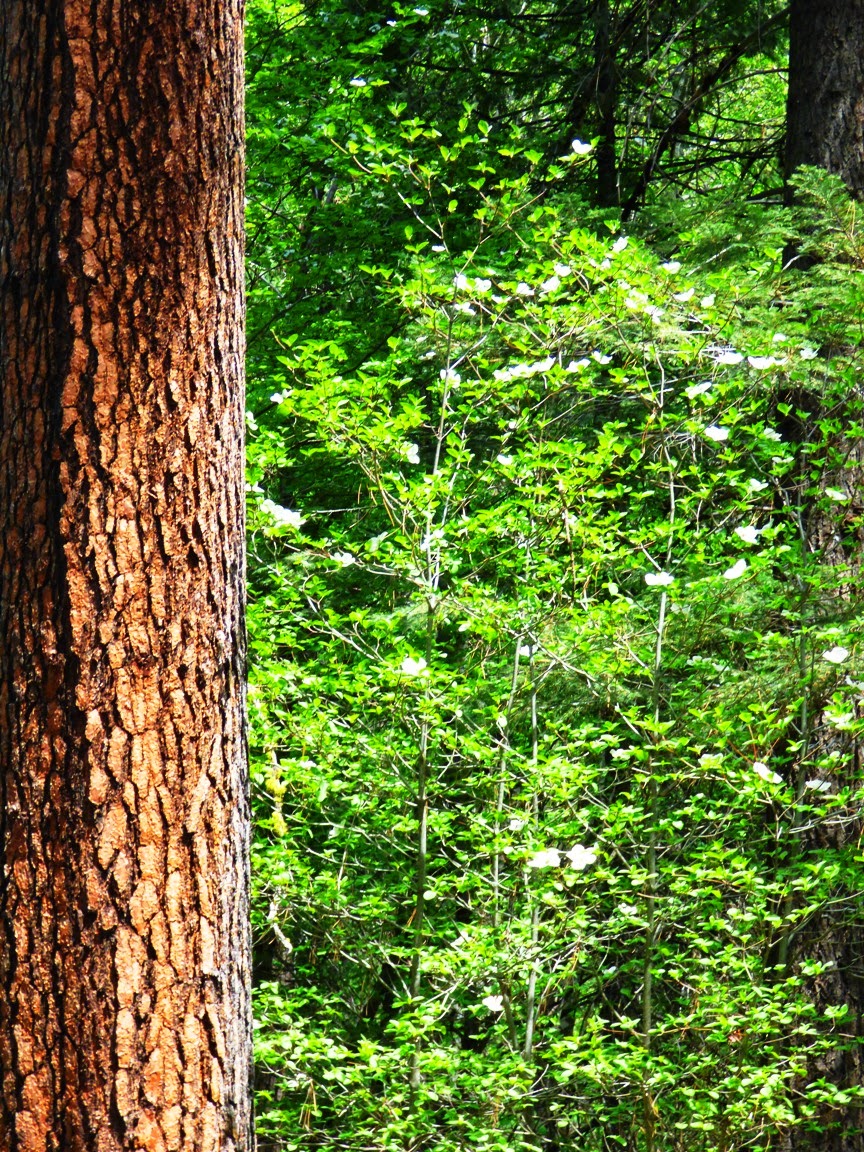 After three or four miles of walking I arrived at Mirror Lake. The "lake" is more of a wide spot in Tenaya Creek that developed as a result of a gigantic landslide in prehistoric time. The creek formed a series of ponds behind the rockslide that in springtime reflect the surrounding cliffs, especially Mt. Watkins and Half Dome. By summer Tenaya Creek often runs dry (especially this year with the drought conditions). On Saturday it was beautiful, but also crowded. I set off towards Happy Isles and soon left the crowds behind. 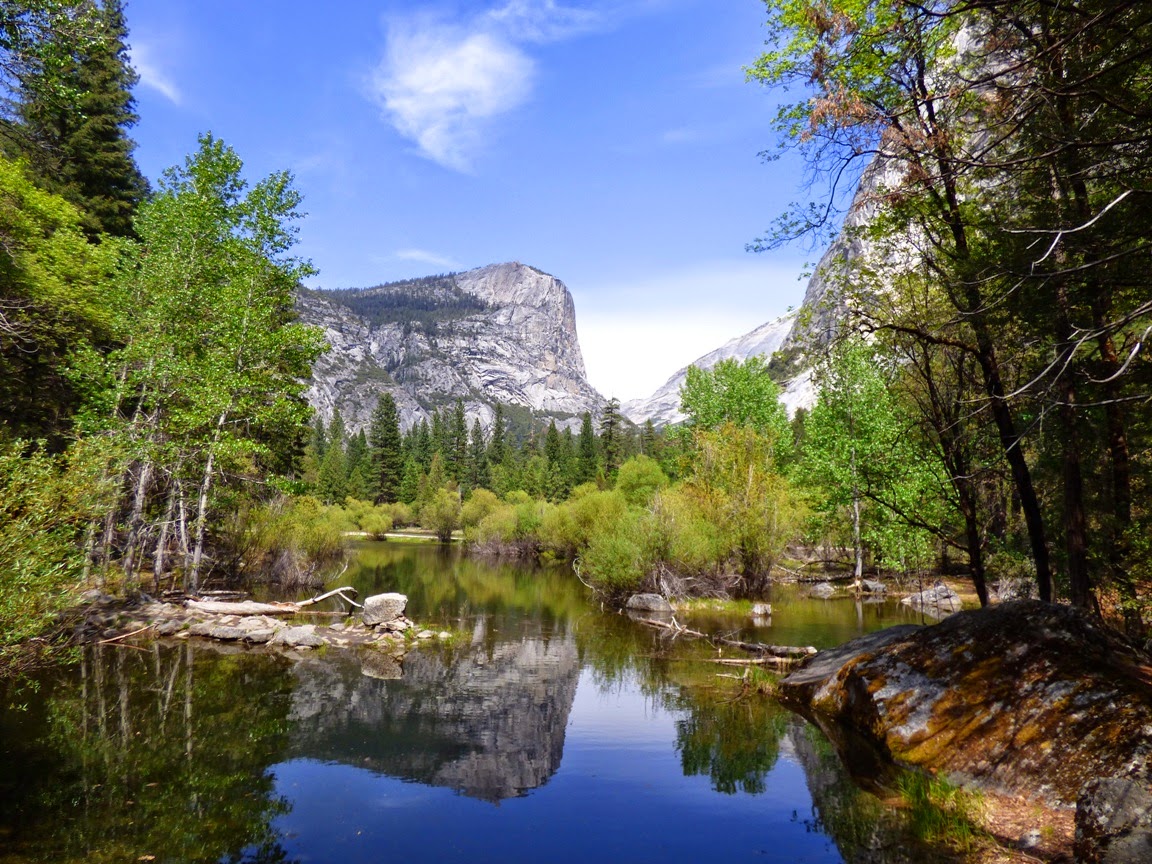 Half Dome from the vantage point of Mirror Lake is the very definition of "looming". It is nearly 4,000 feet of steep cliffs. Another major mass wasting event took place near here in 2009, the Ahwiyah Point rockfall. It involved something like 115,000 tons of granitic rock. Luckily it happened early in the morning and no one was hurt. 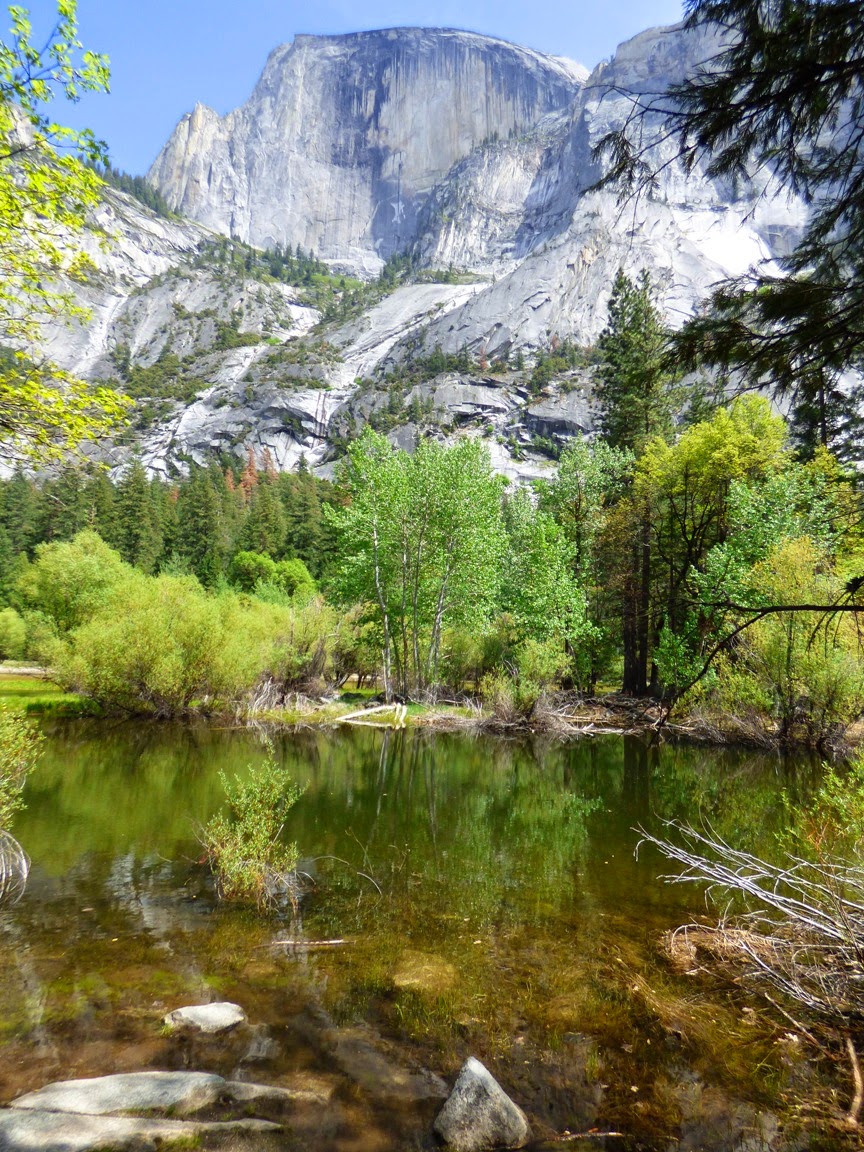 The small details are easy to miss in a crush of people. I enjoyed some more Dogwood flowers... 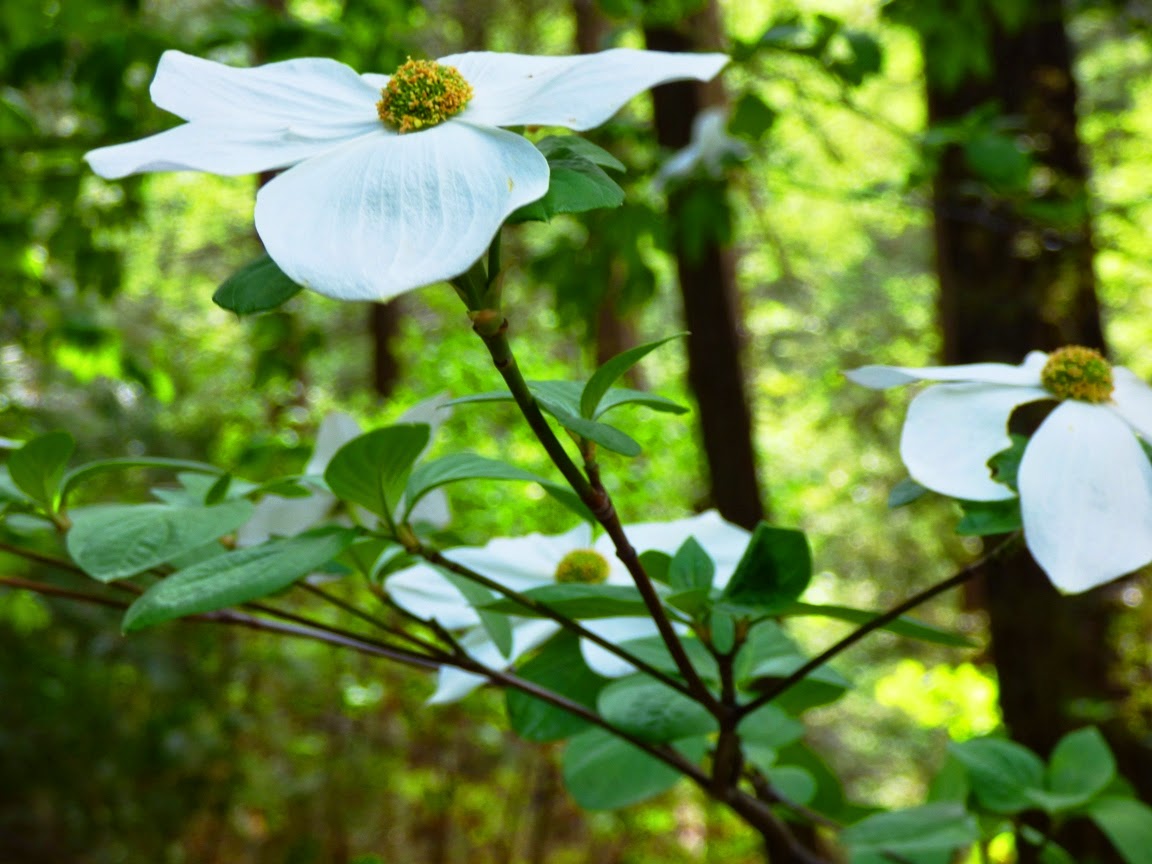 ...and the hard work of huge bumblebee in the Lupine blooms. 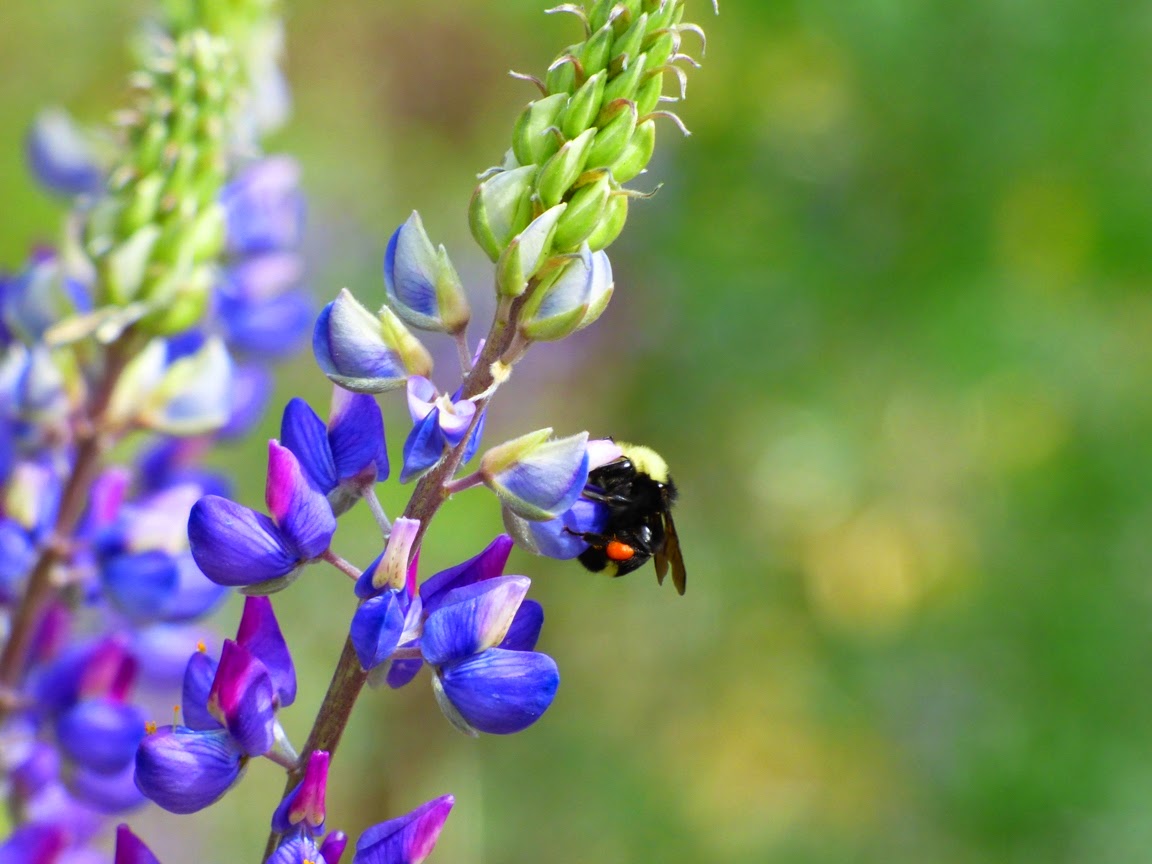 After I met with the students at Happy Isles, we started making our way back to Yosemite Lodge. I took one look at the packed tram, and decided it would be nicer to walk back. The direct route was two or three miles, and I had a fair chance of beating the tram (the dozen or so stops and the heavy traffic made for a slow motorized journey). Along the way I was thrilled to see a White-headed Woodpecker for the first time. 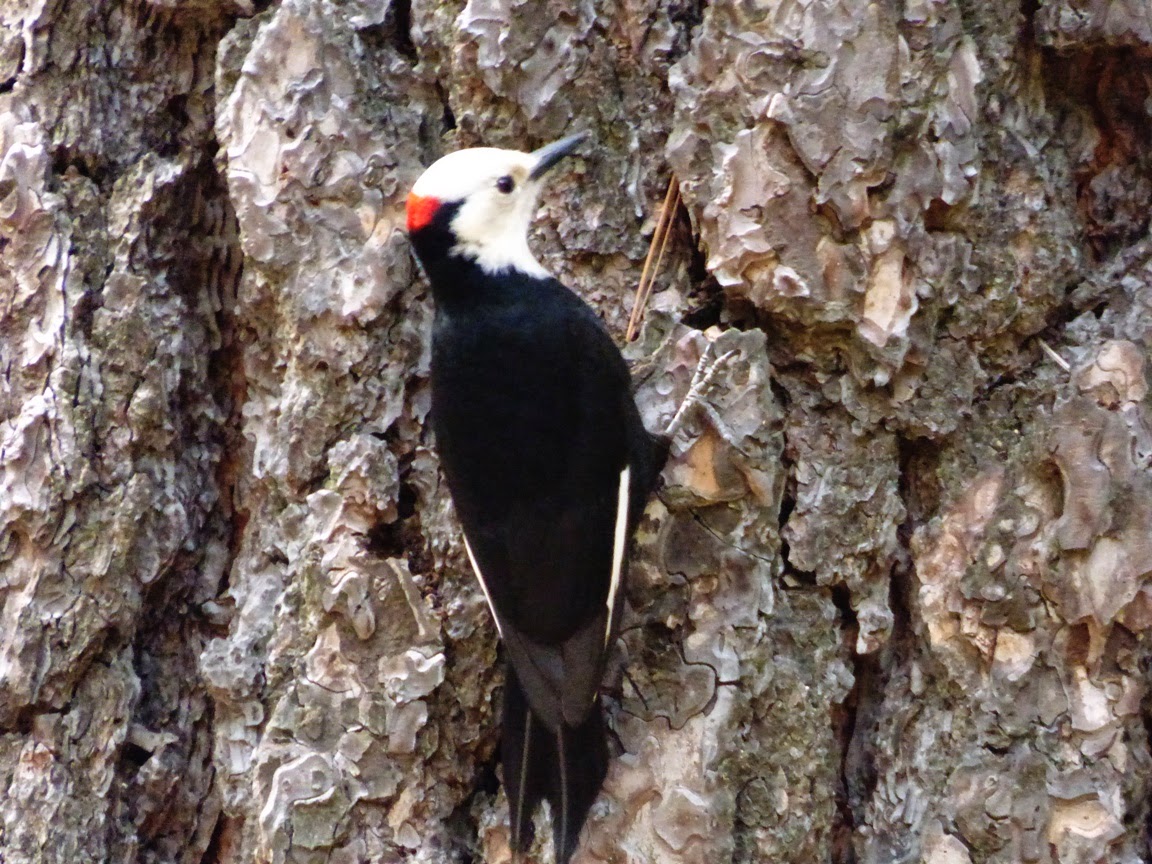 Our final stop was in a meadow at the base of Yosemite Falls. It provided an outstanding view of Half Dome where we could discuss the origin of the iconic feature. Soon after we were back on the bus and headed home. It was a spectacular day! 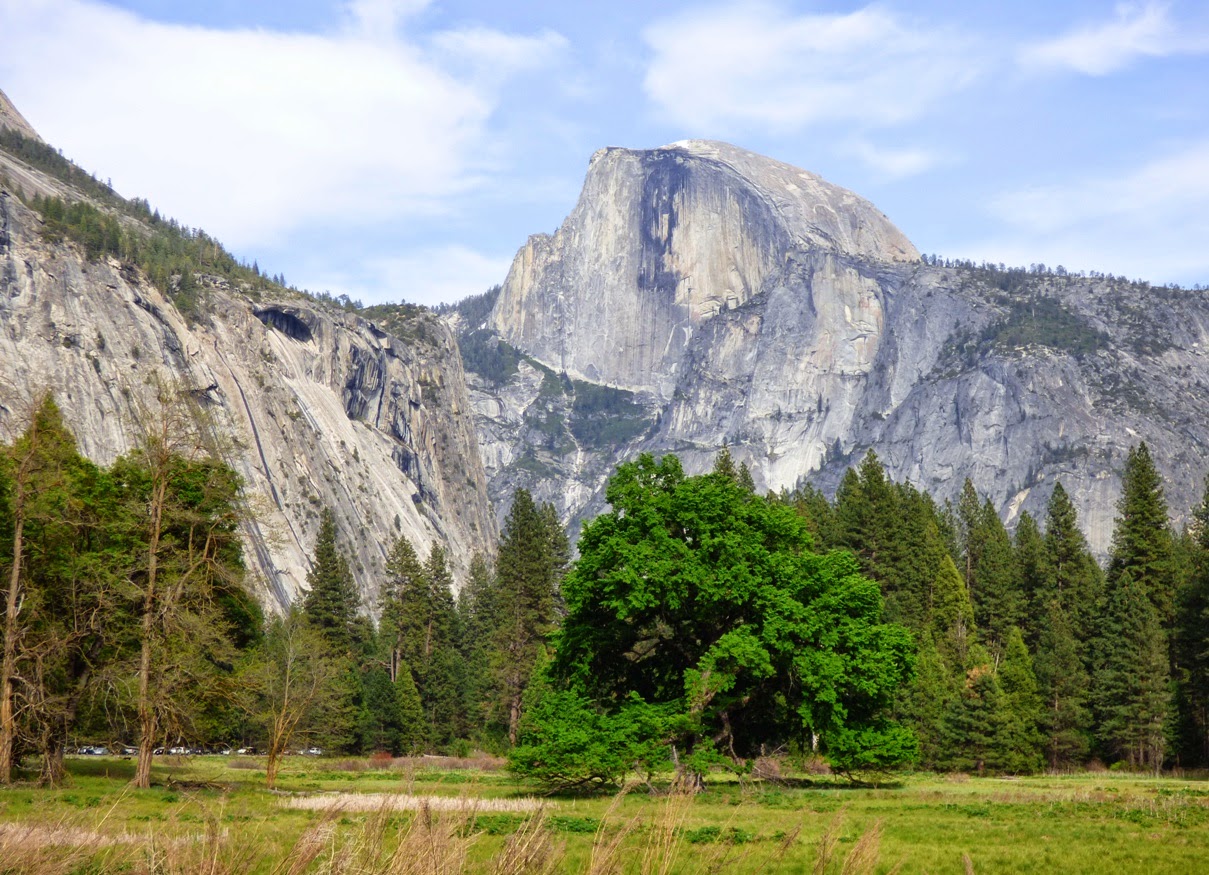 Gorgeous photos! Looks like a beautiful time to be there. I'm glad to see there's some water in the falls...it won't last long though.

Great stuff. A pretty amazing place, and your photos which SHOWED all the people are a useful reminder to people re: what Yosemite Valley is frequently like. I'm so used to cutting out the people, I forget that including them is ALSO useful. =)

Congrats on the white-headed woodpecker. One of my favorites, for sure, I've only seen it a few times. Happily, it's unmistakeable.

Glad your students get to take such a great class. =)