Imagine in Your Mind a "Scientist"

This is a question I ask my students during the first week of every class I teach. There are consistent responses: "white lab coat", "pocket protector", "test tubes", "eyeglasses". Then I ask "What gender?". They invariably answer "male". And then I ask "What ethnicity?" There is usually a pause, and the answer is invariably "white".

The core image in the minds of nearly all my students, no matter their background, is that scientists are old white guys in lab coats. I just can't imagine where they get such ideas...


There are lots of reasons that people don't imagine themselves as scientists, but the sad fact is that geology in particular has a really poor track record in the education and hiring of people who aren't white or male. I strongly encourage you to have a look at this post from Black Geoscientists:  http://blackgeoscientists.com/2014/05/18/geosciences-in-the-united-states-the-stats/. 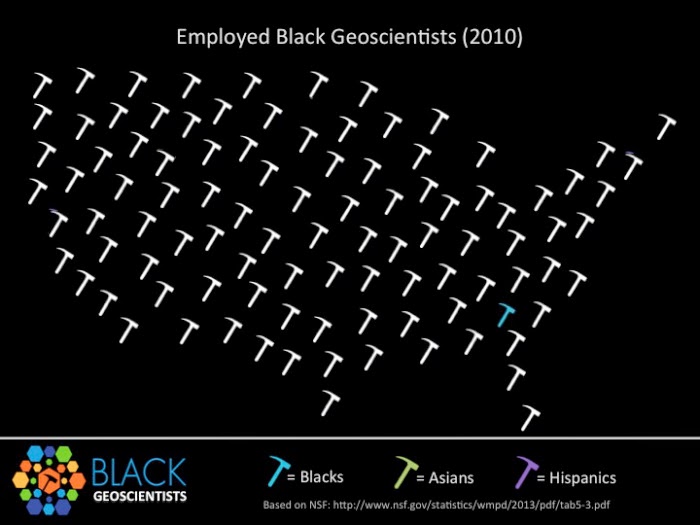 There is a lot that needs to be done. There are too many big problems in our society to leave just to an army of old white men on the verge of retirement.

Sorry to hear this. But at the canyon seems that about half our GIPs (geologist in park) are female, but never black.

Thanks so much for including me in your blog! During my grad work there were also a fair amount of women, but I was the only person of color.
-Blackgeoscientists.com

My structural geology class needs more color, there were only 2 of us in the geology department as Geoscience students. Same situation at Stony Brook.

I went on to work in the environmental field and now own an environmental company for the last 15+ years. The other two individuals didn't stick with the field, one is now a Real Estate agent and the other work in the computer science field.