You Don't Know What You've Got 'Til It's Gone: They Burned Paradise...

Nothing beautiful today; nothing inspiring...

Twenty years ago I paid my first visit to the destruction wrought by the eruption of Mount St. Helens. I stood on a high viewpoint on Windy Ridge after a long drive through downed trees and destruction and looked at a vast area and found it hard to believe that one explosion had so completely devastated a region. The ash blast from St. Helens destroyed an area of 230 square miles (600 square kilometers).

402 square miles (1,040 square kilometers). Nearly twice the area of St. Helen's destruction. That's what the Rim Fire did to my home forest, Stanislaus, and Yosemite National Park. I saw it for the first time today, and it devastated me. 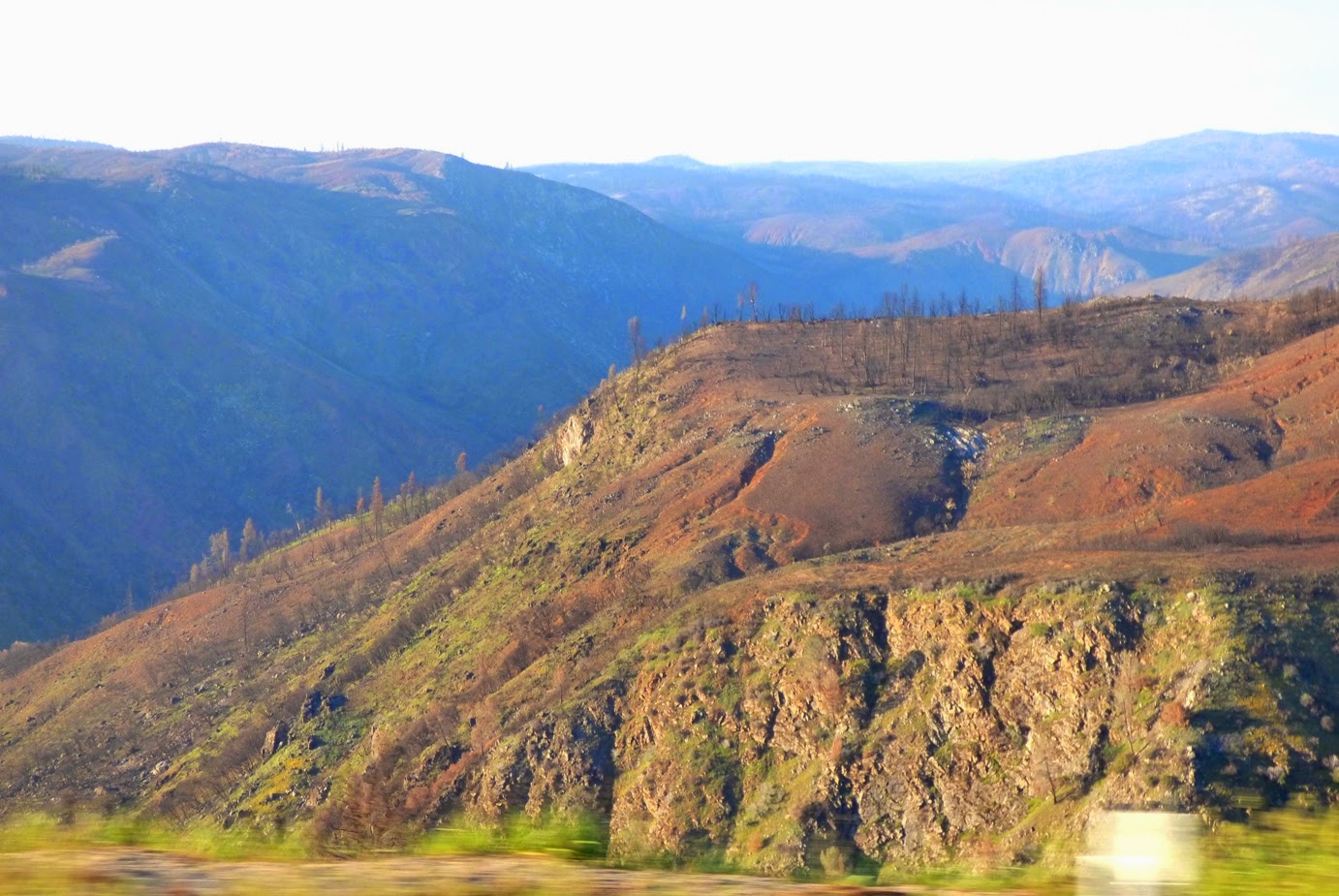 I've been to Yosemite perhaps 80 times in the quarter century that I have been teaching at Modesto Junior College. I grew to love the entire region surrounding the park, and some valleys and streams became as familiar to me as my own backyard.

And now it's changed forever, if forever is the time remaining in my life. All because some clueless moron lit an illegal fire to cook his lunch in the forest, despite a crippling drought, extremely dry conditions, and a restriction on all fires. Are people really this stupid? 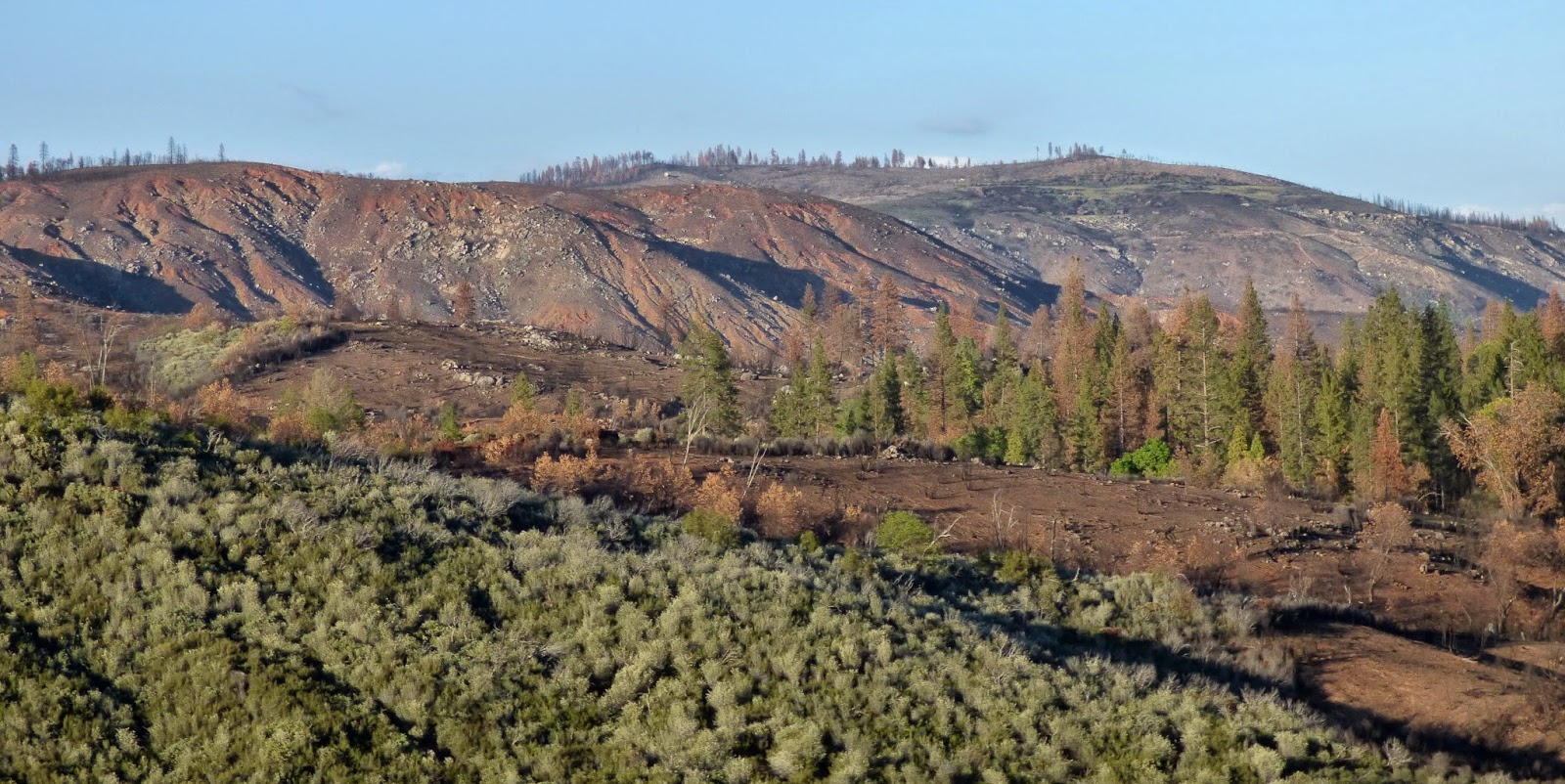 I know the whole argument that arose after three-quarters of Yellowstone National Park burned up decades ago. Fire is natural, fire is good, fire leads to rejuvenation of the ecosystem, all those things that are no doubt true. But that doesn't relieve the awful feeling that so much that was good was destroyed all at once, and there really wasn't a damn thing we could do about it. 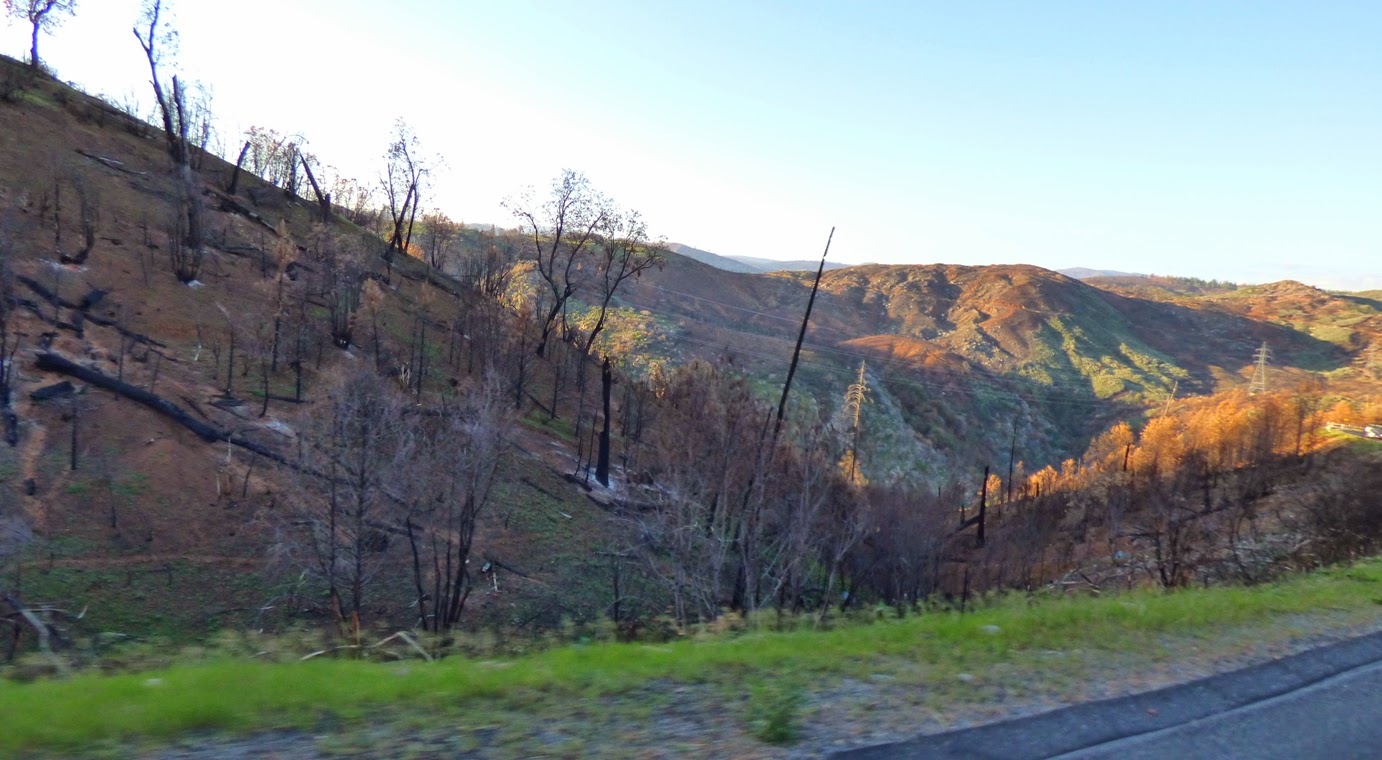 Global warming and climate change will no doubt lead to many changes in the forest above my home. The new forest will be quite different from the one that passed away into nothingness last fall. Probably more drought-tolerant shrubs and fewer trees. 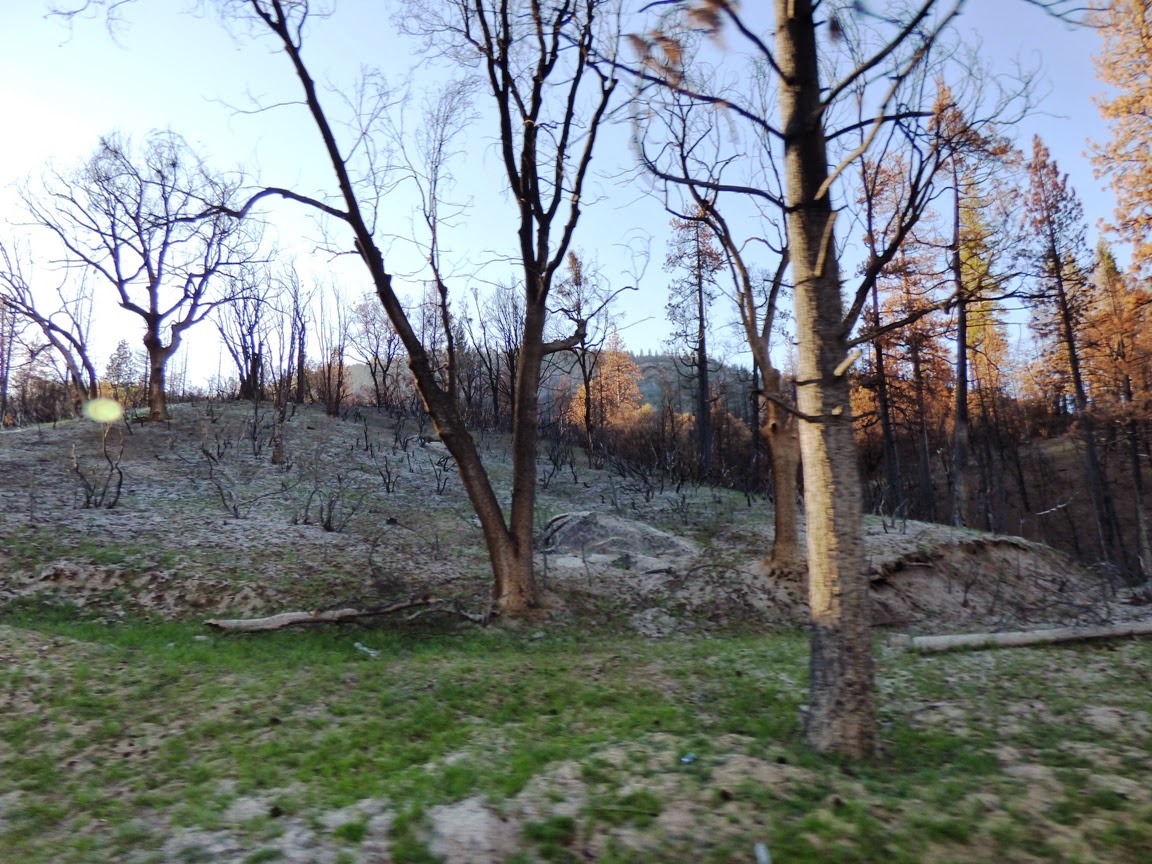 The areas we traversed on our drive home still contained standing trees, as if there were some hope that life survived in the trunk somehow. But no, the needles were brown because even though the trees were not burned entirely, their cambium layer within the trunk was boiled away and the trees are dead as surely as if they had burned to the ground. 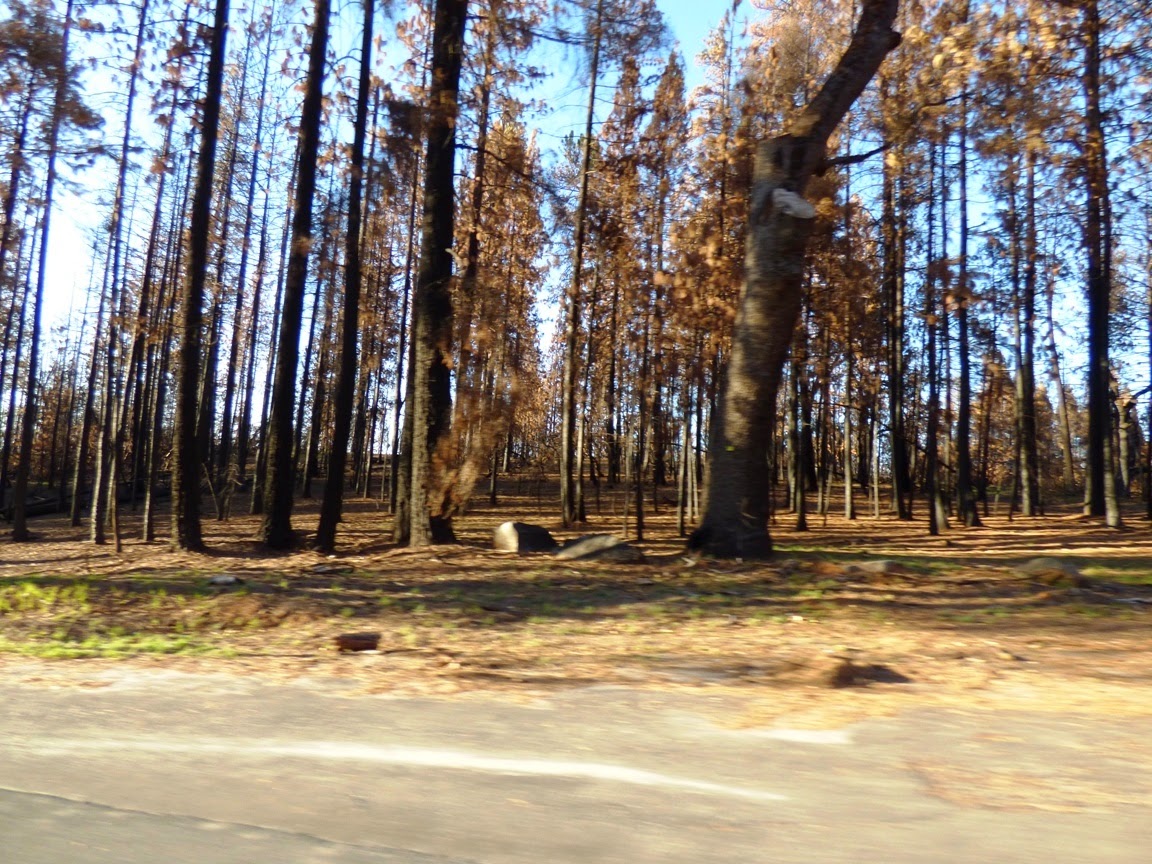 I can only offer this little bit of hope.

There were pockets of green here and there. Bits of forest had been passed over by the fast-moving flames. The horrific drought continues, but late rains in March provided enough moisture for grasses and flowers to blossom and start recolonizing the burned landscape. It's not much, but it will have to do... 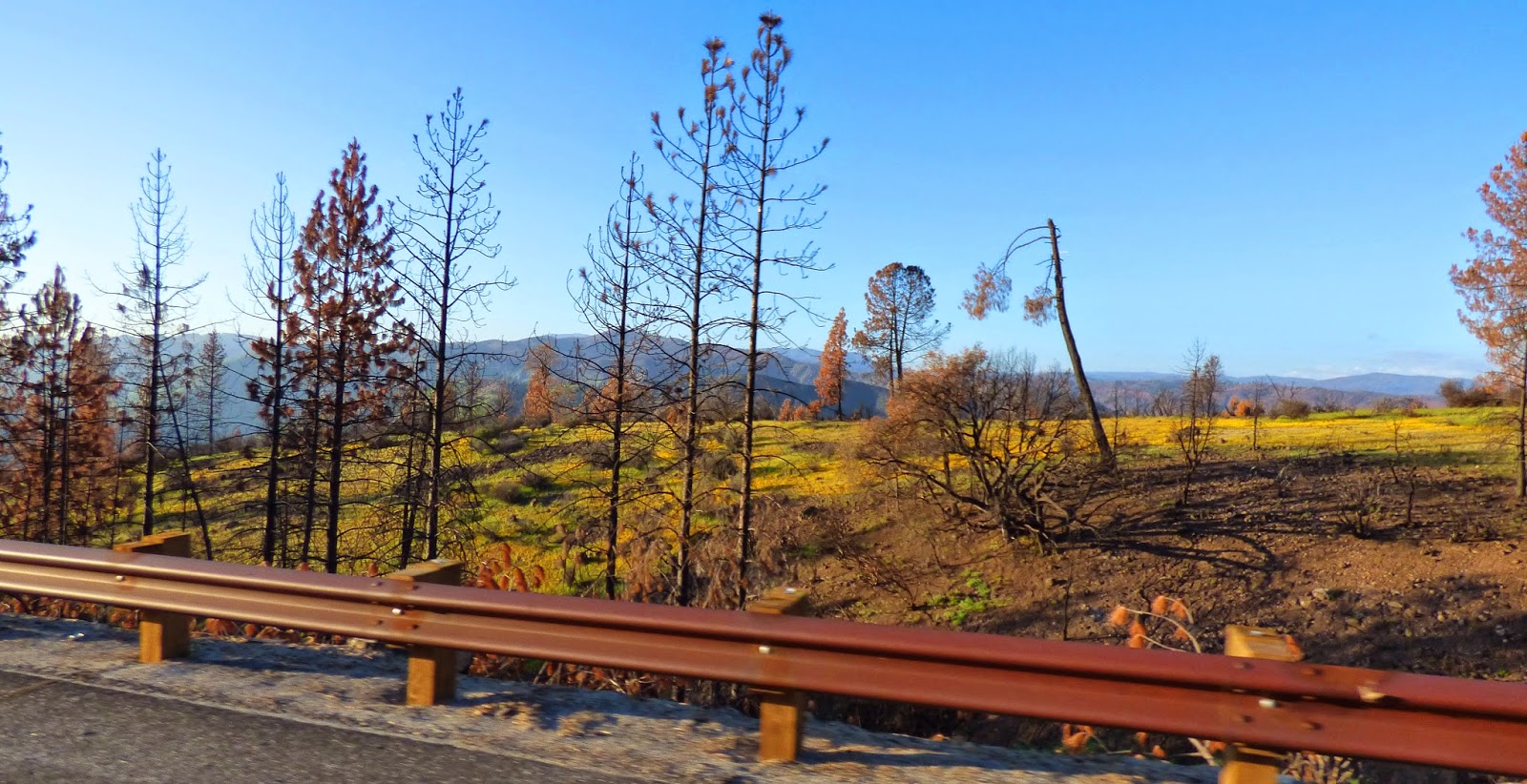 Very sad, Garry. And I look at all those dead standing trees as more tinder in the future, unfortunately.

Right about all the good reasons for fire, if a moron human didn't start it. But still not easy to look at the burnt remains of a landscape we love. When I worked at St Helens I saw new growth everyday. Life returns, yet maybe not as we knew it.