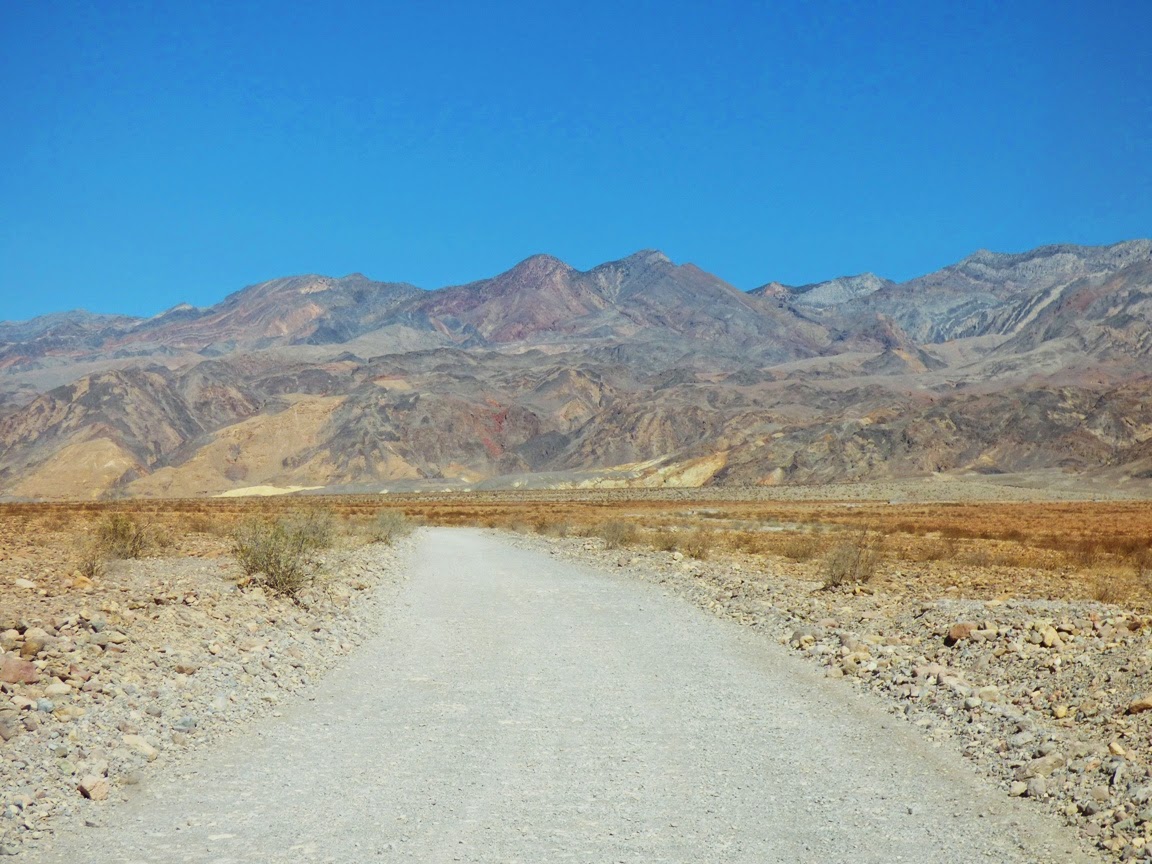 The Grapevine Mountains form the eastern margin of the Death Valley north of Stovepipe Wells, reaching elevations of nearly 9,000 feet in places. It's an imposing range, stark, barren, and rugged. All of the mountains of Death Valley are rugged pretty much by default, but erosion has not pierced deeply into many of them. They're too young geologically to have been affected much by mudflows and flashfloods in this arid environment. 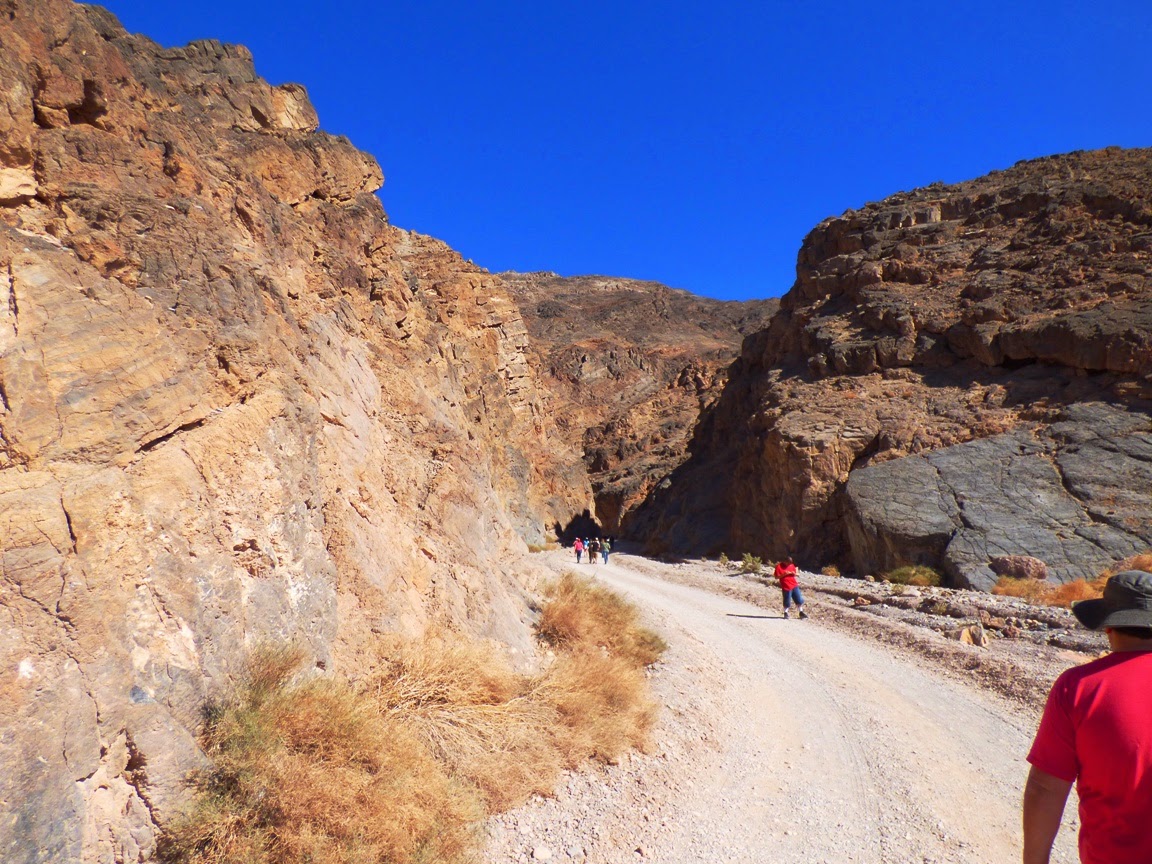 There are exceptions to everything though, and there is a canyon that practically cleaves the Grapevine Mountains in two. It's called Titus Canyon, and it is spectacular. It certainly is not a secret, and one of the great adventures of visiting Death Valley is to drive the 26 mile long gravel road through the Grapevine Mountains. Literally through the mountain, not over it. The pass at the upper end is on the east side of the mountains, not at the crest. 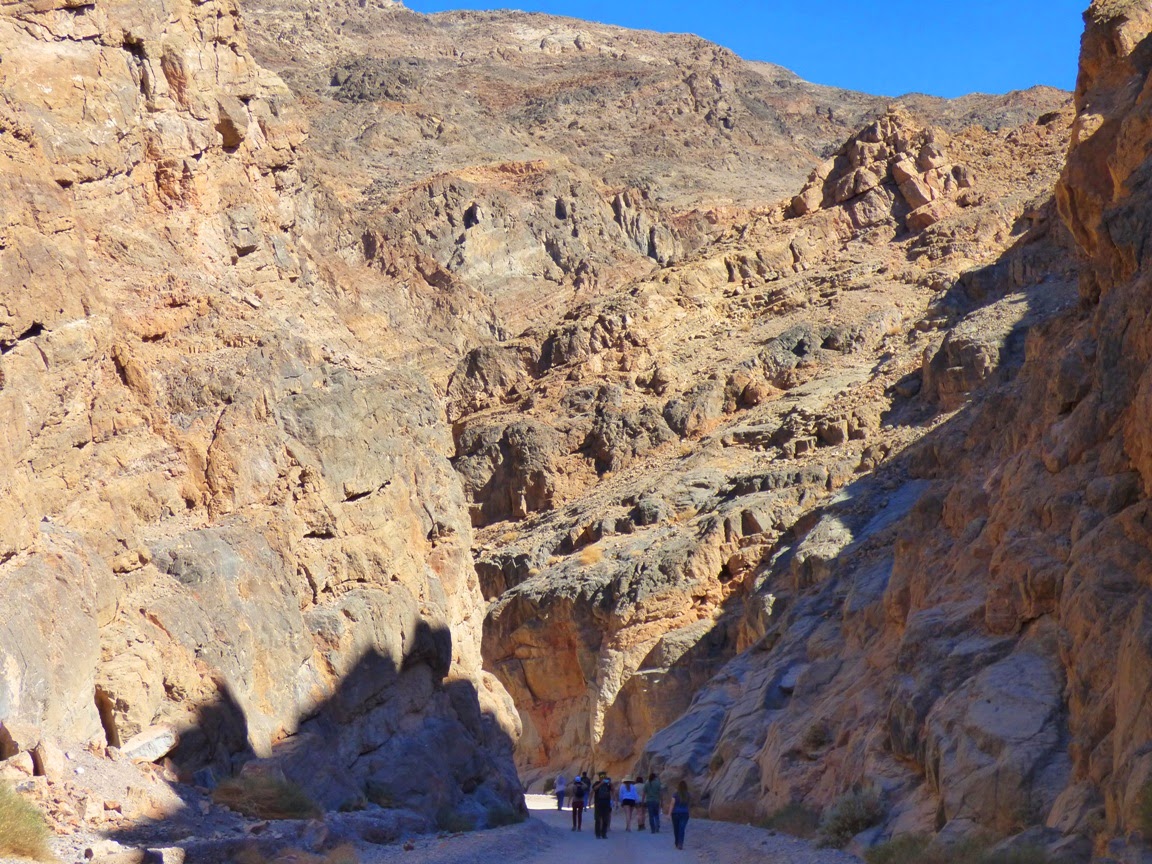 In places, the canyon reaches depths of 3,000 feet or more, and the steep canyon walls offer unparalleled exposures of the faults and folds that from the structure of the mountain range. As can be seen in the diagrams below, the structure is complex.

The "upside-down mountain"? The rocks of the Bonanza King Formation that are exposed in the lower canyon have been so completely folded that they are inverted. Even though the layers look only gently tilted, they are in fact upside down.

The road through Titus Canyon is sometimes okay for normal sedans, but conditions can change, and there are rough spots. We didn't have the time to do the entire one-way journey (from east to west), but it is permissible to drive from Death Valley to the entrance of the canyon and walk into the narrows where the canyon is deepest and darkest. 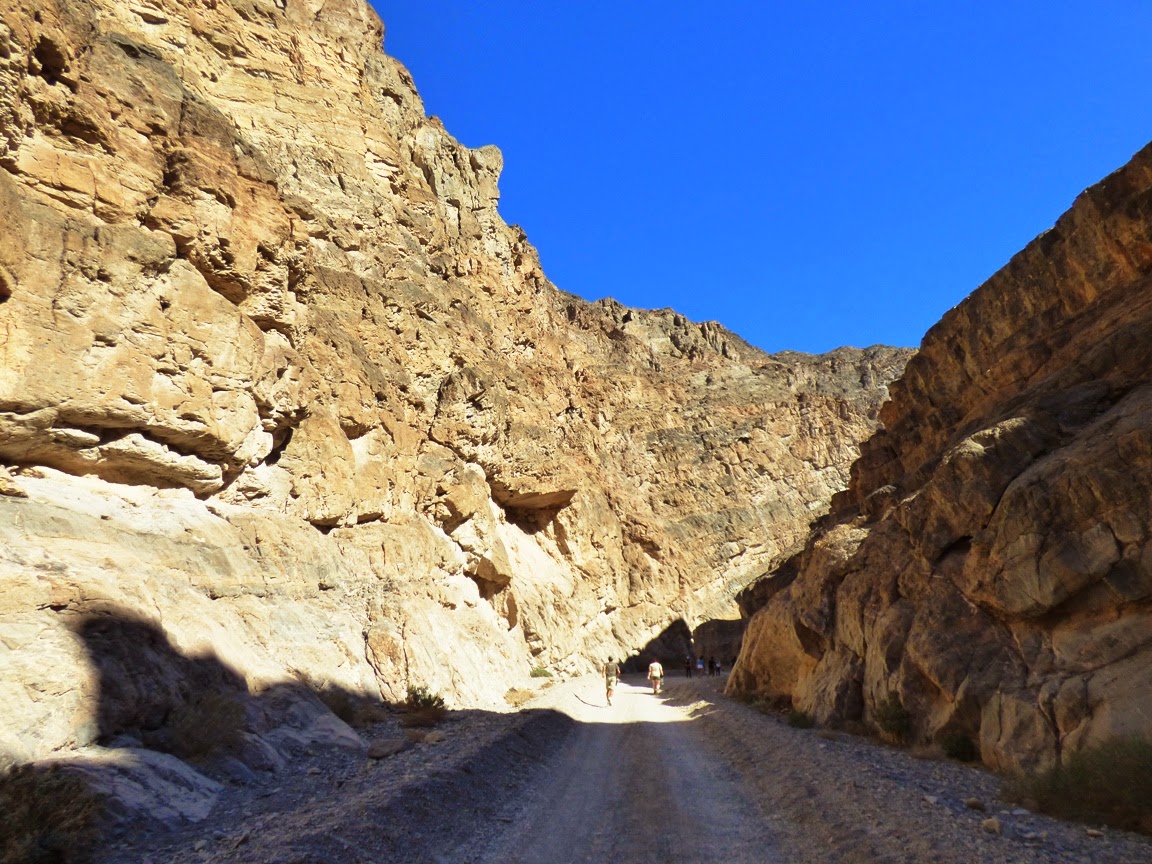 We did just that on our February visit to the Valley of Death and started hiking up canyon. In places the canyon is only 20 feet wide with vertical walls. Evidence of severe floods was evident everywhere in the form of smooth polished surfaces and pockets of debris tens of feet up on the canyon walls. 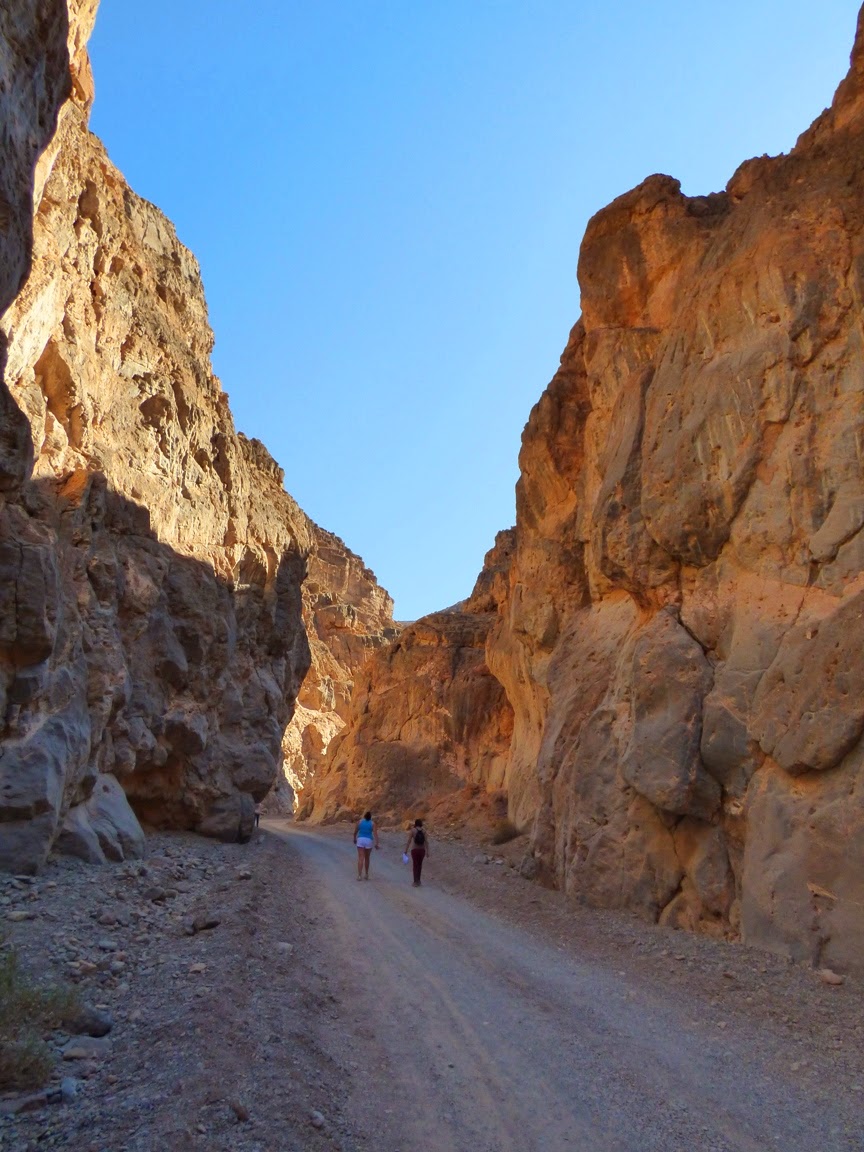 The Bonanza King Formation is mostly composed of limestone or dolomite, a carbonate rock that was deposited in warm shallow water in Cambrian time just over 500 million years ago. This was not long after complex life forms first appeared on the planet, and the fossils found within the formation reflect the strangeness of the time. Most of the hard-shelled creatures were a type of arthropod called a trilobite. They resembled a cross between the Horseshoe Crabs found in today's seas, and the roly-polies that can be found in your backyard.
The trilobites were extremely diverse, filling many environmental niches in the early Paleozoic seas, and they lasted for several hundred million years as a group, but by the end of the Paleozoic era they were extinct, losing out in competition with other arthropods like crabs or lobsters. Some good samples can be found in mountain ranges east of Death Valley National Park. 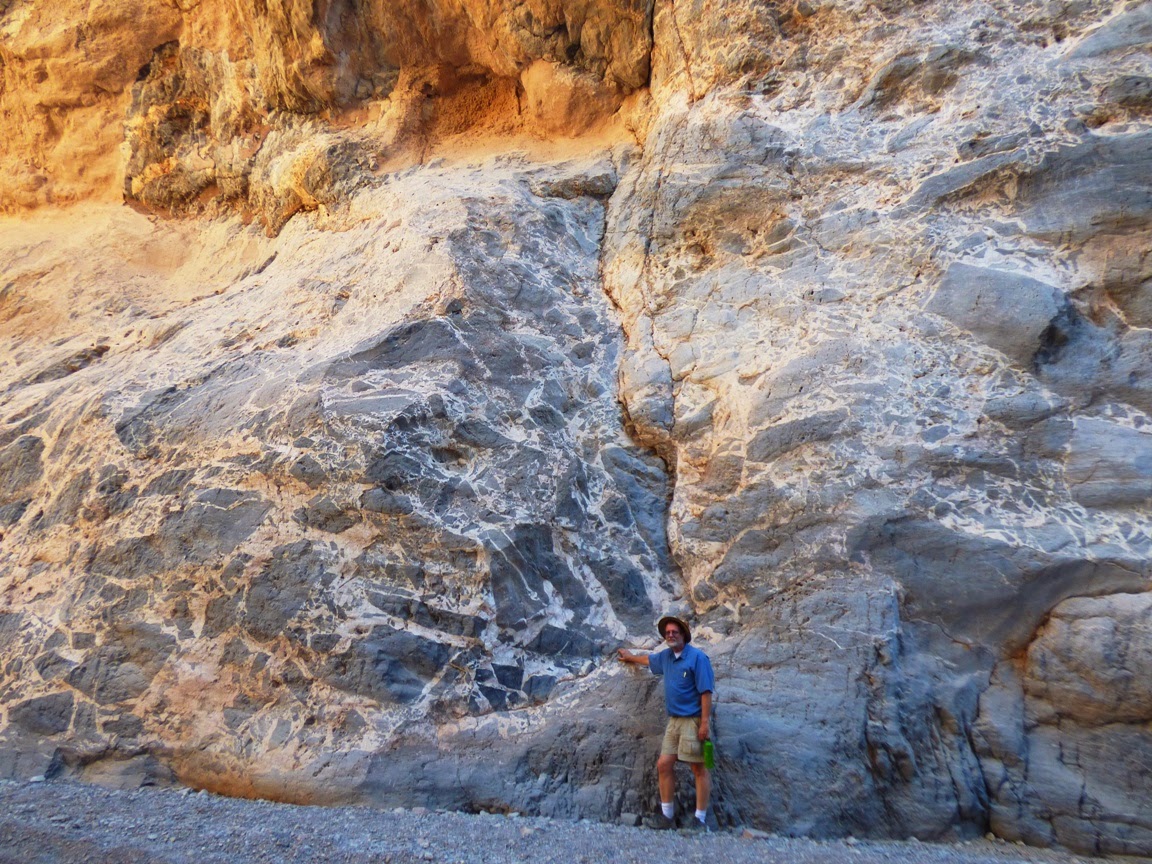 A mile or so up the canyon one encounters a creepy old guy standing next to the rock a fascinating exposure of broken up limestone called a megabreccia. It looks like evidence of severe geological mayhem, but was probably the result of slowly evolving deformation and cracking of the rock over millions of years of incremental folding. As cracks in the rock slowly widened, they were filled in with calcium carbonate carried in the groundwater. 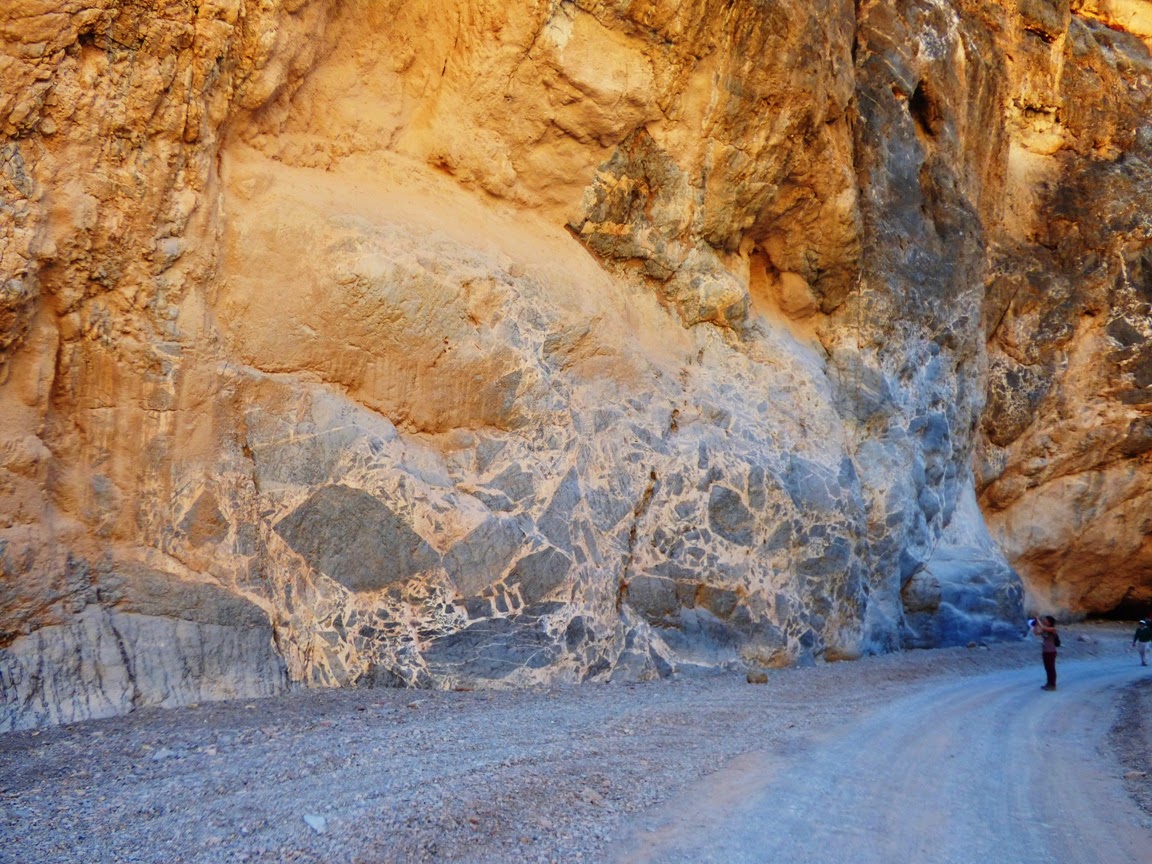 In the photo above one can see the efficient manner in which flash flooding has kept the outcrop clean and visible. There is a tight turn in the canyon just downstream along with an alcove produced by mudflows impacting the canyon wall and making a sharp right turn. 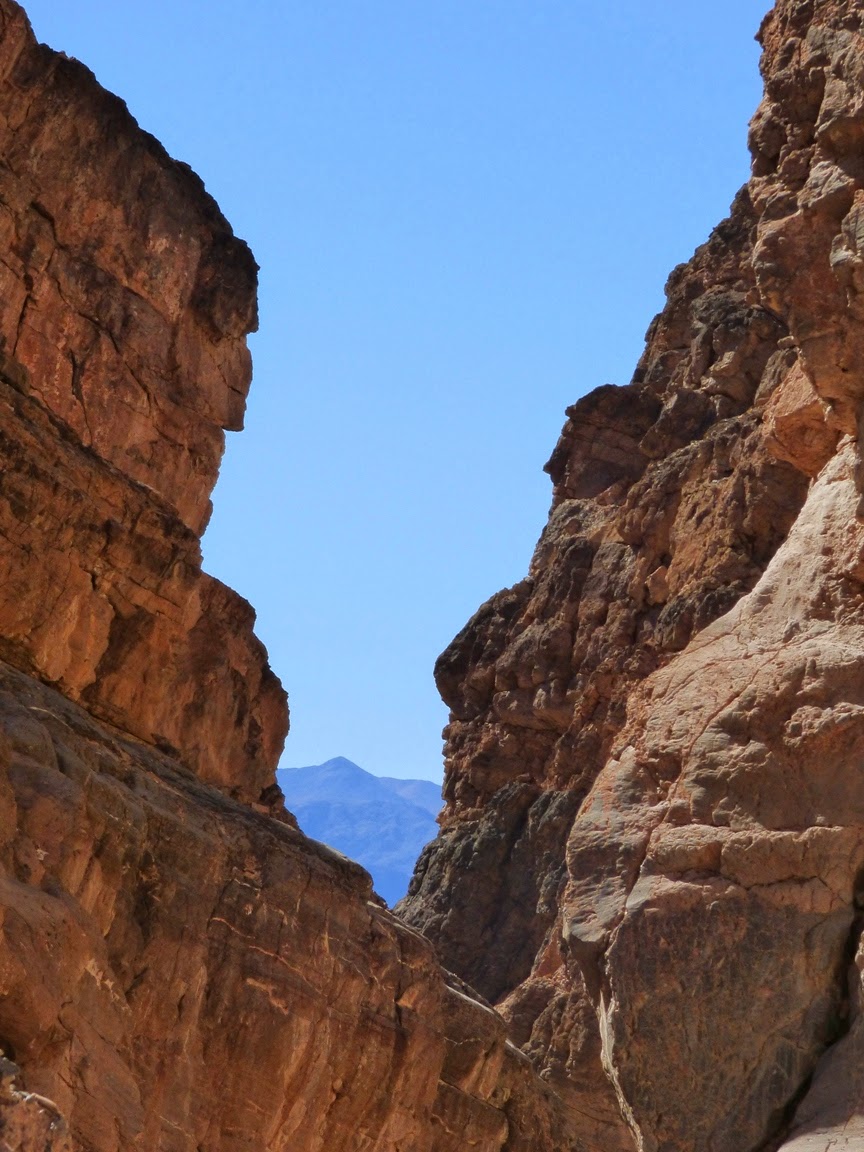 We started back down the canyon taking in the incredible sight of the Cottonwood Mountains through the narrow slot canyon. It's a fascinating place to explore. As we emerged from the canyon onto the top of the alluvial fan for Titus Canyon, we had a wide-ranging view of northern Death Valley, with the Panamint and Cottonwood Mountains in the distance with the Death Valley dunes on the valley floor. 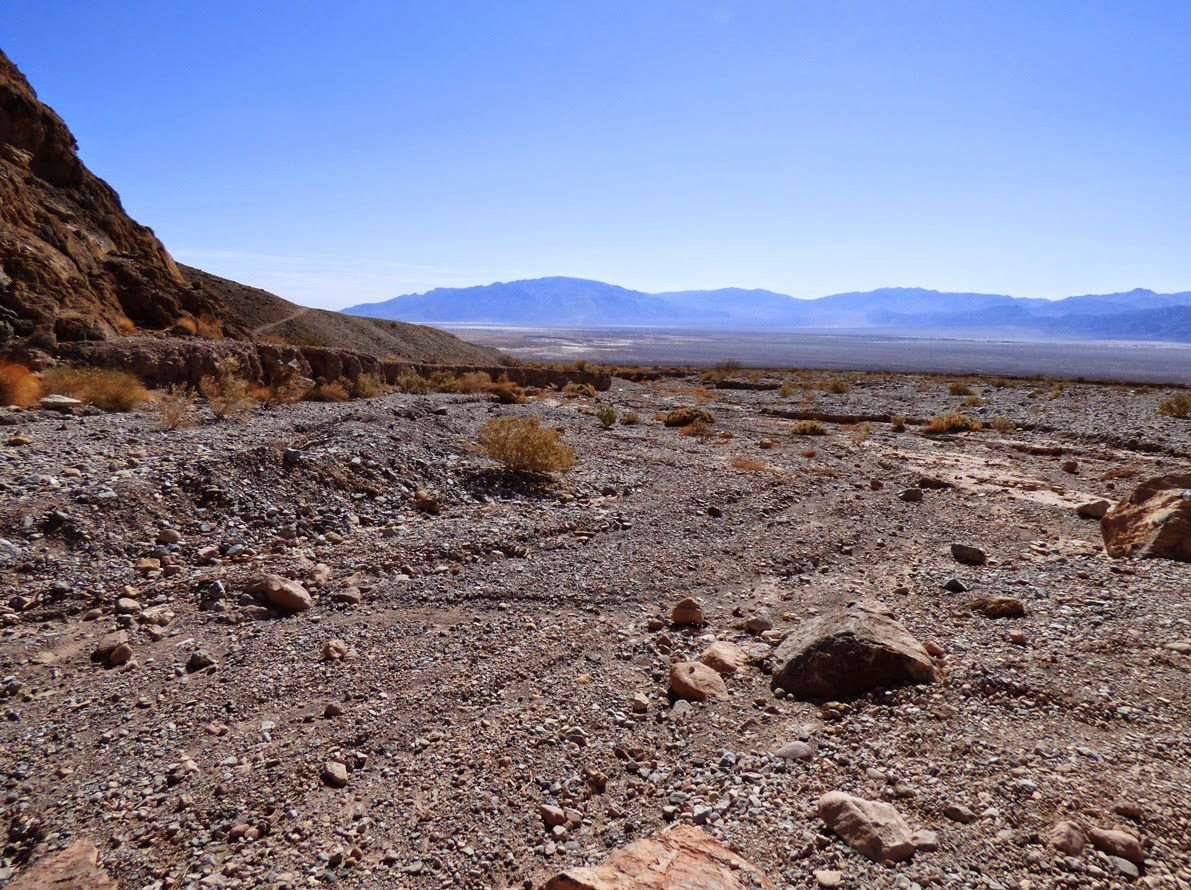 We got back in the vans and headed towards the Black Mountains. We were about to encounter Dante's View...
Posted by Garry Hayes at 4:46 PM

Forgive my artistic geology license but I predicted the upside down mountain would be the valley itself, having been filled from the sediments of the surrounding mountains. Oh well.