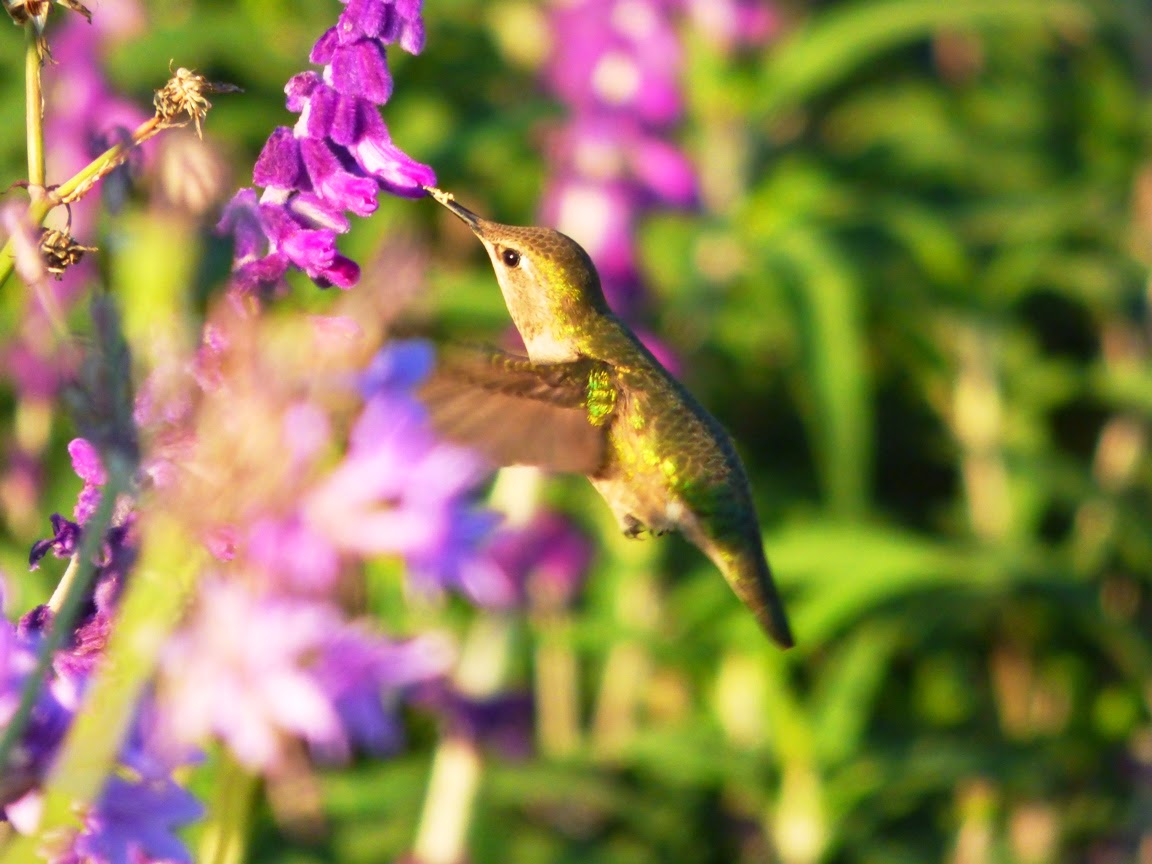 I admit I've taken artistic license, in that I took this picture of a busy hummingbird on the same day, but by the time I took the shot, I was two hundred miles north in the parking lot of a Black Bear Diner in Tulare, California on my way home. But it sure catches the eye, doesn't it? 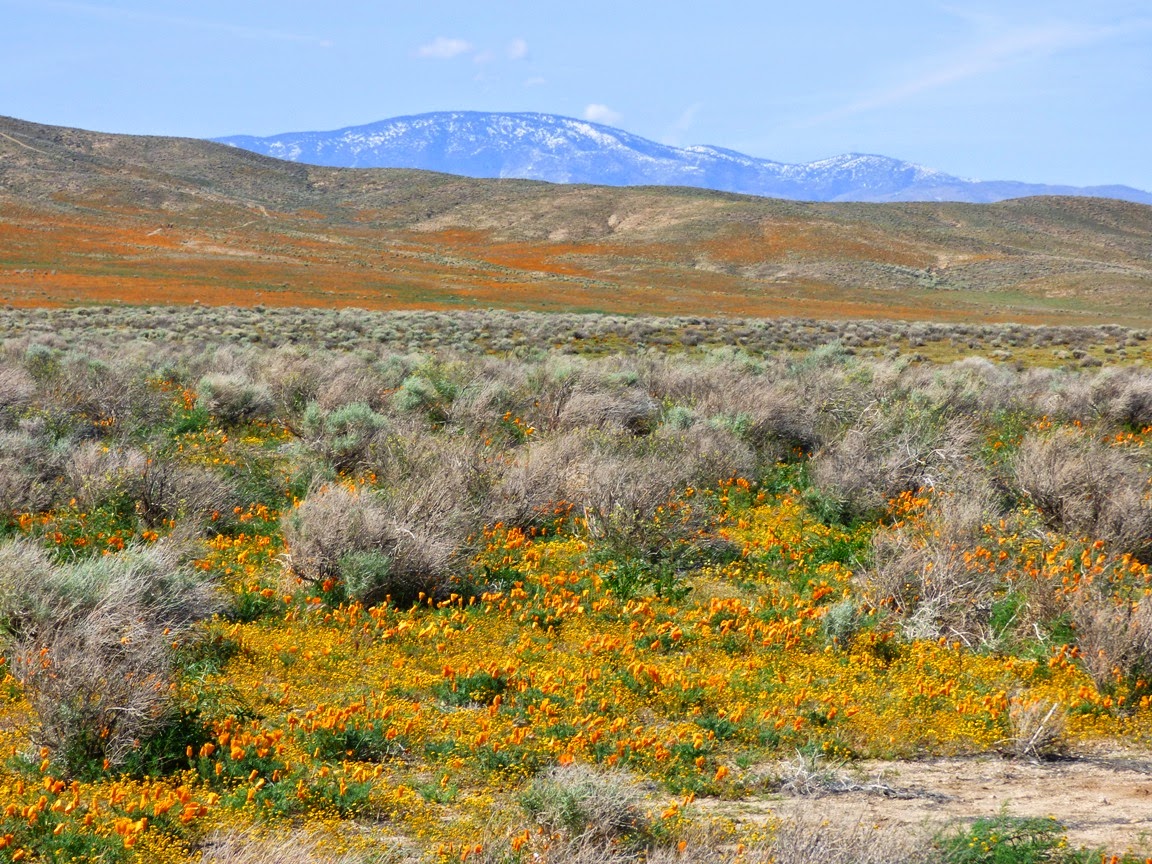 We were in Southern California for the wedding of my god-daughter this last weekend (have a great life Megan and Richard!), and I must say they picked a good time to give us an excuse for hitting the road. On the way home we made our way along the San Andreas fault from Cajon Pass to the Grapevine, hunting for earthquakes, and hoping to see some colorful wildflowers, despite California's crippling drought. A drought, yes, and a huge water deficit, but we had a few good storms roll through the state in the last few weeks, giving a boost to the wildflower season. 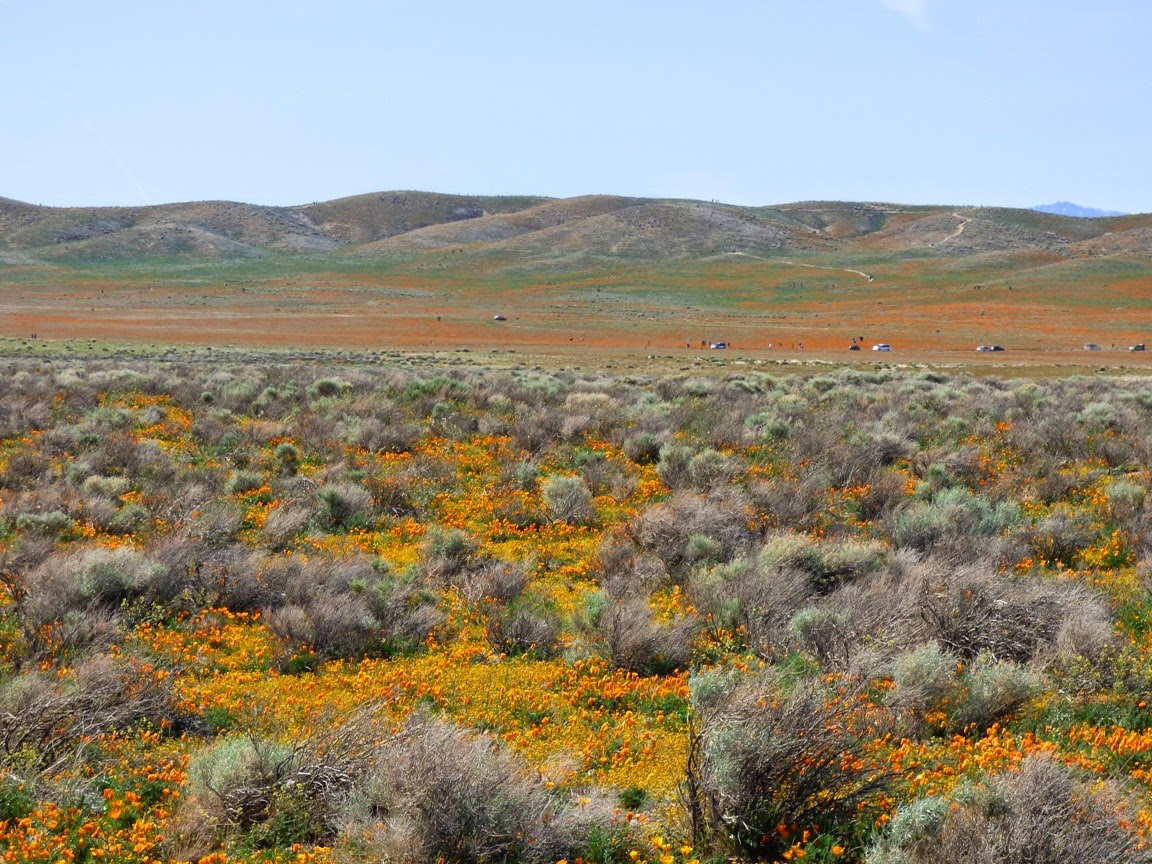 We took a chance and headed out the Antelope Valley California Poppy Reserve to see if the poppies were blooming. They were. They are certainly a bit more limited in scope than in wetter years, but they formed a beautiful golden carpet across the desert floor. They were also mostly closed up in the fierce wind that was blowing through the area in the aftermath of the storm. The poppies are natural, but exist here for an unnatural reason, a topic I discussed back in 2010 in this post. 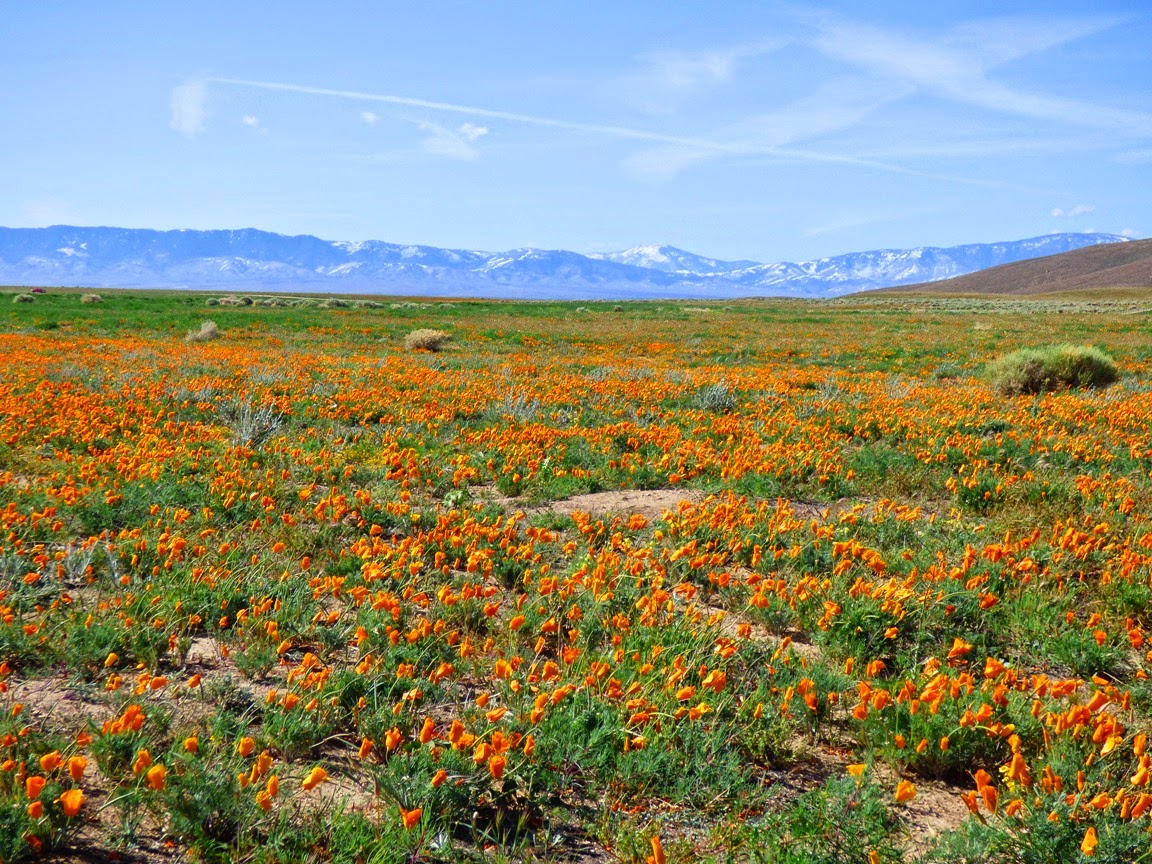 In that post I described how.the flowers are a natural phenomena, but a natural phenomena with a very human influence. About seven miles west of the Poppy preserve there is another state park: Arthur B. Ripley Desert Woodland State Park. The park preserves 580 acres of what turns out to be the native land cover of the Mojave Desert west of Lancaster and Palmdale: juniper woodland and Joshua Trees.

A century ago, this high end of the desert was cleared of Joshua Trees and Juniper, usually by chaining (dragging a huge chain between tractors that knocked down whole forests) or fires in order to put in thousands of acres of alfalfa fields and other crops. Large areas were reserved for sheep and cattle grazing as well. The natural plant cover was long gone. Much later, some of the abandoned fields started to recover, and the showy wildflowers are the pioneer species that are the first to recolonize disturbed lands.  Joshua Trees can no longer recolonize the valley floor; they don't have any method to spread their seeds widely (Joshua Trees were once spread in giant ground sloth poop...). Despite their incredible beauty, the wildflower displays are a monument to our extensive alteration of the environment that once existed here.

Many of the agricultural fields have been abandoned for lack of water and other economic reasons, but our utilization of the desert for our human needs continues. Notice in the picture below the huge windmills in the distance, and what I think is a large solar array. 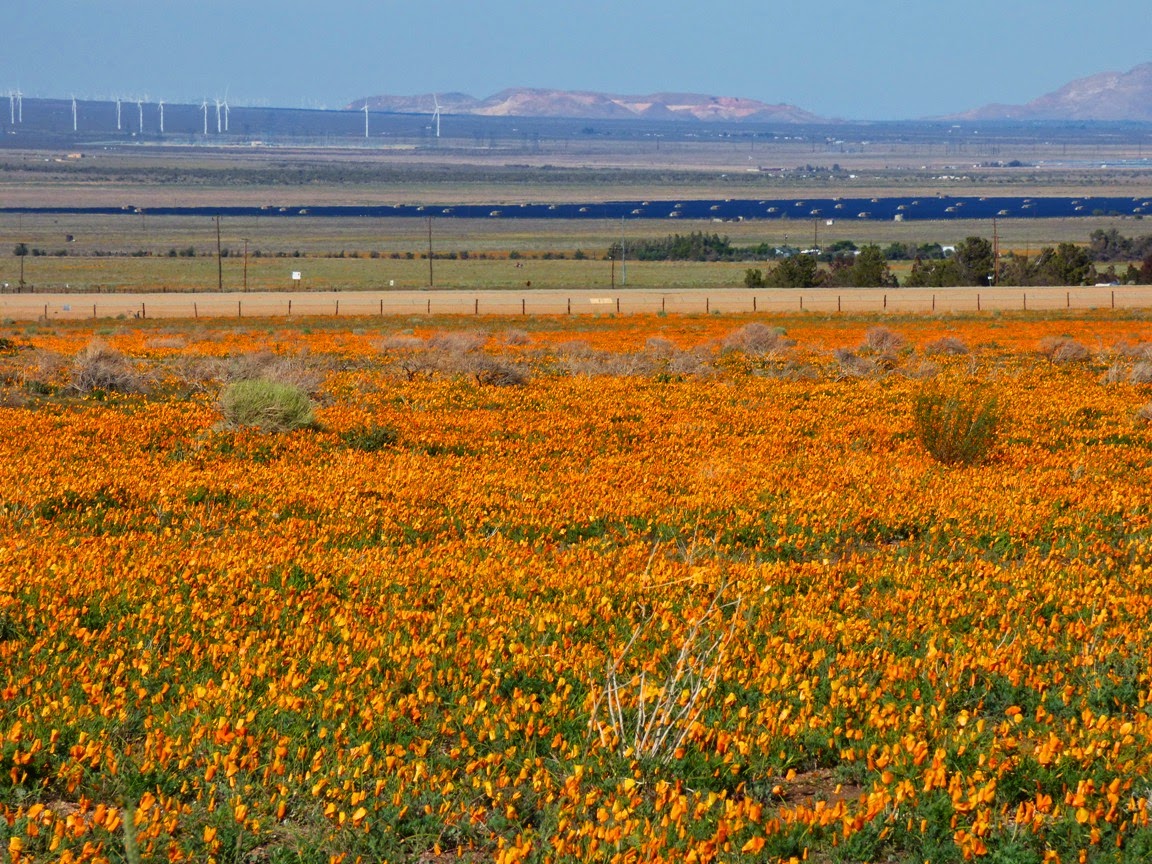 After taking in the beautiful fields of California Poppies, we headed west along the San Andreas fault to Highway 138 and the Gorman cutoff. Suddenly the hills were alive again with what looked like the beginning of a nice blooming of lupines and some kind of yellow flower (we didn't have time to stop and investigate closely). 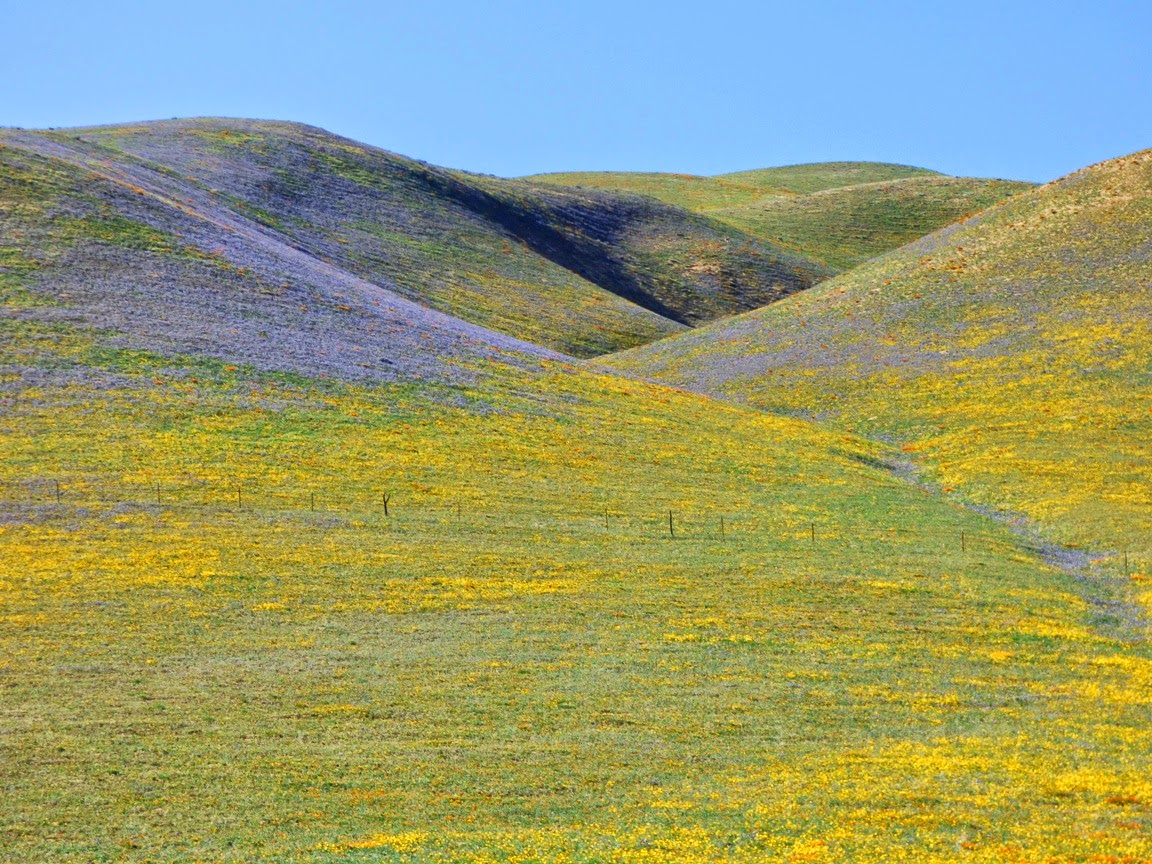 I imagine that in a week or so this will be a true wonderland of color, especially after the weekend dousing by the short but intense storm that rolled through California. The storm was too late to do anything about the drought, but it brightened the world just a little before the summer heat sets in. 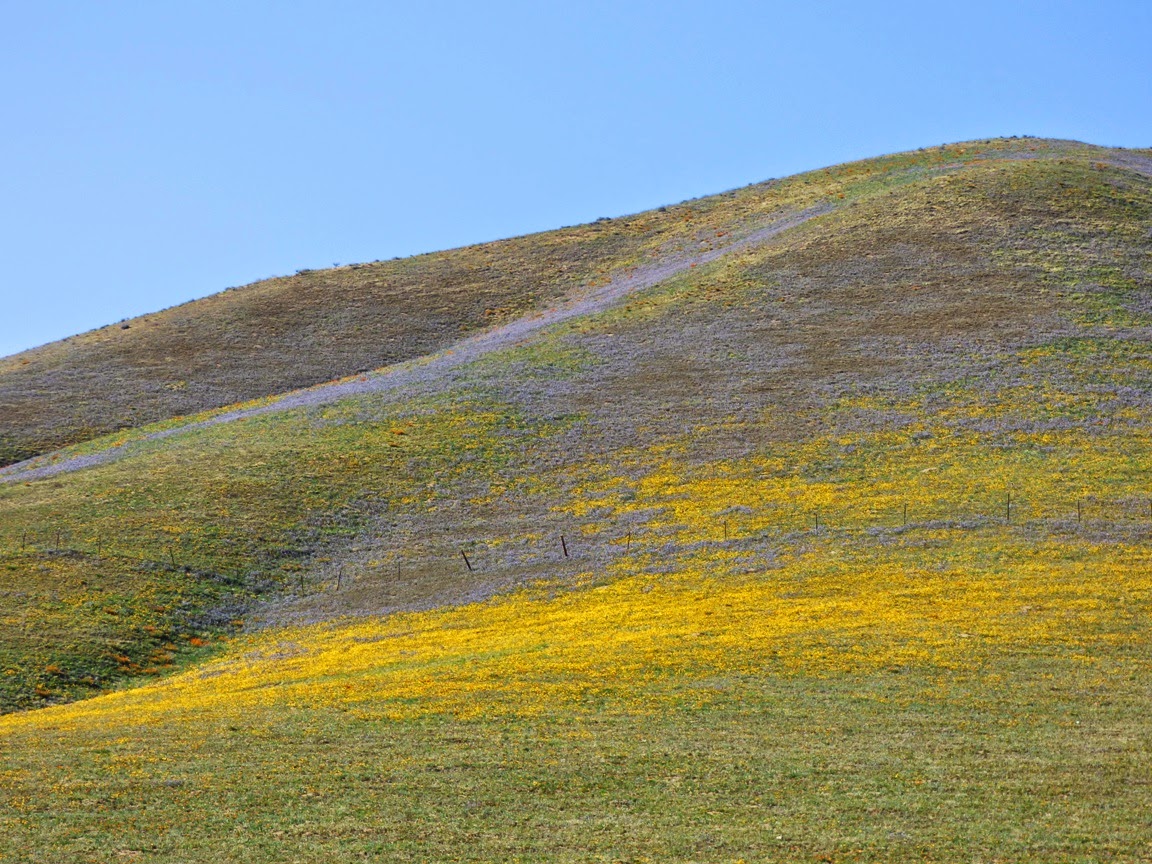