Where are the Ten Most Incredible Places You've Ever Stood? My Number 10: The Alaka'i Swamp on the Island of Kaua'i 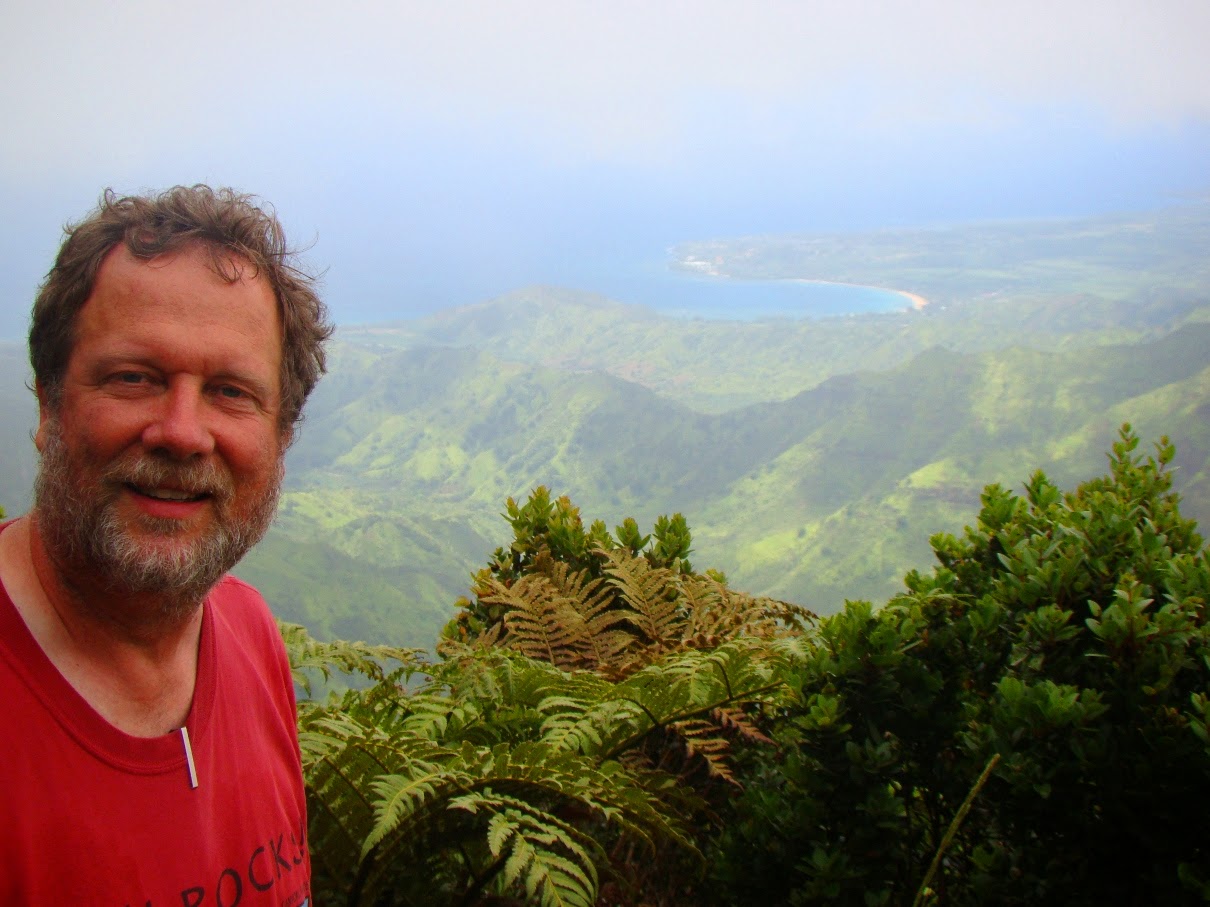 It is Earth Day 2014, which seems as good a day as any to start a new series about ten of the most extraordinary places on Planet Earth, as based on my own personal experiences. Everyone has such places in their memories, and I encourage you to add your most profound experiences in the comments or on your own blog if you have one. Mine aren't necessarily the most extraordinary places in the world, seeing as how I haven't and will never see every such place, but that's why I want to hear from you. We only have so much time on our beautiful planet, and I'd like ideas of where to head next!

My list is not in a precise order. Listing a favorite among these is tantamount to selecting which of my children I love the most. I am saving my most precious for number one, but aside from that, these are all equally incredible. I've not made any rules about these sites; some required long hikes, others I drove to. Some are all about the geology, some are about other things.

So what is this place today? It's cold, it's wet, it's made up mostly of waist-deep mud, and basically the last kind of environment that one would ever thinks exists in the state of Hawaii. Where are the palms and sandy beaches? 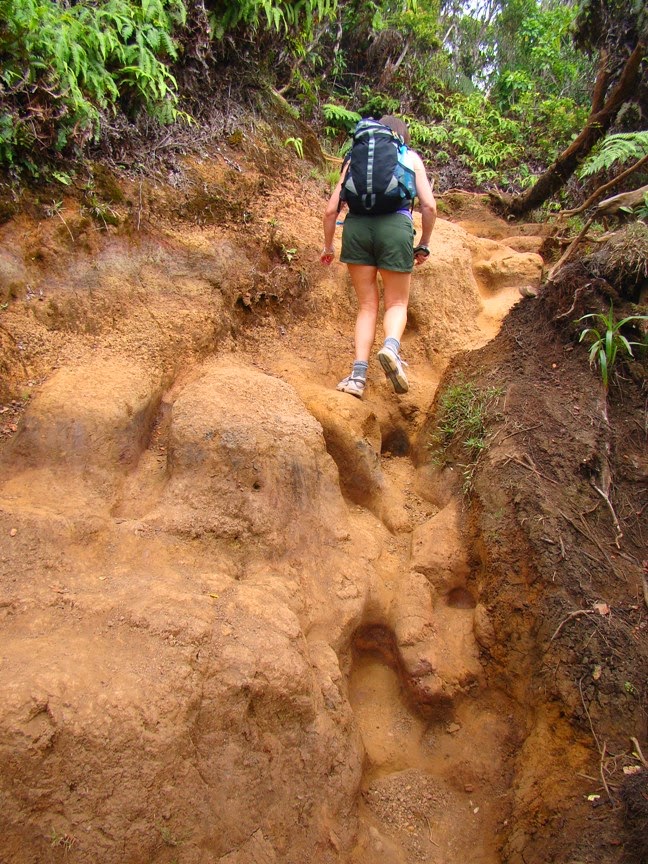 On the island of Kaua'i, some of the preconceptions of Hawai'i fall by the wayside. There are numerous examples of iconic coral sand beaches and offshore reefs. But there is also a deep gorge that has been called the Grand Canyon of the Pacific (Waimea Canyon), which almost made my top-ten list. But there is a region on the island that is practically unique to the world: a high altitude swamp and rainforest complex that is one of the wettest places on the planet. It's called the Alaka'i Swamp, and it is part of the Waialeale Plateau, a place where the average yearly rainfall is close to 40 feet. In 1982, 683 inches of rain fell. That's 57 feet!
So much rain falls on the high plateau that plants can't grow into mature forests. Some areas only seem to grow moss.  The mud is so deep that one has to wonder how one can explore this strange environment without getting hopelessly stuck. Luckily the state of Hawai'i has seen fit to construct a boardwalk that on the one hand provides safe passage for hikers, and on the other keeps people out of sensitive areas of the plateau. Because it's not just a strange environment. It's also one of the last stands for the native species of the Hawaiian Islands.

The native birds of the Hawaiian Islands provide a laboratory for the study of evolution no less significant than Darwin's Galapagos Islands. But the birds are under siege. Numerous invasive bird species came with the humans, along with wild pigs, mongooses, and malaria-bearing mosquitoes. Few birds seen by tourists are actually natives. The natives survive mostly at elevations above 3,000 feet where the mosquitoes can't thrive. Of the original 71 known species of birds on the Hawaiian Islands, 24 are extinct, and 32 are severely endangered. They've lost out to competition, habitat loss, disease, and predation (by the mongooses, which are as common as squirrels in the urban parks on the islands). Mongooses were never introduced on Kaua'i, so the higher parts of the island are the best places to see the rare natives like the 'Elepaio in the picture above (other birds are much rarer, but this was the only one I saw on my hike). 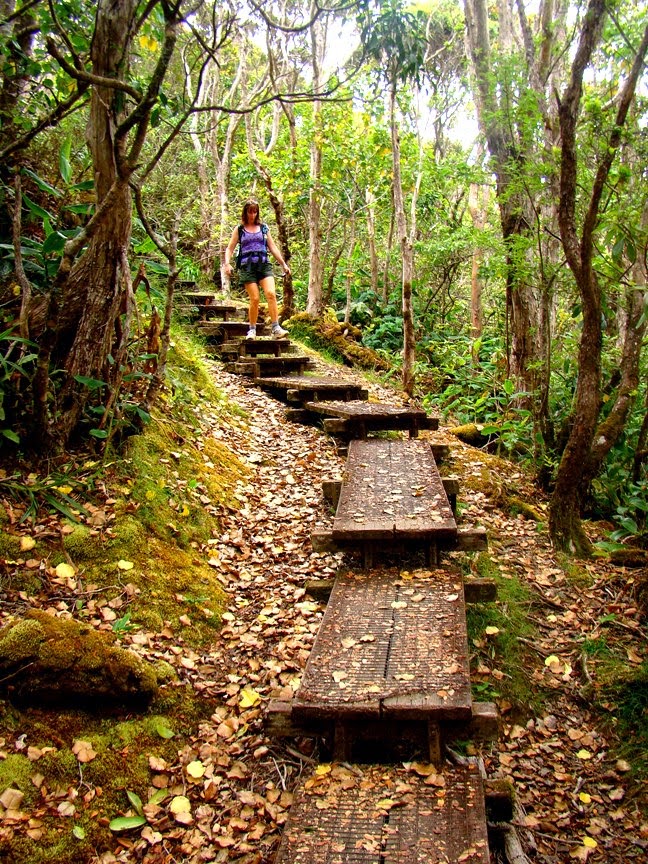 In 2009 I had the privilege of hiking the 5 mile trail (one-way) to Kilohana Overlook. It was one of the great adventures of my life. The trail began at the Na Pali Overlook and parking lot. The first mile was on a usually closed paved road to a second overlook. After that it was up and down on some potentially muddy trails, but we lucked out and didn't get rain that day. Eventually we were walking through the deep 'Ohi'a forest.

'Ohi'a trees are endemic to the Hawaiian Islands, and are one of the most adaptable trees on the planet, capable of growing on barren lava flows in near-desert conditions at sea level to cold, almost alpine conditions at 8,200 feet. The trees have beautiful red flowers that look like small red fireworks exploding from the branches. 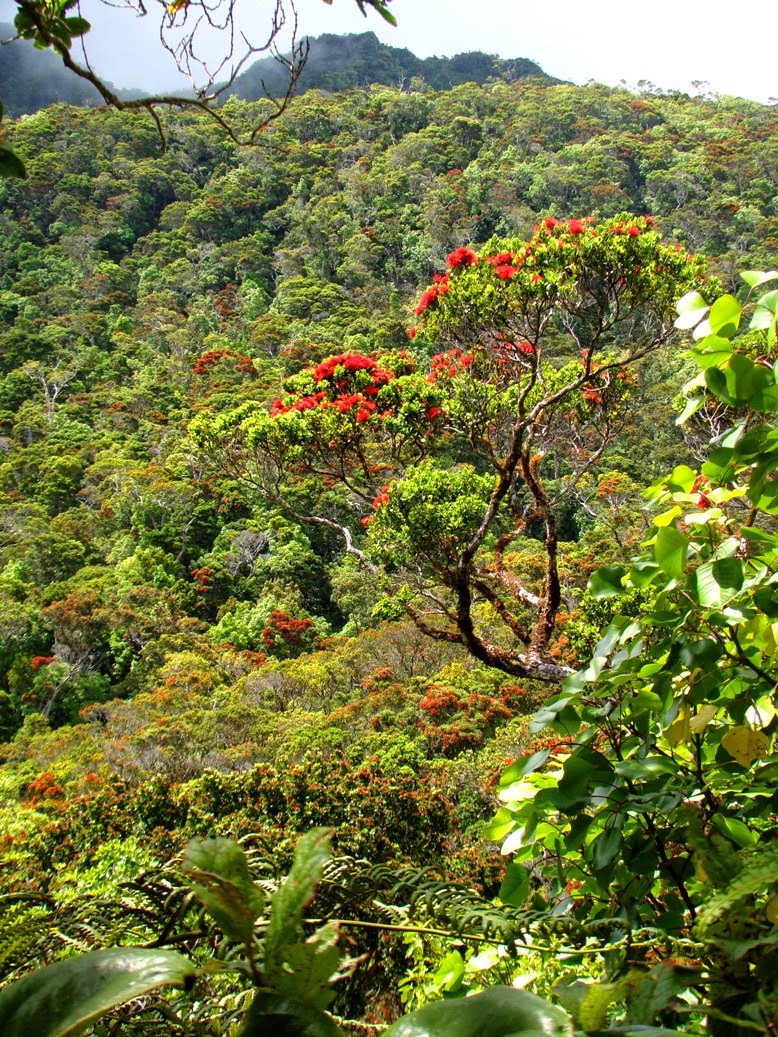 The flowers are called "Lehua", and they figure prominently in Hawaiian mythology. The tree was a handsome young man, 'Ohi'a, who spurned the attentions of Pele, the volcano goddess. He was in love with Lehua instead. In a fit of anger, Pele turned the young man into a tree, but later repented and adorned the trees with his beautiful lover, the Lehua. 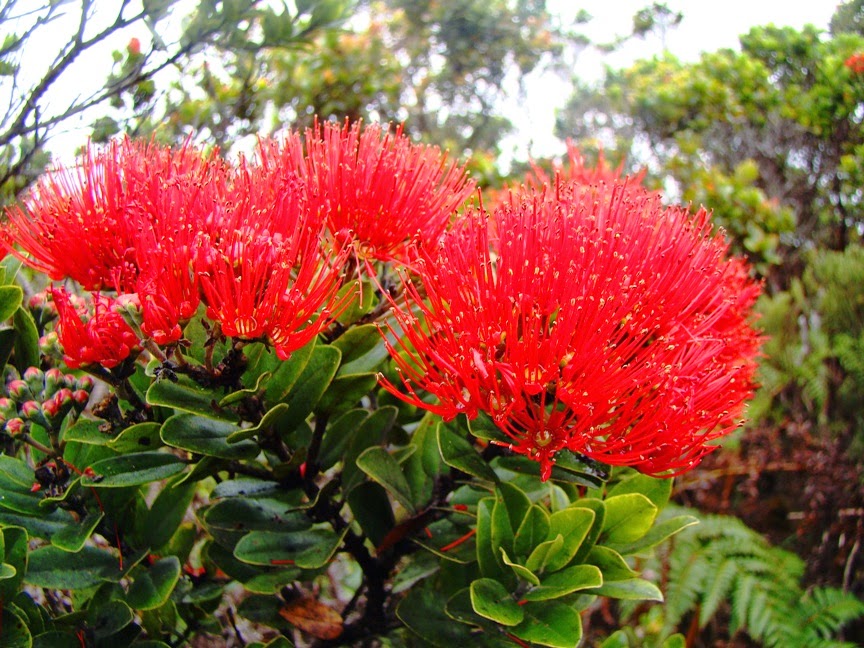 When we climbed onto the high plateau, it got...weird. Just low brush and ferns, with mud everywhere. We were fortunate the rain wasn't pouring on us by this point. 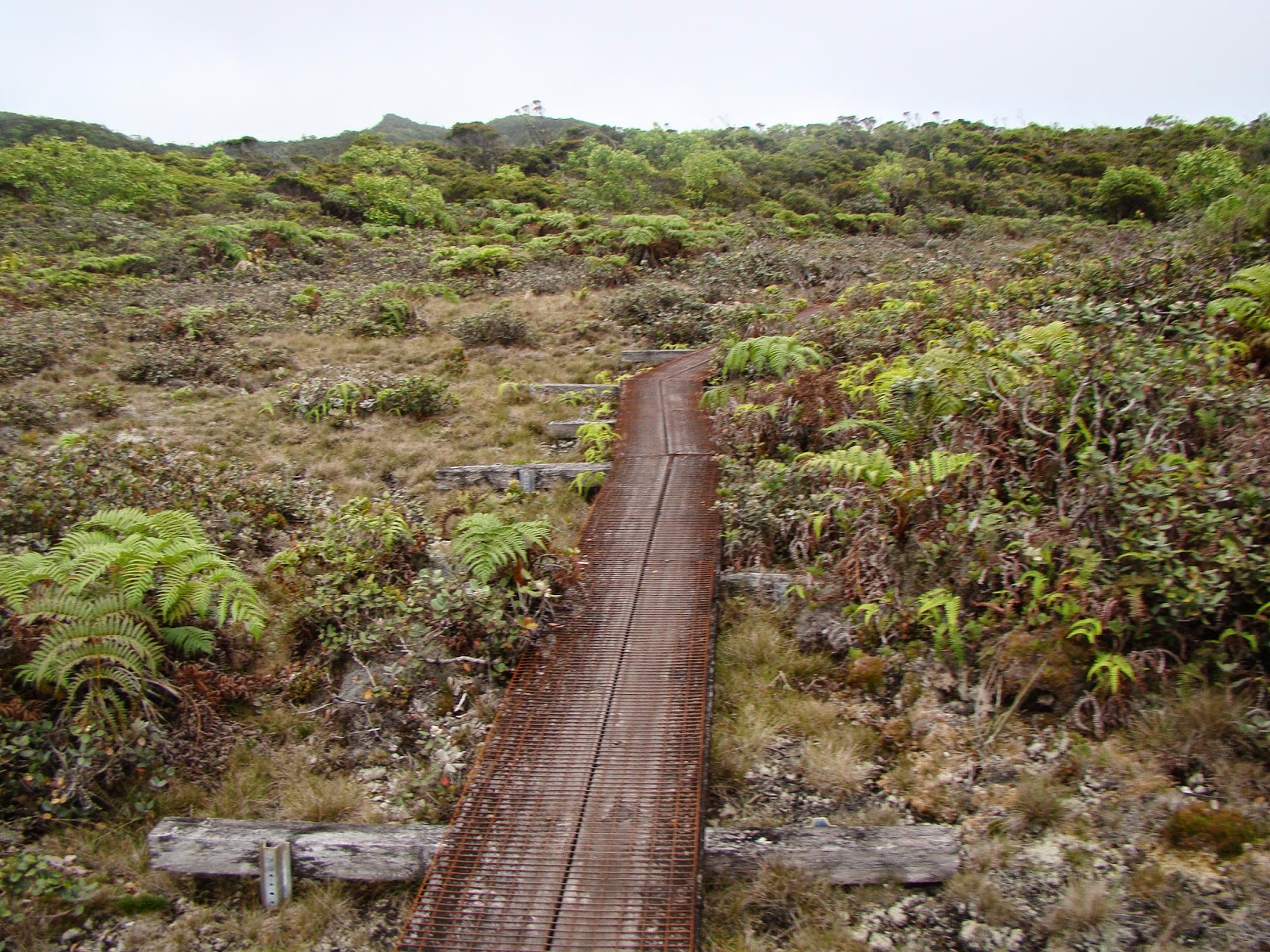 In the distance on this extraordinarily clear and sunny day, we could see the slopes leading to the high point of the island at Mt. Waialeale. Part of me wanted to leave the trail and explore the strange wilderness off to the south, but I knew I would be up to my knees or worse after the first few steps. We kept to the trail! 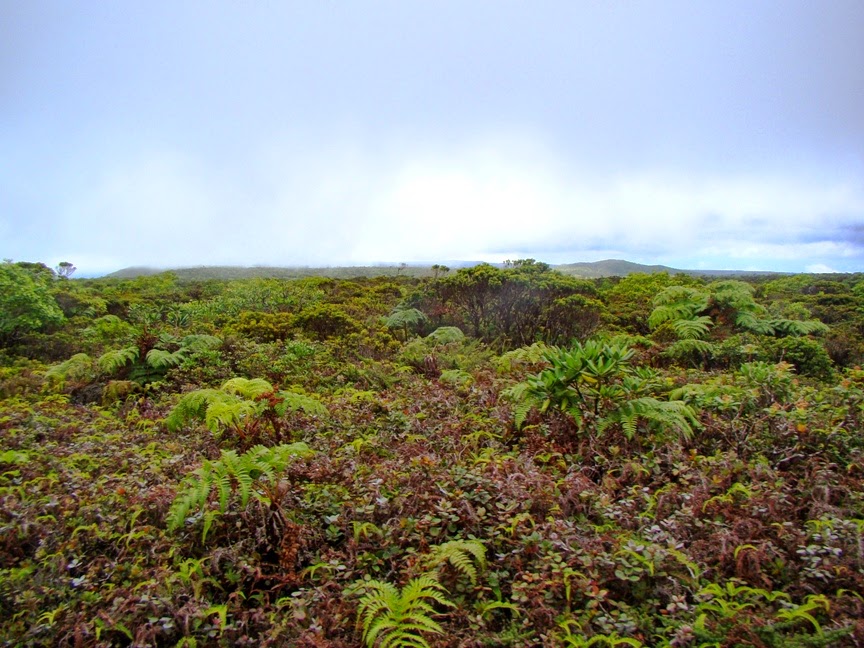 Mud was now everywhere, enough to creep us out a little. This is an environment almost entirely alien to humans. We were now getting close to the end of the trail at the Kilohana Overlook. It's not a good idea to have the view from the Kilohana as an ultimate goal for hiking the trail. Most of the time, the overlook is bathed in clouds. I hiked to the edge and looked into the abyss below. 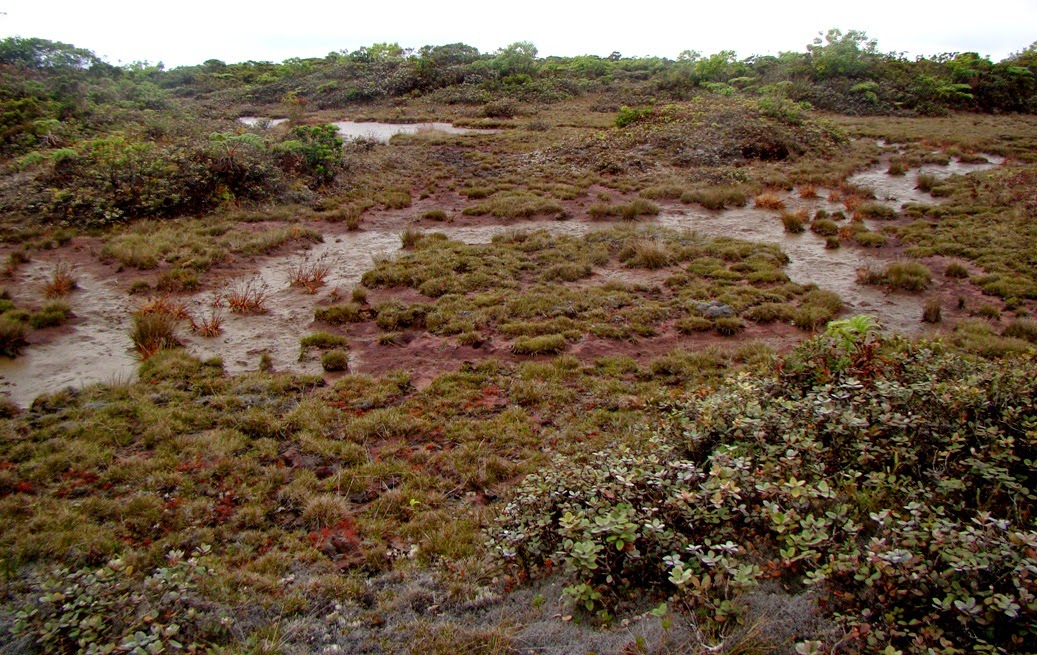 It was clear! We could see deep into the canyon of Waihina River gorge. I don't think I've ever seen more inaccessible slopes. Impenetrable slopes choked with rainforest vegetation, and not even a hint of a trail. Leaning over the edge, it was hard to tell where the soil ended and the vegetation began. 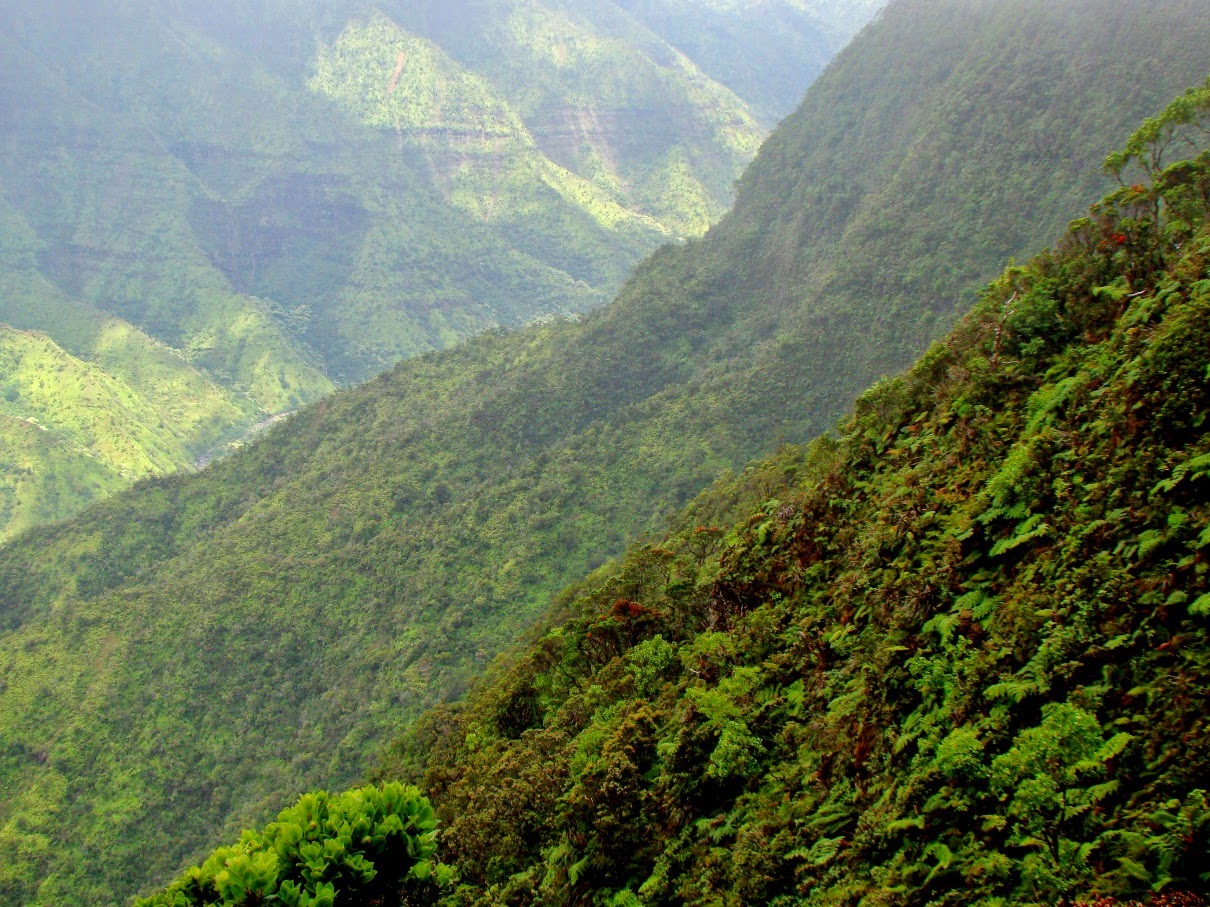 Down in the distance was the gorgeous bay of Hanalei, 4,000 feet below us. We were at the top of the Wainiha Pali (cliff) in one of the prettiest places I had ever seen.

The skies were fickle, though. Hardly ten minutes passed by and the clouds closed in for good. Some of our party arrived a few moments later and never saw a thing. It was okay though. The overlook was icing on the cake for the strange beauty of a hike through one of the strangest worlds I had ever seen. 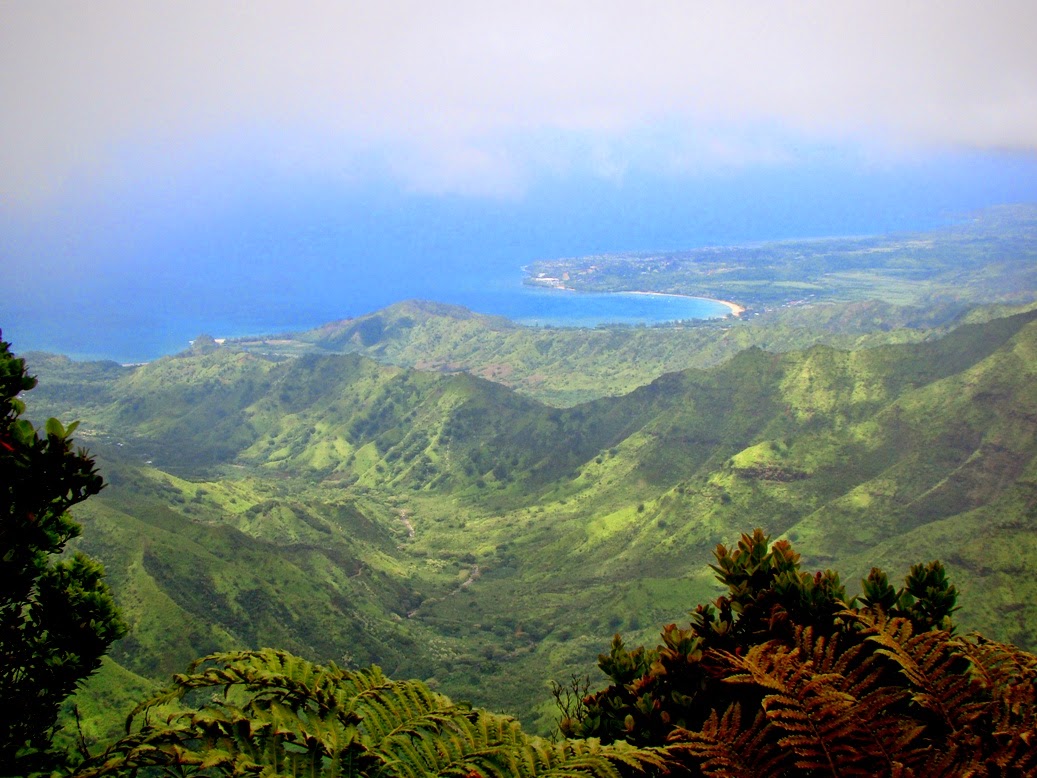 This sounds like an awesome and magical environment. I can understand the conflict of wanting to get off trail but not stuck in the mud. Lucky you also getting the view.

Right off the top of my head, my most extraordinary places would be: Toroweap, CA Redwoods, Drakensberg Mts, Kruger and Tsitsikamma National Parks (last three in South Africa). I may have to use this idea.

Those sound like some great spots. I've been to some of Charles' Hawaii spots, but I haven't been to the Wave yet, nor in the Fiery Furnace, just the outskirts. Haven't heard of Chesler Park, tho I've been to Canyonlands a lot. And Gaelyn, I need to get to South Africa!

I did venture off the boardwalk, having heard of the incredible mud... and yes, in some places it was only knee deep, but once, I took ONE step off and BLUP - I was up to my shoulders and could feel no bottom! (You DO float, if not carrying a huge backpack) It was SO FUN! Staged a few adventure picts of my sister "rescuing" me from the "quicksand"! I think you could swim out, though... no suction or anything. there were two spots of mud on my ankles, though, that didn't wash off for 2 weeks - a souvenir! If you want to try this, I advise taking off your shoes first, wear old swim clothes that you don't want to keep clean, and have a buddy there ...just in case! ;) But what an adventure!