Under the Volcano: Changing the Emphasis -Part 9 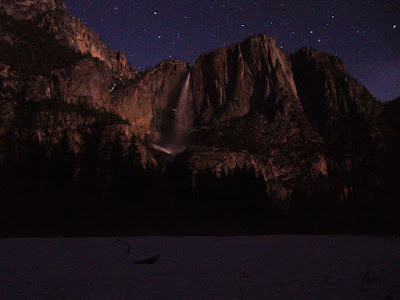 I kind of started this photo-essay about Yosemite Valley by promising myself that I wouldn't be showing the hundreds of pictures that I've taken of the most familiar sights in the park, like El Capitan, Half Dome, and Yosemite Falls. They've been photographed literally millions of times, and it takes some originality and creativity that I don't have as a photographer to make the views unique. On the other hand, I had an extraordinary night in January of 2005. I was staying at Yosemite Lodge for the first time ever on a nice mid-week discount rate through the Yosemite Association. We couldn't sleep, and I knew the moon would be rising at 11 o'clock or so, and so we got in the car and saw Yosemite Valley the way few others do...in the dark on a frigid winter night under a nearly full moon.

The camera I had was not versatile enough to allow the spinning of the stars, but a 30-second exposure was enough to bring out the ghostly details of Yosemite Falls with a star-studded sky above. No particular aspect of geology to discuss today, aside from pointing out the fact that we live in an extraordinarily beautiful world, a single unique planet wandering through the cosmos. It is a place of wonders.

It was cold, I was shivering, but there was not another soul moving on the valley floor that night. We had the entire place to ourselves. How many times will that ever happen in this lifetime?
Posted by Garry Hayes at 12:48 AM