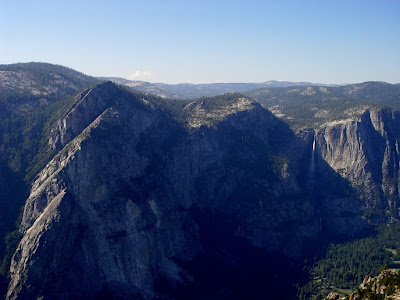 Today, the view from the edge of the abyss (again from Taft Point) is to the north, towards Three Brothers and Yosemite Falls. Jointing plays a prominent role in the scenery of this view, both in the diagonal joints that form the western slope of the three spires of the Brothers, and in the horizontal joints that provide the two steps to the falls of Yosemite Creek. The rock on the right side of the Brothers is the Sentinel granodiorite, described earlier here, while the rocks on the left is the El Capitan granite, described here.

Jointing occurs as removal of the overlying rocks by erosion releases pressure, and the rock expands and fractures. It provides an avenue for water to enter the interior of the rock face and start the chemical weathering process, leading to the loosening of the boulders in the cliffs. The Three Brothers, with their intersecting joint sets, are a constant rockfall hazard. The white scars are recent slides and falls, including the 1987 Middle Brother slide, which with an estimated volume of 600,000 cubic yards, was the largest historic mass wasting event in the valley. Luckily, the National Park Service had closed the road below in anticipation, and no one was injured in the event. Other rock falls have produced injuries and deaths, including on the nearby trail to the top of Yosemite Falls.

Taft is a great, easy stroll. For my money, the highest payoff/exertion ration in the park!

Below are my friends' attempt to make it into the next edition of "Off The Wall: Death in Yosemite"

So, Chuck has a question - are the Mesozoic Peavine sequence metavolcanic rocks the volcanic equivalents of the Sierra Nevada batholith? I said probably, at least broadly. Do you have any better references or knowledge than what I put in comments on my blog?