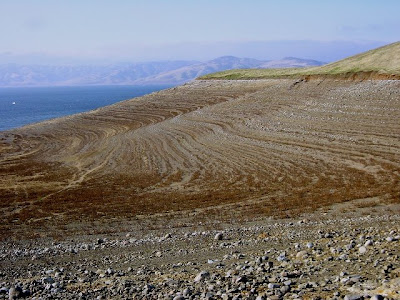 I have been rather brutal on climate change deniers, especially when we have a cold snap, and the letters start appearing in the op/ed section asking President Gore about where global warming has gone to, when it is freezing outside.
On the other hand, after the last three days here in Modesto, I've just got to wonder. We apparently have had a grand total of three hundred-degree days in May, ever (Update: illustrating the dangers of just writing what I thought I read somewhere, this is not right; the records probably referred to the particular day in May) In the last three days we have doubled that number, and two of those days exceeded 105 degrees, which broke the old records by six and seven degrees, respectively.
We have also experienced the driest March-April period ever. I think we got 0.02 inches in the whole two month period, when we would normally get 2 or 3 inches of precipitation. The snowpack, which had been very healthy across the state two months ago, is down to 60% or so of normal, so we are facing water-use restrictions.

I know that one drought year and hot conditions do not constitute climate change evidence. But it does direct the attention: California has too many people, and not enough water, even in a good year. And the water we do have is in the wrong place, up in the north state, and most of the people live in the south. We have spent billions of dollars on water transfer operations and on reservoirs. The effect of global warming will be stark: we won't get less precipitation necessarily (although it may be true in southern California), but more will come as rain, and much less will occur as snow, so runoff will occur sooner, and far less water will remain stored in the high country.
The officials who control these water systems know what is coming; it needs to be the job of the media and teachers like myself to make sure the public is aware, too. Sweating through a day like today definitely drives the point home.

The picture, by the way is San Luis Reservoir near Pacheco Pass in the Coast Ranges. It is a primary storage facility for water taken from the Sacramento River Delta that is destined for farms in the south San Joaquin Valley, and urban users in southern California. When the reservoir is low, it illustrates contour lines very nicely! The exposed rocks are shale, sandstone and conglomerate of the of the Cretaceous Panoche Formation.
Posted by Garry Hayes at 8:45 PM