Taking the High Ground: Yosemite as you (maybe) haven't seen it 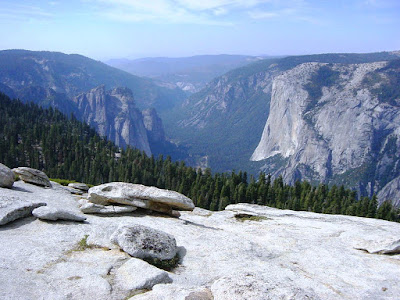 If the last few entries in the Yosemite series have left you with a fear of cliffs and steep drop-offs, I suggest today a slightly different point of view. Between Taft Point (7,500 ft) and Glacier Point (7,214 feet) stands the barren expanse of Sentinel Dome, which at 8,122 feet is one of the highest easily accessible points on the rim of Yosemite Valley. The normal hike (a bit over a mile) begins at the Taft Point parking area, although anyone who is savvy with a topographic map will note the presence of a service road about 2/3 mile northeast on Glacier Point Road that vastly shortens the hike (maybe a half-mile or less). Unlike the previous viewpoints, the exfoliated dome is set back from the rim, and although there is a short stiff upgrade at the end, there is no place to fall off of. The summit of Sentinel Dome seems to be an outlier of El Capitan granite, although it is surrounded by the granodiorite of Kuna Crest and the Sentinel granodiorite.

The view from the summit of Sentinel is superb, although it reveals little of the valley floor. Instead, it provides a sweeping view of the valley walls and the surrounding region of glaciated peaks, cirques, aretes, domes and cliffs. It stands only 700 feet shorter than Half Dome. It is visible from the classic view of Yosemite Valley, just behind the lowest of the Cathedral Rocks, and just to the right of Sentinel Rock.

Today's picture is looking west towards the portal of the valley, framed by the Cathedral Rocks and El Capitan. The granite that forms both of these edifices is mostly unjointed, and the glaciers that scoured the valley were unable to quarry deeply beneath the cliff faces. The sediment between the portal cliffs is only about 300 feet deep. At the upper end of the valley, in the vicinity of the stables and Stoneman Meadow, the sediments may be as much as 2,000 feet thick!

One may notice the near lack of cliffs beyond the portal formed by El Capitan and Cathedral Rocks. These are the Rockslides, and are composed of diorite of the Rockslides, which is Jurassic-Cretaceous in age, somewhat older than the other rocks in the valley. The rocks have been intruded by mafic dikes and joint more closely than other plutonic rocks in the valley, causing them to easily break down and form talus slopes. Roads built across this slope have been abandoned over the years due to constant rockslide damage.
Posted by Garry Hayes at 1:21 PM