Heck of a Trail! Exploring Off the Road in Zion 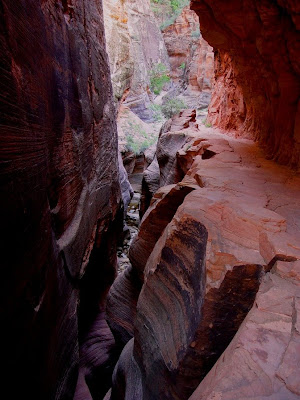 There are a great many beautiful sites in our parks and monuments that don't always make the travel brochures. The Observation Point trail in Zion National Park is one of those spots. It's a tough hike, but it lies near the top of my list of personal favorites. In the middle reaches, the trail levels off a bit and passes through a spectacular narrows section. The trail, for better or worse, had to be chewed out of the cliff along this stretch, given the tight squeezes in the canyon below (and probably the flash flood danger). It is a cool respite in the midst of a hot day.


The crossbedding in the Navajo Sandstone provided a natural separation point to quarry the trail out of the cliff. It is incredible to imagine the dune sea that existed here in Jurassic time. The desert even included oases, as indicated by small pods of freshwater limestone in between some of the dunes. Few bones have been found in the Navajo but numerous trace fossils have been found in the unit.
Posted by Garry Hayes at 11:14 PM